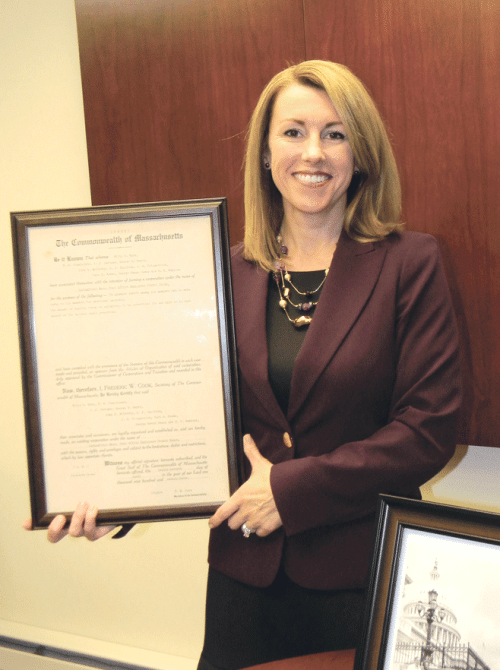 In her 30 years with PVCU, Anabela Pereira Grenier has seen assets rise from $2 million to $52 million.

Once a fledgling establishment operating out of a single post office room in 1923, Pioneer Valley Credit Union now runs five branches and offers a wide array of services and programs to its members.

Celebrating her 30th year with the institution, President and CEO Anabela Pereira Grenier has witnessed most of this growth just during her tenure. Since she started with PVCU, the credit union has increased its assets from $2 million to $52 million, in addition to expanding from 900 members to 7,500. It wasn’t always easy — especially during the recent recession — but PVCU has weathered the storm, she said, and emerged even stronger.

“We are the oldest operating postal credit union in the nation,” Pereira Grenier said of PVCU, which began as an institution exclusively for postal workers nearly a century ago. “It took a while, but once membership grew, we really took off.”

In 2008, right after the financial-industry collapse, PVCU officials decided to reach out to major Western Mass. employer groups in an attempt to stabilize business through a turbulent period. The decision not only provided an infusion of short-term momentum, but ultimately helped the member-owned credit union steer a course toward sustained success.

Baystate Health added PVCU as its credit union in 2008, followed by Westover Air Reserve Base. Later, Westfield’s Savage Arms and other prominent employers came on board, and the credit union now serves several other large companies and organizations, as well as federal employees in Springfield.

“We have increased our staff by more than 50% to keep up with the demand of the programs we offer,” said Trecia Marchand, vice president of marketing and business development. “Everyone is excited about the growth we have experienced. People know they can trust us when they see that these large employers have entrusted us with their most valuable assets — their employees.”

For Pereira Grenier and her team, the impetus behind every decision is member satisfaction. She said her staff understands the constraints of a challenging economy and strives to make it as easy as possible for members to navigate their finances, which has led to the creation of several innovative approaches.

For example, the CU on the Go Mobile Branch Solution was launched to enable members to use PVCU’s financial services at their workplaces. The project has been successful, she said, especially for people whose schedules don’t allow them to visit the credit union during normal business hours.

“When people see that their credit union is there to help them and provide services, they really appreciate it,” added Marchand, who has been with PVCU for eight years. “Employers don’t have to pay to offer this employee benefit. We bring the services to them — it’s a win-win situation for everyone.”

To ensure that members understand their options, PVCU has also developed a training system that elevates loan officers to certified financial life coaches. The certification process takes about one year, during which time loan officers learn how to familiarize members with financial practices and explain complex procedures in coherent, easily understandable presentations.

A session between a member and a financial life coach, Pereira Grenier said, is usually a one-on-one meeting tailored toward the member’s individual needs. From teaching people about their credit scores to analyzing how their budgets can be improved, the goal of every life coach is to help people save money and gain knowledge.

“We are very dedicated to financial literacy,” Pereira Grenier told BusinessWest, “and have invested a lot of time and money into training our financial life coaches.”

In a competitive industry, Pereira Grenier said, PVCU has tried to set itself apart through consistent, ever-expanding member services. For individuals looking to improve their homes’ energy efficiency, PVCU has partnered with the Mass Save Heat Loan program to offer 0% loans. And for members who step through the doors with a loan application, it’s possible for them to come out with a check in a half-hour or less.

To accomplish that goal, the PVCU staff processes everything in-house, with no outsourcing or external complications, improving efficiency and keeping members coming back for additional programs.

“When others are trying to take money away from people, we are offering services that put money back into their pockets,” Marchand said, noting that the credit union’s investor-rewards checking program pays eight times more than the national average for interest-bearing accounts of its kind.

Moreover, the credit union pays money on debit transactions and also provides members an opportunity to donate their cash-back rewards to charity. The institution has partnered with Baystate Health Foundation, the Children’s Study Home, and the Soldiers Home in Holyoke as charitable partners for this program. For members interested in participating, they can choose which charity they will benefit with their rewards. In addition, PVCU is engaged in a number of other charitable and community-outreach efforts, including an annual essay contest for seventh- and eighth-graders and college scholarships for high-school seniors.

PVCU also offers online banking, express banking, mobile banking, online information about financial coaching, and myriad other services and programs. It’s all about keeping up with technology and utilizing it in advantageous ways, Pereira Grenier says.

Speaking of technology, the credit union’s marketing team continues to employ everything from social media to radio ads to promote PVCU’s services. The staff also works closely with human-resources departments of member companies to keep their employees apprised of upcoming events and opportunities. Whether someone is buying a used car, applying for a student loan, purchasing a home, or simply trying to learn how best to manage money, the staff is always available to help members create a plan to achieve sustainable financial security.

Originally chartered to “promote thrift among its members and to make loans to its members for provident purposes,” PVCU previously operated on Dwight and Main streets in Springfield before eventually shifting to its main office to 246 Brookdale Dr. in 1991. But continued staff growth has necessitated major restructuring and rearranging within the building, which the leadership team agrees is a great problem to have, especially at a time when many businesses have needed to make cuts to services.

Pereira Grenier remembers how spacious the main office was back in 1991, when PVCU had only a handful of employees working in the building. But with major staff increases over the last 20 years, the building has undergone a makeover to ensure that the office remains comfortable and welcoming to both employees and members. The basement, once used solely for record retention, now houses offices for the HR, marketing, and operations departments, as well as the credit union’s call center. Loan officers and service representatives, meanwhile, occupy the main floor for ease of member accessibility.

“We feel it is important to have our loan officers right there on the main floor where they are easy for members to reach,” Marchand said. The credit union strives for a similar environment at its other locations: at Baystate Medical Center and at 1883 Main St. in Springfield; at Westover Air Reserve Base in Chicopee; and at Savage Arms in Westfield. PVCU also operates a number of ATM locations in Springfield, Chicopee, and Holyoke.

“In the three years I have been here, the morale is at an all-time high,” said Human Resources Coordinator Jennie McPherson. “We have gone from a transaction culture to a consultative culture, and everyone is excited about what we are doing for our members. We all work well together as a team, and it’s a very inclusive environment. When we do off-site team-building exercises, staff members are happy to attend.”

McPherson and Marchand agree that PVCU’s success starts from the top, with the leadership Pereira Grenier has provided for three decades, and especially since taking over as president and CEO in 1998. They say employees have been inspired by how hard she works and her commitment to achieving success.

“She is a leader who really believes in what she’s doing every day, and the team comes together because of that,” Marchand said.

Guided by an 11-member board of directors that sets policy, governed by its members, and led by a dedicated staff, she added, PVCU is poised to continue its success into 2015. Invested in far more than its bottom line, Pereira Grenier and her team understand that, in this business, everything starts and finishes with member satisfaction.

The Law Struggles to Keep Pace with Advancing Technology