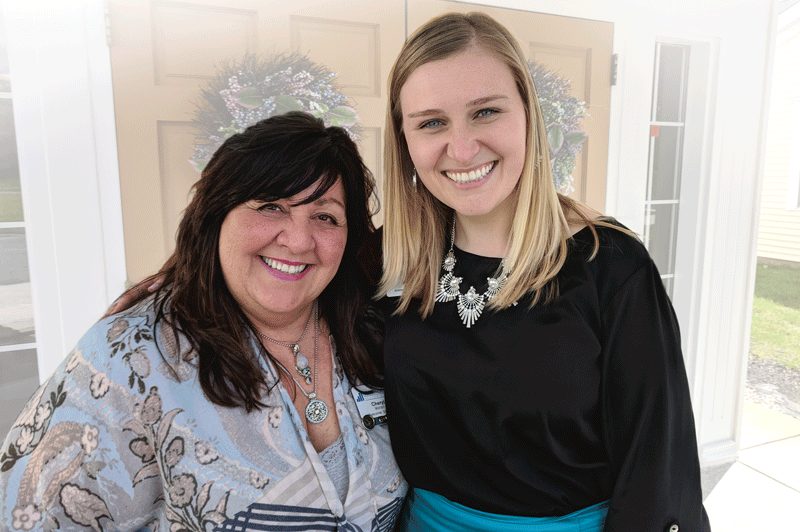 Allison Baker (right, with Cheryl Moran) says everything from the Atrium’s programs to its physical layout caters to individuals with cognitive impairment.

Over the past few decades, assisted-living facilities have increasingly opened dedicated memory-care units, and for good reason — a booming senior population is set to spawn sharp increases in Alzheimer’s disease and other dementias. These facilities stress safety, but more than that, they aim to keep residents active and engaged with life, while giving their loved ones much-needed peace of mind.

The guilt often associated with ‘putting mom in a home’ has never really gone away, even when the move makes sense, and those ‘homes’ — especially those which focus on memory care — aren’t what they used to be.

“It seems like a last resort sometimes,” said Allison Baker, director of Community Relations at the Atrium at Cardinal Drive in Agawam. “But what we’re able to provide in this community is care that is centered around their cognitive needs.”

Atrium — one of 56 communities in the Benchmark chain, which focuses solely on memory care — is celebrating its 20th anniversary this year, which allows its leaders to take a long view of how residential memory care has evolved.

It’s no secret that, as the senior population in America swells, so have instances of dementia. Alzheimer’s disease alone affects more than 5 million Americans — and, barring a cure, that figure might soar to 16 million by 2050, according to the Alzheimer’s Assoc.

That puts residences that specialize in memory care in a sort of sweet spot when it comes to meeting a growing need. In fact, that goes for assisted living of all kinds.

“The reality is, we’re all going to need help in the future,” Baker said. “It’s not something everyone wants to think about, but it’s reality. We try to educate families and provide them with guidance, whether or not someone moves into our community. Healthcare is not easy to navigate, but when families do come in, they see we’re not an institutional setting, but a homelike environment — yet, we can still meet their care needs.”

While giving BusinessWest a tour of Armbrook Village in Westfield, Executive Director Beth Cardillo noted the small size of the rooms in its Compass memory-care neighborhood, but there’s a reason for that — smaller spaces are easier to psychologically navigate, and residents spend most of their time outside the room anyway.

“Memory care is a smaller life in terms of space, but what we do there is no different than what we do in the rest of the building,” she said.

There are a few main reasons why families choose memory care, she noted. The first is that their loved one may be a flight risk, and families are worried their they might wander out of a building at 3 a.m. if the unit isn’t secured. “So, safety is obviously the number-one concern,” Cardillo said.

“The other piece, what people often don’t realize, is that, as someone’s world gets smaller, what we provide is a safe but very caring, normalizing environment. It’s a smaller world that’s a safer world. Often, people move to traditional assisted living and realize the world at large in this building is too big for them; they can’t negotiate the space. Sometimes less is more.”

Loved ones come to realize this too, she added. “When people move into memory care, for a lot of reasons, their families breathe a big sigh of relief, and it feels like a burden has been released off their shoulders. I always hear, ‘why didn’t I listen to you? It took me a while to get on the same page with this, but you were so right.’”

Kelly Sostre, executive director of Keystone Commons in Ludlow, which also boasts a dedicated memory-care neighborhood known as the Cottage, agreed that it can be difficult for families to come to terms with a growing need for help.

“It’s a hard hurdle for a child to get over, knowing her mom needs to be in memory care,” she told BusinessWest. “I definitely have to hold their hand through that process and explain the benefits of being in memory care.”

However, she went on, “just a week or two after they’re here, they’re like, ‘this is the best thing ever.’ They don’t have to worry anymore — they can come in and have a quality visit with mom, not worrying about medications or bathing her. They’re engaged, not tired, because they’re sleeping at night.”

Baker said the layout of Atrium is purposeful, catering to individuals with cognitive impairment.

“We don’t have long hallways with a lot of rooms coming off them, which can be confusing for residents,” she explained. “Instead, there are two wings with different neighborhoods in each wing, where apartments open into a common area.” 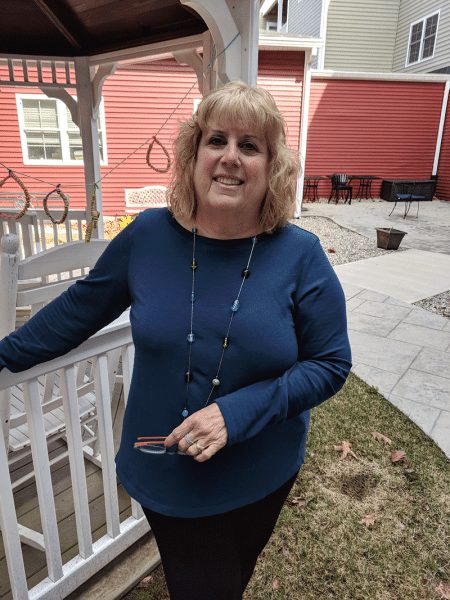 Beth Cardillo says families often find it difficult to choose memory care for their loved ones, but are typically relieved once they do.

Meanwhile, each apartment is decorated with a shadowbox out front, which families can decorate however they wish, telling a story about their lives and interests and reaffirming the idea that the residents are individuals. But, as Cardillo said, the idea is to get residents out of those rooms.

“In our model of memory care, we don’t want residents sitting in their room alone,” Baker explained. “Part of the reason someone moves into a community like this is that engagement. Someone with cognitive impairment may not feel comfortable around those without cognitive impairment, but here, in a comforting space, they feel free to express themselves — we’ve seen that time and time again.”

Executive Director Cheryl Moran noted that, whenever a resident is admitted, the family is interviewed to learn about their interests, past hobbies, favorite foods, and more.

“That way, we can program our care and activities to what they enjoy,” Baker noted. “Some residents may enjoy playing bingo, while others may prefer trivia or want to join a garden club or a baking club. There are always multiple programs going on, so residents have the ability to decide whether to actively participate or just socialize and observe.”

The emphasis on personalizing the experience stems from an acknowledgement that these are people with long histories who led rich lives, and want to continue living. “Some were homemakers, some were doctors, some were journalists. It runs the gamut, so it’s about finding what each resident enjoys doing so they can have the highest quality of life they deserve.”

With residents ranging in age from 60 to 97, Baker noted — with birth years spanning almost four decades — even what music residents enjoy varies wildly, with tastes ranging from the 1920s to the 1970s.

“It’s about finding what each resident enjoys and appreciates,” Baker said. “And we count on families and caregivers to provide a lot of that information — and, to some degree, our residents. We want them to feel as they have control, making their own decisions on things and letting us know what programs they like and don’t like.”

With a packed daily calendar of activities like word games, reminiscing, Zumba, tai chi, yoga, art, and music, Sostre said, Keystone also tries to offer something for everyone. Shuttle trips into the community are especially popular, and they’re also a chance to educate establishments like restaurants — which are contacted in advance — on how to accommodate people with memory loss.

Back on campus, many Keystone activities are enjoyed by an integrated group, with residents from independent, assisted, and memory-care neighborhoods gathering together for exercise programs or a chef’s club in which they prepare and enjoy a meal together.

“The road to Alzheimer’s is different for each individual here, and we try to program for that individual. Sometimes their needs might be different than the general group,” said Grace Barone, director of Community Relations, adding, however, that Keystone tries to strike a balance between meeting individual needs and encouraging group interaction.

Many times, dementia affects sleep patterns, which means some residents keep odd hours, but that’s no problem in a unit that’s staffed 24/7.

“If I walked in here at 1 in the morning, I wouldn’t be surprised to see a resident or two in the common area having coffee with the care manager or doing a puzzle together because their sleeping patterns do get mixed up,” Sostre said. “But we have staff here, so if that happens, it’s OK.” 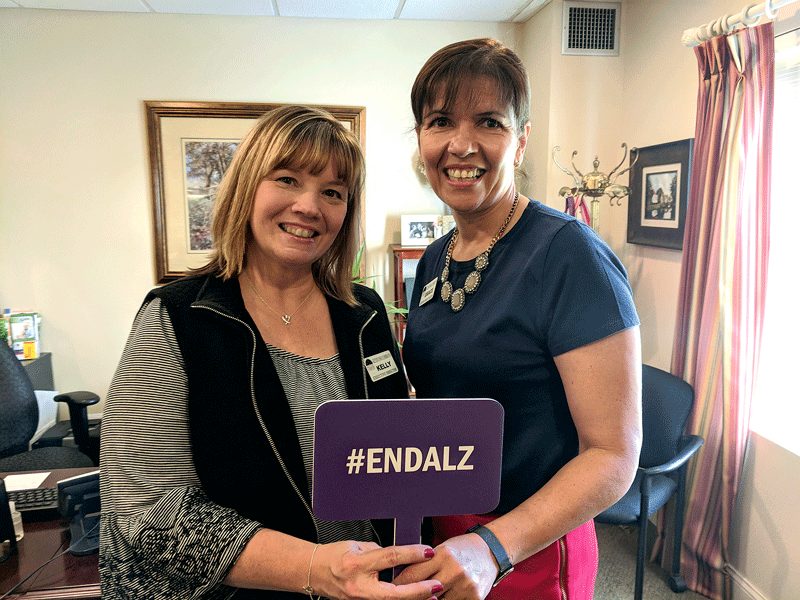 Cardillo agreed. “If you want to be up at 3 in the morning and have a cup of tea and toast, that’s fine. Want to dance in the living room at 4 in the morning? That’s fine, too. I don’t want to say anything goes, but the reason they’re here is not only to keep them safe, but to give them a robust life, not just keep them alive.”

Reminiscing is a big part of the activity program, she said, especially with a program called Reconnections, which is simultaneously a chance to learn new things and to generate conversation about the past.

“They remember going to USO dances or getting married the week before shipping out to war, or the Andrews Sisters singing ‘Boogie Woogie Bugle Boy.’ They’ll talk about art or where they went on their honeymoon. It brings up so much conversation.”

Such reminiscing has a clinical benefit, she added. “It keeps the synapses going — it’s a spark that increases dopamine in the brain. To see them sit and have discussions, it’s beautiful to watch.”

Music is a critical element as well — “it’s a window to the soul; it can bring you to your high-school prom or anyplace, really” — not to mention sensory activities from dancing and yoga to gardening. “It’s the regular world in a smaller place.”

And it’s often a place that remains meaningful to the family long after their loved one is no longer there, Moran said.

“The wife of a gentleman who passed came back to visit me maybe a month ago. She said she has a connection here and she likes to come visit, and she’s thinking about volunteering in our programs, which is very touching,” she told BusinessWest.

“It’s about love — when you walk in, I hope you feel a real sense of connection and family.”

‘The Hospital of the Future’