Technology Park Is Writing a New Chapter to Its Rich History

An architect’s rendering of the Phoenix Charter Academy that will take shape in the Technology Park at Springfield Technical Community College.

When Beth Anderson conceived what became the Phoenix Charter Academy more than a decade ago, the goal was to create an environment where young students who had failed in the traditional high-school setting, often repeatedly, might overcome their challenges and move on to pursue a college education.

It was a laudable concept, but one she wasn’t at all sure would actually work.

And as she commenced a search for a place to fulfill this dream in the city of Chelsea, it became abundantly clear that few others were sure it would work either.

“I had to practically beg people to let us be in a building,” Anderson recalled. “We had no track record, no history, and a brand-new model no one had tried. And we were working with some really tough characters.”

Eventually, space was secured in the former Assumption School, and Phoenix opened its doors in the fall of 2006. Conditions were not ideal — in fact, they were far from it. But the school’s staff and those first 75 students persevered, and soon Phoenix began making real headway toward meeting its stated mission.

In the process, said Anderson, she and other administrators learned invaluable lessons about creating an environment where students could not only learn, but also aspire to excellence.

“We learned early on how important space is,” she explained. “You can’t just stick kids in a space that looks like you’re not going to hold them to a high standard, or one that says they don’t deserve a beautiful space in which to learn.”

Fast-forward to the fall of 2012, and Anderson and her staff had those lessons clearly in mind as they went about searching for space in which to expand the Phoenix network in Western Mass. The charter was extended to include Springfield, Holyoke, and Chicopee, communities that have large numbers of at-risk students and struggling school systems, and school officials focused their search for space in the City of Homes.

A few months later, that search ended in what some might consider an unlikely location — the Technology Park at Springfield Technical Community College, and, more specifically, long-vacant space once occupied by Springboard Technologies, or at least a big part of what will be left of that building after a large portion of it is razed.

Indeed, the Phoenix facility will become the cornerstone of an imaginative reuse plan for the 110,000-square-foot Springboard building — a.k.a. Building 104 in the former Springfield Armory complex that was also once home to Digital Equipment Corp. — which has been vacant since early 2009.

Plans call for razing roughly 70,000 square feet of the structure — the middle portion of the building — then creating a temporary home for Phoenix in 16,000 square feet of surviving space on the south end of the site (classes are expected to begin in mid-August), while also building out a permanent home for the school in 30,000 square feet of Building 104 left standing on the north end. The school’s temporary quarters will then be leased out to new tenants. 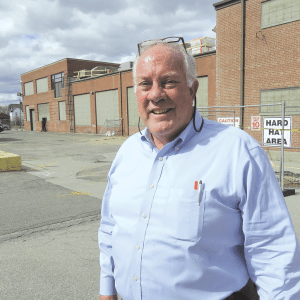 Bob Greeley, leasing agent for the Tech Park, stands in front of the portion of Building 104 that will soon be coming down.

Meanwhile, that space in the middle will be converted into roughly 300 parking spaces, replacing roughly the number that will be lost to the college and the Tech Park when a parking lot that was leased by the school off Walnut Street is redeveloped into a grocery store for the Mason Square neighborhood.

Considering all that, Paul Stelzer, president of Holyoke-based Appleton Corp., which manages the tech park for its owner, the STCC Assistance Corp., called this series of developments a “win-win-win” scenario, with maybe a few more ‘wins’ as well. He counted Phoenix, the college, the Mason Square area, and the city as a whole among those that will benefit from these projects in one way or another, while the Tech Park itself will get a new look and new opportunities to expand its tenant base.

“We’re excited about this, because we have the ability to do something good for the community,” Stelzer said, referring to the charter school. “And we have more space to lease, which could lead to bringing more jobs to this region.”

Challenges remain for those operating the Tech Park — Western Mass. Electric Co., which moved in more than a decade ago, will soon be vacating more than 15,000 square feet of space serving as its headquarters — but the complex (not including Building 104) is more than 90% occupied, and the WMECO space and remaining portion of Building 104 create possibilities for bringing new companies, and jobs, to a region that needs them.

For this issue and its focus on commercial real estate, BusinessWest looks at what is shaping up to be an intriguing next chapter for the Tech Park, and possible subsequent developments for the historic facility.

Since Springboard closed its doors in 2009 after struggling and downsizing for several years, and even well before that as the demise of the company became increasingly apparent, Building 104 has been a persistent challenge for Tech Park managers trying to reposition that space and generate needed revenue.

The space became a source of controversy and even contentiousness as the assistance corporation offered it as an alternative location for the state-operated data center that was eventually built at the site of the former Technical High School. U.S. Rep. Richard Neal pushed hard for the Tech High site, and eventually prevailed in what became a bitter fight over where the center would be located.

In the years since, there has been little interest in cavernous Building 104, used for manufacturing by both Digital and the Armory, primarily because there is a glut of such space on the market — and has been since the start of the Great Recession — and the Tech Park space is generally not able to compete with such properties on price, said Bob Greeley, owner of R.J. Greeley Co., long-time leasing agent for the park.

However, a new vision for the property began to take shape starting in late 2012, as plans for the neighborhood grocery store — a project pushed by city officials and agencies such as DevelopSpringfield — started to come together and, later, when Anderson and her staff began a hard search for a location in which to create Phoenix’s Springfield facility. 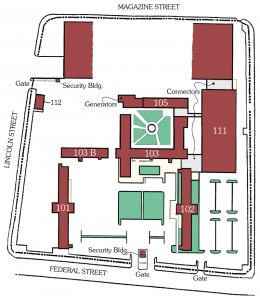 The aerial photo at left shows the massive Building 104 at the top of the image. At right is a site map showing what the park will look like when a large section of the building is razed. 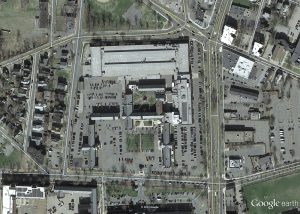 “For eight or nine years, we’ve been trying to lease all or part of that former manufacturing building,” said Stelzer. “We were looking for a solution, and circumstances emerged that presented us with an opportunity to do something meaningful there.”

The assistance corporation applied for and received a $3.86 million infrastructure grant from the state to essentially move the parking facilities off Walnut Street into the Tech Park, said Stelzer, adding that the funding will cover the costs of demolition and creating a new parking lot.

When those funds were secured, work commenced with the National Park Service and state and local historical commissions on how the assistance corporation would adaptively reuse the park and how demolition would be accomplished and also remain sensitive to the historic nature of the site for the Armory days.

Meanwhile, park administrators started working on a viable plan for repositioning the portions of the building that would be left standing, said Stelzer, adding the charter school presented itself as an attractive option.

“The Tech Park board and the college had long had thoughts of having a charter school near the campus,” he explained. “And this [Phoenix] facility will give a real boost to the community because it serves a different population.”

That population consists of students who have struggled in a traditional high-school setting, said Anderson, noting that many have dropped out for various reasons, such as academic issues, teen pregnancy, and others.

The school presents an alternative for such individuals, she went on, adding that the model involves a blend of rigorous academics — a longer school day and year, advanced-placement classes, college-class dual-enrollment options, and a strict culture — with social and emotional supports for each student.

“We develop teachers and leaders who believe in the possibility of human change and growth,” she said, “and who fight tirelessly for better outcomes for kids.”

Sara Ofusu-Amah, chief operating officer for Phoenix, said the school is planning to open in its temporary quarters on August 15, with the goal of being in the permanent building in January. Already, 88 students have enrolled — a number that reinforces the perceived need for such a facility — and school officials believe they will easily reach their target of 125 for the fall semester.

The permanent facility will include several classrooms, she said, as well as an on-site day-care facility for the children of students, a small library, a student-support center, science labs, and multi-purpose space school officials call the ‘nest,’ which will serve as the gym, auditorium, and meeting space.

“We want a beautiful space that celebrates academics and scholarship,” she said. “But there’s not a lot of bells and whistles; this is a place focused on preparing students for college.”

The 16,000 square feet that will become the temporary home for the charter school has the potential to host businesses of varying sizes across a number of sectors, said Stelzer, who described it as “higher-end flex space.”

“It will have the ability to do office, light assembly, a clean-energy tenant, or a small call center,” he explained. “We can be flexible there.”

While work begins to demolish the middle 70,000 square feet of Building 104 and outfit the south portion of the property as the temporary home for Phoenix, Greeley is seeking new tenants for the space occupied by WMECO, which is slated to move out in June.

The space was formerly part of a large call center operated by RCN, and while it’s attractive and well-appointed, it brings some challenges as well, said Greeley.

There are a number of small offices and conference rooms, he noted, which would make it ideal for use as a corporate headquarters. However, many companies today favor more open floor plans to facilitate communication between employees and improve work flow.

The space may also prove difficult to subdivide because of the way it’s laid out, he went on, adding quickly that the space gives the park some valuable inventory at a time when the economy is showing signs of life and many businesses are possibly gaining the confidence to move forward with expansion plans and new initiatives.

It’s unlikely that those who conceptualized the Tech Park and were there when the ribbon was cut in 1996 could have imagined the developments unfolding on the site today.

Then again, the park has always been a work in progress, a regional asset that has evolved as the region’s economy and business community have. It’s an evolutionary process that continues today.

In other words, a site already steeped in history is continuing to write more of it.