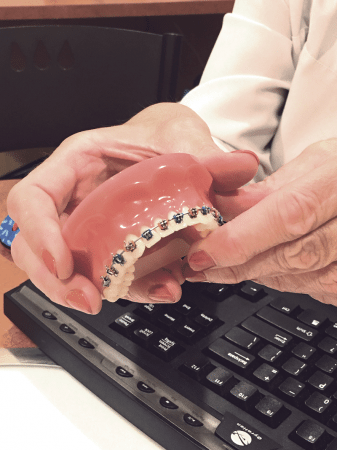 Dr. Linda Rigali shows off a model of traditional braces, which have been replaced for many patients by newer, more cutting-edge models.

Dental care has come a long way in the past few decades, with high-tech equipment, less noticeable materials, and less intrusive procedures the order of the day. For proof, look no further than how the art and science of braces have evolved. In short, area dentists say, there’s never been a better time to straighten those teeth.

As early as 400-300 BC, the Greek physician Hippocrates was looking for ways to align teeth, and there’s archeological evidence that ancient people sometimes wrapped metal bands around their teeth, presumably in an effort to straighten them. Apparently, even Cleopatra wore braces.

While no one knows for sure how effective those early efforts were, experts say the ancients were on the right track, applying sustained pressure to teeth in an effort to move them into a more favorable position.

It’s essentially the same thing we do today, albeit with much more elegant systems (and presumably less pain), through the practice of orthodontics, a dental specialty that deals with the diagnosis, prevention, and correction of teeth that are not properly aligned.

Modern-day orthodontics was born when, in 1728, French dentist Pierre Fauchard first used a device called a Bandeau, a horseshoe-shaped piece of iron that helped expand the palatal arch. By the mid-19th century, orthodontia was recognized as a science, and by 1901, orthodontists had their own scientific organization, the American Society of Orthodontics, which evolved in the 1930s to the American Assoc. of Orthodontists.

You literally had to tie the teeth into the wires, and there was a lot more force involved. Today’s braces are tiny, and are bonded onto the teeth, rather than tied around them.”

Just as education has changed over the past century, so, too have materials and techniques, improving outcomes, as well as the patient experience — and much of that has occurred in just a generation or two.

Not Your Grandmother’s Braces

As braces gained popularity during the 20th century, dentists wrapped bands around each tooth and connected them by a wire, inserted into brackets, or braces, that were cemented to the teeth. Gold and silver were popular materials, although each had its drawbacks: gold was expensive and soft, requiring more frequent adjustments; silver was less expensive, but also less malleable. 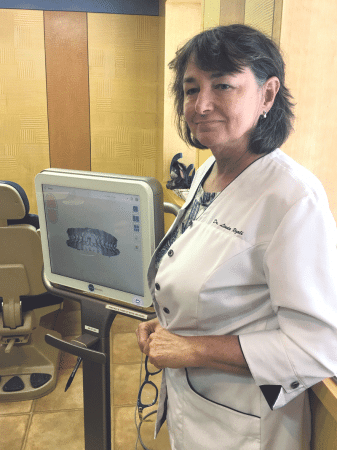 Those materials were largely replaced by stainless steel in the early 1960s, but, even then, braces were bulky and uncomfortable, said Dr. Linda Rigali of Rigali & Walder Orthodontics in Northampton.

“You literally had to tie the teeth into the wires, and there was a lot more force involved,” Rigali said. “Today’s braces are tiny, and are bonded onto the teeth, rather than tied around them.”

Materials have improved further since Rigali opened her practice 31 years ago. “We use nickel-titanium, which holds its shape and gets more active with body temperature,” she said. “They very slowly express the forces over a period of time. It’s just as effective as the old ones, but definitely a lot more gentle,” and not as painful as some adults might remember from their own childhoods.

That might help account for the fact that more than 4 million people in the U.S. are undergoing orthodontic treatment, according to the American Assoc. of Orthodontists (AAO).

A century ago, most patients made their first trip to an orthodontist in their 20s, but today, the AAO recommends children see an orthodontist at about 7 years old, when the permanent teeth are emerging, to evaluate whether they will need braces and, in some cases, to do interceptive treatments that can change problematic growth patterns. Indications for treatment with braces are predominantly functional, Rigali says, and can include overbites, underbites, crowding, excess spacing and asymmetries.

Once a need for braces is established, a treatment plan will be devised. A first visit will include a thorough examination, close-up photographs, and X-rays, which have also changed for the better, Rigali says, since she joined the profession.

“Thirty-one years ago, we were hand-dipping X-rays in a dark room,” she said. “Now that’s all digital — we get it all on the computer.”

Among the more dramatic recent advances is the use of nearly invisible Invisalign braces, which are taking off in the industry; about 35% of Rigali’s patients now use the clear, flexible, lightweight plastic aligners that combine advanced 3-D computer-graphics technology with the 100-year-old science of orthodontics.

We do a three-dimensional scan, get a virtual model on the computer, then I can move the teeth, on the computer, through all the stages. Once I have the staging the way I want it, the company produces a series of clear plastic aligners. They’ve got a couple hundred bioengineers working on the process. This has changed things a lot.”

While the theory is much the same as traditional braces — that slow, steady pressure will move teeth — the material and the treatment plan are revolutionary, Rigali said.

“We do a three-dimensional scan, get a virtual model on the computer, then I can move the teeth, on the computer, through all the stages,” she told BusinessWest. “Once I have the staging the way I want it, the company produces a series of clear plastic aligners.” Each set is worn for two weeks, and then is switched out for the next, she added. “They’ve got a couple hundred bioengineers working on the process. This has changed things a lot.”

For example, the use of 3-D scanning technology has nearly eliminated the need for dental impressions, which require pressing a tray of gooey material into the top and bottom teeth.

“It’s the hottest thing now,” said Dr. Janice Yanni, owner of Yanni Family Orthodontics (YFO), who utilizes the ITero Element Scanner in each of her offices, in Longmeadow, West Springfield, and Tolland, Conn. “Our practice is going impressionless — so no more gagging on those impressions.” 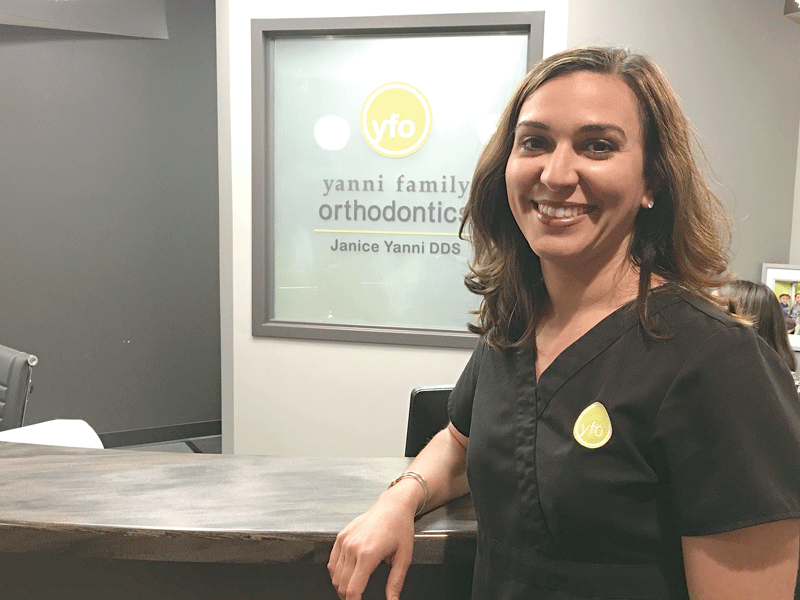 As the practice of orthodontics has changed, so, too, have orthodontists’ offices, says Craig Sweitzer, the owner of Craig Sweitzer & Co. General Contractors, who has built some 200 dental offices over his 34-year career.

“When we began, there was different equipment, different decorations — it was a whole different feel,” he said. “The equipment drives the design, and the stress nowadays is to keep things clean, uncluttered, and to hide the equipment. It’s become more friendly-looking.”

In Yanni’s Longmeadow office, for example, there are no visible hoses, lines, cables, or orthodontic tools, even in the treatment room, where, as is typical in orthodontists’ offices, multiple bays are set up in a single, large room for fittings and adjustments. Extra-bright ceiling lights have eliminated the need for the bulky workstation lamps that used to loom overhead, so patients can chat with family members or watch a movie on one of the large, flat-screen TVs mounted on the wall. (“The hot movie right now is Beauty and the Beast,” Yanni said.)

Sweitzer says he and his sons Michael and Brian, who have joined their father’s company, work closely with the doctors on office design.

“It’s nice to control the project, get a relationship with the doctor, from square one,” said Michael Sweitzer, who designed and built Yanni’s Longmeadow office. “It’s really cool, drawing it, then seeing it come to life.”

The company does collaborate with architects, as is required by law. “In Massachusetts, you have to have a registered architect to pull a building permit for a commercial project, anything over 35,000 cubic feet,” Craig Sweitzer said.

There’s more to keep up with these days than advances in the science and technology of orthodontics, and practices like Yanni’s and Rigali’s take advantage of interactive and social media to help make the experience a pleasant one for their tech-savvy young customers.

At Yanni’s Longmeadow office, for example, patients can use one of four iPods set up at a station in the waiting room, designed by Michael Sweitzer with input from an IT specialist.

In addition, YFO sponsors a number of online contests, including #YFOPromPosals, in which patients submit photos of themselves asking someone to the prom to the practice’s Instagram and Facebook pages. They earn points for likes and shares, and the winner receives up to $250 to cover the cost of hair, flowers, and transportation for the prom. (Incidentally, YFO can be found on Snapchat as well.)

Rigali & Walder also holds virtual contests, such as Where in the World is Rigali and Walder Orthodontics? and Hero Dad, which are designed to keep young patients entertained and engaged.

“You’ve got to make it fun,” Yanni said.

Much of today’s research in orthodontia focuses on the biology of tooth movement, and looking for ways to speed up the process. “Everybody wants it done faster,” Rigali said.

One new device, AcceleDent, appears to move things along. Used with traditional or Invisalign braces, the vibrating mouthpiece is worn for 20 minutes a day to stimulate bones, which leads to faster bone remodeling.

“There are studies that show it is speeding tooth movement up to 30% to 50%,” Rigali said. “Studies are still coming out, but we’ve seen some really great results with this.”

“We make little perforations right through the gum tissue into the bone. That sets up a wound response that gets the bone metabolism to go faster,” Rigali told BusinessWest. “This has some very legitimate studies; it is based on really good, sound research.”

In spite of advancements that promise to hasten the process, Yanni cautions her patients that there are no quick fixes. She tells them to plan to commit to a two- or three-year period, and once those teeth are straight, a retainer will still be required to keep them from moving back.

“There is no instant gratification in the world of orthodontics,” she said. “You’re either in it, or you’re not.”