The Massachusetts Board of Higher Education formally approved Ramon Torrecilha, a lifelong educator, as the 20th president of Westfield State University (WSU). A lifelong educator, he is currently a professor of sociology at California State University Dominguez Hills. “I am delighted by the appointment of Dr. Ramon Torrecilha as the new president of Westfield State and look forward to working with him,” said Carlos Santiago, state commissioner of Higher Education. “I want to thank the Westfield board of trustees and the search committee for delivering an exceptional pool of quality candidates, and congratulate them on an outstanding selection.” Torrecilha will be the first Latino to serve as president in the university’s 176-year history. He is scheduled to begin his term on Jan. 25. Westfield State’s presidential search process officially launched in January 2015, with a search committee comprising 13 members of the campus community. The pool of candidates was narrowed to a semi-finalist group of 13 in August, and on Sept. 29, the presidential search advisory committee announced three finalists: Torrecilha; Damian Fernandez, CEO and head of school at Ethical Culture Fieldston School; and Linda Vaden-Goad, provost and vice president for Academic Affairs at Framingham State University. On Oct. 28, the WSU trustees voted to recommend Torrecilha as the final candidate, and the state Board of Higher Education approved the choice this week. Previous to his current role at California State University Dominguez Hills, he served as provost and vice president for Academic Affairs, where he designed and implemented a cohort-based, first-year initiative to increase student retention and graduation rates. As provost, he invested in student research and supported more than 200 undergraduate research projects. He provided leadership and support to secure more than $16 million in grants and contracts and $600,000 to support faculty research and creative activity. Torrecilha also served as executive vice president of Mills College in Oakland, Calif., during which time he served as acting president on two separate occasions. His many accomplishments at Mills include the design, implementation, and successful achievement of a capital campaign that raised more than $130 million dollars on behalf of women’s education. He also led a successful campus reaccreditation process resulting in an eight-year renewal from the Western Assoc. of Schools and Colleges and increased the alumnae participation rate by 10%. Torrecilha earned his bachelor’s and master’s degrees in sociology from Portland State University and his Ph.D. in sociology from the University of Wisconsin Madison. 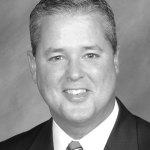 Bacon Wilson, P.C. announced that attorney Kenneth Albano was recently honored with the Esteemed Service Award from Behavioral Health Network Inc. (BHN). Albano was presented with the award during BHN’s annual meeting, in recognition of his 20-plus years as a member of BHN’s board of directors and his related board service. “I am grateful to BHN for this recognition,” Albano said. “The services BHN provides are essential to the wellness of so many in our community who may be struggling with addiction or other life crises. I am honored by this award, and it has been my honor to serve this excellent organization for so many years.” Behavioral Health Network is a growing non-profit, community behavioral-health service organization, and has served the needs of children, adults, families, and communities in Western Mass. since 1938, offering tools and treatments for those with mental illness, substance-use disorders, or intellectual disabilities. Albano is a senior partner with Bacon Wilson and a member of the firm’s corporate, commercial, and municipal practice groups. In addition to his work with BHN, he has worked with the American Cancer Society, Make-A-Wish, and the ALS Assoc., and he serves as board chair of the March of Dimes Western MA Division and on the board of the New England Chapter of the March of Dimes. In June, Albano was honored with the Mass. Bar Assoc. Community Service Award in recognition of his exceptional volunteer work.

Country Bank President and CEO Paul Scully announced that Eric Devine has been promoted to first vice president, Information Technology. Devine has been with Country Bank since 2006 in the IT Department, working most recently as the Information Technology Services officer. “Eric is a dedicated and driven member of our team. I am pleased to have the opportunity to recognize him for his outstanding leadership over the last few years,” Scully said. Devine studied at Sacred Heart University with a concentration in information technology and graduated from New England School for Financial Studies in 2012. He is very active in the community, serving on the program advisory committee for Porter and Chester Institute, working on the annual SIDS Road Race committee, and supporting the Griffin’s Friends Children’s Cancer Fund as a runner and charity fund-raiser. In addition, he served as the 2015 Springfield grand parade marshal for the annual St. Patricks Day Parade in Holyoke. He was elected to BusinessWest’s 40 under Forty in 2015.

Aaron Smith, P.C., a certified public accounting firm serving individuals and businesses in the Pioneer Valley, announced the addition of two new staff accountants, Trent Domingos and Emily Sit. Both are responsible for audits, reviews, and compilations. “We are pleased to add two staff accountants to our team, as this allows us to maintain a high level of excellence and personal attention that our clients have come to expect,” said David Padegimas, CPA, managing director of Aaron Smith, P.C. Domingos is a graduate of Fairfield University with a bachelor’s degree in accounting. He previously served as a tax intern at Therrien & Associates, P.C., in Wilton, Conn. At Fairfield University, Domingos was a four-year member of the varsity rowing team. “I am excited to join the team. I look forward to growing as an accountant in this position and contributing to the distinguished reputation that Aaron Smith, P.C. has established,” Domingos said. Sit is a graduate of the UMass Isenberg School of Management with a bachelor’s degree in business administration and accounting. She is expected to obtain her master’s degree in accounting in May. Prior to joining the team at Aaron Smith, P.C., she was employed by IBM Corporation as a financial analyst. She is fluent in English and Chinese, and enjoys gardening in her spare time. “Aaron Smith, P.C. has an excellent track record of great customer service,” Sit said. “I am thrilled to continue my passion for accounting in a well-respected firm.” CPAs at Aaron Smith, P.C. continually invest time and resources into furthering professional education, using state-of-the-art computer technology and developing extensive new business relationships.

Ruth’s House, the assisted-living residence at JGS Lifecare, announced the appointment of Samantha Panniello as dining services coordinator. As an experienced executive and catering chef, she brings a new dimension to the facility’s signature kosher dining and banquet menus. Panniello brings more than 10 years of experience to Ruth’s House. Formally trained at the Connecticut Culinary Institute, where she was recognized for excellence and graduated at the top of her class, she worked as a chef for both Springfield College and UMass Amherst before becoming kitchen manager of the Federal in Agawam and Vinted in West Hartford, Conn. where she was named head chef. While at Vinted, the restaurant received a rave review by the New York Times, praising its “rich tastes on small plates.” Panniello also landed an executive chef position at Lego in Enfield, Conn., and most recently served as head chef of Marketplace/Back Street Bistro in Springfield. “We’re proud to welcome Samantha to coordinate our dining services. She brings tremendous talent, enthusiasm, and experience to our culinary team,” said Joelle Tedeschi, executive director of Ruth’s House. “Our residents are in for a treat.”