Linda Manor Assisted Living was designed to be aesthetically pleasing — but this is an era when senior-living facilities must be much more than that. That explains the center’s focus on a continuum of care, its efforts to engage residents in activities inside and outside its doors, and its insistence on families being involved in decisions about the details of care — making what can often be a difficult life transition a little more like, well, home. 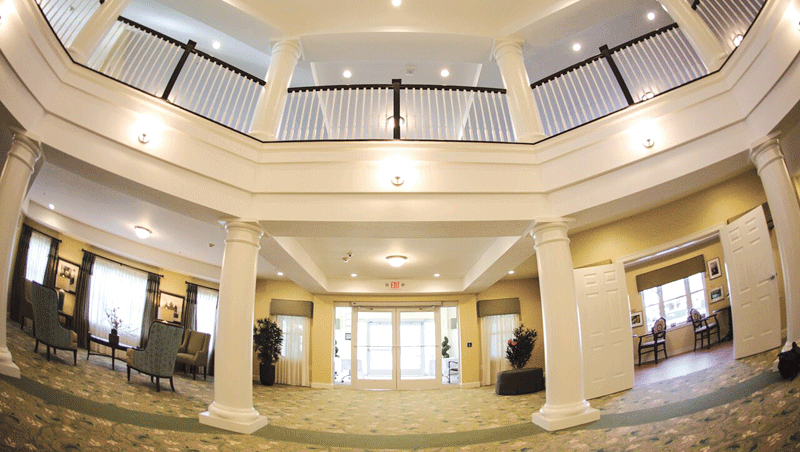 The architecture and interior design of the newly opened Linda Manor Assisted Living facility in Leeds is breathtaking — and unusual for a facility of its kind.

The front doors open into a brightly lit foyer with high, coffered ceilings and comfortable sitting areas. A few feet away, a gracious twisted staircase climbs to an enormous, circular balcony on the second floor that surrounds the living area, and is punctuated by a large number of nooks with game tables and inviting couches and chairs, as well as a country kitchen.

The facility, which opened last October, has 85 units for residents, who can choose to live in a studio apartment or a one- or two-bedroom unit with their own kitchenette and private bath.

The 76,750-square-foot building features plenty for people to do, with activities that run the gamut from book clubs to art classes and exercise sessions; from volunteering at Kate’s Kitchen in Holyoke, which provides free meals to needy people, to day trips, such as a recent visit to the Sterling and Francine Clark Institute in Williamstown.

The lineup is dictated in large part by residents, who make decisions about what they want to do via committee, which they share with the activity director and write about in their newsletter.

“Our residents are civic-minded and want to be active; they may need some help, but they want to lead full lives,” said Kathy Herman, registered nurse and executive director of Linda Manor Assisted Living, or LMAL. “A few weeks ago, some residents wanted to spend the day going to tag sales, so we let them pick out locations and took them there. Having choices about what they do is important and makes them happy.”

But it is the continuum of care and philosophy that was established long before Linda Manor opened that sets it aside from similar senior living centers, she said. 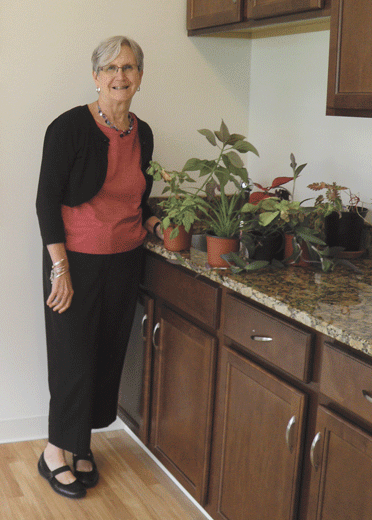 It was built by Berkshire Healthcare, the largest not-for-profit company in Massachusetts, with 15 affiliates across the state and two hospices and a pharmacy serving clients. “We also have our own temporary staffing agency called Integra Nurse for our nursing homes,” said Albert Ingegni II, vice president of Housing Services. “This is more than bricks and mortar; we care about our residents, and, because we are a not for-profit corporation, we are driven by our values. Our residents always come first, and we try to make a connection with every one of them.”

Herman agrees. “It’s not just the resident who moves in. It’s the family that comes with them, and we stay in close touch with family members,” she said, adding that it’s important for children to know their parents are happy and that they can call whenever they have a concern. LMAL also boasts a van that is used to transport residents to doctor’s appointments, church, and other places they need or want to visit, which relieves stress on families.

The campus includes Linda Manor Rehabilitation and Nursing Center, so seniors who make their home in the new assisted-living facility have access to the above-mentioned continuum of care. Herman said it comes into play if a resident is hospitalized and needs short-term rehabilitation; staff from both buildings hold joint meetings about the resident’s health and well-being, and they can be easily moved back to their home when they are ready.

“Having both facilities on the same grounds allows us to integrate services and provide people with the most appropriate care,” she told BusinessWest. “We’ve established relationships between people in both buildings, which is wonderfully helpful to families, as they don’t have to coordinate care for their loved ones.”

Resident Berta Gauger enjoys living at LMAL. “It’s nice to have people around, and we travel and go places,” she said, adding that she looks forward to volunteering at Kate’s Kitchen.

Ingegni said a service plan is created for every resident that is assessed every six months or whenever the staff observes a change in behavior.

“We work to accommodate each person’s needs, and if they need more help than we can provide in the assisted-living section of the building, they can move into our Life Enrichment Program,” he added, referring to LMAL’s specially designed memory unit (more on that later).

Before Linda Manor Assisted Living was built, Ingegni said, Berkshire Healthcare had decided to expand its housing component, and the Leeds campus, which already housed Linda Manor Rehabilitation and Nursing Center, was quickly identified as the ideal place to grow. 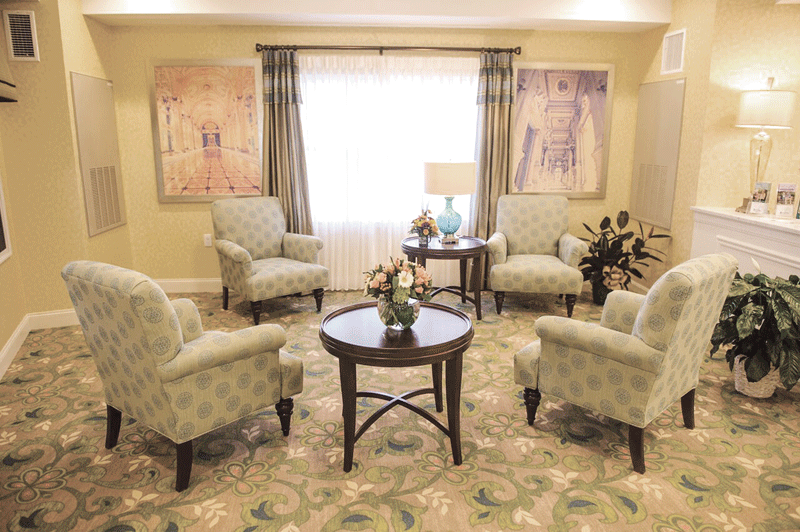 Many areas at Linda Manor are set aside for conversation.

“We wanted to provide post-acute-care services to this community and supplement the services Linda Manor was already providing,” he explained, adding that it is one of only a few senior-housing communities in the country designated by Medicare as a five-star facility, and was feted with the Gold American Healthcare Assoc. Award two years ago, which Kimball Farms in Lenox has also received.

Kimball Farms is a retirement community operated by Berkshire Healthcare, and offers housing that covers the spectrum of possibilities: independent living, assisted living, a memory unit for people with Alzheimer’s and dementia, and a skilled-nursing-care center.

Herman said it allows people to age in place, but, more importantly, the philosophy is one of “habilitation,” which means doing everything possible to help people maintain the level they are at when move in.

“It was developed by Joanne Koenig Coste, who wrote Learning to Speak Alzheimer’s, she noted. “We try to maximize success and minimize failure.”

Herman had retired from Kimball Farms before LMAL was built, but Ingegni talked her into returning to work so she could bring the successful program at Kimball Farms to LMAL and make sure it was well-established.

The Life Enrichment Program is an important component, and was created to take advantage of principles gleaned and perfected through years of experience at Kimball Farms.

“People with dementia often develop low self-esteem when they realize they can no longer do things they used to do. They get frustrated and bored, and, if they are dependent on others for all of their care, they feel like they have failed,” Herman said. “But if you provide them with an environment where they can be successful, they are happy, and it limits adverse behaviors.”

She explained that the Life Enrichment unit has a large kitchen that is central to the floor, a living room, and a sunporch that leads to an enclosed walking path bordered by gardens. “The residents can go in and out whenever they choose.”

Before new residents arrive, the staff obtains a detailed history of their habits, which includes the time they usually get up, if and when they eat breakfast, their daily routine, what they did during their lifetime, and activities they enjoy.

“We establish a plan of care around their schedule,” Herman noted. “They don’t have to do anything based on the clock, and if they want to eat lunch at 2 p.m. instead of noon, they can do it. If you have established a pattern in life, it’s hard to change when you’re 85.”

The staff undergoes continual training and holds frequent meetings to assess how each resident is doing.

“Our residents may have lost some of their cognition, but they don’t lose their emotions, so that’s where we meet them,” Herman noted. “We make them feel good about themselves, and if they don’t understand our words, they do understand body language, so if we are smiling and happy, it is reflected back.” 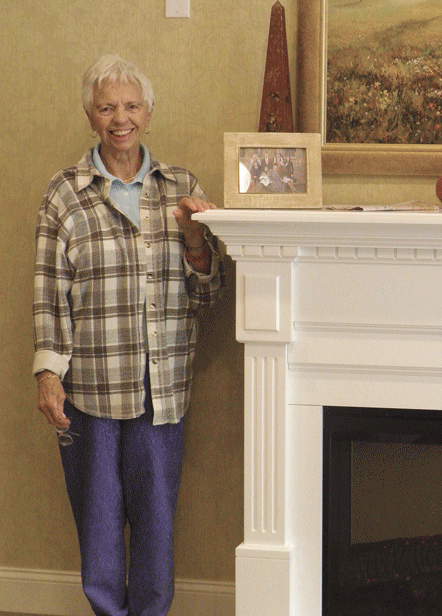 She added that staff members are carefully chosen, as not everyone has the temperament to work in a dementia unit, which requires thinking outside the box and coming up with solutions.

When Ingegni spoke with BusinessWest, 15 of 20 available spots in the unit were filled, and although it could have been built to house more people, he said it was designed to be small for a reason. “We found that, if there are more than 25 or 30 people, you lose your effectiveness.”

Although people with dementia are sometimes put on anti-psychotic medications while they at home, Herman said, when they are moved into an environment with people trained to meet their needs, in some cases, they can stop taking them.

“Alzheimer’s and dementia are a disease of the family, and the drugs are often given to make people sleepy, which allows the caretaker to sleep at night,” she said. “We look at the medications each person is taking and work closely with their physicians.”

Ingegni added that the way residents are treated starts with the behavior and attitude of management and filters down to each employee. “They set the example.”

For example, on a recent day Herman found a resident in the memory unit sitting inside while everyone else was outdoors. “I went to her room, got her sunglasses and hat, put them on her, and made a big deal about the way she looked. Then, I asked if she wanted to go for a walk,” she recalled. The technique worked, and Herman explained what she had done to the staff so they could emulate it if needed in the future.

“All of my managers are hands-on,” she said, citing another example that occurred when the dietitian was told a woman wouldn’t sit down to eat dinner. “The dietician responded by telling me she would prepare special finger foods so the resident could walk and eat at the same time, and she got creative with things like a salmon sandwich.”

In another instance, a woman who had been required to have a private aide at another facility because she was deemed a fall risk no longer needs one.

“She could still walk, but wasn’t participating in activities before she came here; she used to stay in her room. But now she is out all the time and hasn’t fallen yet,” Herman said.

Ingegni said the improvements registered by residents go back to the facility’s philosophy of habilitation.

“We want to keep everyone at their highest level,” he reiterated, citing examples like providing a typewriter for a woman in the memory unit who used to be a secretary and giving her paperwork so she felt she was needed.

Herman said the dedication of the staff is exemplified by the facilty’s bus driver.

“When he found he shared a love of poetry with one of the men in the memory program, he began coming back at night to read with him,” she said, adding that the driver also leads a support group for families of residents on the memory unit.

LMAL has space available for additional residents, and Herman said the process of filling the complex is still ongoing.

But she and Ingegni are obviously proud of the new facility and believe it is off to a very solid start.

“It’s safe, it’s secure, and we are innovative and open to suggestions, so families can play an active role in what happens here,” Ingegni said. “And the fact that we offer different levels of care helps them and helps our residents.”

Which is exactly what everyone wants for aging parents who can no longer live in their homes: a place that caters to their needs and does everything possible to keep them healthy and engaged.