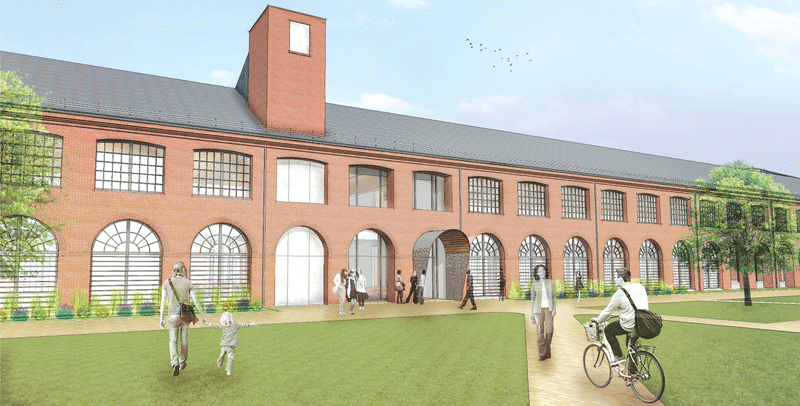 Above: an architect’s rendering of a renovated Building 19. Below left: a late-19th-century shot of the structure, which served primarily as a warehouse for the Armory. 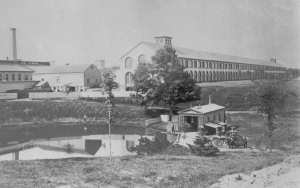 It’s called Building 19. That’s the number the federal government attached to the structure at the Springfield Armory that eventually grew to 660 feet in length and was used to store hundreds of thousands of rifle stocks at a time. Despite its historical and architectural significance (its first portion was completed 14 years before the Civil War started), the building has essentially been lost to time, serving as a storehouse for unwanted equipment that those at Springfield Technical Community College, which moved into the Armory complex in 1967, can’t simply throw away. But plans have been blueprinted to make ‘19’ the new center of the campus.

Springfield Technical Community College President Ira Rubenzahl likes to say the school moved into the historic Springfield Armory site back in 1967 … “and it’s been moving in ever since.”

Elaborating, he said the process of converting former Armory manufacturing buildings, office space, officers’ quarters, and other structures into classrooms, administration areas, and assorted other academic facilities hasn’t really ceased since it first began back when Lyndon Johnson patrolled the White House.

And the latest, and perhaps most ambitious, example of this phenomenon in the college’s nearly-50-year history is the planned conversion of the structure known as Building 19, which was once a warehouse that held more than a half-million rifle stocks at any given time, into the home for a host of facilities ranging from the library to the financial-aid office to the bookstore.

“It’s going to be the centerpiece of the campus,” said Rubenzahl, who took the helm at the school in 2004 and has overseen several projects involving reuse of old Armory buildings. He noted that, while there are still some hurdles to clear, especially final appropriation of the $50 million this undertaking will cost, the project is rounding into shape.

Gov. Charlie Baker visited the region late last month to announce $3 million in state funding for what amounts to final designs for the project, which will make use of all 660 feet of this intriguing structure, which is historically and architecturally significant, said Rubenzahl.

Indeed, Building 19 is the only standing structure in this country that can be called a caserne, a French term for a combination military barracks and stables, although it was never actually used for that purpose. From the beginning, which in this case means 1846, when the first of four sections of the building was completed, it has served primarily as a storage facility.

“It wasn’t used as a stables, but it looks like one,” he explained, “because it’s built on the model of a caserne, which had the cavalry horses on the first floor and the cavalry officers living above them. It’s not a replica; it’s the U.S. Army’s version of what this might look like in the United States.”

The building’s ground floor has dozens of arched entrances, or openings, which will allow for a great deal of creativity when it comes to design of the spaces inside while dispensing a huge amount of natural light, said Rubenzahl. Meanwhile, the second floor features an equal number of large, slightly curved windows, which can be used to shape unique, desirable working and studying spaces.

“We’re told that 40% of the exterior walls are entrances, which is very unusual,” he said. “We have all these arches, so you can make an entrance anywhere you want. And then you can do some nice things with light; it’s going to be very dramatic.”

The renovation of Building 19 is likely to commence sometime next year, said Rubenzahl, and while it won’t be ready for the 50th anniversary celebrations in 2017 that are now being blueprinted, it should be open for business the following year. 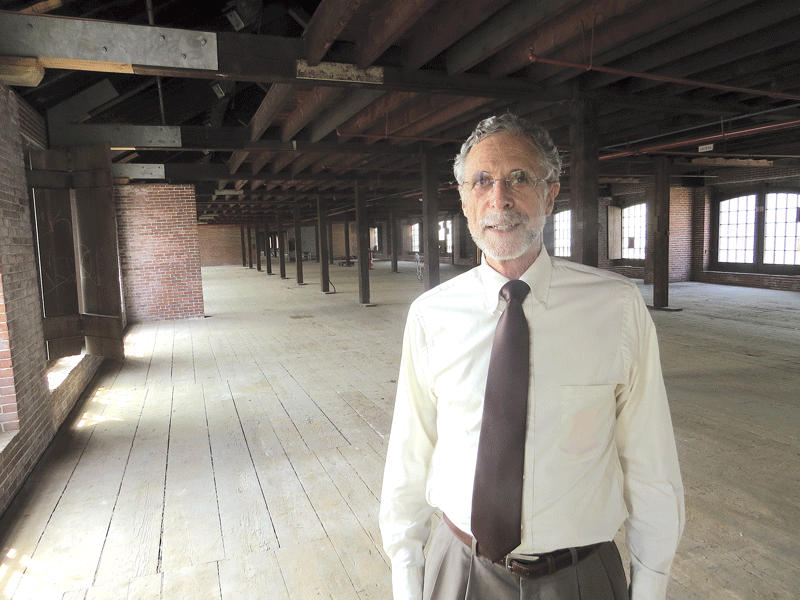 STCC President Ira Rubenzahl says that, if renovated as planned, Building 19 would become the new center of the campus.

Overall, the ‘new’ Building 19 will reorient the campus, with the focus shifting from Garvey Hall to the renovated structure, and centralize it as well, in a way that will add needed convenience to students and staff alike.

“This will help organize the campus in a way that it’s never been organized before,” he explained. “From the beginning, the college took this space, then it took that space, and said, ‘we need something for this … we’ll put it over here.’ There was never a master plan to organize the functions in a coherent way that would help the students.

For this issue and its focus on education, BusinessWest looks at the ambitious plans for Building 19, and how they would change the landscape at STCC — in every sense of that word.

In recent years, Rubenzahl told BusinessWest — actually, since the day the college opened — students could spend their entire time at the school and never really notice Building 19, as large as it is, other than to walk by it on the journey from the parking lots off Pearl Street to the classroom buildings in the center of the campus, constructed in the ’80s on the site of former Armory buildings.

All that will change if funding is approved and construction starts as scheduled, he went on, and by September 2018, the structure would be the undisputed hub of the campus.

This startling transformation has been decades in the making, he went on, adding that discussions concerning what to do with Building 19 have been ongoing — at different levels of intensity, to be sure — since the college’s earliest days, when it was known as the Springfield Technical Institute (STI).

That was in the fall of 1967, roughly three years after U.S. Defense Secretary Robert McNamara announced that the federal government would decommission the Armory, built in the late 18th century on a site chosen by George Washington, and about 18 months after city officials lost a pitched battle to keep it open.

Soon after those efforts failed — or years and even decades before that, depending on whom one talks to — officials began eyeing the site as a possible home for a college, especially the west side of Federal Street, with its long brick buildings and large courtyard.

In those early days, STI and the Armory actually co-existed as the latter was decommissioned, with the school gradually occupying more of the Armory buildings in the years to follow. Building 16, as it was called, the Armory’s main administration building, served the college in that same capacity, and eventually became known as Garvey Hall in honor of the school’s first president, Edmond Garvey.

Meanwhile, Building 27 became home to the school’s library; Building 20, one of the youngest structures on the property, dating back to the 1940s, would house most health programs; and a series of buildings on the east side of Federal Street, first home to GE and then Digital Equipment Corp., became the Technology Park at Springfield Technical Community College, now home to dozens of businesses and, most recently, a charter school.

As for Building 19, well, it has been used almost exclusively for storage, said Rubenzahl, adding that, over the decades, all manner of equipment and supplies have wound up there — and remained there for years.

Indeed, as he offered BusinessWest a tour of the facilities, he walked past everything from long-obsolete computers to rusting air conditioners to an old phonograph.

“We’re a state agency, and that means we’re not allowed to throw things out,” he explained, adding that disposing of all equipment or identifying other potential users is a laborious, time-consuming process that certainly helps explain why such items accumulate. 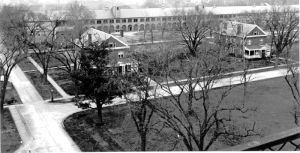 Building 19, seen in the background in front of Armory buildings torn down to make way for new classroom buildings, has historical and architectural significance.

Soon, these objects — and their numbers have been dwindling recently — will have to reside somewhere else because Building 19 will be getting a serious interior facelift and new lease on life.

As he talked about it on a hot summer’s afternoon, Rubenzahl walked the length of both floors and pointed to the third, a windowless, loft-like area, talking about how each will be repurposed.

The ground floor, with those arched entrances, will become home to a number of offices, including admissions, registration, financial aid, and others, and also the bookstore, currently located in Building 20, he said, adding that the space throughout the building is dominated by columns, which makes it far more suitable for offices and student uses than for classroom space.

The second floor, meanwhile, will house the library and other student services, he said, adding that facilities will be placed toward the center of the spaces, generating maximum benefit from all those windows.

Overall, the building is in good condition, he noted, and while the older structures pose challenges, they were in many ways overbuilt because of their intended uses, and have stood the test of time.

“They were built by the Army, they were built for weapons storage in some cases, and they’re just very solidly constructed,” he explained. “Structurally, these buildings have great integrity, so in many ways, they’re good buildings to renovate.”

When the renovation project is complete, Rubenzahl said, the campus will have tens of thousands of square feet of space to repurpose — in Building 16, the library, and other structures — and these developments create opportunities for the college, the Commonwealth, and perhaps the community as well.

Meanwhile, there are other projects to tackle, including Building 20, the largest structure on the campus, which is partly in use (the first three floors are occupied), but there are a number of infrastructure issues.

A master plan is being developed for the entire campus, said Rubenzahl, adding that the Armory complex offers a wealth of opportunities but also myriad challenges.

And that explains why the college that moved in 48 years ago is still moving in. 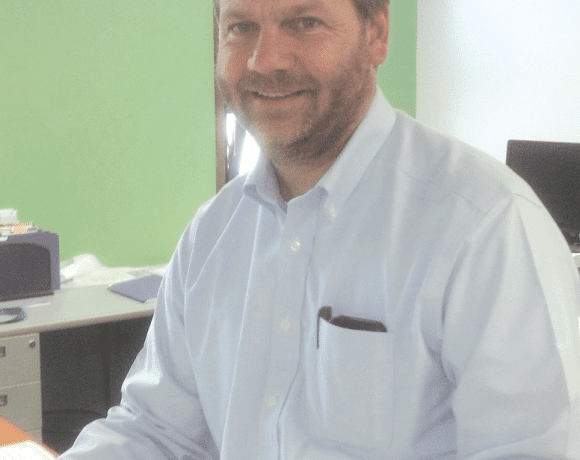