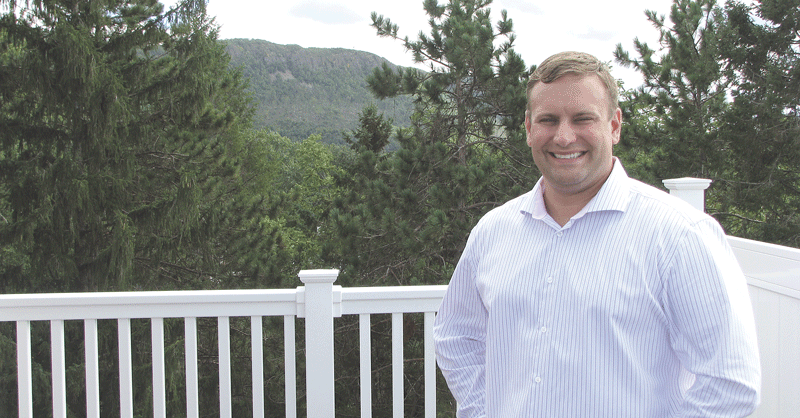 Kevin Perrier, on the roof of Parsons Place.

When Easthampton officials sought to repurpose a 113-year-old elementary-school building, they issued a request for proposals, but received only one response. Fortunately, they liked what they heard, and after an accelerated construction schedule that saw the building gutted and renovated in four months, the former Parsons Street School is now a high-end, 15-unit apartment complex called Parsons Place, and the “calculated risk” its developer took has paid off with full occupancy, from its bottom floor to its striking penthouse roof.

Kevin Perrier called it a “calculated risk” — but he liked the odds of success.

He was standing in the 5,200-square-foot penthouse of Parsons Place, a high-end apartment complex that opened earlier this month inside the former Parsons Street School in Easthampton. That penthouse — considerably larger than the building’s other 14 units — recently became the final space leased.

In other words, the risk paid off.

“I don’t think there’s anything like it in the area,” said Perrier, president of Easthampton-based Five Star Building Corp., which gutted the school and converted it to living space in just four months. Perrier’s other company, Norwich Properties, purchased the property from the city in late 2014 for $10,000.

“It was certainly a calculated risk. It hadn’t been done, but we felt strongly it could be done,” he told BusinessWest. “Based on the feedback we heard, what people were looking for, we were confident we could find 15 families willing to pay a little more in rent to get an awful lot more in amenities. So we were very confident it would be leased in a timely manner.”

Part of the property’s appeal, Perrier said, is a regional dearth of high-end apartments such as these. “It’s more like what you might find in Boston — all high-end cabinets, mahogany floors throughout most of the units, 12-foot ceilings, central air, all-tile bathrooms, high-end appliances … even little touches, like fridges with ice makers and mosaic tile backsplashes.”

Within four weeks of availability, the 14 regular units, measuring 950 square feet, had been leased, while the penthouse was claimed a few days after a recent open house, and residents started moving in at the start of September. 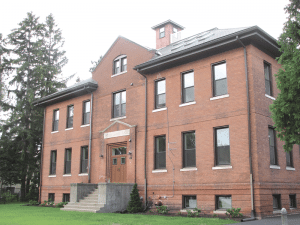 Neighborhood response in the New City neighborhood of Easthampton has been decidedly different from the ire that has greeted Parsons Village, a 38-unit, low-income housing complex a few hundred feet down the road; that complex also opened this month.

“We are very pleased with the amazing renovation of this school building that sat vacant and unused for several years,” Easthampton Mayor Karen Cadieux told BusinessWest, adding that the city is pleased the property is back on the tax roll, while the renovated building and grounds will enhance the neighborhood values and esthetics.

That’s something neighbors were not saying about the development of Parsons Village. But Perrier said a much more positive vibe surrounded Parsons Place, lending a sense of fun to what was a very ambitious schedule. “We had a great crew. We started April 6 and finished August 6. That’s for a complete gut and 25,000 square feet. That’s an aggressive timeline. Everyone stepped up to the plate for us. The original goal was occupancy by November; we beat that by two months.”

When the city issued an RFP last fall for the former Parsons Street School, potential developers were charged with preserving the historic character of the building, along with the usual compliance with land-use boards and commissions, Cadieux said.

“Additional considerations were given to proposals that offered to provide barrier-free handicapped-accessible and/or adaptable residential units,” she added. “We received only one proposal.”

That was Perrier, who saw no hurdles meeting the goals of historical preservation and accessibility. In its finished state, Parsons Place includes one ADA-compliant unit, but all apartments may easily be adapted as such, having been designed with wide hallways and interior spaces.

“The city had quite a few … not restrictions, but strong suggestions about what they wanted and didn’t want,” he said. “One mandatory one was that the building be saved. We tried to meet as many requirements as possible when we put in a proposal, and as it turned out, we were the only bidder on the project.”

Still, “the City Council and the mayor seemed excited about what we wanted to do,” he went on. “No one wanted an affordable-housing project, which this neighborhood just endured; that project wasn’t received favorably by the neighbors. This neighborhood was looking for something other than affordable housing, and we saw an opportunity for a high-end project.”

The idea, he said, was to tap into the segment of renters who might consider Northampton, by offering units comparable to what might be found there, but with more amenities for the price. The penthouse costs $3,500 a month, while the other 14 units are being leased at $1,400.

“It was clear there was a need and a demand for high-end products, things you can’t find in any units around here — dishwashers, central air, stainless appliances, high-end cabinetry, that kind of thing,” Perrier said. “You might hit one or two of those points in rental properties here, but you usually won’t get all of them.”

When tackling the conversion of the school, Perrier said, it helped that it isn’t technically a historic building, and isn’t subject to the restrictions of being placed on such a registry. The elementary school was built in 1902 and expanded in 1908; it closed in 2011.

“We tried to maintain it as much as possible,” Perrier said of the character of the red-brick building, which still looks very much like a century-old school at first glance. “It had storefront glass doors, and we took those out and replaced them with historically accurate doors. In the elevator shaft, we could have gone the less expensive route with cement siding, but we did it with brick instead. 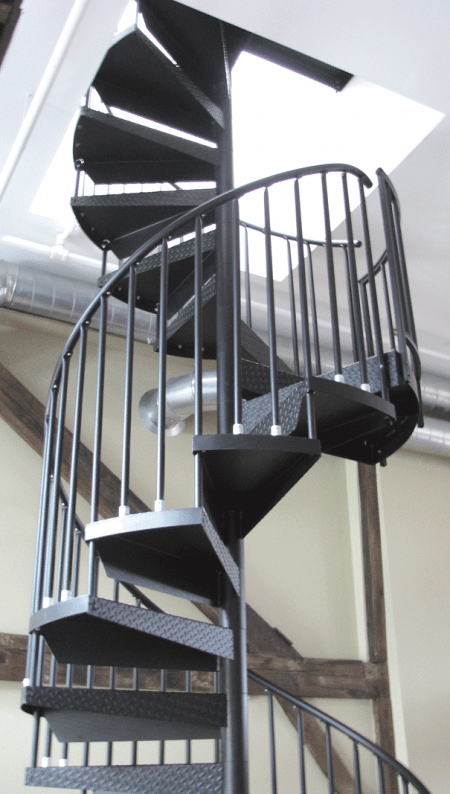 This 20-foot spiral staircase connects the penthouse living room with a roof deck.

“We were able to maintain the exterior look of the building,” he added, “but in the interior, there wasn’t as much to be salvaged. With the asbestos and lead paint, it was almost a complete gut. But we kept many of the original wooden beams in the penthouse, and overall, there’s a happy medium between modern touches and a ’20s vibe. We kept some of the schoolhouse fixtures in the common areas, and certainly tried to keep it as historically accurate as possible in many areas.”

View to a Hill

Those amenities and the quirky aesthetics of the school drew renters from well outside the region, including Vermont, New Hampshire, Connecticut, and Eastern Mass., some of whom work in the Valley and sought a shorter commute.

The penthouse — which has direct elevator access with a key card — is especially striking, with its 32 skylights, three bedrooms (the other units feature one or two), two and a half bathrooms, 17-foot ceilings, a large tub and walk-in shower, higher-end appliances and light fixtures, and in-suite laundry (other renters share a laundry room on the lower level). Then there are dramatic touches like the dark exposed beams and a dramatic, 20-foot spiral staircase connecting the living room with a rooftop deck, offering views of Mount Tom and well beyond.

The project stands in stark contrast to Parsons Village, a project originally rejected by the Planning Board in 2011 after objections from neighbors, but eventually approved in 2012. But city officials have long emphasized the need for all types of housing in a city that has seen incomes and property values rise in recent years but has retained an eclectic, arts-driven vibe as well.

“There’s nothing like this around here,” Perrier reiterated, standing in the kitchen of Parsons Place’s recently leased penthouse. “I’m not even sure you can get something like this in Northampton right now.”