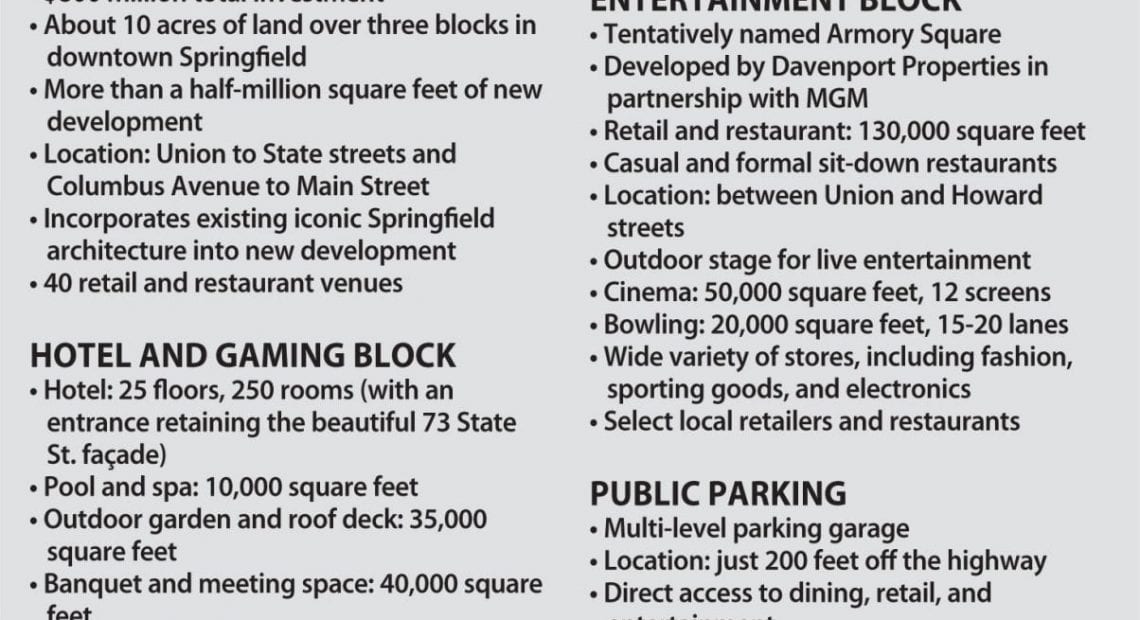 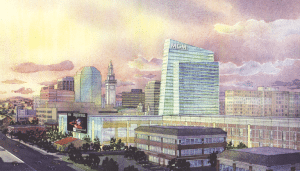 An architect’s rendering of the proposed MGM Springfield.

MGM Resorts International took the competition for a Springfield-based casino to the next stage recently, with the unveiling of an $800 million complex to be built in the city’s South End, between State and Union streets, Main Street, and East Columbus Avenue. Plans call for a 25-story, 250-room hotel, gaming space, and a retail and entertainment district being referred to as Armory Square. MGM Chairman and CEO James Murren summed up the company’s plans by saying, “we don’t want to build a box; we want to build an urban environment.”

As he stood at a podium talking about MGM Resorts International’s plans for a casino in Springfield’s South End, Bill Hornbuckle repeatedly referenced an image displayed on large projection screens in the front of the room.

This was a black-and-white photograph of a section of downtown Springfield from nearly a century ago. And as he discussed that scene, through the magic of technology, the streetscape was transformed into a vivid color image of roughly that same location (see page 41) as it would look after MGM was done creating an $800 million casino, hotel, and entertainment complex there.

And with that, the competition to bring a casino to Western Mass., and, more specifically, to the City of Homes, took a major leap forward.

Indeed, for the first time, a casino developer has put a specific plan on the table. It is known for now as MGM Springfield, and Hornbuckle, the company’s chief marketing officer, is the company official charged with making it happen.

He explained the initiative at an elaborate press conference at the MassMutual Center that drew more than 200 business leaders, elected officials, and scores of media from across the state. He shared the podium with MGM President Jim Murren, who welcomed those assembled by saying simply, “we want to be here; we want to be in Springfield.” 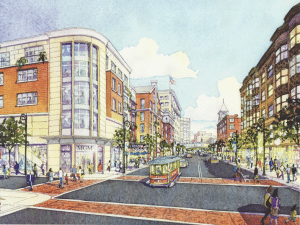 An architect’s rendering of what Springfield’s South End will look like if the planned $800 million MGM Springfield becomes reality. The view is from the south at the corner of Union and Main streets.

The two administrators would go on to explain that, for MGM, which operates a portfolio of more than a dozen major casinos across the country, Springfield is the logical next point of expansion, and the South End location, near I-91 between State and Union streets, Main Street, and East Columbus Avenue, is the most attractive location for such a facility.

As he talked about the proposal, Hornbuckle said the contest to be named the designated Springfield casino project (there are at least two other plans coming together) — as well as the fight that would follow to gain the Western Mass. casino license — will be spirited competitions, and the corporation is ready for what will be a pitched battle.

It has already launched a Web site (www.mgmspringfield.com) that introduces the project and invites input from area residents, and has launched a series of television and print ads announcing the initiative and its role in tornado-recovery efforts. And billboards will soon be appearing with the message: “World Class Entertainment, Gaming, and Dining. HERE.”

“We go hard and fast when we go, and we’re going,” Hornbuckle said. “This is a competition … and we’re in it for the journey.”

As he referenced the old image of Springfield’s downtown and its technology-enhanced morphing into a casino site, Hornbuckle said the juxtaposition of images was chosen by MGM and its marketing team to show how the planned casino complex would effectively transform the old into the new.

Actually, it would blend the old — such properties as the old MassMutual headquarters at the corner of State and Main and the former South End Community Center, for example — and new, including a 25-story, 250-room hotel; shops and restaurants; entertainment facilities, including a movie theater and a high-end bowling alley; and new market-rate housing.

It was also chosen to convey that a new era in the city’s history would be unfolding, one that would, in this case, transform an area — the South End — that had fallen on hard times in recent years and then found itself squarely in the path of the tornado that changed Springfield’s landscape in many ways last June. 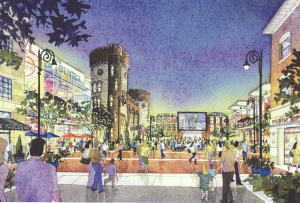 An architect’s rendering of the planned Armory Square in the proposed MGM Springfield.

Plans also call for an approximately 130,000-square-foot dining, retail, and entertainment district, tentatively named Armory Square. It would include about 25 dining and retail venues, including a 12-screen cinema, bowling alley, and outdoor stage, on land now occupied by the South End Community Center and the former Zanetti School on Howard Street.

Those are two properties for which the city will soon be issuing RFPs (requests for proposals), said Hornbuckle, adding that MGM will need to prevail in those contests if its vision is to become reality. In the meantime, MGM has gained control of several privately owned parcels in the development zone, and has many others under contract.

Plans also include 400,000 square feet of market-rate, one- and two-bedroom apartments, intended for young professionals working in the new entertainment district, said Murren, adding that MGM intends to partner with local cultural institutions, with the broad goal of jump-starting a new era of economic development in Springfield that will radiate out from the project onto Main Street and into other parts of the downtown and the city. 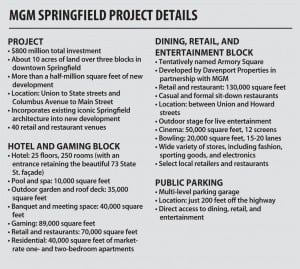 “I want to build a landmark here, and I want to integrate the assets you have already have — you have great bones here in the city,” he told those assembled at the press gathering. “The job we have is to knit all that together. We don’t want to build a box; we want to build an urban environment.

The blueprint for accomplishing all that will come together by borrowing concepts from existing MGM projects as well as from established retail and entertainment centers, said Hornbuckle, who then clicked to a PowerPoint slide that showed roughly how the complex will come together.

The stretch of the site along Main Street will be devoted to retail, offices, and residential buildings, he explained, adding that the hotel would be constructed along State Street, using the historic building at 73 State St. as the main entrance. Parking would be created along the western side of the property, near Columbus Avenue, and the aforementioned Armory Square would be created between Howard and Union streets.

The casino itself? It would be the middle of all this, said Hornbuckle, adding that it would be essentially invisible to those walking or driving by the site.

“It’s a casino you won’t see,” he explained, adding that MGM Springfield is being designed with the casino as just one part of the experience.

“What’s critical about the design is that you can interact, whether it be the hotel, the gaming, the entertainment, or up on Main Street, without having to go into the casino,” he noted. “We’re not forcing you to into that environment; if you want to bring a family to enjoy this, you can. That’s a critical element, especially for an urban casino.”

Both Murren and Hornbuckle stressed that no indoor entertainment area is planned for MGM Springfield. Instead, the company plans to partner with existing facilities such as the MassMutual Center, Symphony Hall, CityStage, and local museums, including those at the Quadrangle, to help drive traffic to those facilities. To that end, a pedestrian bridge has been proposed to link the MGM complex with the MassMutual Center.

Several times during his address to those assembled at the press gathering, Murren said that event marked the start of a conversation, or dialogue, on the company’s plans to take its brand into downtown Springfield.

That dialogue will continue over the next several months as MGM’s plans are finalized and rival plans join the competition for the Western Mass. license.

But company officials already believe they have a winning hand, and they’re betting heavily that the community — not to mention the state’s Gaming Commission — will feel the same way.