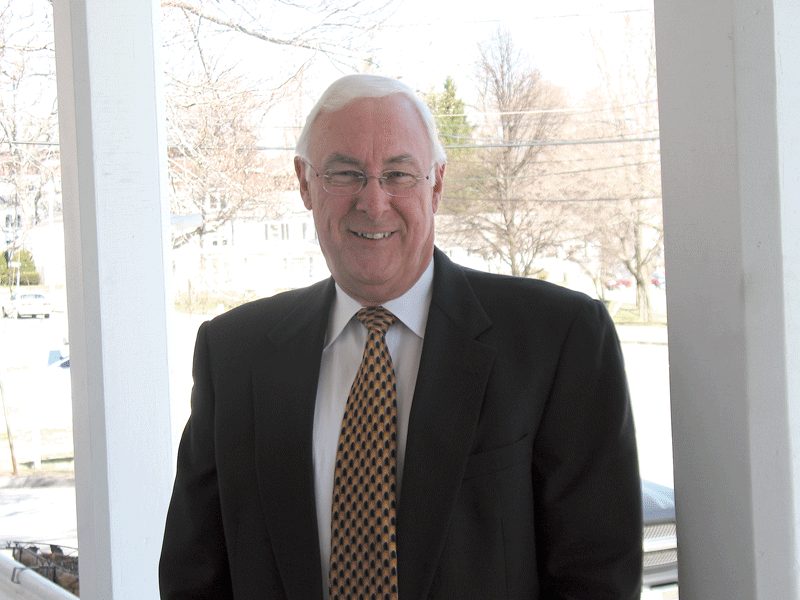 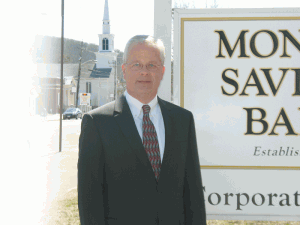 Under the leadership of just-retired President Roland Desrochers, Monson Savings Bank tripled its assets over the past 15 years while adding two branches, a loan center, and a host of retail and business programs. After he announced his retirement last year, the bank’s trustees launched a search for someone with the vision to take MSB to the next level. They think they’ve found that person in Steven Lowell, who says he wants to continue to grow market share while maintaining the community ties that customers have come to appreciate.

Steven Lowell knows something about growing community banks.
As chief operating officer and executive vice president of Cape Cod Cooperative Bank, he saw that institution expand from $150 million in assets to more than $580 million today.
He also knows something about long commutes, for years spending about three hours each day in the car between his workplace and his Central Mass. home.
In his new position as president of Monson Savings Bank, he plans on continuing one of those trends and drastically reducing the other.
“Commuting to Monson isn’t nearly as bad as going to the Cape,” he said. “This has cut my commute in half, so that’s been quite pleasurable.”
That should give Lowell plenty of extra time to contemplate ways to continue a similar growth pattern at MSB, which, under recently retired President Roland Desrochers, has seen its assets increase from around $80 million to $236 million in 15 years. The new man in charge says that’s only a start.
“I like building things, and clearly this bank is at a point where it needs to grow,” Lowell said. “Roland has done a great job growing it to the size it is, but it’s getting harder and harder for a small bank to be able to compete. The bank has built a great infrastructure; now we’ve got to build the size of the bank to fit that infrastructure.
“The opportunity to manage that growth is a huge appeal to me,” he continued. “I had the experience of doing that on the Cape, and I look forward to doing similar things here.”
Desrochers, who will stay on as CEO until June to oversee the transition in an advisory role, is pleased with who the bank’s trustees chose as his successor.
“I felt it was appropriate to provide as much time as possible for the board to make a decision about the individual who would replace me,” he told BusinessWest. “So I announced my retirement to the board last June, and we started the search process last September.”
The bank appointed a search committee and hired a search firm to manage the process and identify a number of candidates to interview. Eventually, they whittled the list to two, and in the end chose Lowell.
“He has a community-banking background, so he definitely fit into our culture,” Desrochers said. “He’s used to working in the community as well, which is an important facet. He’s knowledgable in business, and we felt he would work very will with the management team.”
Lowell said the transition has been smooth.
“Roland has been really helpful, introducing me to people in the community, helping me get ingrained in the culture of the bank,” he said. “We are a community-based organization, and that’s been my background, too. That part of the transition has been really easy. I think I’m the beneficiary of what Roland has set up here.”
Desrochers said the bank’s threefold growth in assets in the past decade and a half are a product of a deliberate, controlled growth plan. As opposed to the rapid branch proliferation of other regional institutions, MSB has added a loan center and expanded from one branch to three (adding sites in Wilbraham and Hampden) during his tenure.
“We’ve had pretty good growth, and it’s been profitable growth,” he said. “I think that’s an integral part of it. You just can’t grow for the sake of growth; you’ve got to make sure you have profitable growth and can maintain and increase your capital position.”
“It was challenging initially as an $80 million institution — talk about economies of scale,” Desrochers added. “We weren’t doing very many retail products at the time, there hadn’t been many loan products, so we needed to expand those areas. We were just a small, sleepy, small-town bank, and there’s nothing wrong with that by any means, but we needed to do something to make sure it existed longer-term.”
Now that Monson Savings has secured a stronger foothold, Lowell intends to shepherd the 139-year-old institution to the next level. For this issue, he spoke with BusinessWest about how he plans to do that, and why he’s feeling positive about much more than a shorter commute.

High Tech, High Touch
Lowell said one of the things that impressed him about MSB was the caliber of its management team — “a really positive sign for our ability to grow in the future” — but also its Internet offerings, from its online banking services to remote-deposit capture for businesses and a mobile-banking platform that’s in development.
“The use of technology is very impressive for a bank of this size,” he said. “They have done most of the things larger banks, including the one I came from, have done; for an organization of this size, we’re really ahead of the technology curve. It’ll be a challenge to continue to do that, but it’s very important. Customers are all about convenience, and technology allows you to be as convenient as the major banks.”
Community banks these days, he explained, must balance strong in-person customer service — traditionally one of their main selling points — with the ease of the online experience, Lowell added.
“That’s the challenge. We do a great job with customers in our lobby — that’s how we build relationships — but we also want to deliver that high level of service electronically. If we can do that, then everyone wins.”
The bank also uses an active Facebook page to reach out to customers. Desrochers recently spearheaded a project to ask customers on the social-networking site to identify nonprofits and charitable organizations they would like the bank to support; MSB made contributions to the top 10 vote-getters, on top of its other giving for the year.
“It was a great program and very well-received,” Lowell said, “and it helps bring us closer to our customers and the community.”
But philanthropy only goes so far in attracting and retaining customers, and Desrochers touts a number of retail initiatives introduced in recent years, such as First Rate Checking, a high-rate savings product tied to a checking account; Cash Back Checking, an account that pays the depositor back when they use their debit card; and NextGen Banking, which targets specific age groups with different features, such as enhanced online and ATM access for college-age customers.
“NextGen Banking has turned out to be quite popular,” he said. “Part of that is financial literacy and teaching younger people how to manage their money in a way that’s responsible and hopefully builds them into good customers for the future.”
Lowell also noted that the bank allows use of foreign ATMs and refunds the fees customers incur by using them — an appreciated service at a bank with only five of its own ATM locations. “A customer on the Cape may have trouble finding us, and it’s important that they have access to our products,” he said.
Desrochers agreed. “Everyone’s looking for convenience, what makes it easy for them,” he said. “That’s also true on the business side. We have cash management we’re able to offer through our technology. It really allows businesses to keep watch over their money and move money around electronically.” 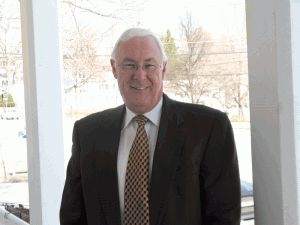 Roland Desrochers described his 15 years at Monson Savings as a very exciting time for the bank.

These products are being offered at a time when banks are starting to see business tick up after some sluggish years, particularly in business lending.
“We’re starting to see a little more demand for commercial loans,” Lowell said. “We see signs that companies are willing to start reinvesting in their businesses and expanding — certainly not at a really fast level, but there are positive signs, and we haven’t seen those for awhile.”
Lending for home purchases, however, remains stagnant. “The big concern is that everyone has refinanced their mortgage, so the residential-mortgage business is really slow,” he said. “Unless we see property values go up and people looking to build new homes, that’s going to continue to be low for a little while.”
That trend is balanced by an ever-growing line of investment and insurance products that make Monson Savings, as Lowell put it, “pretty much a one-stop shop” for customers who want that.
“We have financial services available to both retail and commercial customers,” Desrochers added. “It’s nice to be able to say we have these mutual funds or annuity products. We can also help businesses with 401(k)s, life insurance, things of that nature. Those are important products to be able to offer.”
Overall, it adds up to a strong foundation on which to build, Lowell said.
“The primary goal is definitely to grow the size of the organization,” he told BusinessWest. “We know it needs to be larger in order to remain relevant in the marketplace, so we’re looking to do that.
“We’re also looking to expand commercial lending, and it doesn’t have to be limited to the three towns where we’re located,” he added. “We also need to keep a close watch on expenses; we need to remain profitable.”
Meanwhile, being a community bank, he stressed the importance of continuing the bank’s civic responsibilities.
“Right now, 10% of our bottom line goes back to the community in donations,” Lowell said. “That’s something the bank has done in the past that we’re looking to keep doing as we go forward. It’s a win-win for everyone; we get our business from the community, and for us to give back to the community, I think, completes that deal.”
As for Desrochers, he has no regrets upon leaving in June.
“This is why I’m retiring,” he said at one point, holding up the mug from which he had been sipping.
No, he’s not going into the coffee business. On the plastic container are several photographs of his grandchildren, a 6-year-old and a 3-year-old twins. Despite the regulatory and other challenges in banking today, he’s enjoyed his time at Monson Savings, but at this point in his life, he says he will enjoy the extra time with his family even more.
“I can’t believe it’s been 15 years already,” he said, “but it’s been an exciting time.”
Steven Lowell thinks the future can be just as exciting.

Plan to Make an Impression