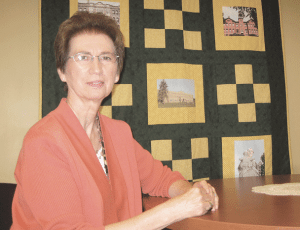 Theresa Kitchell’s quilt, which showcases previous homes for Holyoke Catholic High School, tells only part of the story of this resilient institution.

And like other practitioners of this time-consuming pastime, she enjoys it because it provides relaxation, as well as the ability to tell a story through one’s artistic expression.

The piece hanging in her office at Holyoke Catholic High School, which she has served as principal for the past three years, certainly does that. It features images of many of the historic buildings that were part of Holyoke Catholic decades before that name was ever put over a door — and there have now been several doors that have had that honor.

The only landmark missing is the current mailing address, 134 Springfield St. in Chicopee, said Kitchell, noting that she created the piece before the move to that location in 2008. (The quilt was created to be a featured prize at a fundraising auction, was given by the high bidder to his mother, an alum, and was then gifted back the school after she passed away).

But the quilt showcases only physical structures, Kitchell went on, so it tells only part of a remarkable story. The far more important chapters involve the perseverance and vision required for this school to live on through several forced relocations (more on those later), and the dedication of an alumni base and a current generation of parents who value quality and tradition more than a modern gymnasium and state-of-the-art auditorium — although those may also become reality in the not-too-distant future.

“I think ‘resourceful’ is a great adjective for us because we’ve had to make do for so many years,” said Kitchell, referring first to a move to Granby and the former St. Hyacinth Seminary, and later a move to the current address. “We had to start from scratch, in everything, and the faculty has been incredibly willing to do whatever needed to be done, in whatever facility we found ourselves.”

Today, Holyoke Catholic, with annual tuition of $8,000, boasts an enrollment of roughly 300, with students from 30 area communities and several from China. That number has remained steady in recent years despite a deep economic recession and the latest of those aforementioned moves.

Kitchell and Liz Adzima, director of Advacement, attribute this consistency to recognition among parents that, while the school still lacks some amenities, it is synonymous with value and excellence.

These are exemplified in the price tag — well below what is charged at area private schools — but also in the award-winning STEM (science, technology, engineering, and mathematics) curriculum, multiple partnerships with neighboring Elms College, and strong performing-arts and internship programs, among other initiatives.

“Parents make that decision to send their children here because they know that the sacrifices to be made are well worth it for the quality of education their children will receive here,” said Adzima.

For this issue and its focus on education, BusinessWest turns the spotlight on Holyoke Catholic, which has a rich, intriguing history and — because of that aforementioned resilience and vision — is adding new chapters to the story told by Kitchell’s quilt.

Some of the institutions that came together to form what is now Holyoke Catholic High School can trace their histories back to the late 1800s, said Adizma, noting that Holyoke once had many small parish elementary schools and high schools.

These schools weren’t large enough to field their own sports teams, she went on, adding that, by the middle of the 20th century, several, including Holy Rosary, Sacred Heart, and St. Jerome’s, were bringing their athletes together to compete under the name ‘Holyoke Catholic.’ And as it became increasingly difficult for those smaller schools to exist on their own, discussions intensified about taking the concept of Holyoke Catholic beyond the playing field.

“Through that on-field unity, people started seeing that maybe it was time to come together,” said Adzima, adding that Holyoke Catholic High School was formed in 1963 on the campus of St. Jerome’s, located in the heart of the city’s downtown.

Eventually, however, those facilities became overcrowded and, worse, structurally unsafe — a determination made by Thomas Dupre, bishop of the Catholic Diocese of Springfield, in 2002.

The search for what all agreed would be temporary quarters eventually focused on the 500-acre St. Hyacinth College & Seminary in nearby Granby, said Kitchell, adding that, while the location was not ideal, especially for families in Holyoke, the school managed to maintain consistent enrollment numbers.

And while there was an initial push to raise funds to build a new Holyoke Catholic, fiscal constraints brought a focus on retrofitting an existing educational facility, Adzima went on, adding that sights were eventually set on a former elementary school on Springfield Street in Chicopee, between the Holy Name and Assumption parishes, and only a few hundred yards from Elms College.

The process of retrofitting the facility was completed in the summer of 2008, and the new Holyoke Catholic opened that fall, said Kitchell, adding that the move brings a number of advantages for the school, ranging from accessibility to the natural connection with the Elms.

“The parents have been most supportive; they wanted their children to go to Holyoke Catholic, and they made the move to Granby, which was really inconvenient, and then they made the move here,” Kitchell told BusinessWest. “The move to Chicopee was certainly the most feasible economically, and there were other real pluses; first, we’d be back in an urban setting, and second, we’d be in close proximity to the Elms.”

Elaborating, she and Adzima said the new location, just minutes off interstates 91 and 391, makes the school not only affordable, but also quite accessible, especially to major population centers such as Chicopee, Springfield, and Holyoke.

As for the Elms, that institution brings facilities and collaborative efforts that greatly enhance the value of a Holyoke Catholic education, she said.

The partnership with the Elms only begins with Sr. Mary Reap, the college’s president, who serves on the Holyoke Catholic board of trustees.

It extends to the institution’s library — which extends full privileges to Holyoke Catholic students, who can now take in a number of exhibits and programs, such as last year’s Holocaust exhibit — and the Veritas Auditorium, which has become home to the high school’s performing-arts programs.

However, and ironically, due to construction at the Elms, those programs are utilizing facilities at the former MacDuffie School in downtown Springfield. (MacDuffie relocated two years ago to the former St. Hyacinth’s Seminary.)

The drive to Springfield is somewhat inconvenient, but such headaches are certainly nothing new for loyal parents and alums, said Adzima, adding that the performing-arts program has enjoyed great success.

She explained that students, including incoming freshmen, work throughout the summer to produce the popular annual fall performance; recent shows (there are three a year) have included Hello, Dolly!, How to Succeed in Business Without Really Trying, and Godspell, and this year The Wizard of Oz is on the schedule.

While quality and high expectations are the foundation of the Holyoke Catholic curriculum, and, historically, the English department has been very strong, Kitchell is proud of recent recognition from the state for the science department, which recently earned the 2013 Secretary’s Award for Excellence in Energy and Environment Education.

The award is fitting, she added, since 10 faculty members and 10 students were involved last year in a ‘technology frontier experiment,’ during which teachers and students used iPads daily in all departments to deepen their knowledge of that form of technology in a school setting.

“The use of handheld devices, not just pen and paper, is coming; that’s their world, and we just have to figure it out,” said Kitchell. “Students and faculty have been learning, literally, from each other across the board.”

Another perk of the school’s proximity to the Elms is the college’s advanced-placement program, which allows qualified area high-school students to take up to three college credits each semester in their junior and senior years, graduating from high school with a possible 12 college credits. Offered at reduced-credit cost, the late-afternoon and evening courses are a convenient walk across the street for about 30 Holyoke Catholic students per year, said Kitchell.

In addition to that program, Holyoke Catholic requires every senior to undertake a 50-hour internship at an area business or nonprofit. To fulfill that requirement, they must write a paper about their experience and present to members of a faculty panel.

“This year, we had students in the operating room with a surgeon at Baystate Medical Center, in court with attorneys — one student actually dug into the research and helped solve a case — and they really get put to work,” said Adzima. “It lets them see what it’s like in the real world, and the more time and attention that they give to identifying the correct spot for them, the better experience they have.”

Looking ahead, Kitchell said the school is looking at ways to fill in some of the missing pieces from its bricks-and-mortar presence, including a performance-arts facility and a gymnasium.

Two parishes in that section of Chicopee have merged, she noted, and this development may create opportunities for expansion down the road if the fiscal health of the diocese permits.

In the meantime, the school will continue to carry on and make do, something it has become quite proficient at in recent years, displaying vast amounts of imagination and resilience, skills that are among the many it tries to impart to its diverse student population.

Thus, while Kitchell says there are no plans to add new segments to that quilt on her wall, there are certainly new chapters to be written in the history of a school that has found its place — in more ways than one. 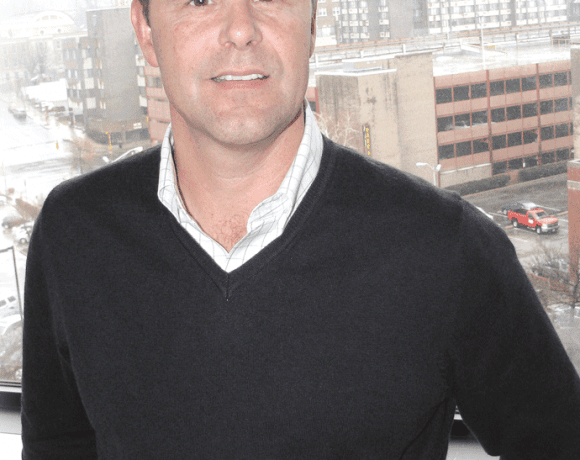