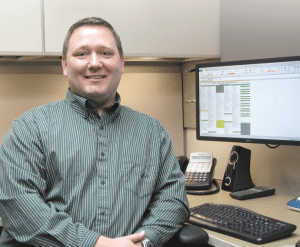 Pressure is replacing two well-traveled highway bridges in one weekend — or losing $1 million for missing the deadline.

But that’s exactly what Northern Construction Service, based in Palmer, is taking on this summer in Southington, Conn., when it lifts the existing bridges off their supports this July and replaces them with new bridges it has been fabricating at the scene for the better part of a year — all within a 56-hour weekend window aimed at minimizing impact on commuters.

“We’ve had this job since last June, and after almost a year of prep, we’re only going to disrupt the public for a weekend,” said Shawn Clark, Northern’s project manager and operations coordinator. “And if it’s not done by Monday, there’s a million-dollar penalty.”

The bridges, which carry eastbound and westbound traffic on Interstate 84 over Marion Avenue in Southington, are 51 years old and in need of replacement, Clark said. Northern won the contract for the $6 million project last spring, and excavation, tree-clearing, and utility work began in November.

The technique being utilized is new to the Conn. Department of Transportation. The new spans are being fabricated on site in staging areas adjacent to the bridges. Interstate 84 and Marion Avenue traffic will remain open during the entire fabrication period, with occasional, temporary lane closures for other work associated with the project.

On the big weekend in July, the pre-fabricated structures will be moved from the staging areas using massive machines called self-propelled modular transporters. The existing bridges will be removed, and the new spans set into place on the existing abutments, which are in good condition. 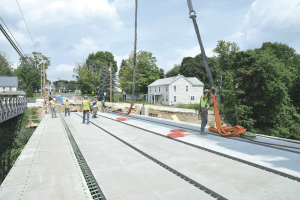 In addition to the $1 million penalty if the project extends into Monday’s morning commute, ConnDOT has included a $250,000 incentive if the new bridges are open before 10 a.m. Sunday. Don’t put it past Northern to make that goal.

“We like to push,” Clark told BusinessWest. “Our company is not afraid to work overtime, generally at our own expense.”

Take the Davitt Memorial Bridge in Chicopee. Northern replaced that span, which connects Route 116 with Springfield Street — an $8.2 million project — 14 months ahead of schedule. The bridge was closed for just over a year and reopened last July.

“In Chicopee, the DOT offered incentives to work through the winter, to work overtime to meet the deadline,” he said, noting that overtime is already common at Northern during good weather.

“It took us seven or eight months to get going on the Davitt Bridge, and we still finished more than a year early,” Clark said, telling a similar story about the $3.7 million project to replace Easthampton’s Manhan Bridge, which closed last June and reopened in October, five weeks ahead of schedule.

“We had that job for probably eight or nine months before we closed the road, making sure everything was in order, utilities relocated,” he noted. “Then we worked overtime, Saturdays, Sundays — and, again, it went well.”

Clearly, Northern Construction specializes in bridges — as well as road and highway construction; concrete construction, including dams, seawalls, and foundations; excavating and grading; water, sewer, and drainage systems; building construction and relocation; and a host of other projects.

The company — owned by John Rahkonen and John Divito, who work out of offices in Palmer and Weymouth, respectively — has grown significantly in its 19 years of existence, employing up to 150 personnel at peak times and boasting about $45 million in projects annually.

“We’ve been growing or at least maintaining, luckily,” Clark said. “The recession was tough on us, but we’ve had work.” 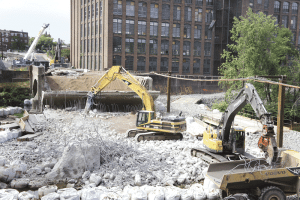 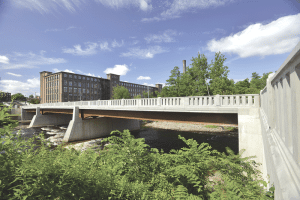 Success stories like the Davitt Memorial Bridge in Chicopee — which was closed just over a year and reopened more than a year ahead of schedule — are due to the exhaustive work Northern does long before a bridge closes to traffic.

As he noted, that work begins long before a road or bridge closes. “From the time you’re the low bidder, you have to sign contracts, which takes a couple of months,” Clark said. That’s followed by research, dealing with utilities, and a host of other administrative tasks before work can even begin.

Northern works for public and private entities in the six New England states and New York, and that diversity is key to its continued success, he added. “Private work has been slow, with the recession, so public work is all we have right now. But Massachusetts is having budget problems, and work has been sporadic. So, last year, we did five jobs in Connecticut; before that, we’d had only one in the company’s history.”

Bridge work is a big issue across New England, with thousands of aging spans in need of repair or replacement. In Massachusetts, the Accelerated Bridge Program, a $3 billion commitment to repair or replace 259 bridges, was launched in 2008.

“There’s plenty of disrepair. That’s why we have the Accelerated Bridge Program,” Clark said. “This is one of the worst states in terms of infrastructure, and you have to do something.”

He added that the state has moved toward more rapid bridge replacements, pre-fabricated structures, and financial incentives for contractors, all aimed at reducing inconvenience to the public.

“It’s a tough field. Bridges are demanding, and you need skilled personnel to do the work,” he noted, adding that companies need significant administrative expertise as well. “Compared to 30 or 40 years ago, there are more rules, regulations, liability — every ‘i’ has to be dotted. I’m not saying that’s a bad thing; it definitely discourages competition to a certain degree. But it also makes it more challenging.”

To perform such work on accelerated schedules, Clark noted, requires a high level of teamwork with each state’s DOT. “We get in people’s good graces by getting it done quickly. Not only does that require the cooperation of everyone involved, the DOT has to be on board with it. We can’t do it without them, and they can’t do it without us; it’s a team effort.”

Northern recently won a 2013 Design Award from the Precast/Prestressed Concrete Institute for Best Rehabilitated Bridge, a $9.4 million project in Smithfield, R.I. that the company completed — of course — six weeks early.

The Stillwater Viaduct over the Woonasquatucket River is a landmark of sorts, eligible for listing on the National Register of Historic Places, both for its association with a massive bridge-building campaign in the 1920s and 1930s and for serving as an example of an open spandrel arch bridge.

When it was rehabilitated in 2012, designers had to be careful to maintain the original design aesthetics. The use of pre-cast concrete not only allowed workers to replicate the original features of the bridge with modern performance, but it was critical to completing the project within a seven-month window. The existing arch rings and pier columns were also restored during construction.

“Maintaining the look of the old bridge was very important to the owner,” said Bharat Patel of Vanasse Hangen Brustlin, engineer of record for the project. “We were able to stay way ahead of schedule without compromising quality, and everyone in the community was pleased with the results.”

Northern Construction keeps people moving in quite a different way when it comes to its long-standing relationship with Six Flags New England.

No, it doesn’t actually build new rides, but it has handled concrete, earth, site, and utility work for a number of new attractions, including this year’s major addition, the Sky Screamer, a swing ride that will tower 400 feet above the park — twice as high as the current tallest ride.

Meanwhile, Northern is versatile enough to have been called upon for emergency road work along the Mohawk Trail in 2011 after Hurricane Irene washed out stretches of the roadway. Following the immediate repair, it won bids for a $6.7 million repair of Route 2 in Florida and a $3.3 million job in North Adams.

“As soon as it hit, we were summoned to go up there,” Clark said. “We have the resources and organization to do it. We know what equipment is needed, and what work can be done without sacrificing other projects.”

It also takes a company that knows how to juggle the bureaucratic demands of both the state and the Federal Emergency Management Agency, which was involved in funding the road repairs. “That’s when you get into submitting invoices; every load of gravel has to be documented,” he explained, adding that the end result was a 700-page document. “You’ve got to coordinate it, do the paperwork, and administer it to get paid in an effortless manner. This was a big event.”

After all, who doesn’t want to be paid?

“Our owners have always insisted that our workers get paid every week for what they do,” Clark said. “And as a contractor, we need to get paid to be able to do that — to recover our money, keep the cash flowing, make sure everyone is getting paid. It allows us to take care of our personnel.

“You hear stories of contractors who don’t pay their wages,” he continued. “There are plenty of great contractors out there, but also companies that have issues. Our employees are our most valuable resource, and we want them to get paid.”

It’s all about strong relationships — between project owners and contractors and employees. After all, Northern Construction knows how to build bridges.

Volleyball International Hall of Fame Strives to Expand Its Presence