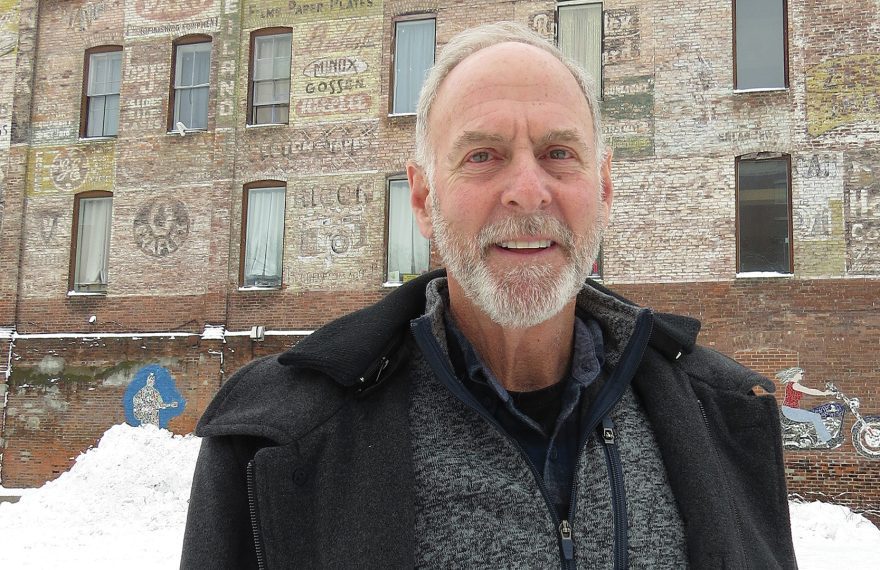 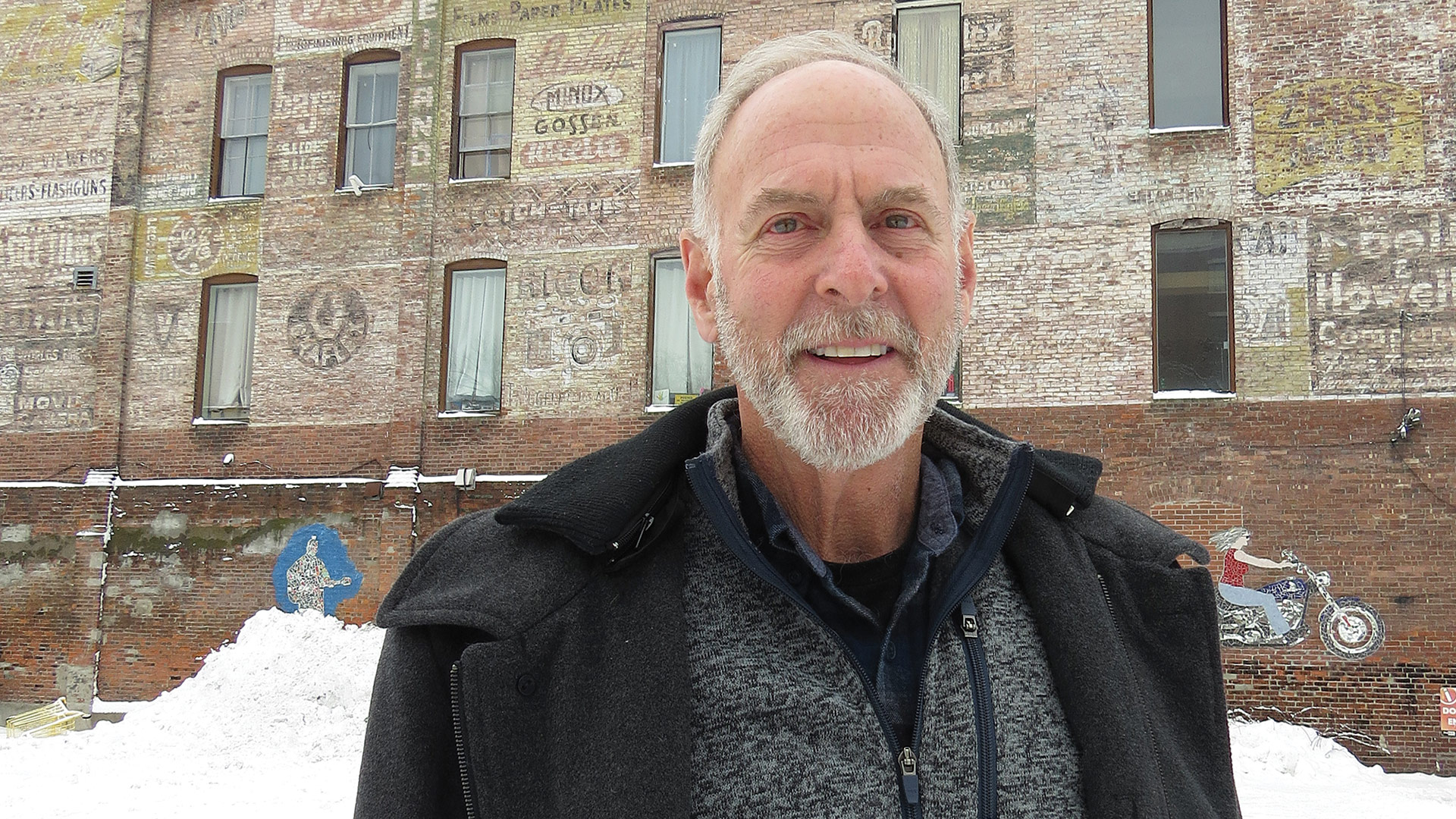 Evan Plotkin says a mural planned for this wall near Stearns Square will pay homage to that area’s important role in Springfield’s history.

Evan Plokin was joking — well, sort of — about just how well his team seemed to manage while he was home battling mesothelioma and rehabbing from complicated surgery to help rid his body of cancer.

“I learned that this place could function just fine without me,” he said, tongue in cheek, noting that his company, NAI Plotkin, completed several deals during those weeks while he was out, putting a cap on a busy year, despite damage done to the economy by the pandemic. “The four months I was pretty much out of action I was thinking the worst, but when I came back, all the deals that were in the pipeline that I thought were never going to close … things suddenly started to happen.”

Overall, this lengthy, ongoing ordeal — he was officially diagnosed with mesothelioma in March 2021 — has been a learning experience on many levels, starting with the disease itself.

Plotkin confessed to knowing little about it when he was diagnosed, other than the only way to be stricken with it is through prolonged exposure to asbestos — or, as he has learned since, through heavy use of talc. And a “review of his life’s story,” as he called it, revealed that he falls into that category.

“I had rashes when I was a youngster, throughout my elementary schools, and I can always remember my grandmother putting the powder on me,” he recalled. “As I got into sports, when I would sweat a lot, I would break out, and the baby powder helped. And I remember when I was playing football in high school, I would douse my shoulder pads with it before every practice and before every game.”

This review of his life and has led to a different kind of learning experience, this one concerning ongoing legal action against Johnson & Johnson — maker of the baby powder he put on those shoulder pads — which he is now a big part of.

“I’m on the creditor’s committee — we just had a meeting recently; five of us are representing 40,000 claimants in this litigation,” he said, noting that these claimants are pushing back hard on J&J’s efforts to form a separate company to capture all asbestos claims related to its baby powder and then, presumably, file bankruptcy. “Every one of us who has this disease wants our day in court, and not have this piled into a bankruptcy settlement.”

While waging battles on these various fronts, Plotkin, who firmly believes he’s on the road to recovery and is now back in his office several days a week, is continuing another fight — his decades-long struggle to return downtown Springfield to the vibrancy he knew when he was young.

Long a staunch advocate for the city and firm believer in the power of the arts as an economic-development strategy — he’s one of the organizers of the annual summer jazz festival in the city — Plotkin said considerable progress has been made in recent years to make Springfield a more attractive place to live and work, but there is still much to be done.

He talked about the need to become creative with the hundreds of thousands of square feet of vacant office space in the city (again, see the story on page 38), to renew and escalate efforts to revitalize the properties on Main Street across from MGM Springfield, and to continue work to use the city’s open spaces, especially its parks, to draw new residents — and businesses as well.

With that, he turned his attention to his latest project, a giant mural that will occupy a wall facing Stearns Square on Worthington Street.

Working in tandem with John Simpson, an art professor at UMass Amherst whose murals grace Elm Street and the I-91 viaduct, as well as the Springfield Improvement District, Plotkin, through a nonprofit he created called City Mosaic, won a grant to transform that wall — currently featuring faded images of cameras and related products sold at a store there in the 1940s — into a history book of sorts.

“It’s going to be a composition — we’re going to give a nod to many of the historic and important people from Springfield, right up to the present,” he said. “It’s going to be the largest mural in the city.”

For this issue, BusinessWest talked with Plotkin about the many battles he’s waging, and the progress he’s making with what could be considered the big picture — figuratively, but also quite literally.

Plotkin, who has long prided himself on taking good care of his body, exercising, and eating the right foods, said his cancer diagnosis nearly a year ago caught him off guard and left him searching for answers.

“To suddenly be told that you have this terrible disease … that was very traumatic,” he said, adding that, while he became consumed with understanding how he contracted mesothelioma, the more immediate concern was confronting the disease.

He underwent what is known as a HIPEC (hyperthermic chemotherapy) procedure in August. After removing visible tumors through standard surgical procedures, a surgeon will administer HIPEC treatment, during which a heated sterile solution — containing a chemotherapeutic agent — is continuously circulated throughout the peritoneal cavity for up to two hours.

The 10-hour procedure was followed by three months of rehabilitation, said Plotkin, noting that he lost more than 50 pounds through the ordeal, suffered a few setbacks while recovering, and endured a few trips to the emergency room.

But he believes the worst is over and that he is on the road to recovery.

“I’m feeling really good right now, so I’m very optimistic about my future,” he said. “I feel almost as good as I did before the surgery; I just have to watch it … but I’m back to normal, and everything is good for me.”

While knocking on the nearest available wood, Plotkin noted there isn’t much available data on HIPEC. “And the doctors and the oncologists — they don’t have any predictions for you,” he went on. “They just say they want to take film every six months and go from there.”

Meanwhile, he said many others in his situation have not been as fortunate in their fight.

“You hear some of the stories from some of the people you meet, and their stories are not as good. I just learned about a 28-year-old boy who had the surgery who died from complications — kidney problems after the surgery.”

Such stories put more emphasis on the ongoing lawsuits against Johnson & Johnson, which, by many accounts, involve more than 38,000 claimants and nearly $4 billion in damages being sought.

At present, that fight is on a pause of sorts after a bankruptcy judge in North Carolina halted the lawsuits against J&J after that company formed a subsidiary in Texas, known as LTL, to absorb the parent company’s asbestos liabilities. LTL promptly filed for bankruptcy in North Carolina.

The move, known as a ‘divisive merger’ as well as a ‘Texas two-step’ (because that’s where LTL was formed) has been slammed by lawmakers, including U.S. Sen. Elizabeth Warren, and Plotkin said claimants in the various suits are girding for a protracted battle.

“Everyone is lawyering up, and they’re ready to have hearings,” he said. “All this is going to be hopefully resolved, one way or another, in February.”

While the court fight against J&J is now capturing some of Plotkin’s time, he also has his work — a broad phrase, to be sure — keeping him busy.

He said he worked remotely for some time but is now back in his office at 1350 Main St., the one with the view facing south toward MGM Springfield. And he referenced what he can see out his window when talking about the major challenges still facing Springfield.

He said that, when MGM was originally proposed, the thinking — if not the promise — was that the casino, with its front door on Main Street, would bring more vibrancy, not to mention additional commercial development, to both sides of the street and that broad area.

That hasn’t happened yet, in part because most all casino visitors have been entering and exiting through the parking garage (especially during the pandemic), leaving little foot traffic on Main Street and, therefore, a minimal trickle-down effect.

“People go right back in the garage, and they’re out of here,” he said. “And that needs to be fixed; we need to get those people into the downtown.”

Turning his attention back to Stearns Square, he said that area has seen progress on several fronts in recent years, including the park itself, which underwent major restoration efforts a few years ago. Around it are new businesses, including Dewey’s, a jazz club; the promise of new restaurants; and prospects for that area once again being the centerpiece of a walkable city.

The new mural will be part of all this, he said, adding that it will turn back the clock in many respects.

“In one part of the mural, there’s going to be an image of what Stearns Square looked like more than 100 years ago,” he explained, noting that this look back will show how the ‘Puritan’ statue now at the corner of Chestnut and State streets near the Quadrangle was originally in Stearns Square, with the Puritan facing a globe at the turtle fountain in the south end of the park.

“The narrative behind that is the fountain has a giant globe on it with fish and turtles around it, and there’s water,” he explained. “It was the Puritan looking at the new world, and he knew he had to cross over the water to get there.”

As he related the history of the park and spoke about his mural project, Plotkin said he’s always believed the Puritan statue should return to its original setting.

He admits he’s probably not alone with that view, but he acknowledges that such a move would certainly be a longshot at this point and an uphill battle.

Speaking of uphill battles … he’s been involved with many of them lately, from his fight against mesothelioma to the drawn-out court skirmishes with Johnson & Johnson, to his campaign to revitalize downtown Springfield.

All of them are ongoing to one extent or another, and Plotkin is waging them the only way he knows how: with passion and determination.