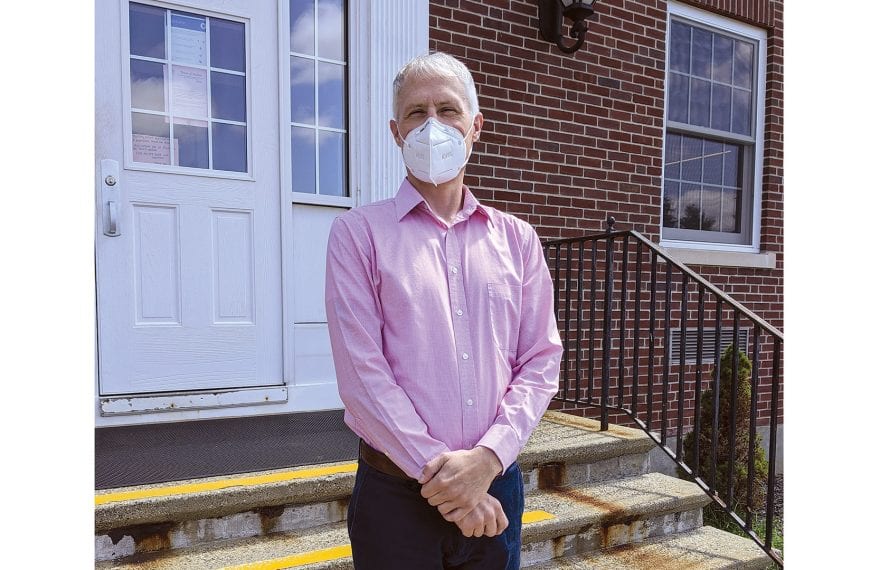 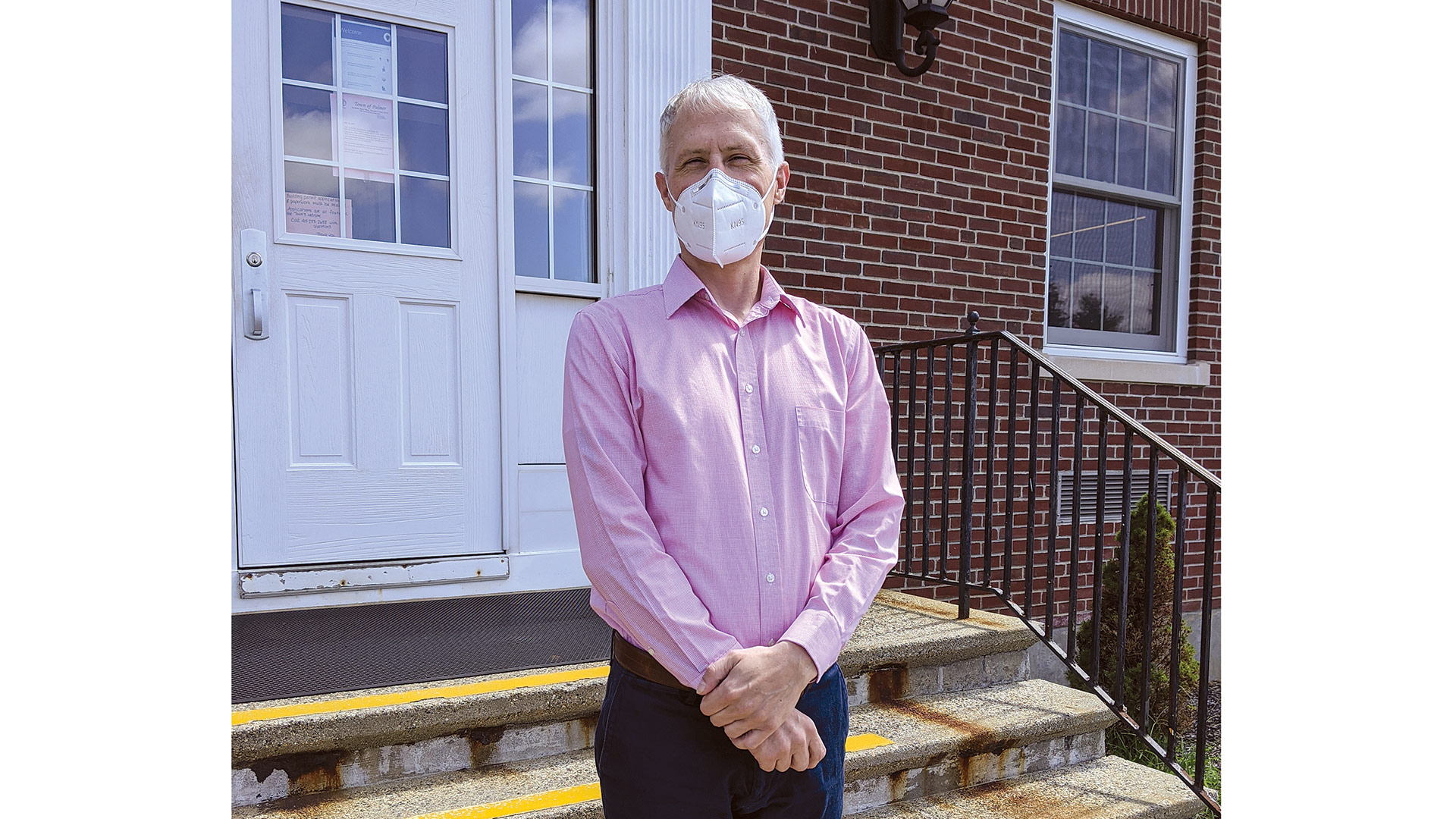 Ryan McNutt says a burgeoning cannabis sector is just one of many positive developments in Palmer.

If there’s one thing capitalism doesn’t like, Ryan McNutt says, it’s uncertainty. And COVID-19 has certainly injected plenty of that into the regional and national economic picture.

But unlike more densely populated areas like Boston, where the death toll — and accompanying anxiety — are higher, leading to a slower return to acitity, Palmer has seen only seven coronavirus-related deaths. Even now, only nine people are under some sort of quarantine order, following a long stretch of no cases at all.

“I’m encouraged that our busiest department right now is our Building Department; in fact, I’m going to add another building inspector,” he told BusinessWest. “And some other Western Mass. communities are seeing that as well.”

Local projects run the gamut from a bar on Main Street being converted to a pizza restaurant to Adaptas Solutions adding a building to its complex in the Palmer Industrial Park.

“It’s a growing business — even in this pandemic, people are still adding jobs, adding capacity, adding new product lines,” said McNutt, noting that Sanderson MacLeod, which specializes in manufacturing twisted wire brushes, has grown recently by shifting to new product lines, some of them medical, during the pandemic. “Capitalism is creative destruction. People are going to enter new markets, or enter existing markets where others couldn’t fill those markets, and Palmer will benefit from that.”

The cannabis sector certainly shows no signs of slowdown, with four businesses — Altitude Organic and Heka Health on the retail side and and MINT Cultivation Facilities and the WingWell Group on the cultivation side — getting ready to open in the coming months.

“I’m encouraged that our busiest department right now is our Building Department; in fact, I’m going to add another building inspector.”

“This will be an amazing amount of unrestricted local revenue,” McNutt said, though he was quick to add that most neighboring states still haven’t legalized cannabis. “Once those states or the federal government legalize, there will be diminishing returns. We’re seeing hundreds of thousands of dollars coming in from other states.”

That said, he expects the industry to be a net positive for Palmer’s tax base for a long time to come, even if it’s hard to predict the exact impact. “There’s obviously a floor of cannabis users, but what is the ceiling?”

It’s a question he can apply to many types of economic development, including a long-talked-about rail line that could eventually be a game changer for this community of just over 13,000 residents.

When McNutt, the former city manager of Claremont, N.H., took over in Palmer last July, economic development was a key focus from the start.

“Economic development is important, making sure we grow the tax base and make it sustainable for the people who live here but also create opportunities to attract new people coming in,” he said. “We can do that to some degree ourselves, and then there are macro things happening, like the east-west rail line. Some days I’m more confident that will come in, some other days I’m less confident. I try to stay on the optimistic side of it.”

Palmer at a Glance

That said, “if our folks at the federal level are really looking at this country, starting to talk more and more about having a national infrastructure package, then I think the east-west rail line is more promising, because it will take federal money; it will take being a component of a larger national infrastructure package to make it doable. But that east-west rail line would be so transformative for the Commonwealth of Massachusetts.”

In recent years, the Palmer Town Council established a citizens’ advisory committee and contracted with the UMass Center for Economic Development to study the merits of an east-west passenger rail stop in Palmer. The town’s position, roughly central to Springfield and Worcester, and also at the center of a market that extends north to UMass Amherst and the Five Colleges and south to the University of Connecticut, makes it a point of connection in many directions that would benefit from expanded rail service.

In addition, McNutt noted, Palmer has a workforce of close to 8,000 people, and 85% of them work outside of Palmer, mostly in Worcester but more than 100 in Pittsfield. A rail line would ease the commute for many, while individuals who want to work in the Boston area, where housing prices can be exorbitant, could instead choose to live in towns along the rail line, like Palmer.

“There are a lot of good opportunities that make Palmer an attractive community, as long as we market ourselves correctly,” he told BusinessWest. “We’re making sure we’re doing everything we can so when a national infrastructure package gets introduced, we will be shovel-ready.

Speaking of infrastructure, Palmer boasts nine bridges that span four rivers, all built around 80 years ago with a life expectancy of about 50 years, he said. The cost to repair them is about $3 million per bridge, on average, and with the entire municipal budget, including schools, around $40 million, “it’s not like we have the internal capacity to just fix those bridges.”

The town submitted a $7.5 million grant application to the federal BUILD program last year to repair a couple of those bridges, competing with $10 billion worth of applications — across all 50 states — for about $900 million in funding. Despite those odds, Palmer made it to the final round of consideration before being dropped, and McNutt said the region’s federal lawmakers encouraged him to reapply this year. He’s cautiously optimistic the news will be better this time around.

“I think both Democrats and Republicans agree we’ve let huge swaths of this country fall apart since the end of World War II. Bridges, ports, airports … we’ve got to get on top of this. Everyone understands the deficiency across the country is bipartisan. The amount of jobs that could will be created would keep people working for the 20 years fixing the stuff we’ve let go for 70 years. And borrowing money has never been cheaper.”

Bang for the Buck

McNutt said he’s always thinking in terms of economic development, and its importance in communities with tax-rate increases constrained by Proposition 2½.

“I’m conservative when it comes to taxpayer resources,” he said. “I grew up in Massachusetts, and I know the strain Proposition 2½ places upon communities and municipalities, considering the rising fixed expenditures and costs we face, especially on the school side. And at the same time, I really believe that taxpayers pay a lot of money. I’m very keen on making sure people get value for that taxpayer dollar, so we’re always looking for grants and efficiencies in doing business, to be able to control those costs.”

For that reason, he went on, it’s important for towns of Palmer’s size and demographics to attract an influx of younger residents, and expanded rail could help boost that effort.

“Everybody who’s aging and on a fixed income, they really have a limited runway in what the property taxes can get to,” he noted. “That’s something that’s always my first focus — what is the tax base, what is the tax rate, and what is the economic capacity to pay it? How quickly do we need to find new revenue to support municipal operations without having everything fall on the backs of the retiree who’s lived in Palmer their whole life, and not necessarily getting new revenue themselves?”

Fortunately, even during a pandemic, growth is possible — and, in many cases, happening — and the promise of east-west rail service only boosts McNutt’s sense of what’s possible. While his confidence on that front may waver, depending on the day, his belief in Palmer’s potential — and its ability to weather the current storm — certainly does not.