Sleeve Gastrectomy Is the Hot Option in Weight-loss Surgery 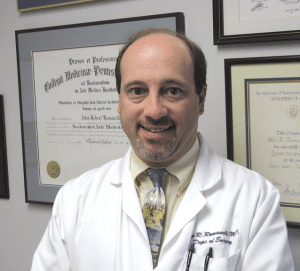 Dr. John Romanelli says sleeve gastrectomy is “elegant in its simplicity,” offering the effectiveness of gastric bypass, but with much lower risk.

Surgically shrinking the stomach to combat obesity is nothing new in the medical world.
But the options for doing so are looking better all the time.
Specifically, sleeve gastrectomy has begun to overtake gastric-bypass surgery and gastric-banding procedures as the surgical weapon of choice, boasting comparative effectiveness with far fewer side effects.
“This operation is elegant in its simplicity,” said Dr. John Romanelli, medical director of the Weight Loss Surgery Program at Baystate Medical Center. “Anyone in the public can get this. We make the stomach smaller, and the way we do that is, we take out everything but the lesser curvature side of the stomach. In other words, we make a sleeve or a tube of the stomach the width of the esophagus, which comes down until it gets to the bottom of the stomach.”
Unlike gastric bypass, which moves a portion of the small intestine, sleeve gastrectomy is performed only on the stomach itself, he noted, so the digestive process is unaffected. “The intestine is left undisturbed, so it’s closer to gastric banding in terms of digestion, and closer to gastric bypass in terms of performance.”
The procedure, which is irreversible, reduces the stomach to about 25% its original size, thereby suppressing appetite in the same way gastric bypass or gastric banding do, said Dr. Andrew Lederman, director of the Berkshire Medical Center Weight Loss Surgery program.
Sleeve gastrectomy was originally performed as a modification to another bariatric procedure, the duodenal switch, and then later as the first part of a two-stage gastric-bypass operation on extremely obese patients for whom the risk of performing gastric-bypass surgery was deemed too large, he noted. The initial weight loss in these patients was so successful, it began to be investigated as a standalone procedure. Today, it’s the fastest-growing surgical option for weight loss in North America.
The reduced impact on digestion is only one reason why sleeve gastrectomy is attractive to patients and surgeons, Romanelli said.
“From my end of things, very simply, the complications are so much lower than bypass or banding. As one of my colleagues said, ‘it’s like bariatric surgery, except you get to sleep at night.’ That’s key; most surgeons report complication rates of 20% to 30% with gastric bypass.”
He explained that there might be 10 or so little things that could go wrong with bypass, and while each may happen only 2% to 3% of the time, combined, the odds add up. With banding, complication rates are 5% per year, and it’s not uncommon for patients to have to undergo repeat procedures.
“It’s easy for patients to understand, easy to perform, with a minimum of complications,” Romanelli told BusinessWest. “In a lot of respects, it’s the holy grail of operations.”

Who Qualifies?
Sleeve gastrectomy uses a stapling device to create a thin, vertical sleeve of stomach, with most of the original organ then removed. It differs in many ways from both gastric bypass, which divides the stomach into a small upper pouch and a much larger ‘remnant’ pouch and then rearranges the small intestine to connect to both; and gastric banding, which incorporates an inflatable band around the upper part of the stomach to create a smaller pouch. But all three procedures have the same goal: to limit food intake while creating a sated feeling.
Romanelli performed his first sleeve gastrectomy in 2006, and it became more common in 2008 and 2009 as more insurers began covering it. “Success bred success,” he said, “and more patients started asking for it.” By 2010 and 2011, the procedure had gained wide approval, and virtually all payers were on board.
Lederman said people considering weight-loss surgery must have a body-mass index greater than 40, between 35 and 40 with two weight-related health risks, such as diabetes, high blood pressure, high cholesterol, cardiac disease, obstructive sleep apnea, arthritis and joint pain, and incontinence, among others. Typically, candidates are 100 pounds or more overweight, and have already tried other options to lose weight.
He added that, when surgical patients begin losing weight, those obesity-related medical problems often disappear; in fact, 86% of diabetics improve with bariatric surgery, while 74% of type II diabetics are effectively cured of their diabetes.
Romanelli said Baystate’s standards are similar, and he’s particularly intrigued by candidates who present with those ancillary medical issues.
“Those are the people I’m more interested in because we can make those diseases go away and add 10 years to their life,” he said. “I don’t care what dress size they wear; I want them to throw the pillbox in the garbage. They desperately need that.”
As for the age range, typically Romanelli performs sleeve gastrectomy on those between 18 and 65. He said 18- to 21-year-olds are often an underserved population in healthcare in general because they’re transitioning from a pediatrician to an adult doctor and often don’t have a primary-care physician. But it’s important to establish a surgical track record with that group to determine whether even younger patients would be good candidates for the procedure.
When talking about 16- and 17-year-olds, he continued, “the problem is the psychological component; kids aren’t at maturity, so you’ve really got to be careful. A lot of adolescents have serious emotional problems and are probably not suitable candidates.”
In addition, he added, “we’re sifting through much more variable family dynamics.” For instance, if a teenager lives in a house with two morbidly obese parents who do not plan to change their lifestyles, that’s not an ideal environment for gastric surgery.
The upper age limit isn’t set in stone, either, Romanelli said. “It’s not like, on their 66th birthday, they no longer qualify. But a fair amount of data shows that cardiac diseases don’t go away as easily when they turn 65. They’ve already got hardened arteries; the damage is already done.” Meanwhile, complication rates rise in older patients as well.
“But someone who is, say, 67 and in reasonable health, if they want weight-loss surgery, we wouldn’t turn them away. Age 70 has been my limit, but others have gone up to age 80, which I think is a bit excessive.”
That said, Romanelli told BusinessWest, “I’ve done more surgeries on 65- to 70-year-olds in the past year than ever before. There are a fair number who are healthy. But we do take a closer look at them. I have medical colleagues who work with us to give them a once-over before we put them through this elective operation.”

Risk and Reward
All surgery involves risk, Lederman stressed, and even with the reduced odds of complications in sleeve gastrectomy, patients still undergo a medical and psychological evaluation to determine if they are healthy enough to undergo the procedure. Meanwhile, all types of gastric surgery require serious lifestyle adjustment.
“Weight-loss surgery was not an easy way out,” said Tracy DiGrigoli, one of Berkshire Medical Center’s gastric-surgery patients. “I have to make an effort every day to make the right choices in what to eat and to exercise.”
Added patient Michelle Simon Grady, “there are days I get down, but I keep a picture of myself 100 pounds heavier, and people will see me and say, ‘you look wonderful. How do you do it?’ Well, it’s not easy. I eat in moderation, not binging the way I did before.”
Meanwhile, even sleeve gastrectomy carries some drawbacks, Romanelli said. Nausea is common during the first six weeks following the surgery; for some patients it’s profound, while others have a relatively easy time.
But, buoyed by their own research and desire to lose triple-digit weight, patients are increasingly clamoring for this relatively new option.
“I would say 50% who come in are already asking for this operation,” Romanelli said. “The bottom line is, if you’re going to have an operation, the results are about as good as bypass, but it’s a lot safer.”
He went so far as to predict that gastric banding will become relatively rare within three to five years. “I do think diabetics do better with gastric bypass, but everyone else will get sleeves. I think that’s where we’re heading. I’d like to tell you that one operation fits all, but I’m not convinced; it’s not that good, to where we’d do that and nothing else. Patients should have a choice.”
Indeed, “I don’t go out of my way to encourage banding, but if a patient wants it and it’s reasonable, I’ll do it,” Romanelli said, noting, for example, women who want to get pregnant at some point in the future; they can have the band deflated during the pregnancy and tightened afterward. “So there’s an adjustability factor for women of childbrearing age. And bypass is good for people with metabolic disease. But for most people, sleeve gastrectomy is becoming the most popular.”
“Between its effectiveness and relative safety, it’s really the best of both worlds,” he told BusinessWest. “I know that makes it sound too good to be true, and maybe five, 10, 15 years from now, like all things in the media, people will be saying, ‘yeah, that’s too good to be true.’ But the results have been great, and patients are happy. They come in and say, ‘I can’t believe how easy this is!’ I never hear that with gastric bypass. I never hear that with banding patients. But I always hear it with sleeve patients.
“They can eat what they want, just less,” Romanelli concluded. “So they keep the same quality of food and lose weight every week. Who wouldn’t want that?”