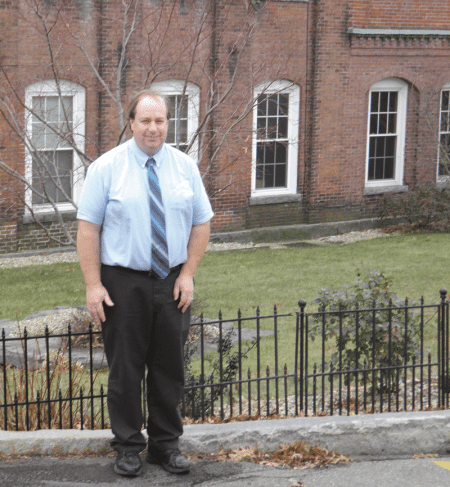 Stuart Beckley says Ware is on the cusp of a rebirth.

“Ware is somewhere worth investing in.”

That’s the new tagline for this Hampshire County community of nearly 10,000 people. That statement is already true, said town officials who spoke with BusinessWest, but a host of initiatives are underway to make it even more so, and to make the slogan resonate with those who hear or read it.

Indeed, major efforts are underway in Ware to stimulate growth and economic development, projects focused on everything from increasing access to higher education to expanding public transportation.

“There’s a lot going on, and it’s an interesting story, but no one entity is responsible; it’s a core effort aimed at revitalization,” said William Braman, president of the Ware Business & Civic Assoc., or WB&CA.

Tracy Opalinski agreed, and said several initiatives were initiated or advanced last year, when the Edward and Barbara Urban Charitable Foundation decided it wanted to do something to make a significant impact in the town.

Opalinski, a trustee of the foundation, told BusinessWest it gave the town $45,000 to hire community marketers to provide a visioning statement, community branding, wayfinding, and economic-development services, and since that time, the foundation has donated another $50,000 for execution of the wayfinding system, which includes logos and new signage.

Progress began after the initial donation was made, and Arnett Muldrow & Associates Ltd. was chosen via a request-for-proposals process.

“They’ve done this for more than 180 mill towns in the country,” Opalinksi noted, adding that the firm mailed a survey to business owners and got a 65% response, held 15 focus groups, and conducted 50 interviews with a cross-section of people from the community that included representatives from businesses and industries, youth, retired residents, outdoorsmen, and artists, to discover what they wanted and needed in terms of services.

Arnett discovered an untapped potential for new and expanded restaurants to make $24 million and small to medium-sized businesses to make $139 million in sales each year.

“They found a need for a small, independent furniture store, a family and women’s clothing store, and an outdoor store,” Opalinski said, adding that Ware is a hub for the surrounding 15 towns in the Quaboag region.

The project was completed in April, and one of the most significant suggestions involved establishing a community-college satellite program, since education and workforce development are critical to economic stability and growth. Coincidentally, the WB&CA had begun working on the same goal four months earlier.

She added that the WB&CA has a number of teams, including one that does advocacy work for businesses, and another group focused on helping property owners on Main Street fill empty space. That subcommittee contacted Greenfield Community College, Quinsigamond Community College in Worcester, and Holyoke Community College, and asked if they were interested in establishing a satellite site in Ware.

The reaction was positive, and since Ware falls under HCC’s geographic territory, it has taken a lead role in the project, although the other two schools and Springfield Technical Community College are involved and contribute to what will be known as the Community College Educational Incubator.

“This is the first time in history that four Massachusetts community colleges have worked together on a project like this,” Opalinski said, noting that many businesses have contributed to the effort, and the facility will open in February in a space donated by a business in a prime location on Main Street.

“Businesses in this area are starved for qualified employees, so we’re trying to create our own feeder program and build a base so people can live and work locally instead of having to move far away or commute to find employment,” she noted.

For this, the latest installment of its Community Spotlight series, BusinessWest looks at the many initiatives taking place in Ware and how, collectively, they make that new marketing slogan ring true.

As officials in Ware noted, progress is being made on a number of fronts.

Town Manager Stuart Beckley noted that an international manufacturing firm known as G&G Medical Products recently purchased an underutilized mill that was owned by American Disposables and is investing about $1 million in the building.

He said the structure was run down, and the town just approved a 10-year tax break for the company to rehabilitate it and move in. That equates to about $6,500 each year, in addition to assistance the company will receive from the state.

“The purchase took about a year,” Beckley noted. “We worked closely with the company, and they told us they plan to add 70 employees over the next five to 10 years, which is huge for Ware.”

He added that workforce development is a primary focus for officials.

“This is a working-class town with lower incomes than most of Hampshire County, so jobs are important,” Beckley said, adding that some businesses are in the process of downsizing. For example, Kanzaki Specialty Papers recently put in a new treatment plant that allows for more efficient operations.

“Over time it will set them up for new products, but it has cost us 25 jobs in the last year,” he noted.

In addition, Baystate Mary Lane Hospital may move its inpatient services to Baystate Wing Hospital in Palmer, which would eliminate 35 more jobs.

However, hospital officials have approached the town and are working with them and local service agencies to identify other potential uses for that space.

“We hope that, since Baystate owns other hospitals, it will bring its services here or enhance the emergency room in Ware; it’s very important to the town as well as to the other 15 communities in the Quaboag region,” Beckley continued, explaining that Ware is one of the major commercial and service hubs for these small, outlying towns.

While efforts are being made to retain and create jobs, other initiatives, and especially the program involving area community colleges, are designed to help ensure that a qualified workplace is in place.

Initial offerings will include free basic education classes and workshop-training certificate programs in culinary and hospitality, which will run for eight to 12 weeks. Organizers hope to add a certified nursing assistant program in the spring, along with a bank of computers next fall that people can use to register for college or to take classes, since not everyone in the region has access to a computer.

“The goal is to offer coaching, enrollment, and certificate programs to students in the Quaboag region because towns such as Hardwick and West Brookfield have the same transportation issues as Ware. It’s located at the outermost corner of Hampshire County, so there is no viable transportation between Springfield or other cities aside from a car,” Braman said.

Opalinski added that many working people already travel a half-hour or more to get to work and are unlikely to drive an additional hour back and forth to college classes in the evening, even though it could improve their lives. Meanwhile, although people can take online courses, only 30% of students complete programs on their own. However, studies show that adding an instructor and fellow students, which will happen in Ware, pushes the graduation rate to 90%.

Meanwhile, other forms of economic development are taking place. As one example, efforts are being made to market Ware as a place with great recreational opportunities, since the access points to the southern portion of Quabbin Reservoir are in town.

“We plan to stage a fishing tournament in 2017 in partnership with the Quabbin Reservoir; it’s a hidden jewel and has been named the 37th-best spot in the country for bass fishing,” Beckley noted, explaining that the tournament is one of a number of activities on the drawing board that will focus on the outdoors and scenic beauty of the town.

“Ware is a great place to live; housing is very affordable, and our public schools are about to get a very positive accreditation. The report will show how much has been done in the past five years in terms of creating quality education,” he continued, explaining that, in the past, Ware lost many students to regional school systems due to a lack of programs, but that is expected to change due to the addition of new technology, advanced-placement courses, and strengthening of basic coursework.

The town manager describes Ware as a “community that cares,” which is highlighted by the amount of effort residents and businesses are putting into current revitalization efforts. “There is a lot of local pride and belief that the community can and will grow,” he said.

Along with measures taken to create a new master plan for the town, which is expected to be complete next year, marketing the Quabbin Reservoir as an ideal place for recreation that includes fishing, hiking, hunting, and boating will continue.

Improving public transportation is also a recognized priority. “There’s also an effort underway to collaborate with a group called Growing Transit & Growing Communities that is made up of businesses and municipal leaders from the 15 towns in the Quaboag region,” Opalinski said, adding that the Quaboag Valley Community Development Corp., Ware Business & Civic Assoc., Behavioral Health Network, Citizens for Palmer Rail Stop, and two regional planning commissions have banded together to improve and add to public transportation offerings and meet on a regular basis with the state Department of Transportation Rail & Transit Division to explore existing models and develop unique solutions for transportation.

“Ware is a special place that’s about to undergo a rebirth and blossom,” Beckley said as he summarized all that is taking place and might transpire in the years to come.

Opalinski concurred. “People and groups were doing good things on their own, but now we are supporting each other and working together,” she said. “As a result, Ware is poised for tremendous growth and development.”

Ware at a glance 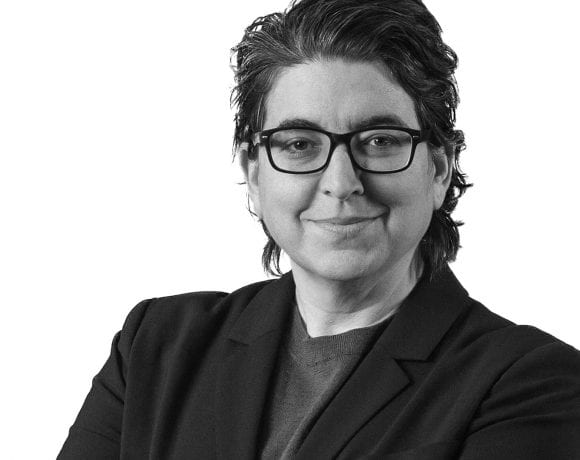 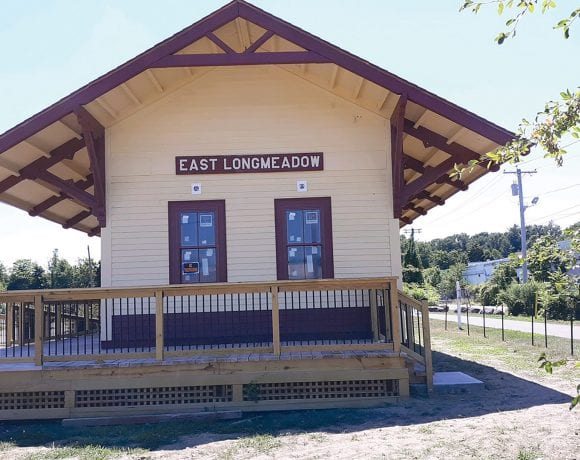