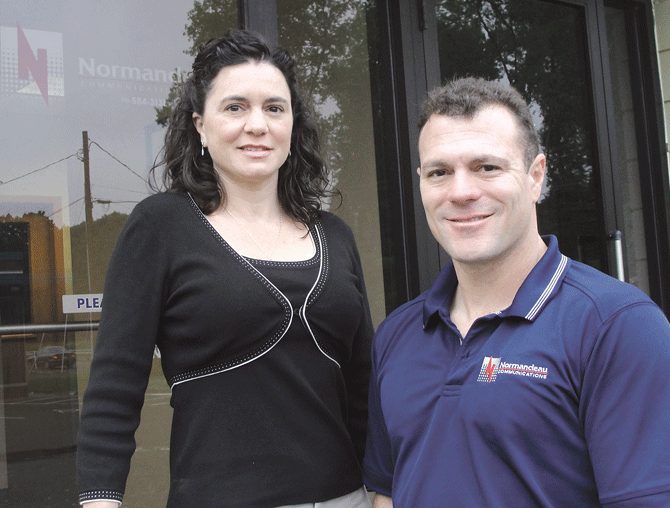 Normandeau Communications Is All About Making Connections 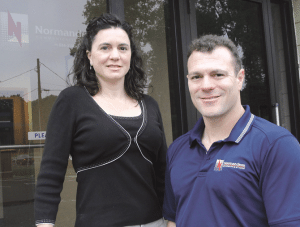 Kim Durand and Brett Normandeau say they strive to match clients with business technologies that, in many cases, they weren’t even aware of.

WestIt wasn’t too long ago that business phone calls had to be made from a desk, and call management meant having a good secretary.
But there’s more than a hint of gee-whiz in Kim Durand’s voice when she describes some of the technology being installed by Normandeau Communications these days. Take the LG-Ericsson iPECS-LIK product, which manages all kinds of communication — phone calls, e-mails, texts, faxes, etc. — across multiple sites, and even on the road.
“The system processes all calls and does the call management for you,” said Durand, director of sales. “Not only can calls be sent to your cell phone, but voice mails left at your office can automatically appear on your smart phone with the .wav file attached, so you can listen to voice mail at any time. Any time people are on the road and not at their desks, like salespeople, it’s really important for them to be able to do the things they need to do.”
Normandeau has been selling, installing, and servicing telephone systems for 22 years, but voice over Internet protocol (VoIP) technology — which uses the Internet to exchange various forms of communication that have traditionally been carried over land lines — has added elements of convenience unheard of in those early days.
The company’s primary product line, Estech Systems Inc., gives business clients the option of a traditional digital business phone system, an Internet protocol telephony system, or a mix of the two.
But Normandeau is also touting a new patnership with LG-Ericsson, whose iPECS-LIK product further streamlines communication within any size business, from small offices to multi-site corporations with thousands of users, allowing calls to be forwarded between sites and even, as Durand mentioned, to mobile phones.
“We’re also providing surveillance systems as well as loudspeaker paging systems,” said Brett Normandeau, the company’s president and Durand’s brother. “All that ties in very well to your telephone system or your whole communication system. With Web access, I can log in and check the surveillance cameras, tie into the phone system, check e-mails” — all from a distance.
These are certainly exciting times in communications, and Normandeau has tried to stay ahead of the curve as it grows its presence in the Valley. Its visibility was boosted two years ago by a move from Florence to Riverdale Street in West Springfield.
“For us it’s been a convenient spot because a lot of our customer base is located in the Hampden County area,” Normandeau said, “and having acess to Interstate 91 and the Mass Pike makes it more convenient.”
In this issue, BusinessWest sits down with Normandeau and Durand to talk about how these siblings — and the company their father began — is making new connections every day.

New Menu
“Communications is not just talking anymore,” Normandeau said at one point. “It’s the integration of many different types of technology that allows you to communicate more effectively — be it Web sharing, desktop collaboration, instant messaging.”
“We’re taking these technologies,” Durand quickly added, “and merging them into single platforms that are able to offer comprehensive solutions for the customer.”
At its heart, Normandeau commiunications has been trading in phone systems since Ray Normandeau launched the enterprise in Florence in 1990, using money from an early-retirement package offered by a streamlining AT&T.
As Ray built his business on word of mouth and a few loyal customers, Brett started working alongside his father from the start, having been licensed as an electrical journeyman shortly before Ray launched the company. He took over as president when his father retired about 10 years ago.
At the start, clients were mainly residential, but gradually, the emphasis turned to business customers, which today comprise more than 90% of the client base.
“We’ve been expanding slowly since we started with just me and my father,” Normandeau said. “We’re moving into different avenues now. We just opened up a training room to hold seminars.”
That’s an important development, he and Durand said, because technology is changing so rapidly that employers don’t always understand what’s available to help their teams do their jobs.
“It’s technical training, training people on different technologies being brought to market,” Durand said. “These are business customers and commercial clients that might be looking for training on these technologies and how to apply them to their business. We’re really trying to find the right applications to fit our customer base.”
With the LG-Ericsson product, the focus is on consolidating different modes of communication. “It collects all technology — digital, analog, wi-fi, phones — and integrates them all with one solution,” Durand said. “That’s really important when you have multi-site networks with multiple locations, like bank branches or realtors. A lot of different types of businesses can benefit from this type of technology.”
Take the Three County Fair in Northampton, for example, which is now using the iPECS-LIK system to manage communication among seven buildings and across the grounds, while incorporating staff mobile phones and providing options for exhibitors as well.
“Because it’s an old fairgrounds, they have an antiquated communications infrastructure,” Normandeau said. “But because of the technology, we were able to utilize all that infrastructure and bring it up to IP specifications, so they could link it all together. It allows them to use old analog-type techniques and IP techniques in the same system.”
But the technology links sites much more far-flung than across a fairgrounds.
“We’ve gone from very small home offices to large companies with multiple sites across the country,” Normandeau said. “We’re implementing a system to connect an East Longmeadow office with a San Jose, Calif. office. Two weeks ago, we finished one connecting Hartford to Orlando.”
Such new products have allowed Normandeau to expand its reach from the smaller businesses that were long its bread and butter to bigger clients.
“The larger customers are definitely much more accessible to us now,” Durand said. “We’ve been doing this for so long now that we know what the implications are for each business; even if they don’t understand them, we can help them find what the right solution is, by making use of their existing infrastructure and minimizing the costs to the customer. That’s the thing we’ve excelled the most at — offering cost-effective solutions while still providing the technology to see them into the future.”

Knowledge Is Power
On July 18, Normandeau will host a seminar with a representative from LG-Ericsson to talk about the how its communications technology can benefit businesses, especially those with multiple sites. It’s just one of many such events aimed at educating clients — and potential clients.
“Customers in general are becoming more informed,” Durand said. “They’re looking at different technologies, and they do recognize what was not possible years ago is really feasible now.
“It’s really about educating customers so they know what they’re getting,” she continued. “We want people to know what the differences are. We know it’s a significant investment to update technology and phone systems. As a family business, this level of customer service has been really critical for us.”
Added Normandeau, “telephone systems don’t even have to be hardware-based on a customer’s premises anymore. They can be hosted IP systems. We are improving that solution as well, so customers can have an IP phone, but all system connectivity and features are located off-site.”
That option is especially important at a time when disaster recovery and business continuation are on the minds of Western Mass. businesses more than ever, following a year marked by tornadoes in June, tropical-storm flooding in August, and a freak snowstorm and widespread power outages in October.
“We moved a lot of clients, especially in the downtown Springfield area” following the tornado, he noted.
“As soon as it happened, Brett drove down there to try to reach out to our customers,” Durand added. “So many were impacted, with physical damage to their buildings, and communications were lower on the priority list at the moment.”
Still, she said, “it was a very busy year.” And yet another teaching opportunity — and those are, after all, yet another chance to make connections.