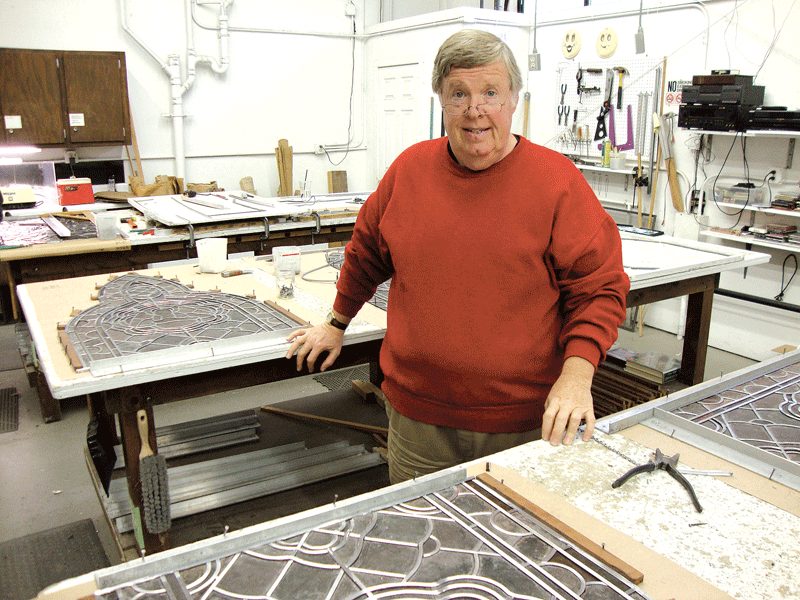 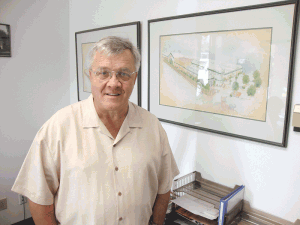 Joe Hickson enjoys working in Hampden alongside his wife and children — and often his grandchildren.

There’s no town water and no sewer systems. Yet, somehow, a business class has emerged in Hampden that echoes the words of one business person in town: “I wouldn’t choose to be anywhere else, really.”
Those are the sentiments of Rich Rediker, creator and owner of Rediker Software. From his large, contemporary clapboard structure he built behind Monson Savings Bank in the center of town, he joked that, to build such a building as his, “not many would make a business decision like this in Hampden.”
“When you get to a certain square footage, you need fire sprinklers,” he explained, “and as there’s no town water, we had to spend an incredible amount of money to bury a tank to keep the water pressurized. To build this building in this town was many times more expensive than anywhere else I could have gone — more than I ever could have imagined, but worth it.”
Pointing out the window to the woods in autumn colors, he added, “look out there at the view — we’re in a beautiful spot. I like it here. It’s home.”
Rediker Software is a pioneering leader in school administrative software, and when Rediker said he wouldn’t imagine putting his business in any other location, he wasn’t the only one in this semirural town of 4,000 of that mind.
Joe Hickson’s Private Garden, recognized across the continent as the resource for greenhouse and agricultural glass buildings that are, in his words, “the crème de la crème,” also makes the conscious decision to stay home, as in hometown.
“We’re not the cheapest, and, in fact, we’re the most expensive,” he said of the glass buildings his company has built to clients’ specifications as far away as Europe. “But if you want something that’s going to stand out and make you money, that’s what you get.” 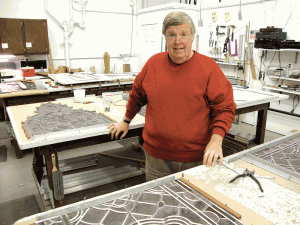 Fred Shea says people who work for him tend to stay with his company for many years.

Just across the road, yet a little closer to heaven, is Stained Glass Resources Inc., owned and operated by Fred Shea. He graduated with a degree in English back in the mid-1970s, but he was unsure about taking a job in the rat race. “I had done stained glass as a hobby previously,” he said. “Rather than work some job that I didn’t enjoy, I’d try my hand at stained-glass repair.” After a short while passing out his business cards to churches and private institutions, it wasn’t long before he established a reputation as one of the region’s leading restorers of this ancient art.
When asked why he chose Hampden as the place for his work and home life, he said it just happened that way. But, as the years passed, the town became the place he wanted to stay. “It’s not crowded, close enough to the city, suburban in some ways, rural in others,” he said. “It’s like being out in the country.” And that, combined with these companies’ reputations in the world beyond, makes doing business in Hampden continue to be the ideal place that they all choose to call home base.

Nobody Does It Better
Shea went on to say that he moved to a few different locations within town before finally settling in the workshop that now contains all operations for complete stained-glass restoration, from the smallest of windows to full cathedrals.
At the height of his business, there was another outpost in the Pittsburgh area and, adjacent to the building in Hampden, a full millworking studio. The economic downturn, however, dimmed those operations. “We were one of the three or four largest studios in the country, right around the time the economy fell,” he said.
Describing some noteworthy jobs that his firm has overseen, Shea described the restoration of a cathedral in Pennsylvania with windows all designed by Tiffany Studios, but also cited several projects in the Pioneer Valley, like all windows at St. Mary’s Parish in Longmeadow, and in Springfield, the Bethesda Evangelical Lutheran church on Island Pond Road and the brownstone Sacred Heart on Chestnut Street, to name but a few.
In the airy space behind his office, the colorful panels from a church nearby await restoration. Shea explained how the cames, the lead support systems, deteriorate over time, along with the waterproofing becoming brittle. From careful dismantling to repair to fabrication of new panels that are indistinguishable from the old, it’s all done in his shop.
Hampden will always be the home base for this operation that has a strong national presence and continues to thrive despite the hard economic reality faced by his clients. “Endowments have been destroyed by this economy,” he said. “Schools, chapels, universities — all completely dried up. You get in touch with your contact people at those places, and they tell you that we have no money to spend on this work.
“Stained-glass windows last around 100 years,” Shea continued, “and sometimes the deterioration can go from moderate to severe in the course of a decade. So people might be postponing it as long as they can; it’s not like plumbing or the roof, or if the organ doesn’t play, then you couldn’t hold services. If the window falls out, it’s still a discretionary purchase.”
He has faith, however, that the current financial climate will eventually improve. “As the economy picks up, I’m sure our business will also,” he said.
“We love what we do here,” he added, “and everyone who works here stays here for a long time — 10, 15, 20-plus years. We provide ourselves on providing the highest quality. There are others, two or three other studios in the country, who also do high-quality work, but there isn’t anyone who’s doing it better.”
Across the street, Hickson’s business has been built on that same business credo.
He and others in the office threw out some client names that would be familiar to readers of Architectural Digest. Private Garden has an exclusive contract with the Bellagio in Las Vegas, and is also responsible for the largest hydroponic tomato grower in the Northeast, with many acres under glass. He displayed some plans for another installation, called GlassPoint, which comprises 500 acres under glass with concave mirrors. “It’s like a magnifying glass,” he explained, “turning water into steam, pumping the steam into the ground, to liquefy solid oil in the Bakersfield oil fields.”
The business that became Private Garden has a backstory that exemplifies how Hickson has earned the reputation his firm has built over the past few decades. As the regional manager for a company that sold greenhouses 28 years ago, he admitted that, at that time, fresh out of a career in the National Park Service, “I knew nothing then about greenhouses.
“In the first six to eight months, we sold $1.5 million in greenhouses,” he continued, “but nothing was happening … we were getting deposits, but no work was being delivered. As it happened, the parent company went into Chapter 11 and told me that they weren’t going to perform. The customers that you sold to, they were done. That went against everything in my grain — I had made a commitment with these people.
“I left the company, and soon thereafter, they went into Chapter 7 bankruptcy,” he went on. “When everything of theirs was liquidated, I sat down with each of my customers, all throughout New England. I went to the auction and bought all of the materials I needed to fulfill all of those obligations. I was just a young kid at the time, 28 years old, with no substantial money, but we did co-checks with the owners, and after all was said and done, we were late with fulfillment, but we performed. And from there we never looked back.”
These days, Hickson’s wife, Kathy, and their children are all part of the family business, and that means his grandchildren are also part of the daily operations. That, he said, is what makes it all worthwhile. He agreed that the economy is tough out there for an industry like his — it is the construction business, and clients have just as much trouble with bank financing — but that staying close to one’s roots makes it all worthwhile at the end of the day.
“Let’s face it, it’s been a tough economy, and in my opinion, it has transformed the way people do business,” he said. “But the grandkids are here four days a week all over my office. How many owners of a business can say they love having the place a mess?”

Setting the Record Straight
Rediker said he has a long commute to work each day — if he rides his bike. “It’s only about 20 minutes, but then much longer on the way home. It’s all uphill.”
That last statement wouldn’t be used to describe his business career or the success enjoyed by his software systems, used in all but one of the 50 states and in 115 countries. And in true entrepreneurial fashion, it all began because he saw a need and invented the means to address it.
“I kid my customers that I was a chemistry teacher back when they were adding carbon to the periodic table of elements,” he said of his backstory. “Sometimes people respond by asking, ‘in the 1980s, you mean?’”
As a teacher in high school, he wrote a program to take attendance. “To make a long story short,” he explained, “it just expanded. I was the class advisor and responsible for kids’ tardy letters. I was keeping track of it with pencil on a daily list every day. I figured out how to do it a lot more efficiently, quickly, and I figured there had to be a market for this.”
There was, and continues to be. He was on his way the next morning to a month of meetings from Bangkok to Portugal, and he said that the company was branching out from primary- and secondary-school administrative software to admissions programs for schools, replacing the pen-and-paper method of the application process.
Of his modern, yet traditional headquarters in town, he told of the many features designed into the building, all specific to the needs of Hampden: a $50,000 natural-gas generator, the aforementioned water system, and the ‘cloud’ of servers on the premises for his worldwide clients.
“I could have built an ugly building here, but together with the bank out closer to the street, we made it look the same,” he explained. “We didn’t have to, but we wanted it to be an attractive corner in town. When you live here, you don’t want to save a few hundred thousand dollars and put up an ugly building.”
Meanwhile, just as important to his hometown is the ability to create much-needed jobs at a time when they are the foundation of every financial-recovery plan. “These are my friends and neighbors here, and if there’s one single thing that this country needs right now, it’s jobs,” he said.
Rediker Software continues to be a business with a strong market share, and is the largest employer in town. The man himself just smiled and said he’s happy to be able to continue to run his business.
“Many businesses like this end up selling out to a larger company,” he said, “and once they do, they’re owned by some giant investment bank; then you have to grow by so many percent every year. To me, if I don’t grow, so what? And yet, we’ve still been profitable for 31 years.” 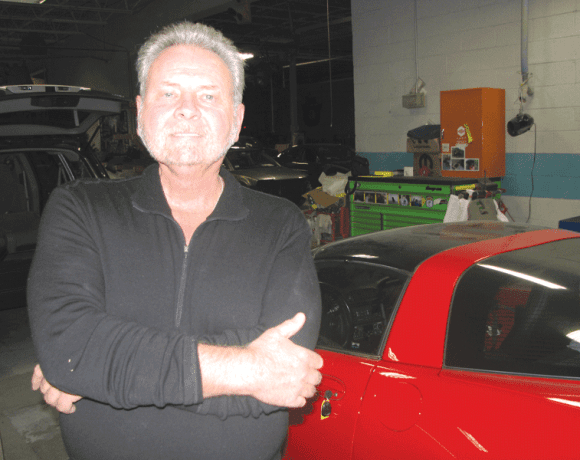 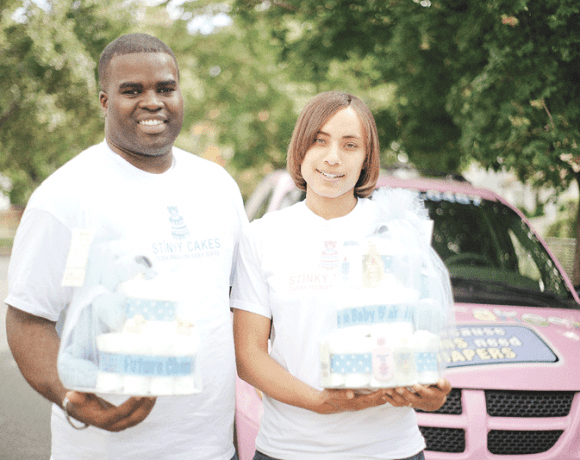