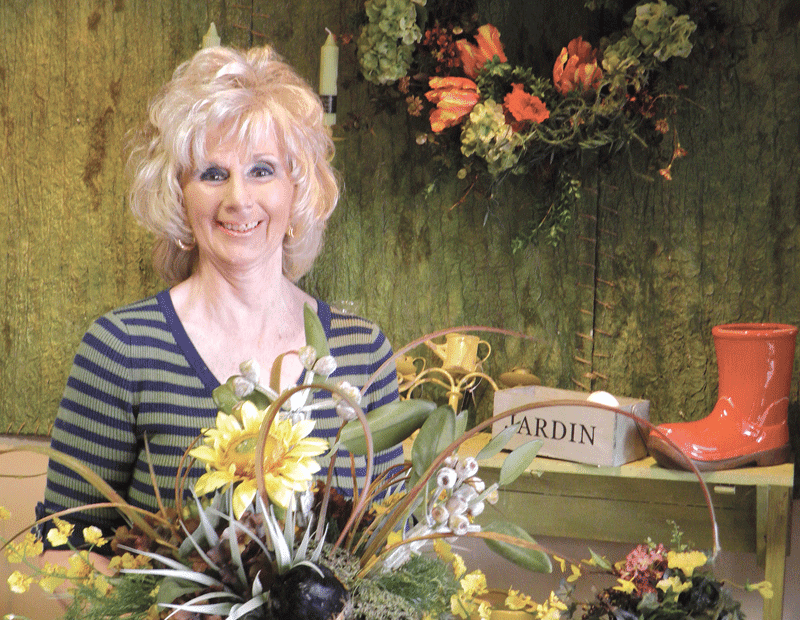 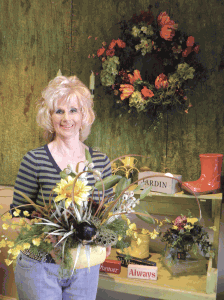 Lois Brooke says moving her store to Longmeadow was too good an opportunity to pass up.

Fifteen years ago, Lois Brooke started a business named Floral Fantasies and erected a building on Memorial Drive in West Springfield to house the fresh and silk flower arrangements and gift items she carries.
Although the shop was doing well, when she heard that florist William Burrows was retiring and the storefront in the Longmeadow Shops that he occupied was available, she moved her business there because she said the opportunity was too good to pass up.
“I thought it was a great walk-in location. It is a nice community, and a lot of my customers come from Longmeadow, Hampden, and Wilbraham, so I figured it would be more convenient for them,” Brooke explained.
Her shop carries a wide variety of unique gift items that range from fanciful figurines to sea-glass jewelry, specialty chocolate, high-end designer purses, and unusual silver and crystal.
“People come to the Longmeadow Shops looking for something different,” she said, adding that some are seeking bridal or shower gifts and want something more unique and memorable than what couples have registered for.
After moving to Longmeadow, Brooke discovered another bonus: a close-knit community of business owners who work together to support one another. During prom season, she puts roses in a nearby clothing store as promgoers rent tuxedos there, and both businesses tell their customers about each other’s offerings.
Brooke has also carried on the tradition started by Burrows of decorating the plaza during the holiday season, and provides free flowers each week to Starbucks and other stores, which brings new customers to her store.
When it comes to the world of business, Longmeadow is small, and its business space is fairly limited. The majority of storefronts are owned by people who specialize in high-end goods at retail shops, or who operate specialty restaurants, most of which are located in a triangle that includes the Longmeadow Shops on Bliss Road, the Big Y plaza, and Williams Place across the street, which rents office space as well.
There are also a number of small retail establishments in a strip along the Enfield line in the Armata’s supermarket plaza area and at two other plazas at the junction of Shaker and Maple roads. Office space also exists in a building at 1200 Converse St., and many doctors and dentists occupy two buildings on Dwight Road.
“Longmeadow is a small community, but that is the benefit of doing business there,” said Sarah Tsitso, executive director of the East of the River Chamber of Commerce, adding that residents like to patronize community businesses. “The town has a little bit of everything, from banks to clothing shops, along with great public schools.”

Small Wonder
Longmeadow boasts a single tax rate, and Tsitso said the Board of Selectmen works continuously with the chamber to ensure that Longmeadow remains a good place to own and operate a business.
The town sits on the Connecticut line and is easily accessible from Route 5, which runs directly through it via Longmeadow Street, where it connects to Interstate 91 North.
“Longmeadow also has a college in its midst, so it draws parents and a large crowd of continuing-education students from all over the region,” Tsitso said, referring to Bay Path College on Longmeadow Street. “In addition, it has two wonderful golf courses with banquet facilities.”
Town Manager Robin Crosby told BusinessWest that the community is well-informed, and has a higher per-capita income than the average earned by residents in Western Mass. as a region.
“The people here can afford services and are willing to pay for them; plus, the town is very pedestrian- and bicycle-friendly,” she said. “The Longmeadow Shops are located right next to the high school and athletic fields, which makes it easy for families to shop there.”
Walter Gunn agrees. “We are a destination spot because the stores here are upscale,” said the Planning Board chairman. “We also have a lot of professional services and small businesses that include engineers, lawyers, and real-estate agents. Longmeadow doesn’t have an industrial park, and there is no zoning for one. Professional and retail is what the town is all about, and the shops and stores cater to an affluent population. The Longmeadow Shops attract people from out of town. They are a destination, and it’s a safe and secure place for people to shop.”
Over the past year, there have been a number of changes with regard to the town’s retail landscape, and several storefronts have vacated, but Crosby said they fill in quickly.
Camile Hannoush, who co-owns Hannoush Jewelers with his family, says they opened their third Gift-ology store in town last fall. The chain now has dozens of stores across Western Mass. and beyond.
Hannoush said the company chose the Longmeadow Shops because it is a great market for the type of product it carries. “We have handmade and very unique gift items such as pillows from different parts of the country, handmade blown glass which is actually wall art, and handmade purses,” he said, naming several exclusive lines. “Gift boutiques have done very well in Longmeadow because of the demographics. There is a demand for that type of product in town, and I feel that customers who go there want something that other stores don’t offer.”
Hannoush told BusinessWest that, although its Springfield store does well, the company doesn’t have to do as much target marketing in Longmeadow because the location attracts clients interested in its merchandise. “It’s not like going to a mall. The shops here are a destination and a retail mecca with a lot of beautiful co-tenants that we felt were a good fit,” he said. “It’s a great area that is convenient and a pretty place for people to go and shop. They feel comfortable there.”
Crosby said that feeling exists throughout the town, and small restaurants also do well. She cites the Iron Chef as an example. It serves Asian cuisine and opened in a small space on Shaker Road in the Armata’s plaza a number of years ago.
Joann Melikian and her brother, Ardy Iennaco, along with other family members, have been working since January to open a second Primo’s Pizza shop on Maple Road in Longmeadow. The family business will sit in a small strip mall across the street from the Iron Chef and next to a Chinese restaurant in the four-corner section of town on the Enfield border.
Primo’s does excellent business in its shop on Worthington Street in Springfield, Melikian said, but has had its eye on Longmeadow for more than seven years.
“We grew up in Longmeadow, and the whole family lives here, with the exception of my sister, who is in the military, and my brother Frank, who lives in East Longmeadow,” she said. “It’s a small community, we know everyone, we can service more towns with takeout in Longmeadow, and there are only a few other pizza shops in town.” She added that the type of pizza they make will be new to the town because it is baked in old-style ovens.

Location, Location, Location
The family has been looking for an appropriate location in town for years, and when Iennaco discovered that the owner of the Maple Street location would allow them to open a pizza business there, he was thrilled. “I’ve wanted to be in this spot for seven years because I knew it will be a home run,” he said. “There is a steady flow of traffic, and there are two schools nearby,” he added, explaining that their operation will offer takeout and meals that will feed three to eight people.
“It is a great economic opportunity,” Melikian agreed. “We’re a family-oriented business and don’t have a big staff. This is small and is exactly what we were looking for. We grew up here and think people need the opportunity to have old-style, homemade pizza.”
There are many business owners in Longmeadow expressing similar sentiments. Indeed, while the products vary — from flowers to jewelry to pizza — everyone seems to be hitting home runs.

Chattanooga Offers a Raft of Lessons for Springfield 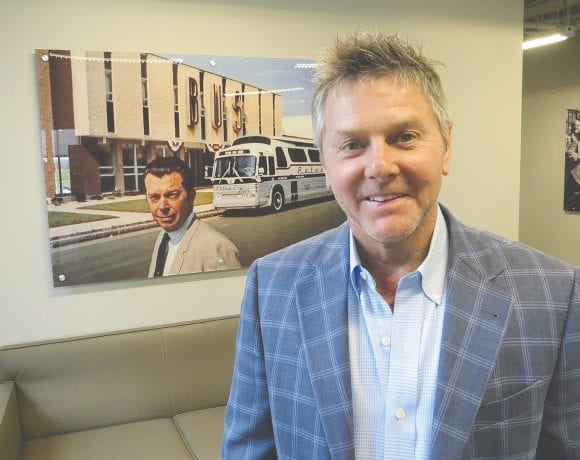