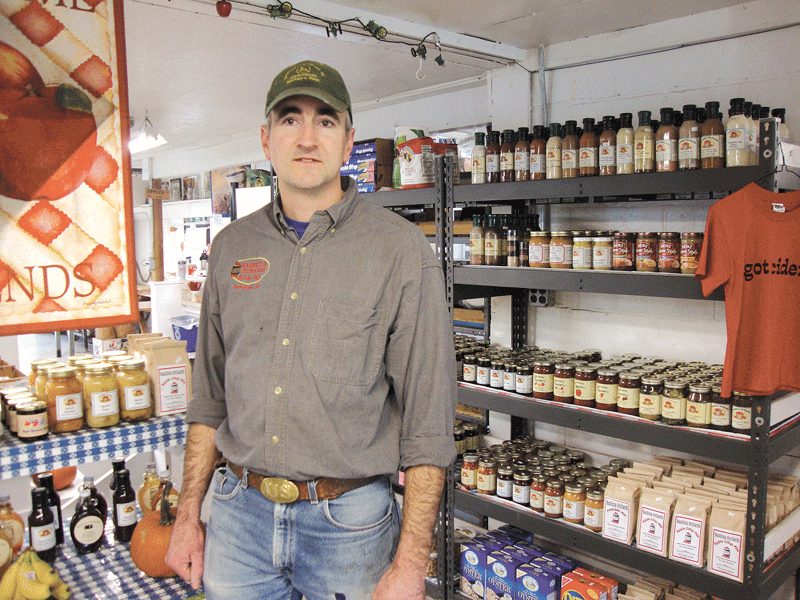 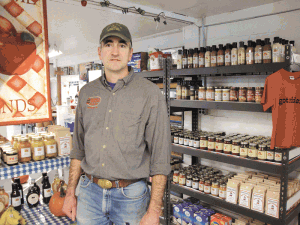 Tom Bashista took over his family’s farm this past January, becoming the fourth generation to work the land.

If you drive into Southampton along Route 10 out of Easthampton, one of the first signs of commerce to greet you is a Big Y superstore.
But a stone’s throw across the road is the sign and entryway for Red Rock Shops, with 1960s-style letters heralding a strip of mom-and-pop stores. And this lets you know that you’re in Southampton. Primarily a residential community with a population of close to 5,800, the town has a business base that in many cases can be traced back for more than a generation.
Town Clerk Eileen Couture is no longer owner of Mahoney’s Package Store, but with her husband, she ran one of those mom-and-pops for more than 25 years. She said that, in addition to her former store, her husband’s family was owner of the popular Couture Gardens dance hall.
Speaking from personal experience, she said, “quite a few businesses in town have grown up with their families.”
While she sold her store to take up a position in Town Hall, she listed off the names of several Southamptonites who are still business owners: Pure Foods, owned by Don Pusa; the Tarka family’s auto-service station; and Lyman Sheet Metal, a machine shop that has been in that family since 1894.
With his wife, Cheryl, Tom Bashista took over his family’s farm this past January, becoming the fourth generation to work the land. At Bashista Orchards and Cider Mill on East Street, he joked that the only thing that’s different now as owner is the amount of paperwork for which he’s responsible.
But a drive through Southampton’s scenic byways offers a window into a business community that also reflects the cultural underpinnings of this colonial town.
Sage Books is a used bookstore that is housed in an elegant antique home along Route 10. Owner Pete Morin said that it was fate that brought him and his wife to this role, and that, despite the Internet, the written word on paper is still a draw for people. Similarly, Robert Floyd, owner of the eponymous photo gallery next door to Town Hall, said that, after a professional career as a photojournalist in New York City, he made the decision to take this property before he even knew what he wanted to do with it.
Since opening in 2001, the Robert Floyd Photo Gallery has been serving both local and world-renowned artists in the medium, while also providing monthly classes and seminars.
For this installment of its Doing Business In series, BusinessWest finds out how Southampton is very similar to Floyd’s description of his gallery: “It’s many things to many people.”

All in the Family
Couture said that her business flourished through the 1970s and ’80s. “But when the bigger stores started opening in West Springfield or Westfield in the ’90s, everyone would go there for their big purchases.”
Given the tightly knit town, though, she said that people are very much interested in supporting the shops owned by their neighbors.
“You want to give the local people a shot,” she said, adding, “Pure Foods has some very solid local business, even with Big Y right across the street. His parking lot is always full. They have a lot of meat specials, and people flock there for that.
“At the bowling alley,” she continued, “I learned how to bowl there; my kids did, too. It’s nice to have things like that for your kids. That place has been owned by the same family forever.”
It’s a long way, commercially speaking, from bowling lanes to apple orchards, but the sentiment is the same for Bashista.
Working the same farmland his great-grandfather Jacob first owned in 1926, Bashista said that he took over as the latest generation because “I didn’t want houses built on this land.
“It’s sweat equity just to keep the land the way it was when I grew up,” he continued, “so my kids can have that same opportunity. What they do with it is up to them, but it’s my choice to do this.”
But it wasn’t a difficult decision to make. Bashista Orchards has maintained a thriving retail component to the farming, from the days when Jacob had a container by the roadside so customers could make their own change, to the current building, housing the apple-sorting facility, cold storage, a bakery, and shelves lined with the best this farm and other local food purveyors have to offer.
Bashista credits his parents for turning the market into a year-round operation four years ago, and he noted that the 40 varieties of apples he grows are kept perfectly in the decades-old cold storage, to be enjoyed through the following summer.
“And none of this is high-tech,” he added. “This sorting machine here was bought in the 1950s, and it still works as well as the day it was bought.”
The stretch of road out front is in contention for repaving, and Bashista said he’ll wait for that outcome to determine how, if at all, he’ll change things in his time at the farm. A covered porch would be nice, he said, to offer some protection for idling with a cup of coffee and gazing at the view — something he’s not too familiar with, in his busy time on the farm.
“But it would be a great spot for folks,” he said, “like Yankee Candle’s great wraparound porch.
“I want to keep this the way it has always been,” he added, “like people could step back in time when they come here. Other than making things more efficient, I don’t want to change a thing.”

Read All About It
When Morin had been ‘downsized’ in the 1990s, he knew that the time had come to make a life change. And looking around at the number of books he and his wife, Susan Shea, had amassed the solution was right there all the time.
“After collecting for 35 years, we had probably 5,000 books,” he said. “We thought, ‘why not open a bookstore?’”
Having a good idea from their travels of what they wanted, the two decided upon the current location, an old house that had been vacant for 20 years. It wasn’t for sale, but they had bought a few properties already from the owner, a Realtor, and their patience paid off. After building out the inside from basement to second floor, all with his own millwork, Morin said that operations began in 1996.
At one time, the operation specialized in locating hard-to-find and out-of-print volumes, but has scaled back on that service out of necessity. “When we first opened, there were maybe 400 to 500 booksellers using Internet searches. Today I’d say there’s 40,000 to 50,000. There are those local customers who will come to us, though, just not in the numbers that once were.”
Reflecting on the future of the written word, Morin backtracked first and called it “as important an invention as fire and the wheel,” and said that his demographic is decidedly the older generations.
“Don’t get me wrong,” he added, “I love my iTouch, I listen to the radio on it, but it doesn’t ever replace my desire to read on paper. Younger people still are interested, but it’s less than it used to be. When my wife and I used to go to the beach, we’d bring a stack of paperbacks. James Michener, Tom Clancy, you know the type. I can’t for the life of me imagine doing that with a Kindle.”
While his market is in an ever-evolving state, like a true bibliophile he added, “after opening up here, I was offered a very lucrative job, and I just didn’t want to take it. This is a labor of love.”

Picture This
Similarly, when asked what brought him to Southampton originally, Floyd smiled and said, “two words: Linda Emerson.”
Indeed, after forging a career first as an engineer and then as a photojournalist, with clients ranging from the Special Olympics to Morgan Stanley, Floyd said that he moved to town to be with his partner, but kept the clients and an apartment in Manhattan for many years.
“Three years after I was in town, we were walking right along the street outside on New Year’s Day,” he remembered. “As we passed by this building I noticed a ‘for rent’ sign. I decided on the spot that I was going to take it. For nine months, I didn’t know exactly what I wanted to do with it.”
A gallery dedicated to his own work wasn’t the goal, he said, but to exhibit the work of others in that medium was. “My heart is in elevating photography for the general public,” he said, “to learn about photography, and to really view it.”
His studio isn’t the place for the “cute bear in the wildflowers” kind of imagery, he said, explaining that there is a potentially profitable market he’s turning away. But the work does draw people from both the region and far beyond, and Floyd has become known as a gallerist with as good an eye for his exhibitions as his photojournalism work.
Currently showcasing the photomontage work of Julius Lester and infrared landscapes by Betsy Feick, among examples of many others, Floyd said “my photographers tell me they sell better here than any of their other venues. I know we offer more than any photo gallery in Western Mass, what with seminars and classes. And there are great galleries out there, to be sure.”
His concluding remarks about his business are emblematic of the town itself. “People who know about us know how strong a collection we are. We make a lot of noise for a little gallery.” 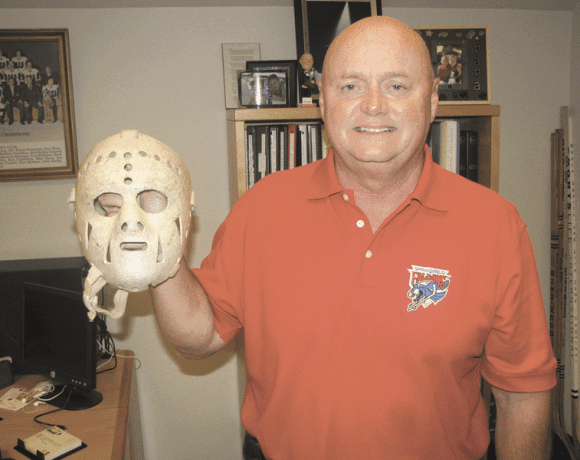