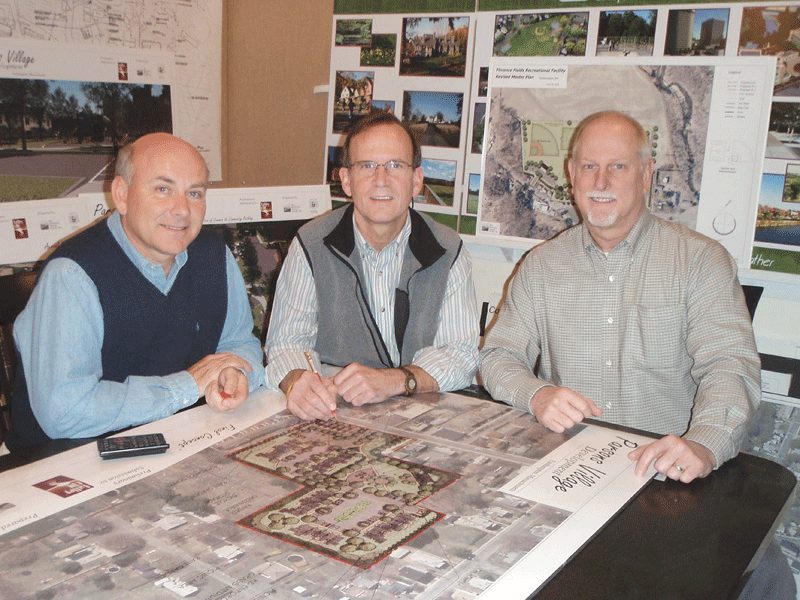 BDG Continues to Grow in a Competitive Landscape 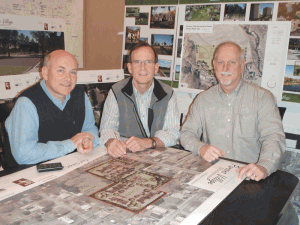 From left, Richard Klein, Peter Wells, and Mark Darnold say doing a feasibility study of a tract of land before a project begins is cost-effective, as it gives developers valuable information about potential problems.

Northampton-based Berkshire Design Group has made its reputation — and grown its portfolio — helping clients navigate the many challenges involved with a building project, from permitting to making the best use of a parcel of land. Said one of its principals, “if a building looks good and is in character with its surroundings, instead of looking like it was forced on the land, it is usually more profitable.”

Many developers have a vision of what they want to build on a piece of property. But bringing that dream to reality, be it residential housing, a school, a park, retail space, or a bank, is a complex undertaking.
It all begins with the land and what it can accommodate. And that’s one of the reasons Berkshire Design Group, or BDG, as it’s known, stands out in a field of competitors. The group, which has an impressive and diverse portfolio of award-winning projects, was founded by landscape architects Peter Wells and Richard Klein. They have done many feasibility studies to insure that tracts are suitable for proposed projects.
It’s a step that some developers skip, which can prove costly in the end.
“We analyze sites to make sure they can accommodate what the developer wants to do on them, and isn’t always possible,” Wells said.
He explained that, if a bank is proposed for a site, the property should be evaluated for zoning and traffic requirements. If the client wants a drive-through, it triggers additional concerns, including where it will exit to the street. There are also requirements that must be met to accommodate the Americans with Disabilities Act. In addition, wetlands and rare species as well as topographical constraints play a role in determining the cost and feasibility of a project.
“Our training is in landscape architecture, and we strive to protect the land while still allowing development to continue,” said Wells. “We work with the topography, not against it. For example, if a site has varied topography, the road that runs along it will be built to blend in with the landscape.”
The firm’s portfolio is filled with a number of diverse projects. “One of the things that makes us different is that we don’t specialize in any one type of development. We have done everything you can imagine, from master planning for schools and campuses to state parks, shopping centers, malls, and all types of housing developments,” said Klein. “It is unusual for a firm to have experience with so many different types of projects.”
Another benefit, which has helped make BDG the largest and most well-known firm of its type in Western Mass., is that it offers one-stop shopping. Its services include landscape architecture, civil engineering, surveying, zoning and permitting, bidding, and overseeing construction. One of the partners handles every project from start to finish.
The firm opened 27 years ago with Wells and Klein, but since then Mark Darnold and Mark Lindhult have joined them, adding to their ability to oversee large projects. And although the principals could have grown the venture by taking on more project managers, thus relinquishing direct control of some projects, Wells and Klein decided to maintain a hands-on approach and have kept that promise.
“It means that our clients get someone with more than 30 years of experience who is a professional and can see things that a younger staff person may not see,” Klein said.

Ground Level
BDG has been feted with a continual stream of awards over the years, including several for the Rocky Hill Cohousing project in Northampton.
“This was a very sustainable and green project with regards to the site development and stormwater management,” said Wells. “Plus, we created a tremendous amount of open space.”
The company’s most recent award came from AIA New York for two dormitories at Amherst College. “The buildings were done using sustainable practices with an eye toward the traditional classic architecture that is the hallmark of Amherst College,” said Klein. “The design was aesthetically pleasing and functionally exceptional in every facet of the building; we have always strived to be as green as possible even when green wasn’t in fashion.”
The firm cares deeply about its clients’ success, he continued, because the principals believe it reflects back on them. And that has a lot to do with how each building, as well as the overall property, looks when it is finished.
“We want to build projects that people like, will use, and that meet the goals for sustainability,” Klein said, adding that the company has completed many LEED (Leadership in Energy and Environmental Design) projects. At present, BDG is engaged in a Living Building Challenge as it plans for the construction of an environment classroom at Smith College.
The concept of Living Building Challenges is based on making decisions by addressing environmental, social, and economic problems that can arise, such as habitat loss and the lack of community distinctiveness.
Wells said the principals’ concern for the land goes back to their identity.
“We use sustainable principles in all of our projects,” he explained. “We have evolved over the years, as we started out as landscape architects and added other disciplines. We look at land differently than other professionals, which allows us to guide our clients more holistically and efficiently; if a building looks good and is in character with its surroundings instead of looking like it was forced on the land, it is usually more profitable.”
Decades of experience gives BDG a decided advantage over its competitors. “We can look at and envision opportunities and constraints on a piece of property as well as the permitting hurdles,” Klein explained. “There may be traffic issues, poor soil, or a site may be too steep for various types of development.”
BDG recently conducted a study on a tract of land for a proposed school. “We found it had topographical constraints. It sloped too much to develop any playing fields. If they had used it for that purpose, their budget would have had to increase, and it could have become quite costly,” Klein said, as he sat in the company’s Northampton office in a room covered with mockup boards in all stages of completion. “Because of our depth of knowledge, we are able to inform clients quickly about additional costs during construction.”
Klein said the company’s A-to-Z approach is one of the keys to its success.
“We are able to take a blank piece of land and do a feasibility study on it to see what it can carry in terms of capacity,” he explained. “After that is determined, we do a preliminary design and get all of the permitting approved, then do the construction documents. We bid the project for developers, and we oversee the construction.” BDG can also illustrate a design proposal before ground is broken by employing computer-generated models and animation.

Step by Step
The permitting process is typically complex and takes many months to complete. “We know the regulations. We also have good working relationships with many board members in the surrounding cities and towns in the Commonwealth,” Wells said.
Right now, the company is in the process of developing several of the largest projects in Western Mass., including the $42 million master plan for Three County Fairgrounds in Northampton and the Colvest Group’s $25 million Chicopee Crossing, which is under construction and will include a hotel, retail shops, and restaurants.
Other projects include the new Easthampton High School and two housing developments in that community — an apartment complex with 50 units in an old mill building on Cottage Street, and Parsons Village, a 38-unit affordable-housing development on four and a half acres. Construction on the village is expected to begin in 2012.
BDG also conducted all of the site work and design for the housing at the former Northampton State Hospital, which includes townhouses, single-family, and multi-family rental units. In addition, BDG is on the team working to redevelop the Indian Motorcyle Apartments at Mason Square in Springfield.
“And we are in the permitting process for Northampton’s newest park, which will be built on 30 acres in Florence,” said Wells. Recent work also includes completion of the new $40 million pharmacy building at Western New England College.
Their company’s client list contains a substantial number of repeat customers who like the fact that they don’t have to hire a number of consultants to get the job done.
“Our process is cost-effective and streamlined so there is less chance of scheduling conflicts or mistakes,” Wells explained. “For instance, a developer could go to four firms who would have to coordinate to complete a project. But we can do it all under one roof. And because we are in Western Mass., our focus is here in the Pioneer Valley.
“We know the area, know the local contractors, and know the local bidding processes, as we do a lot of it and have strong relationships with general contractors,” he continued, adding that he and Klein visit their sites often, which insures that things move along smoothly.
Their expertise and reputation has allowed them to develop a broad customer base which reaches to distant shores, including Taiwan, Puerto Rico, New York, Los Angeles, and Atlantic City.
But their real focus is the Pioneer Valley, where they approach projects in a way that shows respect for the environment. And that respect for the land bodes well for the future — both for BDG and for its clients.