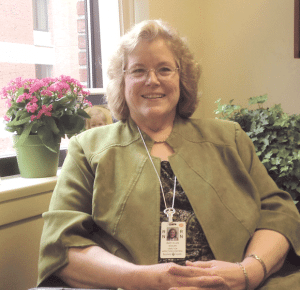 It’s been five years since H1N1 put a major scare into the medical community. The virus, a combination of influenza virus genes never previously identified in either animals or people, appeared in the spring of 2009, spread across the globe, and caused hundreds of deaths in the U.S. alone.

By the time an effective vaccine was developed and distributed in the fall, however, the H1N1 threat had begun to ease up. “It was a flu that went through the entire summer and into the fall, when the traditional flu season was supposed to be starting, and then it started to tail off and disappear,” said Carol Wojnarowski, an RN and infection-control manager at Holyoke Medical Center. “It was a very unique situation. That’s how pandemics get labeled — it’s out of season, it’s worldwide, it usually moves rapidly, and it can be a significant disease for those who can’t fend it off.”

Wojnarowski and her staff — and infection-control personnel at all area hospitals — are among the community’s front-line defenses against such threats, along with local and state public-health officials. When threats emerge, their concerns range from making sure enough masks are available to protect people against airborne transmission to working with pharmacies to rotate antibiotics, to preserve their efficacy.

“We’re always working with other departments, from microbiology to central supply sterilization,” Wojnarowski added. “All these have to be moving together. One won’t work on its own.”

Not every infectious disease is communicable among people, she was quick to note. “You can get tetanus from a dirty nail or a rusty fence, but I can’t give you tetanus. But smallpox, chicken pox, measles, flu, I can give those to you and the person next to you. We have strategies in case we have a pandemic in the community and our vaccines aren’t suppressing it, so we can keep it under control.”

Mary Ellen Scales, an RN and chief infection-control officer for Baystate Health, said outbreaks of flu or a norovirus in the community will often be reported by the Department of Public Health, while, in other cases, a surprising number of patients with similar symptoms will show up in the emergency room, triggering an alert.

Indeed, infection prevention is serious business for hospitals. According to the Centers for Disease Control and Prevention (CDC), hospital-acquired infections are the fourth-leading cause of death in the U.S., and are responsible for tens of billions of dollars annually in healthcare costs.

“We have a responsibility to make sure patients, staff, visitors, and community members who come to Cooley Dickinson Hospital or its satellites are protected from transmittable infectious diseases,” said Linda Riley, an RN and manager of infection prevention at CDH. “We look for certain diseases in the hospital, and infections related to devices people use — IVs, catheters, tubes in the lungs that help them breathe. We look for infections in people having certain procedures and surgeries.

“We work as a team to keep our whole community safe where there’s a community exposure,” she noted. “I would alert our medical staff members, all our offices, let them know what they should expect, what the symptoms are, what they should do if people end up at their offices with measles or flu or something else.”

But where CDH has made major strides, she explained, is reducing the threat of infection inside the hospital.

“We’ve developed improvement plans to reduce the threat of infections,” Riley said. “We do orientation and education for staff, patients, and community members. We implement best practices, and I’m always on the Internet, reading infection-control journals and blogs, looking for new ideas, things we can do to create a safer environment for patients and staff.”

Take, for example, ventilator-associated pneumonia (VAP), which is usually serious and caused by bacteria, which can be resistant to antibiotics. According to the Centers for Disease Control’s National Healthcare Safety Network Report, Cooley Dickinson’s efforts in preventing ventilator-acquired pneumonia place the hospital in the top 10% of the nation’s medical/surgical ICUs.

And that’s a big deal; patients on ventilators have a 32% mortality rate in the short term, but it rises to 46% when pneumonia is introduced.

The culture shift began in 2005 when a team of respiratory therapists, physicians, nurses, quality-improvement staff, and infection-prevention specialists adopted a set of instructions from the Institute for Healthcare Improvement known as the ‘IHI ventilator bundle.’ The bundle offers a series of interventions determined to be the best evidence-based practices related to reducing the risk of VAP to patients. 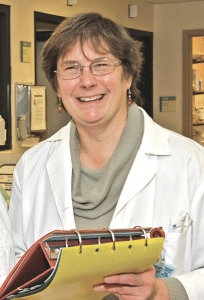 Carol Wojnarowski says infection-control work in hospitals involves a number of departments effectively working together to identify — and minimize — risks.

The staff also scrutinized existing VAP cases to identify patterns and trends. They determined that the most vulnerable patients were those on ventilators for more than 19 days, those with difficult intubations, and those who required transportation within the hospital.

The hospital’s prevention strategy — which works, since it hasn’t had a VAP case in three years — includes making sure patients’ heads are elevated and heating the ventilator tubing to body temperature before use; if they aren’t heated, the gas that passes through them can turn into water vapor, which is a potential breeding ground for contaminants. Doctors at CDH also use closed-suction catheters, which allow them to clean secretions from a patient’s airway while maintaining ventilation, which also cuts down on the risk of infection.

A similar team was assembled at Baystate, which also adopted the IHI ventilator bundle in 2005 and, like CDH, witnessed an almost total elimination of VAP incidents. That followed on the heels of other infection-control measures, like installing alcohol hand rubs throughout its hospitals. “It’s important for healthcare workers to clean their hands,” Scales said.

Cooley Dickinson has taken a high-tech approach to hand hygiene, installing an electronic system, called the DebMed GMS, that monitors whether doctors, nurses, and other care providers are cleaning their hands before seeing patients.

An electronic box at each station keeps a tally of how many provider-patient contacts are preceded — or not — by hand disinfecting. Each department then discusses the findings at staff meetings to develop goals and strategies for improving compliance rates.

Again, this is a serious matter. A study conducted at Duke University Medical Center showed that a 1% increase in hand-hygiene compliance results in annual cost savings of $39,650 for a 200-bed hospital, due to fewer incidents of germ transmission requiring further care and longer stays.

Cooley Dickinson has also taken a cutting-edge approach to cleaner patient rooms using an ultraviolet disinfecting technology known as Xenex Px-UV. The system uses UV light to kill drug-resistant organisms like MRSA, VRE, and Clostridium difficile, or C. diff — which, by itself, infects 165,000 hospitalized patients annually, and about 9,000 of those die, according to the CDC. But at CDH, the presence of C. diff dropped by 82% in just the first four months after the introduction of Xenex.

Wojnarowski said the report of a widespread pathogen in the community is followed by communication with public-health officials and procedures on everything from quarantines to immunizations. Hospital policy also requires care providers to be fully immunized against transmittable diseases.

But she also emphasized the importance of monitoring and preventing infections that develop inside the hospital.

“We invade the patient a lot; we put catheters in their veins, their bladder, their lungs. And those therapies, though they help the patient and provide relief in some ways, are also a pathway for bacteria to get in.”

That’s why Holyoke Medical Center has established guidelines for how long a catheter or IV can stay in, and how to put a medicated dressing around the catheter and insertion site.

“We’re always updating our guidelines, our patient-care practices, always consulting with operating-room people, sterilizing equipment — what can we do better to clean equipment, keep it sterilized? What are the latest strategies out there?” Wojnarowski explained. “It extends to purchasing equipment, too. For example, sometimes it’s cheaper to buy something disposable versus something we have to sterilize.”

Riley agreed. “We’re part of the equipment-management process, and we look for things that make hospital procedures safer.” For example, IVs must be disinfected with alcohol swabs, but CDH has started using alcohol-impregnated caps that keep the port disinfected. “We found this made our IV-related infections go away. We’re always looking for new things that come on the market and new practices to help us prevent infections.”

She said her job is enjoyable, if only because no two days are the same. For example, “environmental sources of infection are a concern when we do construction, so we do risk assessment, decide what protective barriers need to be in place, and do regular inspections. We do water and air testing to make sure they’re clean for the staff.”

Scales said her team gets support from the Mass. Department of Public Health, the Centers for Disease Control and Prevention, and other bodies dedicated to preventing infection both inside and outside a hospital’s walls.

“We also get calls all the time from people in the community, clinics, doctors’ offices, about how to manage certain things. I got a call from a barber who wanted to teach infection control in hairdressing. That’s fascinating. People are more aware of the fact that infections can be passed — and that they can be prevented.”

Those relationships with state and national agencies can be onerous, too, Wojnarowski added, because organizations like the Joint Commission demand rigorous record-keeping. “We’ll have to provide a log book for temperatures in refrigerators, to prove that vaccines are stored at the right temperature,” she said. “A lot of stuff is very tedious, but it’s all about keeping people healthy, because healthcare does have risks. The therapies and treatments people undergo are not risk-free.”

Riley added that her department works closely with infection-control officials in other hospitals to support each other and share strategies that work. “We help each other problem-solve, do educational programs, and e-mail each other when we have questions. I think it’s the most successful example of hospital collaborations and communications. Our relationships are everything — knowing whom to call, when to call, and knowing you trust these people.”

Wojnarowski said they need that network because of how demanding their role is.

“The government says to the hospital, ‘improve this number, get this number to zero,’ which is completely impossible,” she told BusinessWest. “People ask, ‘why is it impossible?’ Well, you have a very elderly population; you have a population that’s on a lot of serious medications that weaken your system.

“Not every patient is a 20- or 30-year-old marathon runner,” she added. “Some are overweight, some of them smoke, and they’re not as healthy as the marathon runner. A risk for me might not be a risk for you. Although there is standardization of procedures, we’re not all the same.”

Riley agrees that zero infections is an impossible goal to meet, but it’s still the goal.

“It shows the commitment of the hospital to do everything we can to make a safe environment for patients. The community really appreciates it,” she said. “The goal is zero infections. But no one is able to do that; it’s not just what we do, but the patient’s own immune system. No hospital has achieved zero, but we’re working as hard as we can, doing everything we possibly can, to create the safest environment for our patients, staff, and visitors.