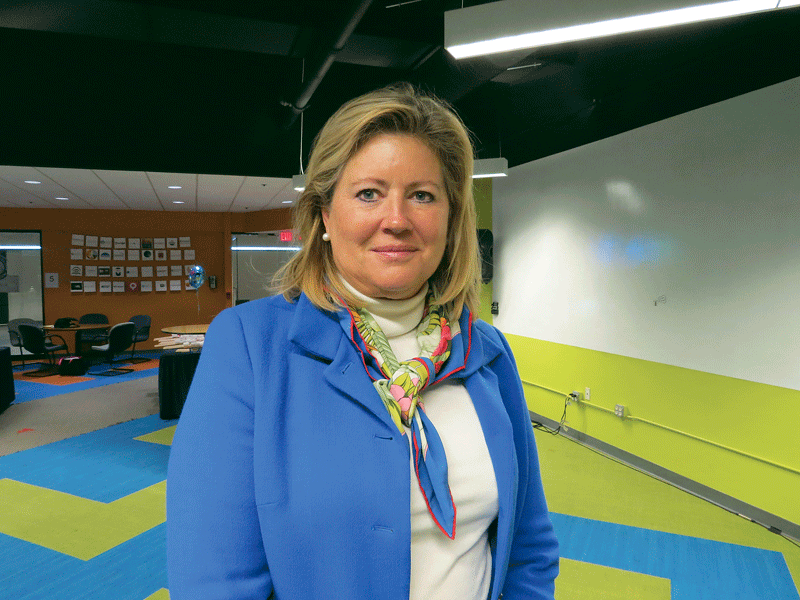 Kate Putnam says the WIT Fund hopes to raise $3 million over the next three years and focus on women-led companies.

Kate Putnam knew something special was going on — right from the first get-together.

That was back about 18 months or so ago, when a dozen women were invited to a breakfast to discuss ideas for making Western Mass. the place for women entrepreneurs and innovators.

“More than 30 showed up,” said Putnam, one of the organizers and chief spokespeople for a group that came to be known, after considerable discussion, as WIT, initially a joint venture of Valley Venture Mentors and the Economic Development Council of Western Mass.

That’s short for Women Innovators & Trailblazers, and also for What It Takes, or Whatever It Takes, said Putnam, a veteran business leader, entrepreneur, and mentor. She said the former describes both the membership and the constituency it will serve, while latter pretty much sums up what it’s ready and willing to do to carry out its mission.

And that is, officially, to “ignite a women-led innovation economy in Western Mass. and beyond.” Beyond that simple statement on the website (witrocks.org), though, the group is committed to helping women succeed in business through funding, mentoring, and more, as in ‘whatever it takes.’

Especially funding. Indeed, the group is creating what will be known as the WIT Fund, an angel-investing fund that will, as that name suggests, focus on women-led companies. The goal is to amass $3 million over the next three years or so, said Putnam, and write the first check perhaps as early as next spring.

She said there is considerable interest among WIT’s members in contributing to the fund, with the suggested contributions being $10,000 to $20,000.

“You can definitely do more,” said Putnam, adding that the group’s tagline will be something along the lines of ‘by and for women,’ which speaks broadly to a two-pronged mission.

“We want to inspire women to become angel investors,” she said, “and also help women who are starting businesses through mentorship.”

Indeed, WIT’s reason for being is perhaps better summed by its stated vision: “to build a community where women boldly define and fulfill their entrepreneurial ambitions,” said Allison Werder, another of the group’s organizers and leaders.

She noted that the ‘fulfilling’ part of the equation is often more difficult for women than it is for men, especially when it comes to statistics related to funding of entrepreneurial ventures, as we’ll see. And WIT was created to essentially do something about that.

“The overarching premise is women investing in women,” she told BusinessWest, adding that, in this case, ‘investing’ comes in many forms, including mentoring and educating women in how to be angel investors.

But perhaps most importantly, it will come through actual angel investing, she said, adding that the need is real — and growing.

Nationwide, women-led companies (a phrase that includes diverse teams of individuals) comprise roughly 28% of the individuals seeking capital nationally, said Putnam. But they receive just 17% of angel funding and only 2.5% of venture-capital funding.

“Even if you can get to the angel round of funding, the VCs aren’t stepping up,” she explained, adding that, while in Massachusetts, and especially Western Mass., the numbers are somewhat better (anecdotally), there is still considerable room for improvement, a reality that was the real inspiration for WIT’s evolving mission and growing membership.

Indeed, those 30 women who turned out for that initial meeting in 2016, and those who have joined since, understand those numbers and what they mean, said Putnam, adding that the membership represents a number of groups involved with women, entrepreneurship, economic development, or a combination of the above.

As for the membership, it has grown to 80 or 90 individuals, and includes the leaders of the many women’s colleges in the area, other educators, business owners and managers, entrepreneurs, creatives, marketers, and individuals working in various aspects of economic development.

“It’s a broad spectrum of people, both those looking for guidance and those looking to grow the entrepreneurial community,” said Werder, adding that they have come together behind a single unifying assignment, if you will.

“We think there is an opportunity to put a stake in the ground that Western Mass. is very friendly to female-led entrepreneurial businesses,” she explained, adding that a number of forces, from the women’s colleges and universities to VVM, have inspired such optimism.

And now there is another in WIT, a group that has a lofty goals and a name — actually, two of them — that says it all.