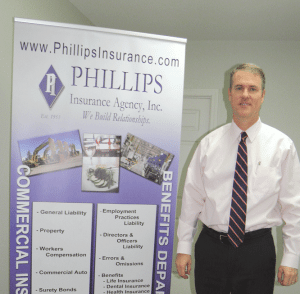 Joseph Phillips says the bonding process, while complex, should be considered an opportunity for businesses, not an obstacle.

Joseph Phillips is drawing a triangle to illustrate how a surety bond works. One leg is upheld by a contractor, and the other is held by a bonding company. The business owner, city, or agency that hired the contractor sits at the top.

Although the concept is not difficult to understand, Phillip says confusion and misperceptions exist about the prequalification process required to post a bond. He admits it takes time and can be frustrating, but contractors who complete it have an edge in an industry that has become increasingly competitive. Bonds allow contractors to work in both public and private sectors and thus weather changes in the economy during an era in which more and more owners and banks require that projects are bonded.

Phillips is passionate about his work, and he and his 18 employees have spent close to two decades educating and helping clients complete the bonding process, which many don’t attempt because they consider it too complex or difficult.

But Phillips says it is a good investment of time. “People should not consider it an obstacle, but an opportunity to expand their business,” he told BusinessWest.

He has been dealing with surety bonds since he graduated from college, and today, due to his efforts, Phillips Insurance has become one of the largest bond and construction insurance writers in the Northeast. “We have the same expertise in surety bonds and risk management for contractors as our competitors in New York and Boston, and can respond to needs whether they are simple or complex,” he said.

Although his agency also writes automobile, home, and business insurance policies and serves 150 clients in 12 states, 80% of its work is with bonds.

Phillips does what it takes to attract and retain clients, and that includes meetings at 5:30 a.m. in a wide variety of places, including airports. “I’ve written bonds for contractors in Las Vegas whom I have never met,” he said. 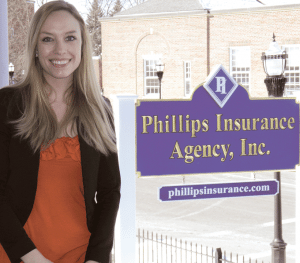 Bond Administrator Jocelyn Keech is one of 20 employees at Phillips Insurance Agency in Chicopee.

He takes great pride and satisfaction in connecting clients with the companies that offer these third-party guarantees. What sets the company apart from the 38,000 other insurance agencies in the U.S. is that it is a member of the National Assoc. of Surety Bond Producers, Phillips said, adding that the organization has fewer than 500 members due to the difficulty of fulfilling its requirements. He is past president of the Surety Assoc. of Massachusetts, and has earned both his AFSB (associate in surety and fidelity bonding) and CRIS (construction risk and insurance specialist) designations.

Phillips advises contractors who are unfamiliar with the bonding process to visit his agency’s website — www.phillipsinsurance.com — and read the publication link titled “Your First Bond,” as well as other educational material posted there.

Phillips Insurance Agency celebrated its 60th anniversary last year by giving $1,000 each to 10 nonprofits that were nominated by their clients, then voted on by the public. Winners included the Boys & Girls Club of Chicopee, the Constanza Medical Mission, the Assoc. for Community Living, the Sisters of St. Joseph, Camphill Village USA, and others. In addition, the agency donated $1 to Shriners Hospital for every ‘like’ it received on its Facebook page.

The company dates back to 1953, when Joseph’s father, Cornelius Phillips, purchased the William J. Fuller Agency in Chicopee. The Fuller Agency had been in business since 1898, and Cornelius renamed it and chose to focus on auto and home insurance.

A major shift occurred when Joseph took the helm after his father’s death in 1997 and put his focus on the surety bond market.

He had worked for Fidelity and Deposit Co., which is the oldest bonding company in the U.S, after graduating from college, then was employed as a bond writer for Liberty Mutual before he returned to Chicopee to join his father in business.

The company has always valued its employees, and when Joseph joined his father, there were only two employees. They included 52-year-old Jeanne Jones, who was employed by Cornelius at age 16 and is still working at the agency.

“We also have three employees who work remotely,” Phillips said, noting that he chose to keep these individuals when they moved from Western Mass. to distant states.

Phillips also places a high value on education, so the agency’s website contains a wealth of information about the bonding process. In fact, he finds great satisfaction in helping people obtain their first bond.

“It’s intimidating for small companies — the process can be confusing, and many people don’t think they can get a bond,” he said, adding that the agency receives a number of referrals from local certified public accountants and commercial lenders. “But if the person goes through the steps and understands what is required, they leave behind a slew of competitors who failed to do what is required to bid on public projects.”

Phillips said surety bonds resemble an extension of a line of credit at a bank, and the practice of issuing them dates back to ancient Egypt. They have been used throughout U.S. history as well. In fact, Franklin Delano Roosevelt was bond manager for Fidelity and Deposit Co. in New York from 1921 to 1928 before he was elected president in 1932. Three years later, passage of the Miller Act in the U.S. made it a legal requirement for a bond to be issued for all federal public works projects that exceed $100,000.

Phillips admits that trying to get a bond for the first time can be a frustrating process for people who don’t understand what is needed. “When a surety company underwrites a new account, they are looking for the three Cs  — capital, capacity, and character — or the moral and ethical nature of an individual or business entity,” he said. He defines ‘capital’ as a measure of the contractor’s ability to do the work, their working capital, and bank support; ‘capacity’ as their ability to perform a job, which includes their experience, people, and equipment; and ‘character’ as the contractor’s moral or ethical nature and reputation.

In order to gather that information, his agency becomes deeply involved with clients. “We learn the history of their company, their financials, their capabilities, and their failures and successes. We become trusted advisors, like certified public accountants or attorneys, and we have a very high retention rate,” he said.

After the agency gathers all it needs from the person or company, employees analyze and review the material. When that is complete, Phillips determines which bonding company will best serve the client’s needs. “We have the experience to see that the client is placed with the bonding company that matches up best with their type of construction, size, program, and financial position,” he said.

The final step involves submitting a recommendation and the required documents to the chosen bonding company and working out a program for the client. Phillips has access to most of the top 25 surety companies in the country and also offers complimentary products such as builders’ risk, railroad protective coverage, pollution liability, and more.

Projects for which Phillips Insurance recently executed bonds include:

Phillips has also written bonds for clients on projects nationwide. They include various clients at the $10 billion Global Foundries project in Malta, N.Y., as well the granite contractor at the Cosmopolitan in Las Vegas.

“We’ve bonded projects from $100,000 to $50 million, and have written bonds for subdivisions, landfills, and solar projects,” he said.

And new work is expected after a license to build a casino in Western Mass is issued, as widely expected. “We’re excited about it. It will be a $500 million-plus project, and if the owner decides to protect the project by bonding the contractors working on it, we will benefit,” said Phillips. “We’ve also seen a lot of activity in solar-field construction, which we expect to be a big part of our bond writing over the next three years.”

The Phillips agency’s business in surety bond premiums increased by 30% last year from the year before, and it continues to acquire new accounts.

Phillips wants to expand across the nation, and to that end, he is creating a new website — mybonddept.com — to help agencies that lack the expertise to serve clients who need bonds. “We want to split the commission without taking the business away from them.”

He acknowledges that bonding is a rigorous underwriting process and says an annual review is important. “But I tell new clients to hang in there, because once you accomplish this, you have an unlimited ability to work. It opens up so many doors.”