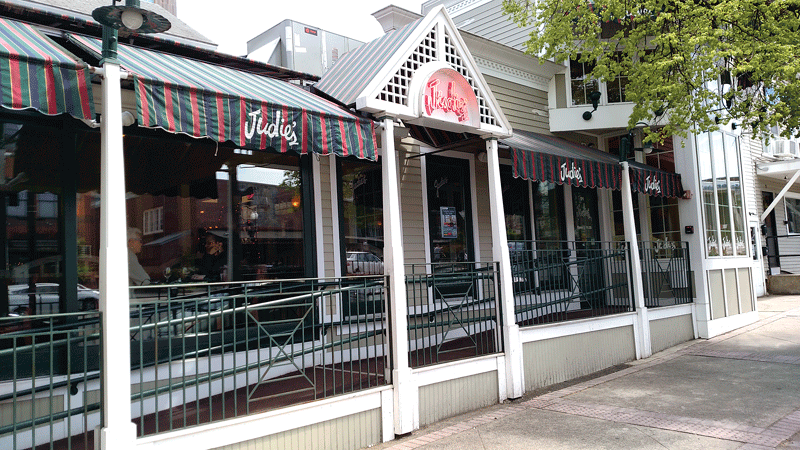 Judie’s has expanded its space multiple times over the years to meet growing demand.

David Williams worked in architecture, not food service, when he was inspired, 40 years ago, to open a restaurant. His inspiration was a young woman named Judie Teraspulsky.

“We had an office in Boston, in Faneuil Hall Marketplace, and one here in Amherst,” he said over lunch one recent afternoon at a brightly sunlit table overlooking the stretch of North Pleasant Street that passes by Judie’s restaurant. “We used to take clients to the Lord Jeffery Inn, where Judie was the baker and a lunch waitperson, and we’d always sit in her section.”

Those lunches became well-known and well-liked by clients. “They would come to my office and say, ‘can we cut this meeting short, and go to the Lord Jeffery and sit in Judie’s section?’”

He had an idea.

“One day, I mentioned to her that I recently designed three restaurants in food courts in shopping centers. I said, ‘we should start a restaurant together.’” She found the possibility appealing.

The location they chose had recently housed a natural-foods restaurant that didn’t last long, so Williams bought the property and all the equipment, procured financing, and brought Teraspulsky on as an equal investor. Judie’s opened in May 1977 — 40 years ago this month — and quickly became, and has remained, one of the Valley’s most celebrated culinary success stories.

He said that particular idea wasn’t hers — she would rather have kept her name off the façade. But he also knew that her reputation at the nearby inn would help bring in patrons in those early days.

The target audience, at first, was professional women, who Williams and Teraspulsky felt were underserved by the town’s culinary choices in the late ’70s. “It was all pizza and hot dogs; there wasn’t a lot of ‘adult food’ in town,” he said. “She targeted women realtors, attorneys, insurance agents — and it took off like a shot.” 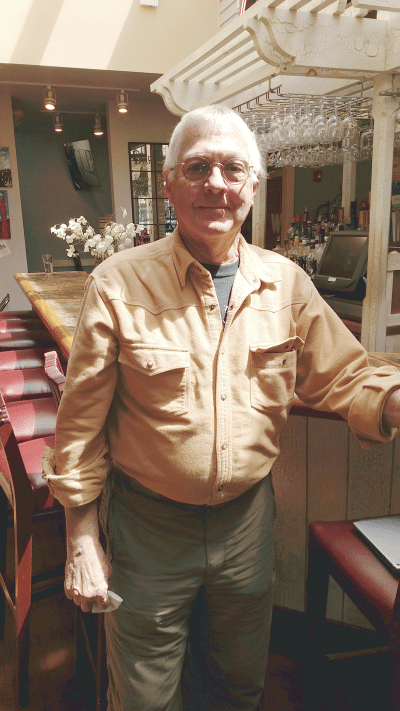 David Williams says he and Judie Teraspulsky saw a need for more eclectic fare in downtown Amherst in the late ’70s.

The idea was that women were more open to experimental food — “and they tip better,” Williams said with a laugh — and, indeed, Teraspulsky’s eclectic menu, rife with fresh ingredients and interesting combinations, proved an immediate hit.

Even with that early success, what the restaurant needed, they felt, was a signature item. They certainly found one.

The fateful inspiration was the Proud Popover, a Boston-based restaurant and tavern affiliated with the Magic Pan. After trying that eatery’s namesake starch, Teraspulsky wanted to create something similar in Amherst — but bigger, and more impressive, than the smaller version she enjoyed.

“She came back here and experimented and managed to come up with the Judie’s popover, and it’s been the staple ever since. Nobody else went that big,” Williams said, adding that they’ve never made public how they’re baked. “There’s a very special way you make them in terms of heat and periods of time. It’s a closely guarded secret.”

A popover slathered with apple butter may be the Judie’s classic, but over the years, she’s turned them into sandwiches, incorporated them in stews and salads, filled them with everything from basil pesto chicken to a spicy gumbo, and even used leftover batter to make popover crepes. The Souper, a soup served alongside a popover and salad, has long been a best-selling item.

“I wanted people to have a ‘wow’ experience,” Teraspulsky told BusinessWest several years ago, “so when we put the trays down, the first thing out of their mouth is ‘wow.’”

The popover isn’t the only well-regarded Judie’s original, though. Williams said she’s been ladling out her popular seafood bisque since day one, among other early creations. And her variety of meal-size Caesar salads are another mainstay.

The experimentation that has made Judie’s menu a hit — and with a much wider audience than professional women — reflects a wave of culinary inspiration that has settled across downtown Amherst in the ensuing decades. Visitors can still get pizza or a hot dog, but Judie’s and the Lord Jeffery Inn are now joined by institutions like Johnny’s, Chez Albert, and Oriental Flavor. Of the latter, Williams noted, “a good friend of mine from Taiwan said that’s the best Chinese food you can eat outside of China.”

He doesn’t think it odd to talk up these offerings while simultaneously competing with them for business, noting that the restaurant scene is part of a downtown renaissance that benefits everyone.

“I’m never scared of competition,” he told BusinessWest. “It means there’s going to be more people coming here, and we’ll always get our percentage because we have a unique menu. Judie has crafted a unique destination in terms of the menu, and, having been a waitperson, she is crazy about the service — it’s got to be perfect.”

Art of the Meal

The years have seen plenty of changes and innovations at Judie’s, many of them related to the restaurant’s consistent growth and need for more space. The partners built out the front of the structure early on, and in 2007, they turned an adjoining bar into still more seating, along with an expanded kitchen and new restrooms; the renovation shut the restaurant down for only five days. 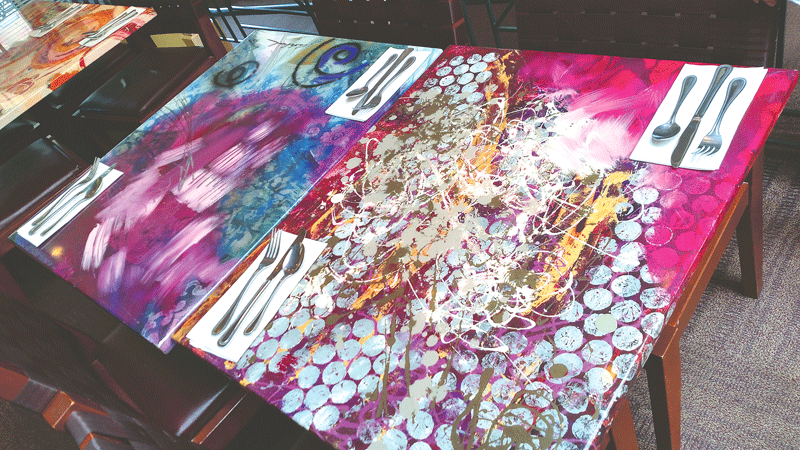 A third partner, Katie Day, took on that role in 2000, after coming to work at Judie’s in the 1980s; her sister was the general manager in the restaurant’s early days, and she learned the business from the ground up.

Judie’s has also become known for its striking, colorful paintings that adorn the walls and tabletops, all created by Florence artist Donna Estabrooks, which has effectively turned the restaurant into a gallery. Patrons are welcome to buy the paintings — and, yes, even tabletops — and Estabrooks changes out the offerings on a regular basis.

“Judie has always been fond of artists,” Williams said, noting that she gave additional vent to this passion a few years ago by opening Judie’s Art Bar, an art classroom tucked behind the restaurant where people come and learn how to unlock their own muse — and leave with their own painted creations.

One might assume a restaurant with a four-decade arc would have passed its peak days, but Williams said business continues to increase an average of 4% every year.

“Of course, the area keeps growing,” he was quick to add, pointing out the window at the main artery through downtown Amherst. “Look at this traffic. In 1970, you could lie down in the middle of the street and never get run over, but now, it’s super busy.”

As Judie’s celebrates its 40th anniversary, Teraspulsky, Williams, and Day continue to welcome patrons eager for a hot, fresh popover or any number of other tempting offerings, in an atmosphere drenched in sunlight and dappled by Estabrooks’ artistic visions.

“When Judie realized she was not the manager, but the owner,” Williams recalled, “she really threw her body, mind, and spirit into this place. She knew what she had here.”