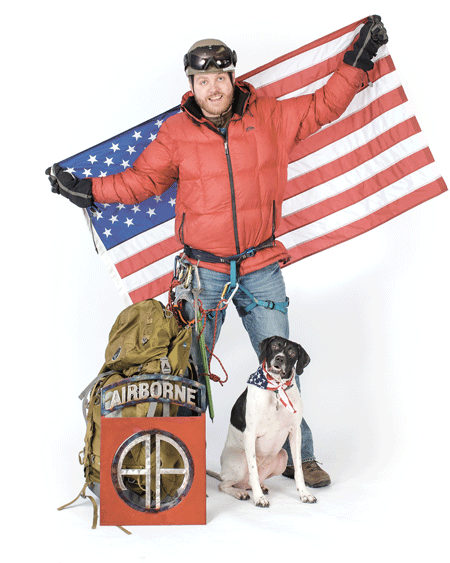 Nick Colgin was asked what he liked about mountain climbing, and especially about leading veterans, many of them disabled, on such expeditions.

He started with some levity — “you can’t get cell-phone reception where we go, and that’s usually a good thing” — but then turned quite serious.

“Having served in Afghanistan as a medic at a young age, you become numb to a lot of things,” said Colgin, who was awarded a Bronze Star for saving the life of a French soldier under fire in that conflict, but obviously saw many people die or suffer horrific injuries.

“Things that used to make me really happy and put a huge smile on my face don’t have the same effect anymore; when you lose a lot of people in your early 20s as patients, it tends to harden you a bit,” he went on. “But when I get individuals who may be blind or disabled and they’ve never climbed a mountain before and I take them up — they’re excited, they’re happy, and I can really feed off that emotion.”

Colgin has had several opportunities to do that in recent months — he just led some ice climbs in North Conway, N.H., for example — but now has some serious competition for the time he spends leading such excursions.

For starters, there’s the business venture he started just last fall, Right at Home of Western Massachusetts, a home-care outfit that has quickly expanded to 22 employees and a number of promising accounts. There’s also a growing number of speaking engagements, like the one at West Pharmaceuticals in Pennsylvania recently, which center on the issue of hiring veterans, and how companies can, and must, become better at that assignment.

Colgin has become a national figure on the subject of hiring veterans — he was put in the spotlight after remarks to Congress about his inability to find work in his chosen field of healthcare after returning home from the war — and has been mentioned by President Obama in several speeches on that matter.

And then, there’s his best friend and companion, an English pointer named Dixie. He finds time for all of the above, because they’re all vitally important to an intriguing life story that’s still being written.