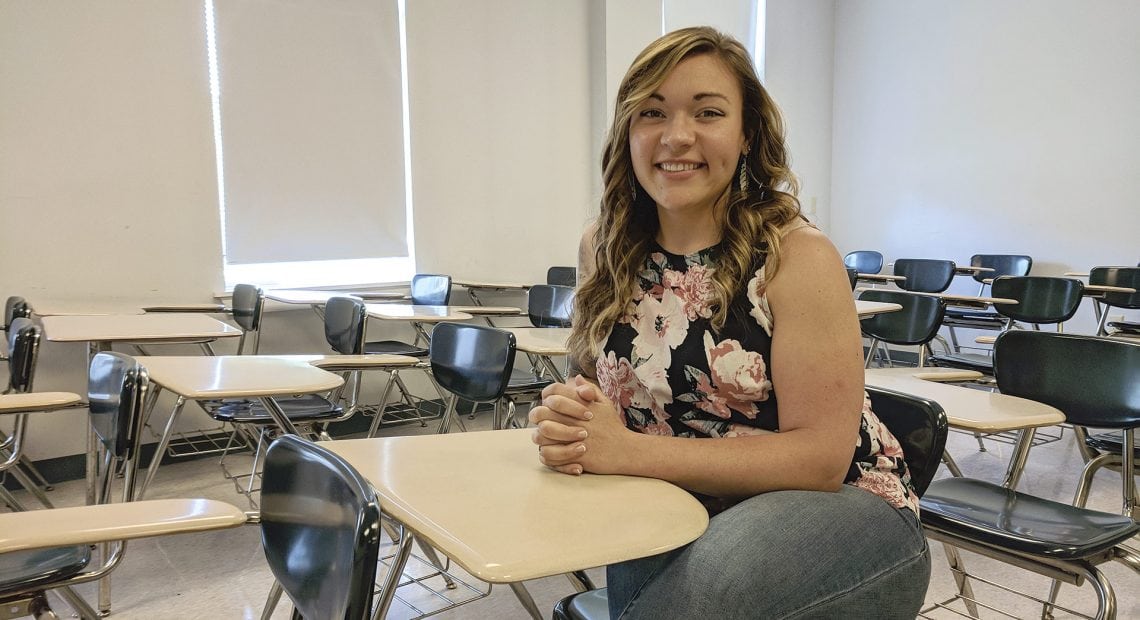 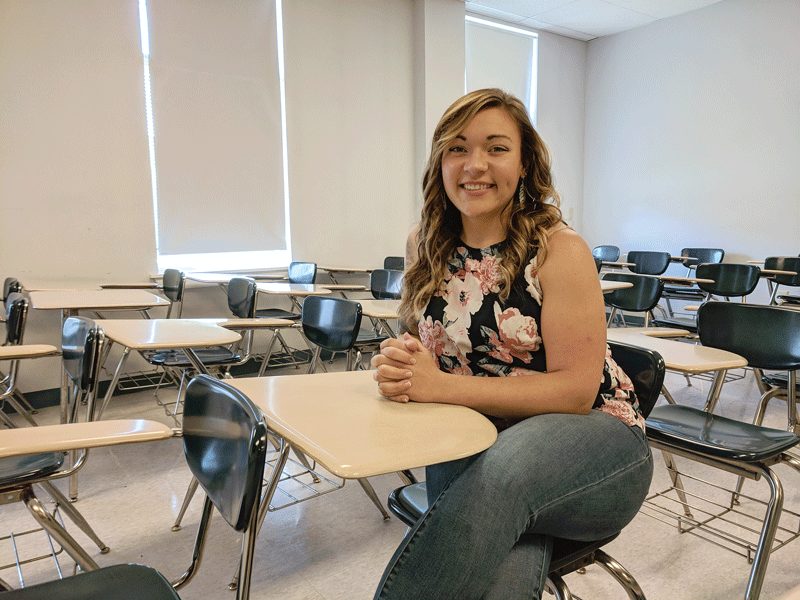 Even her military experience repairing jet engines — work she finds intriguing — hasn’t kept Stephanie Dalton from reaching her goal of becoming a nurse.

Stephanie Dalton has wanted to be a nurse since she was 7, though it took a few intriguing detours to get there.

“I’ve always wanted to do it, and I paid for school myself,” she said of her initial enrollment in American International College six years ago. That entailed working at a series of jobs, from waitressing and babysitting to working at a sandwich shop and a horse farm.

“I was living on my own, just trying to make it, and when I got into the nursing program here, I was so excited,” she recalled. “But I struggled. I was working four jobs, I was trying to keep a roof over my head, food on the table, and trying to pay for my education, and I realized I needed to do something different because I was not going to be successful trying to work and manage school and everything else.”

That’s when Dalton decided to join the Air Force, thinking she could train for something in the medical field, but that didn’t work out. Instead, she became a jet-engine mechanic.

“I work on F-15s over at Barnes, and it’s really fun. I like it a lot,” she said, adding that she’s long had an aptitude for mechanical work. “I knew how to turn a wrench, my dad taught me how to change my own oil, I could change a tire. So I knew the basics. And I’m willing to learn — whatever they could teach me, I was willing to just learn.”

But Dalton — through many twists and turns, as we’ll see later — did find her way back to nursing, graduating last month from AIC with her bachelor’s degree.

Lauren Bennett had no such early sights on nursing; instead, she worked in banking and insurance — including a role in sales at MassMutual — for a decade before becoming a stay-at-home mom. Several years later, when her kids were starting kindergarten and second grade, respectively, she decided to pursue a career again — this time in nursing.

“I knew I didn’t want to sit in an office,” said Bennett, who earned her associate degree in nursing at Greenfield Community College in May. “That was something that I didn’t feel was making enough of an impact. There were definitely things I enjoyed about it, but I wanted a career making a positive difference in people’s lives. And I’ve always been interested in anatomy and physiology and nutrition — different aspects of healthcare.”

With nurses once again in demand across the U.S., the field has become an attractive one not only for recent high-school graduates pursing a college path, but for established professionals in other fields looking for a change. For this issue’s focus on nursing education, BusinessWest sat down with a few such women to find out why they made the switch — and where they intend to take their careers from here.

When Dalton was ready to return to school, she found she was better able to balance her military and academic roles, she explained.

“I was in the National Guard, so I would have drill weekends, go in and do all types of training. Sometimes it was stressful, and I really had to learn how to manage my time, but life was going well for me.”

But the following year, she broke her neck and back horseback riding, and was put into a brace, waist to chin. “I really wanted to come back, but the doctor wouldn’t allow me.”

Still, she was eventually able to return to Barnes, as well as her junior year at AIC. “It was kind of difficult, coming back after being out of the swing of things for a year. I had a lot of struggles, but I had some great supports — a wonderful boyfriend, awesome friends, and my mom, who is my cheerleader. So I struggled, but I made it through.” 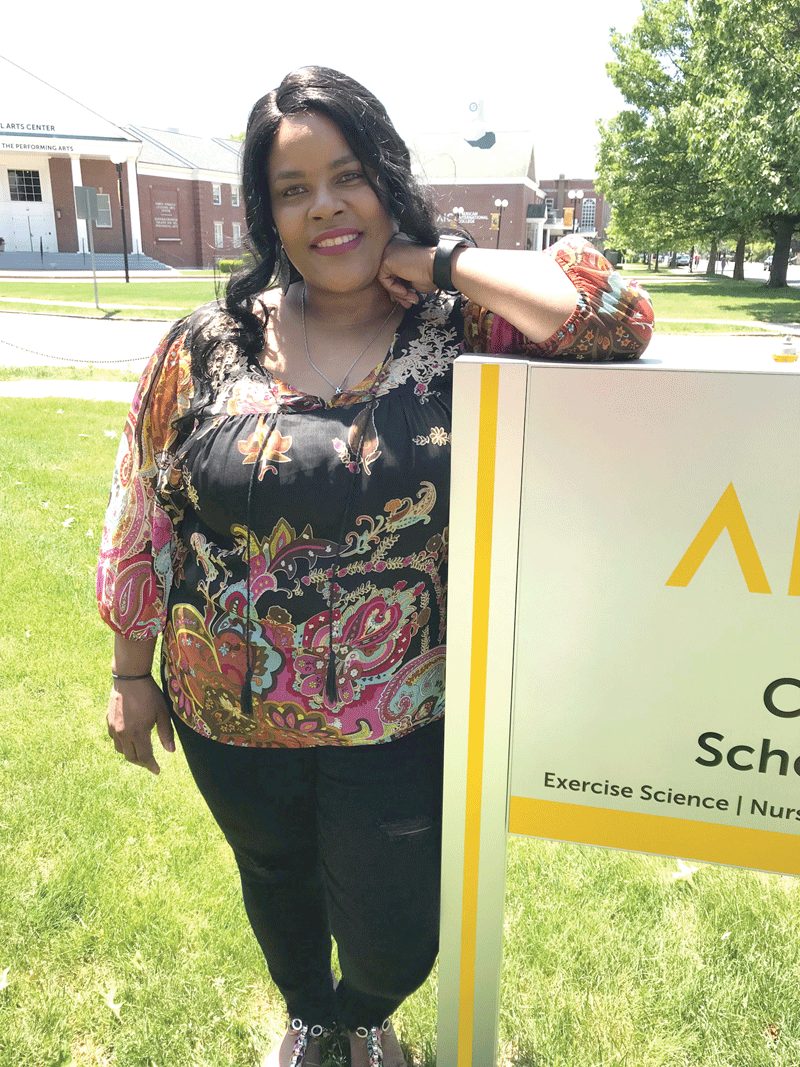 Shamicka Jones wants to make a difference the way medical professionals made a difference for her family during times of medical crisis and tragedy.

That year, a family member with mental illness became very ill, which impacted Dalton’s life greatly, and once again she was feeling stretched thin by her military duties, school, and family challenges. But her senior year was much smoother — not less stressful, necessarily, but she was figuring out how to manage the pressures of achieving the career she wanted.

“I feel like I’ve done a lot in the time I’ve been in school,” she told BusinessWest, in what can only be called an understatement.

Shamicka Jones has been through a lot as well, much of it tragic. A congenital heart condition runs in her family, claiming her two brothers at age 11 and her own young son in 2010. Needless to say, she has been exposed to the medical world and some exceptionally caring professionals within it — and found she had a desire to be one, too.

“I did auto insurance for seven years, but I’ve always had an interest in healthcare because of my family history — we had a lot of medical issues,” she said. “Every time I went to the hospital, I always used to see the nurses, and I thought, I want to do that; I want to help people.”

She tried medical assisting school but found the opportunities in that field lacking. After that, she worked at a group home, serving mentally challenged individuals, work she found fulfilling.

But Jones had her sights set on nursing, and was busy with her nursing-school prerequisite coursework when her son passed away, which threw her for a loop. “I started questioning, what am I going to do? Can I ever move forward from this?”

But she continued to attend school, and two years after that, her mother suffered a serious cardiac event “She dropped down in front of me and my daughter while we were out. I had to give her CPR for 10 minutes before the EMS even arrived. We went to the hospital, and they were able to get her back.”

She had to take a semester off to care for her mother, and began doubting her plans to be a nurse — doubts that returned when her daughter was diagnosed with the same genetic heart condition she and so many other family members have.

“I thought, ‘this is not the path,’ she recalled. “But everyone was like, ‘you need to keep going. You need to do this.’” Her daughter, in fact, was her biggest supporter in her quest to get a nursing degree, which she did last month at AIC.

Jones’ experiences have shaped her career goals, as she is eyeing both cardiac intensive care and psychiatric nursing, helping people with mental-health challenges.

“As a new graduate, I do need to get some experience in so many different areas,” she said. “When I was younger, when I thought of nurses, I thought of hospitals and visiting nurse associations, but nurses are everywhere, in every aspect of society. It’s amazing to me to see all the different options we have.”

Dalton is in the same boat — well, jet, actually — as she considers her options, aiming to find work in a community hospital after taking her boards. She’s looked into being a flight nurse as well, but that plan — which would require copious amounts of specialized training — is on the back burner for now.

When you think of a nurse, the first thing you might think of is somebody in a hospital, at the bedside, but there are so many other possibilities.”

“I always thought I wanted to do some type of pediatric nursing,” she added. “But going through the program, I’ve really broadened my horizons, and now I feel like I want to do everything. Mental illness lies very near and dear to my heart because of my family member, and I see the lack of resources; I see the support that’s not there, the stigma that goes along with it, and I feel like that’s definitely an avenue of interest as well. I’m still interested in pediatrics, and I actually do enjoy working with the older adult population.”

One of her short-term goals is to get involved in community nursing. “In our community course, we actually did blood-pressure and blood-glucose screenings, and that’s something I’m interested in starting up in my town — going to the senior center and starting a little clinic so I can connect with the community and help people.”

Among her long-term goals is meshing her love for horses with her training to launch a therapeutic riding program for special-needs children.

If that sounds like a lot of interests and goals, it is — but it reflects the wide spectrum of roles available to nurses today.

“When you think of a nurse, the first thing you might think of is somebody in a hospital, at the bedside, but there are so many other possibilities,” she said. “That’s the great thing about nursing — you’re not just limited to just one spot, and if you don’t like your job, it doesn’t mean you have to leave nursing. You can maybe do administrative work, or you can do home care. The options are seemingly endless.”

Bennett told BusinessWest she originally wanted to go into labor and delivery. “Now I’ve seen so much more, and I really loved the emergency department, the ICU. I’m pretty open at this point.”

She recognizes that many nurses don’t immediately find the niche they love, and it’s good to keep an open mind, considering all the possible landing spots.

“I know nurses that are stressed by their jobs,” she said, “but I don’t know any nurses who would change careers or say they’d rather do something else. Maybe they’d like a different schedule, but they don’t regret going into nursing.”

Dalton was experiencing some regrets during the toughest times during her long path to a degree.

“The first year back after I had my injury, I was struggling academically, and I had failed two exams, and I just wasn’t doing well,” she recalled. “An instructor sat down with me and asked me if I had a plan B and what else I would do, and I told her I didn’t.

“I’m extremely persistent,” she said with a laugh born of hard-earned wisdom. “No matter what got in my way, this is what I was meant to do. It was important to be a nurse. The things I’ve been through, that accident … I walked away from a broken neck and back, and the doctors told me I shouldn’t be able to walk right now. So I really believe that this is what I’m meant to do.”

Jones has a similar perspective on being in the right career, no matter where it leads.

“I hope I find my place,” she said. “It may not be where I think I’m going to be right now, but I just want to help people the way my family has been helped. We’ve gone through a lot, but always got amazing care. I want to make that kind of impact.” 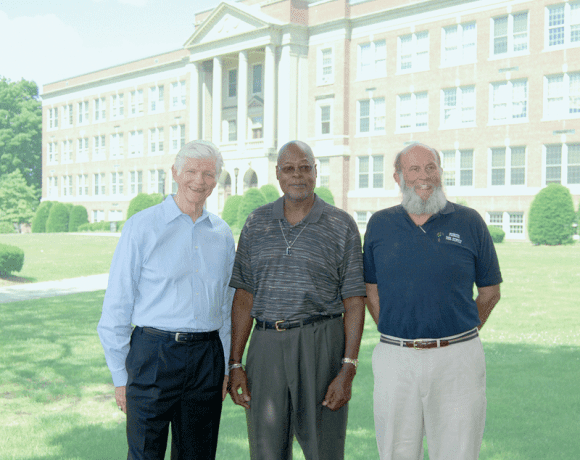 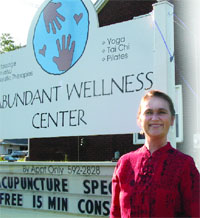