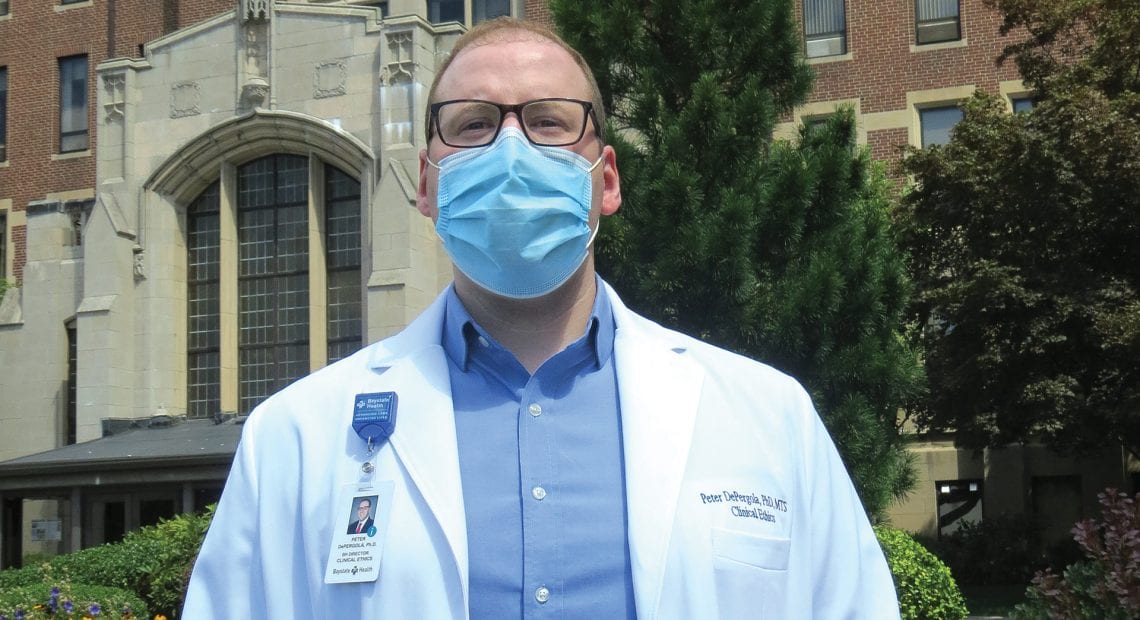 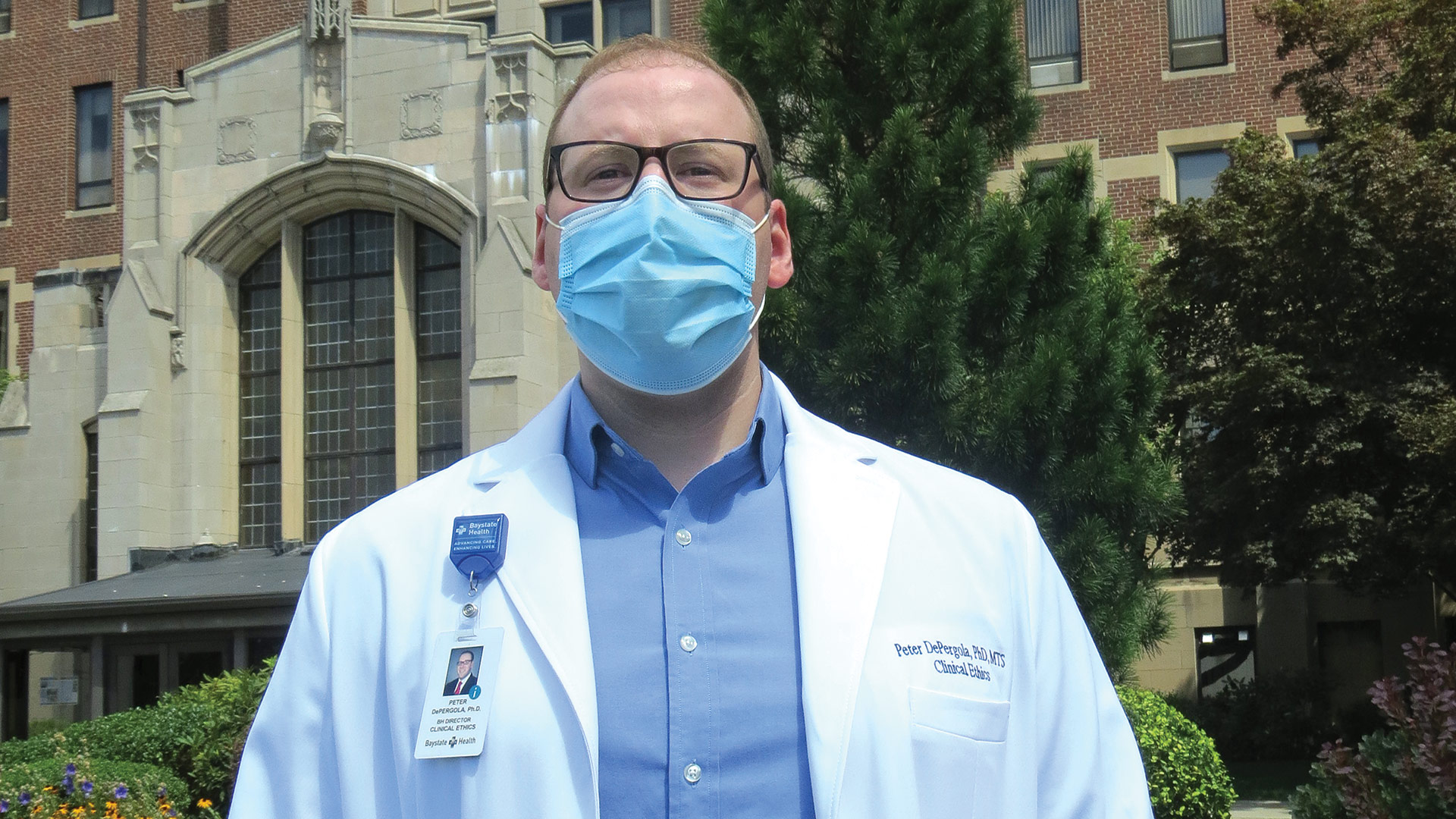 Peter DePergola, wearing his mask outside Baystate Medical Center, a new requirement, has become a national leader in the emerging field of bioethics.

Peter DePergola described it as a “haunting experience.”

He then amended that statement slightly — but poignantly.

“It was incredibly haunting,” he told BusinessWest while retelling his experiences writing a white paper eventually to be titled “Ethical Guidelines for the Treatment of Patients with Suspected or Confirmed Novel Coronavirus Disease (COVID-19),” published in the Online Journal of Health Ethics.

As that title suggests, this is a guide to help medical professionals and healthcare facilities decide who would be treated for the virus and how; specifically, it addresses how limited resources are to be expended and in what circumstances. It was a guide that kept him up nights while he was writing it, and one he truly hoped no one would ever have to use.

But when he wrote it — at the height of the surge that hit the eastern part of the state in April — it seemed likely, if not almost certain, that his own employer, Baystate Health, would be putting it to use.

“I really thought — I truly believed — that we would be using this policy within weeks,” he said, adding that he was working with administrators at Baystate who were preparing to become overwhelmed and would need guidance on, among other things, how to proceed when the number of patients who needed a ventilator exceeded the number of machines available.

It never came to that, and DePergola hopes it never does, but his white paper is there for use if the circumstances arise.

As for why it was so haunting, he said he was writing guidelines, or thresholds, for receiving care that he knew his own loved ones would not meet.

“As I wrote it, I realized that people that I cared about, even my own mother, may not qualify, or meet the criteria, that I have developed in collaboration with my colleagues, to receive a life-sustaining resource,” he said. “It was incredibly difficult to separate my own personal feelings and moral responsibilities to my family from the greater good of the public.”

DePergola’s white paper goes a long way toward explaining why he has become a leading voice in the emerging field of bioethics, not only in this region, but across the state and the nation. And also why he has, for the first time, become a finalist for the Alumni Achievement Award, five years after receiving his 40 Under Forty plaque, and two years after receiving another of BusinessWest’s honors — its coveted Healthcare Heroes award in the category of Emerging Leader.

But there are many other examples, including his steady, if not meteoric, rise within the ranks of experts in the bioethics field.

When he joined the other members of the 40 Under Forty class of 2015 at the Log Cabin, he was a staff ethicist at Baystate and the only person to hold that title in Western Mass. Now a professor of Bioethics and Medical Humanities at Elms College, he’s still the only ethicist in the 413, but his influence now extends well beyond this region.

This was evidenced by his appointment to the Commonwealth’s Crisis Standards of Care (CSC) Advisory Committee in the spring.

The 17-member panel, which in April produced a document titled “Crisis Standards of Care Planning for the COVID-19 Pandemic,” was comprised mostly of noted experts from institutions in the eastern part of the state, including Harvard Medical School, Massachusetts General Hospital, and Boston’s Children’s Hospital. And DePergola was, by his estimate, 20 years younger than any other member.

He remembers a number of heated discussions among the members of the panel, including one that involved whether healthcare providers should receive primary access to scarce resources.

“For a while, I was the minority on that subject, saying that I did think that healthcare providers should get priority because they are the means by which we can care for many more people,” he told BusinessWest. “So even on just utilitarian grounds, which is not the best way to make moral decisions, it just made sense that, if we didn’t take care of the individuals who are, in essence, the tools by which we could heal the general public, then there would be no one else. If we didn’t prioritize them, what incentive would they have to come to work?”

A revised version of the committee’s “Crisis Standards of Care Planning” eventually did stipulate that healthcare workers would get priority, and it included a number of other measures contained in DePergola’s white paper.

The fact that the two documents are now very similar speaks to just how quickly and profoundly DePergola his risen to the status of national, and even global, leader in the field of bioethics.

And also why he is one of the five finalists for the Alumni Achievement Award. 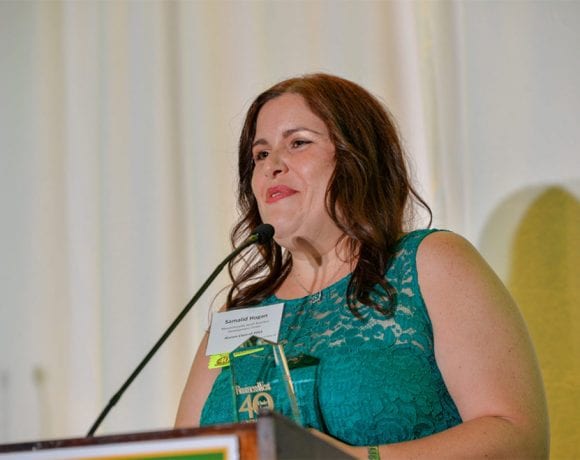 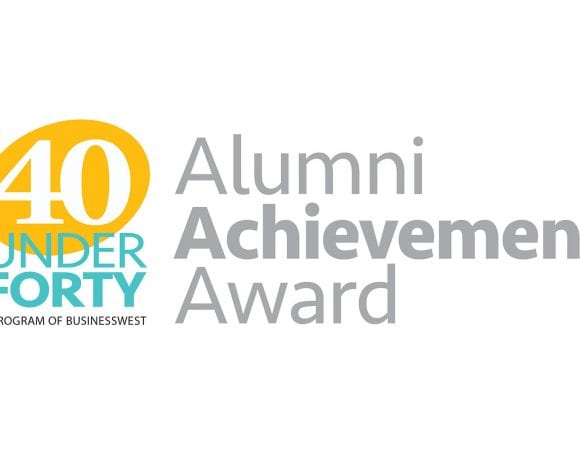 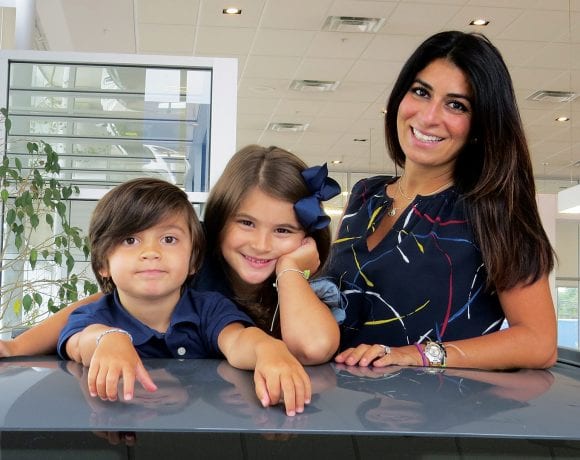