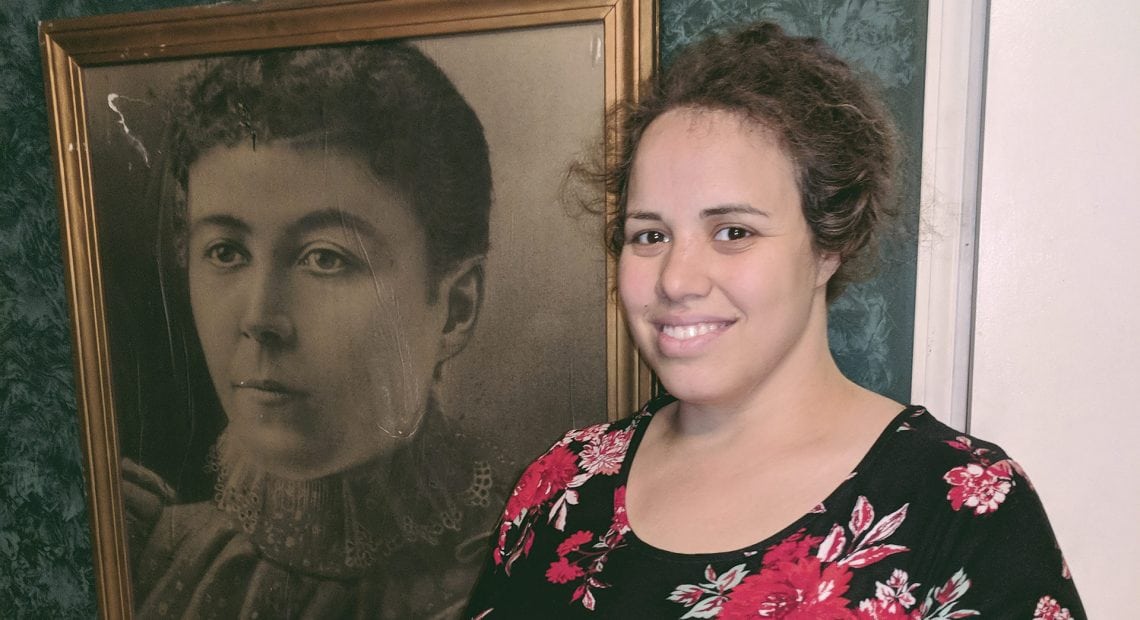 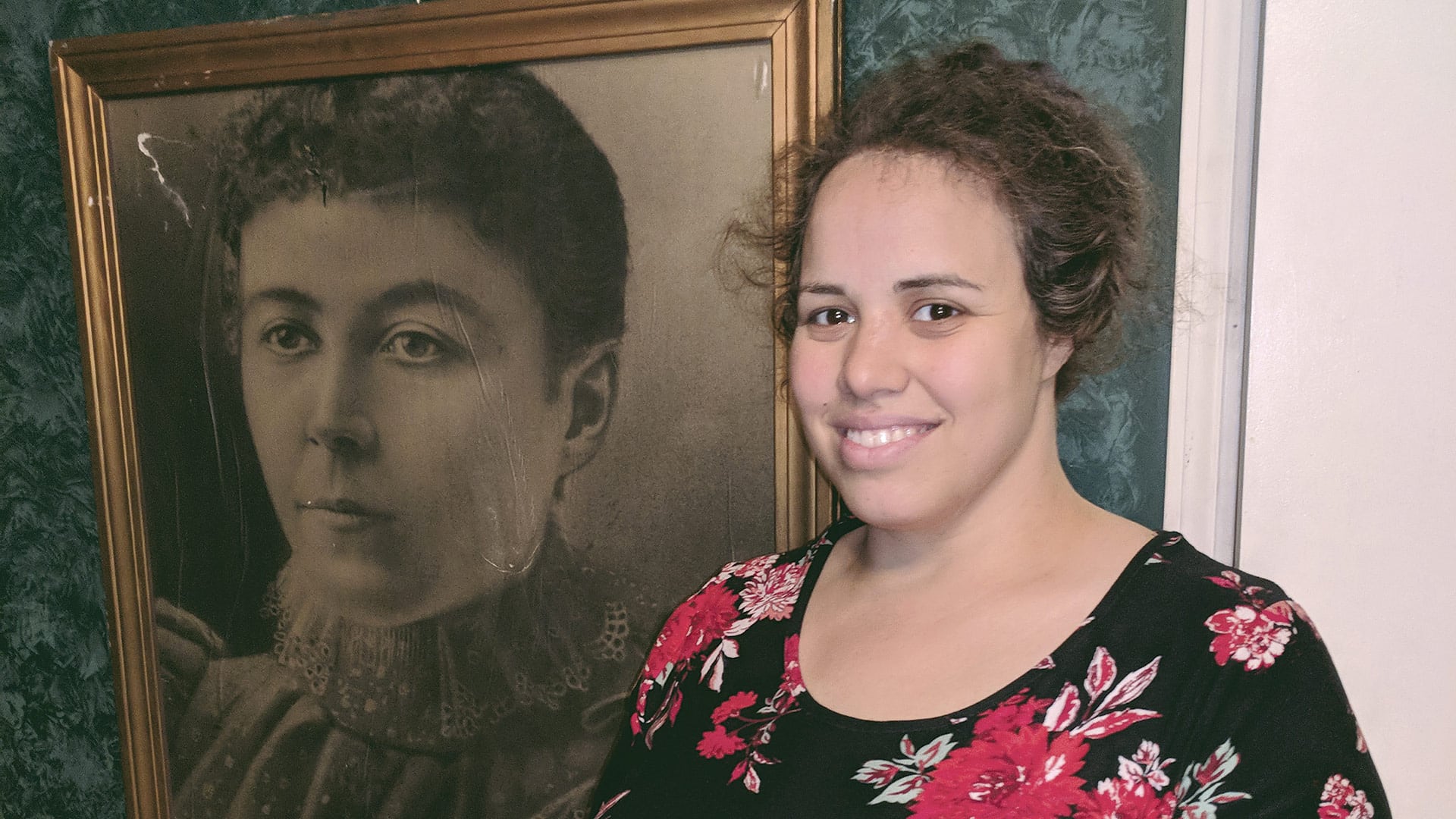 Lise Lawrence, in the study where a professor has disappeared — and visitors must learn why.

Escape Games have been growing in popularity across the U.S., but the Pioneer Valley lacked such an attraction until siblings Lise Lawrence and Tom Dahl opened Puzzled Escape Games at Eastworks in 2016. Since then, they’ve offered several levels of challenge to friends, families, and even companies that take advantage of the activity as a team-building experience. And an experience it is — one that can be as tense and unnerving as it is entertaining.

Picture this: you’re on vacation in Mexico, you visit a tequila distillery, drink too much questionable tequila, pass out, and wake up chained to the wall in a Mexican drug lord’s basement. Now, you have to figure out how to get out in just one hour, before he comes back.

That may sound awful, but plenty of people are happily signing up for the experience — well, minus the tequila.

Indeed, that story is the setup of “Escape from Escobar’s,” one of three escape-room experiences at Puzzled Escape Games, which recently celebrated its two-year anniversary at Eastworks in Easthampton.

Lise Lawrence, who launched and manages the attraction along with her brother, Tom Dahl, recently gave BusinessWest a glimse of what visitors experience on a daily basis, showing how a group of individuals are handcuffed to the wall in a dungeon set, and can’t reach each other — but each has a different perspective on the rest of the room, and they must work together to figure out how to free themselves, first from their shackles and then from the chamber itself.

“You have to communicate,” she said. “People in the front of the cell can see things the people in the back can’t.”

Lawrence, who has a background in film, and Dahl, an actor and screenwriter, established the first escape room in Western Mass. with the goal of building something different than the typical model of ‘find the clues, escape the room’ — even though there’s plenty of that.

“All these places are fun, but what we really pride ourselves on is storylines and set decoration and experience,” she said. “We want to create that real experience, where the only ones who can get you out are you and your team. If you’re alone, you can’t get out of your handcuffs; you need the other people.”

Of course, a game that starts with the claustrophobic tension of a dungeon and handcuffs might not appeal to everyone, which is why Puzzled offers two other experiences: “Find the Professor of the Occult,” and “The Lost Wand,” which appeals to the younger set.

In the former, players enter a large study lined with bookshelves, a desk, and several other items. “The professor’s gone missing, and his housekeeper heard a loud thunder noise, and she went in to investigate, and he was gone,” Lawrence said. “So you’re a paranormal investigator, and you have to figure out what happened to the missing professor.”

In each case, the scenario is introduced by a ‘game master’ who becomes part of the story before leaving the players to their own devices. “That’s another thing that sets us apart from other escape games, where it’s like, ‘OK, go in there and figure it out.’ The moment you walk in the door, you’re aleady engaged with us.”

In its two-plus years of operation, Puzzled Escape Games has engaged a steady flow of participants looking for a different type of activity. For this issue’s focus on sports and leisure, BusinessWest talks to Lawrence about why it’s fun for people to exercise their brains in this way — and why they keep coming back, only to be trapped again.

Anyone who thinks these games are easy can think again, Lawrence said — about 20% of teams manage to escape Escobar’s dungeon within the hour allotted, and about 30% figure out what happened to the professor and make their way out of his study. For the rest, well, answers are given to those who want them, while others choose to come back and try again.

“Surprisingly, people usually aren’t disappointed,” she said. “They’re like, ‘oh man, how far did we get?’ You can come back for half price if you want to play the same room again. Or we show you the rest of the tricks.” 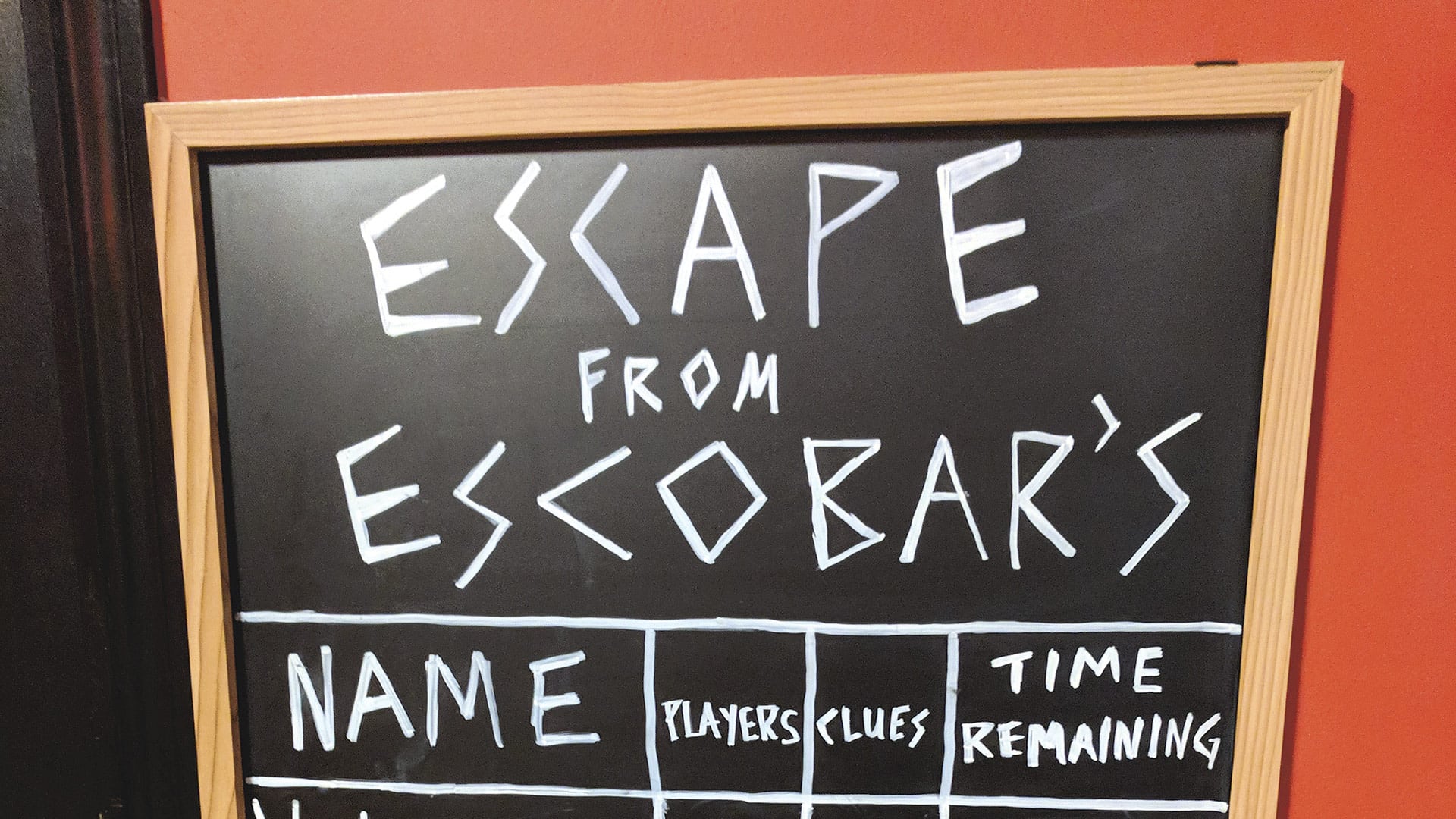 Chalkboards outside each game celebrate the teams who completed the challenge the fastest.

Dahl and a screenwriting friend based in Toronto — he and his wife are also partners at Puzzled — came up with the idea of launching an escape room after visiting several and realizing Western Mass. didn’t have such an attraction.

“They said, ‘we can create an experience without cell phones. We can have people work together and have fun using different parts of their brain,’” Lawrence recalled. “They noticed the biggest thing, when you go to other escape games, is that it’s not heavy on storyline. A lot of times, there’s not a lot of intro. We thought, ‘how could we make it a fully immersive experience?’

“That’s why, when you walk through the door, you’re immediately part of the adventure,” she went on. “The game masters are acting with you. As you’re asking, ‘oh, what does this open?’ and finding clues the puzzle, you’re also learning about what happened to the professor. Why did he disappear in the first place? You’re building the storyline. We have set designers on staff, so we’ve created a theater set, so you feel even more immersed in the experience.”

“The Lost Wand,” which opened in December, caters more to kids with its wizarding-school theme (shades of Harry Potter), but mostly draws adults, just like the other two games. It’s also easier than the other two, with a roughly 80% success rate; when kids play, certain puzzles can be switched out for easier ones, and the pass rate jumps to 100%. A wizard-themed party room adjoining the puzzle room hosts theme birthday parties and other events.

Yet, kids do surprisingly well in the other games as well, Lawrence said, especially “Find the Professor.”

“Funny enough, they do amazing in that room because it’s so academic,” Lawrence said. “I was hosting a group of 12- and 13-year-olds, six of them, and they got out. Kids that age might look for things we might not even think about.”

Still, kids dig “The Lost Wand” for the appeal of sitting in a Potteresque classroom, which sits just beyond a lobby filled with board games, tables, and quirky décor — and that’s part of the experience, too.

“It starts with our lobby. The doors are open, and sometimes people come in just to hang out and play board games,” she explained. “We have our wizarding music playing in the background, we have our fun lights, and this is a great place for people to ramp up and get ready for their game.

“Then,” she added, “the game master comes out and does the intro: ‘this is the Massachusetts Academy of Magic.’ Then the door opens, they enter, and their game experience begins.”

In all three games, teams may ask for up to three clues during the hour when they get stuck. “You agree together you’d like a clue, and you press the doorbell. Monitors are watching through cameras, so we have eyes and ears on you, and we give you the best clue possible.” 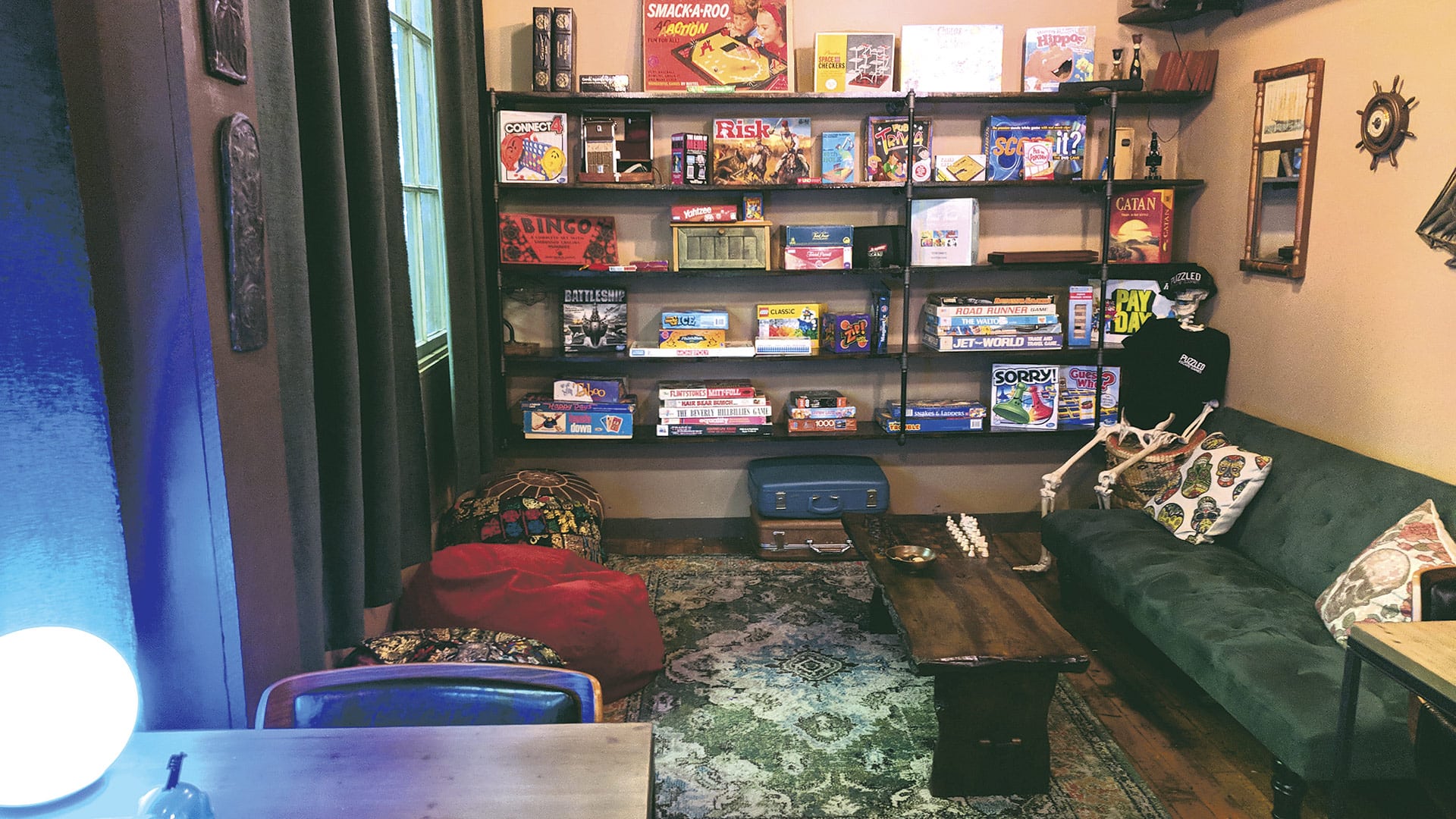 The lobby outside “The Lost Wand” is packed with games to pass the time while waiting for the main event.

Everyone gets one extra tip in “Find the Professor,” however — the hundreds of gold-colored books lining the long wall of shelves aren’t clues at all, and the game master says as much, to avoid having teams waste time on them.

“We tell people these gold books are just set decorations, and you don’t have to look in them or behind them,” Lawrence said. “Some people are like, ‘no, they lied to us.’ But we just don’t want to waste your time. Trust us, focus on other things around the room.”

You’re in the Picture

Lawrence draws on her experience creating film festivals to craft a much more interactive type of experience at Puzzled, while most of the staff have backgrounds in graphic design, painting, set design, and the like. The window in the “Lost Wand” classroom is a colorful, painted dragon’s head, and it’s illuminated at night, so visitors see it from outside Eastworks.

It’s not just families and groups of friends who take part in the games; companies have visited as team-building exercises, which is an especially good use of “Escape from Escobar’s,” with teamwork absolutely necessary to escape those initial handcuffs. “We really push to get groups and companies that want to have a fun activity that also enhances team building and communication. This is a great room for that.”

As for other visitors, they appreciate a different experience from the usual night out, even though not everyone is sold right away.

“A lot of times, there’s one person that’s dragged in, saying, ‘I would never choose to do this on a night out.’ Those are my favorite customers because they soon realize it’s not what they think. I was one of those. It took me two years before I did one because I didn’t want to get locked in a room; I didn’t want to feel stupid.

“But one moment can change all that,” she went on. “If they’re the one that finds the first clue, all of a sudden they’re part of that team. Now they’re the ones that get excited, like ‘wow, I had no idea that was going to happen.’ Most people walk out happy. This isn’t for everybody, but it’s for most.”

Because two of the games require at least four players, sometimes strangers are tossed together, depending on who shows up and when. “Those groups usually have the highest escape rate because there’s different minds in there all working together,” Lawrence said.

It’s fun to make progress on the puzzles, she added, even if the end result isn’t a timely escape — and, hopefully, it’s fun mixed with actual thrills. “In Escobar’s, people start thinking, ‘what if I really went on vacation and this happened?’ It’s freaky. People sweat because it gets intense.”

What she hasn’t sweated is launching a startup with Dahl, even after both had heard it’s not a good idea to be, well, handcuffed to one’s sibling in a business venture. But they’re close and get along well, she said.

“We both went to the performing-arts high school in Hadley, so we’re local, and it’s nice to create something artistic and bring something back to our community,” she told BusinessWest. “That’s literally the basis — how can we provide a fun, immersive experience for people? It’s a lot of work, but it’s rewarding. That’s why we do it.”