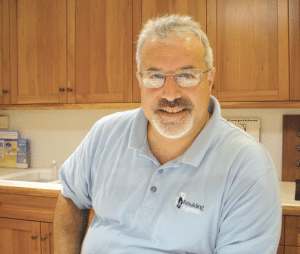 Frank Nataloni says the energy created on Tyler Street and the way the project brought people together was a gratifying benefit.

Frank Nataloni compared the bustling scene to a film set. But what the throngs of people created was far more impactful than a lively matinee.
“It was like a movie,” he said of the day in April when more than 1,000 volunteers descended on Tyler Street, in Springfield’s Old Hill neighborhood, to renovate, repair, and refurbish 25 homes there. The ‘cluster rebuild’ was a project of the Springfield affiliate of Rebuilding Together, a wide-reaching organization that promotes a National Rebuilding Day every spring.
According to Nataloni, owner of Curio Kitchens & Baths in Springfield and president of the local Rebuilding Together board, the organization had long participated in that event by helping dozens of needy homeowners around the city on a single day to repair their homes. But the group had never tackled an entire street at once.
“This was the first time we had tried this,” he told BusinessWest. “The reality was, it went far beyond what we anticipated. And we feel like it’s something we will continue to do.”
Colleen Loveless, executive director of Rebuilding Together Springfield — which restores houses year-round, including 71 in 2012 — said the project was modeled after a similar effort in another part of the Northeast.
“The Philadelphia affiliate did an excellent job the year prior. We’d gone and attended a conference training on cluster rebuilds, and it really made a lot of sense to revitalize a neighborhood,” she explained. “I know we do it house by house, but with a cluster, you can have a sustainable, profound impact on the entire community. And by really focusing on one block, we were able to leverage funding and volunteers, and increase our economies of scale and savings.”
Nataloni agreed. “I think it was probably one of the best ideas we’ve had in quite awhile because it promoted a lot of energy. Before, we’d fix a house, but it was still in an area where the next house could have been twice as bad. When we did one street, all of a sudden, it changed the neighborhood.”
Rebuilding Together Springfield referred to the project as a Green-N-Fit Neighborhood Cluster Rebuild, emphasizing a goal of creating energy-efficient and healthy homes, not just better-looking ones. Major renovations included the conversion from oil heat to natural gas, with street hook-ups as part of an in-kind donation by Columbia Gas and A-Plus HVAC, as well as new and proper insulation of homes and apartments.
About 70 area businesses donated resources to the project, which included new roofs, energy-efficient windows and doors, proper ventilation, mold remediation, pest control, painting, ‘age-in-place’ modifications, electrical and plumbing repairs, smoke and carbon-monoxide detector installation, deadbolt locks, vinyl siding and ramps, and yard cleanup, fencing, landscaping, and planting of shrubs and flowers.
“We focused on healthy and energy-efficient homes, and also reduced the carbon footprint, which helps everyone, not just the people in the neighborhoods,” Loveless said. “We did the full gamut of work, from exterior to interior — repairs, modifications, making things handicapped accessible, age-in-place modifications. We really improved people’s quality of life.”

Before-and-after shots of 171 Tyler St. represent one of the 25 Old Hill homes that benefited from the recent ‘cluster rebuild.’

After deciding to do a cluster rebuild — which was totally funded by private businesses, organizations, and individuals — the question became where.
“We spoke with the city and also MassMutual, our largest sponsor,” Loveless said. “Old Hill is the poorest neighborhood in Springfield; it may be the poorest in Massachusetts. As far as median income, it’s in the bottom 15% nationwide. We were able to reach out to plenty of people; we have a good base of volunteers and a good board of directors who supported this effort financially.”
She noted that several homeowners in the neighborhood had benefited in the past from restoration and rebuilding projects funded by HAPHousing, Springfield Housing Services, and Habitat for Humanity, but plenty of opportunity remained. “People had lived there 35, 40, 45 years, through some hard times, and their neighborhood has seen its struggles. These people were in need. A lot of senior citizens there are on Social Security, and the cost to repair or replace a roof, for example, was really prohibitive, something they could not afford.”
Rebuilding Together has been assisting homeowners since the early 1990s, one at a time, all over the city and throughout the year, but the idea of a one-street cluster revitalization appealed to the organization, said Nataloni, noting that the choice of street was a good one, and not just for its economic demographics.
“In hindsight, it was perfect. It’s a long, level street,” he explained, adding that it was easy to establish a staging area to coordinate volunteers and deliveries. Meanwhile, residents from Tyler and surrounding streets regularly walked down the street to see what was going on, generating palpable energy in the neighborhood. “It was such a good thing. When I think about all the work we did, some of the houses were in tough shape, and we were able to improve them. It’s a modest-income area, and now that’s one concern they don’t have to have.”
Loveless said volunteers were able to close down the whole street to traffic. “That was helpful, because we were able to bring our deliveries up and down the street, dump large piles of mulch and topsoil on the street. Volunteers came up with wheelbarrows and planted shrubs and flowers.”
The neighborhood benefited in other ways as well. Volunteers spruced up a neighborhood playground on nearby Pendleton Avenue and created a community garden for growing fresh fruits and vegetables. They also made improvements to the Old Hill Neighborhood Council office on Eastern Avenue and Quincy Street, and to the Masonic Lodge on Tyler Street. “We put black fencing in and actually gave the neighbors a whole new look right down the street.”
Loveless said about 80% to 85% of the work was completed on that one April day, which was followed by a week of ‘punch-list’ activity in June, featuring volunteers from the New England Lutheran Synod Church, the United Methodist Action Reach-Out Mission by Youth, and Liberty Mutual.
“It was a true community effort — church groups, individuals, community centers, the neighbors themselves,” she told BusinessWest. “So many were involved, along with businesses and organizations throughout Massachusetts and even outside the state. It made such a profound impact, and we were able to get so many resources to people.”

Raising All Boats
Rebuilding Together is no stranger to amassing resources; it enlisted 5,000 volunteers last year in rebuilding 71 homes — in the process earning the Booz Allen Hamilton Management Excellence Award as the top affiliate of the year among some 200 Rebuilding Together chapters nationwide.
“When I first got involved with this, I was looking for something to put some energy into that would make an impact,” Nataloni said. “My business is on Boston Road in Springfield, and I know the needs in the city, so to me, this was a good fit.
“The people that we help, we’re happy to be involved with them,” he added, citing examples like a woman who simply needed to replace her windows to keep her home insulated, but couldn’t because of health and financial issues. Nataloni also finds it gratifying that so many people from the area are willing to lend a hand. “We had kids from the Western New England football team, kids from Springfield College … they’re in the city, and this helps the entire city. It’s a really good feeling.”
He said the cluster rebuild impacted Tyler Street in social ways as well. “There were a lot of residents who never knew who their neighbors were, never talked to them,” he noted. “One gentleman, who hadn’t been on his front porch for five years, actually came out and introduced himself to the others. It went beyond my wildest dreams. I couldn’t have planned that. Even in situations where the house was a rental and the landlord wasn’t participating in the total program, the tenants came out on their own and fixed up their yard. You can’t buy that. That’s the type of impact; it was just exponential, really.”
Rebuilding Together tracks the impact of its work every year, and much of it is fiscal. For instance, the 71 home projects in 2012 — 37 of them damaged by the June 2011 tornado — generated $75,500 in tax revenue for the city when 23 homeowners paid back taxes prior to work being completed on their homes, and another $49,000 in property taxes from 14 homeowners who were able to remain in their homes after repairs were completed.
“All year long, we work on houses throughout the city, depending on what funding comes through,” Loveless said, noting that those funds are typically leveraged so that every dollar spent generates $4 in the local economy.
“Every single month of the year, we’re working on homes, although some months are busier than others,” she said, noting that volunteers are generated through schools, churches, businesses, and old-fashioned word of mouth.
“A lot of people hear about us and say, ‘hey, I’d like to participate,’” she said. “It’s great because we do a full range of volunteer work on homes, so you don’t have to have special skills; you can plant trees, lay down mulch, help paint a house, do cleanups, things like that. Then there’s skilled work like installing kitchens and new roofs.”
Nataloni said the goal was to impact as many homes at once as possible, but the individual stories resonate. For instance, one of the repaired homes is owned by Oscar and Carol Granado, who have lived in their home for 32 years and raised their children there. Oscar is a U.S. Marine Corps veteran who still works full-time at age 72 to provide good health insurance for his wife, who is undergoing treatment for breast cancer. For families like this, home repairs — including efforts to simply make their residences healthier — often fall by the wayside.
“Go down the list: there’s all kinds of issues, big and small, and, again, you’re doing something and seeing an immediate impact,” Nataloni told BusinessWest, again explaining why he values the hands-on nature of Rebuilding Together. “It’s not like, ‘OK, here’s a check,’ and you don’t know where it goes.
“One thing I’ve heard throughout all this is that, in our country, we spend billions of dollars all over the world and do a lot of great things in a lot of great places,” he said. “But the reality is, there are a lot of things that need to be done right here that fall under the current of what people are aware of. That’s why I enjoy being a part of Rebuilding Together.” 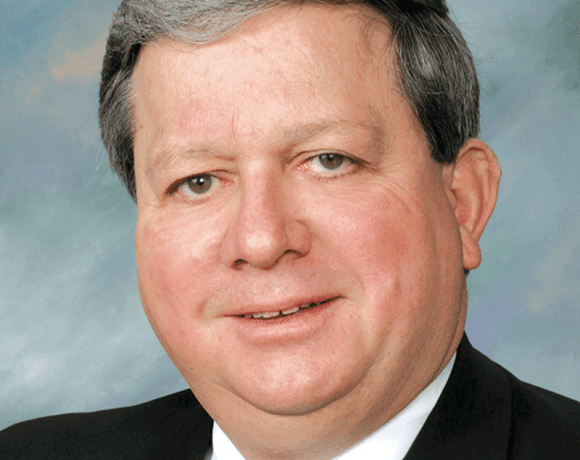