Despite Challenges, Local Restaurateurs Have a Positive Outlook for the Holidays 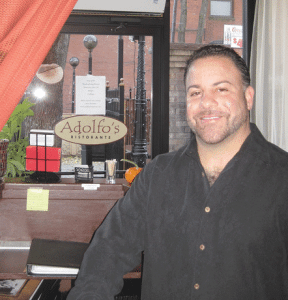 Victor Bruno has never run from hard work.
As a young boy, he sold cans of soda at the Italian Festival in Springfield’s South End, making a nice profit for pocket change. Fast-forward 30 or so years to 2011, when he used the most basic form of grass-roots marketing — the meet and greet, and food sampling — to brand his barely year-old Worthington Street restaurant, Adolfo’s Ristorante, an homage to his late father.
Bruno and two of his employees spent four weekends in the West Springfield and Enfield Costco locations offering samples of his stuffed mushrooms to promote his new venture through the Costco discount gift-card program.
“I was there from when the store opened until I ran out of mushroom caps each time, and I met thousands, and I mean thousands, of people, and we would talk about the restaurant and downtown Springfield,” Bruno recalled.
He heard it all, and the most pervasive issue was the perception that Springfield isn’t safe anymore. “But I told them, it’s the entertainment district, and we have valet parking and good lighting; you’ll have a great meal — and I’ve seen thousands of those cards come back.”
Bruno knows the restaurant business is one barometer of how willing the public is to indulge in discretionary spending. With the all-important holiday shopping season just beginning, there is some cautious optimism among the restaurateurs that BusinessWest spoke with, although it was tempered with concern about what will be a short holiday shopping season.
“Sadly, this was the latest Thanksgiving possible; we’ve lost a week of shopping time, and that hurts all restaurants,” said Robert Luz, president and CEO of the Mass. Restaurant Association (MRA). “But we continue to extricate ourselves from the Great Recession, and generally speaking, we’re starting to come out of this, and consumers are a little bit more confident about spending dollars.” 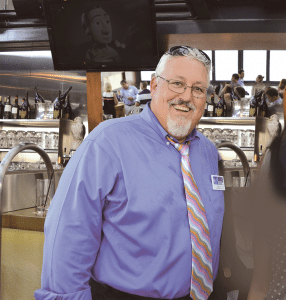 In spite of a shortened selling season due to a late Thanksgiving, Bob Luz says, consumers are more confident to spend.

Luz expects holiday sales to be flat or in the negative, mostly due to that lost week. His organization offers business assistance to restaurant-industry members — most importantly legislative advocacy. According to Luz, as restaurateurs get through this shorter holiday season, they have a potentially disparaging issue looming with a recent bill that just passed the Senate and is headed toward the House that could raise not only the minimum wage for all industries, but also the base of tipped wages for waiters and waitresses in the restaurant industry, increasing their minimum wages by 71% (more on this later).
For the restaurateur, food-price increases are only the beginning; city taxes, property insurance, workers’ comp, and liquor-liability costs are also increasing. “There’s only so much you can get from a stone,” said Bruno. “And all businesses have some of these costs, too. But in the restaurant business, we’re working with a profit margin of nickels and dimes.”
For this issue’s focus on restaurants, BusinessWest talked with some industry veterans about the holiday season ahead, as well as the much bigger picture — the challenging environment in which they’re operating and the prospects for improvement.

Main Menu
As if the Great Recession and recent food-price increases weren’t enough for local restaurateurs, a week before Thanksgiving, Senate President Therese Murray advanced a plan to raise the minimum wage from $8 to $11 per hour over the next three years. The Senate voted for that wage increase, and Luz of the MRA was prepared for that hike, which would certainly affect any business owner.
But in the same session, the Senate also voted to increase the minimum wage for tipped employees to half the minimum wage. With the tipped wage currently at $2.63 per hour, it would now force restaurateurs to pay them $4.50 per hour this year, a 71% increase, which will continue to increase over the next two years.
“It’s been frozen since 1999, because it works,” Luz said. “Over that time period, waiters’ and waitresses’ wages naturally increased because of menu inflation and because we educated our members’ employees to declare all of their tips.”
Technically, Luz said, employers have to meet the current minimum wage for those waiters and waitresses whose declared tips don’t equal current minimum wage, but that is rare because they usually do make solid tips. Waiters and waitresses in Massachusetts, he went on, are already paid the most in the country, as the U.S. Bureau of Labor Statistics reports that they earned an average hourly wage of $13.13 in 2012, when tips are factored in. Should this new increase for tipped employees pass, employers will be footing yet another increase for something that Luz said doesn’t need a separate increase.
The MRA offers its members information sharing, education and training, forums for networking, cost-cutting group-discount opportunities, and, most importantly, legislative advocacy.
“The restaurant business is highly labor-intensive, and when you affect wages like that, it’s dramatic,” Luz said. “We’re the entry-level point for a lot of jobs, but the business has a razor-thin bottom line.”
Luz added that the MRA is working to finalize a formal strategy to fight this matter in the Legislature.  But heading into the holiday season, there are significant issues that already exist for the network of Western Mass. restaurateurs.
For the past 14 years, Chris Brunelle has been the owner of Pinocchio’s Ristorante (formerly in Amherst, now in Three Rivers), and is also general manager of the new Bistro 21 at the Cold Spring Country Club in Belchertown. Through those two businesses, he’s come to the formal conclusion that there may be no bounce back to where things used to be pre-Great Recession.
“This is the new norm; the cost of doing business in the last year to two years for food alone has gone up 6% to 22%, and everybody is paying for the October snowstorm from two years ago because our insurance prices have gone up another 20%,” added Brunelle.  “That’s just the cost of doing business, and you can’t pass that cost down to your customer.”
Judie Teraspulsky, owner for the past 36 years of Judie’s restaurant in the center of the vibrant college town of Amherst, said her professional life revolves around when students are in town; she’s survived the Great Recession by streamlining every area that she can, and running the restaurant, from purchases to staffing shifts, with extreme efficiency.
“We are tight, tight, tight,” said Teraspulsky. “We don’t lay off employees, because they are the most important factor in our business.”
As hard as things get for Brunelle, his philosophy, year-round, is the same as Teraspulsky’s: he’s staying strong due to his allegiance to his employees, many of whom have families, and four specifically who have been with him for the full 14 years.

Gifting Limit
Rudi Scherff, manager of the Student Prince, a landmark eatery in downtown Springfield that just celebrated 78 years in business, is used to the ups and downs of the hospitality business. Scherff, who undoubtedly has one of the strongest and most affluent regular clienteles in the Pioneer Valley, said he’s getting the sense that, while there is apprehension and concern, people are a bit happier with at least the regional economic situation than they were a year ago.
Scherff told BusinessWest that the holidays are “huge” for his restaurant, which does a solid 20% of the year’s business from Thanksgiving to Christmas Eve, and half of the gift certificates sold are during that same time span. 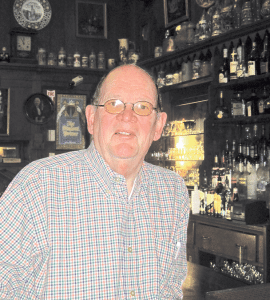 Rudi Scherff says the holidays are a very busy time, when half of the year’s gift certificates are sold for the Student Prince.

“We’re going to be busy this season, and the eight days before Christmas are as much as we can handle,” Scherff noted, adding that banquets and events, entertaining up to 90, are a big part of that equation.
While Teraspulsky may not be as straight out as Scherff this time of year, she still sees the holiday season as very important to her business.
“Where I shine during the holidays is that you can come in and do just a dessert or a popover, or one of our great cocktails,” she said, adding that her menu, from the beginning, has afforded her customers the ability to have whatever they want, when they want it.
Teraspulsky and her staff of 90 push the gift certificates hard to get that return that will pick up the cash flow once the 50/50 percentage of college students and traditional customers returns.
Bruno is also looking forward to this season, not only to see those Costco cards come back, but to sell more gift certificates in the restaurant, and he’s already booked early corporate parties in his private room upstairs, seating up to 45 people.
“There’s still that caution with spending,” said Bruno, recalling the days in his former restaurant, Caffeine’s, in the same location, where customers used to spend $100 on a bottle of wine.
“Now they’re only spending $25 to $30 on a bottle of wine, but at least they’re spending it here.”

The Garnish
The potential of a downtown Springfield casino complex in the years ahead provides holiday conversation and a giant question mark for many restaurateurs; while they are not sure if it will help or hurt them personally, ultimately, they hope that the pledge of far more people will materialize.
“We’re always optimistic come January, and for the [prospective] casino, during the construction phase — it’s going to be great for downtown,” said Scherff.  “And once it opens, it’s going to help some, hurt others, but hopefully it puts more feet on the street and gets more people down here.”
Bruno agreed, adding, “the perception of downtown is far, far worse than it actually is, but with a casino, there will be people, and people bring safety; my position has always been that we’ll be the safest downtown around.”
Until a decision is made, Bruno is doing everything in his power to overcome the challenges that all restaurateurs are facing this holiday season. His greatest compliments thus far have been from those who tell him that Boston’s North End, renowned for authentic Italian restaurants, has nothing on Adolfo’s.
“They tell me I should consider opening up another restaurant,” Bruno said, laughing as he explained, “because if you can make it in Springfield, you can make it anywhere.”