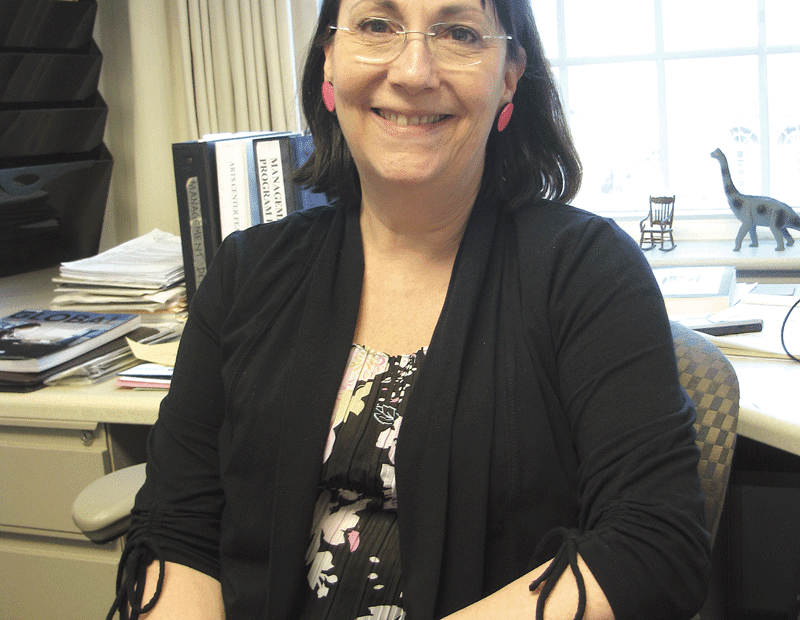 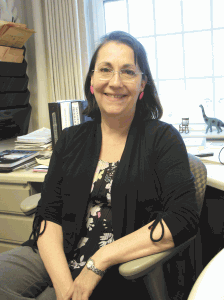 Jeanie Forray describes the arts and entertainment field as a growth industry.

As he talked about his exploits with the bass guitar, or at least as far as organized performances are concerned, Jonathon Eells made repeated use of the past tense.
“I was in a band with some friends … we played in high school for a while, but that was pretty much it,” said Eells, his voice tailing off. But he made it abundantly clear that, while his performing days are apparently over, he very much wants to still be involved with music — and make it his career, perhaps in the realm of managing bands, individuals, or a concert hall.
“I know a lot of people who play still, and I’d like to manage a band,” he said, adding that there are many directions his passion for the industry could take. “I could also manage a venue; I just want to be around music.”
This explains why Eells became one of the first students at Western New England University to sign on for a program that gives him one of the more intriguing — and envied — answers to the age-old question, ‘what are you majoring in?’
His reply is ‘Arts and Entertainment Management,’ and it’s a comeback that he says has earned more than a few responses like ‘that’s cool,’ or ‘I wish I was majoring in that.’
But he isn’t out to impress his classmates; he’s trying to position himself for a career in a sector that many 21-year-olds are intrigued by, and one that Jeanie Forray, associate professor and chair of the Department of Management (and chief architect of the new program), believes is very much a growth field, in both the arts and entertainment realms.
“This is a multi-billion-dollar industry with a need for individuals with knowledge and skills focused on the business side of the creative enterprise,” she said. “This is considered a growth field, especially with what’s happening with technology and the Internet, and graduates of this program will be prepared for a wide range of careers.”
Alyssa Beecy certainly hopes she’s right. She is another of the students who switched into this major, and, like Eells, she has her eye on a career in music, preferably representing artists or handling bookings for a venue. She knows this is the ambition of many people, and she’s still trying to figure out the road in front of her — probably to begin with one of many large firms (most of them located in Los Angeles or New York) that manage musicians and bands.
She also wants to be positioned for other kinds of opportunities in this broad realm, and for that reason she is interning this spring at CityStage and Symphony Hall in Springfield.
“We’ll see if that changes my direction at all,” she said of her internship, adding that she’s leaving her options open regarding both what she wants to do and where the jobs are. But for now, she believes she’s in the right major at the right time.

Achievements of Note
Forray told BusinessWest that the Arts and Entertainment Management program came about the way most recent additions to the portfolio of degree offerings have — through collaborative discussions among faculty members in various disciplines.
In this case, the dialogue focused on the recognized need for a management program focused specifically on arts and entertainment — similar to how Sports Management concentrates on that still-emerging field — and how the university could meet that need.
“I have had contact with the theater instructor and the music instructor at various times, and we’ve talked about the arts on campus and the curriculum,” said Forray, who brings to the table extensive experience in television production and post-production, facilities operations and sales, and work with such production companies as Entertainment Tonight, the Disney Channel, and Paramount. “And I’ve always had an interest in somehow linking my professional background with academia.”
The answer was a new major that would address both universal aspects of business management, and issues and challenges unique to the arts and entertainment worlds. And there are many of each, she noted, listing everything from the many challenges involved with running a not-for-profit agency (a description that covers most arts-related endeavors) to the rigors of the musician-management positions both Eells and Beecy are eying.
Meanwhile, it would also dovetail nicely with an institution-wide strategic initiative to elevate the arts on campus. “It seemed like an ideal collaboration to situate arts and entertainment in the college of business in a way that would be attractive to students who have an interest in the arts, but who are not planning to be performers or creatives in the process, but rather the people behind the art, behind the scenes,” Forray said.
Students who complete the program could see their diplomas translate into a number of intriguing job titles on business cards, representing talent or managing everything from arts festivals to community theaters; orchestra companies to television stations; art galleries to historical museums, she explained.
Forray told BusinessWest that the first offering in the program this past fall, a course she taught called ‘Managing Arts and Entertainment Organizations,’ featured textbooks, some guest speakers from within the industries, and some learning by doing — and that many of the courses will unfold in the same manner.
In this case, students read both Management of the Arts and Performing Arts Management: A Handbook of Professional Practices, while also hearing from a broad range of speakers. That list include Alexander Kennedy, executive director of the Eric Carle Museum of Picture Book Art; Tina D’Angostino, interim president, and Bevan Brunelle, marketing manager for Springfield CityStage and Symphony Hall; Dawn Helsing Walters, managing director of the Milwaukee Repertory Theater; Becky Schutt, senior consultant with Festivals & Events International, and Michael Kane, managing partner of Mt. Auburn Associates, the Boston-based planning, strategy, and evaluation company that has become a leader in the creative-economy field.
“This class is an introduction to the structure of arts organizations and entertainment organizations, which tend to be somewhat different than other industries in that they have both creative and functional sides,” she explained. “Students do research on a company in an area that interests them to determine what the challenges are for that kind of organization in the current business environment, and we have a number of speakers.”
Other arts- and entertainment-specific courses include:
• Business Law for Arts and Entertainment Management, which focuses on, among other things, industry-related matters such as intellectual property, copyright, First Amendment, representing talent, provenance, and autehtication;
• Arts and Entertainment Venue Operations, which provides an overview of venue management, including issues related to various arts and entertainment facilities;
• A Seminar in Arts and Entertainment Management, a capstone course that examines contemporary issues and challenges for managers in the industry; and
• The Arts and Entertainment Practicum, which focuses on the management process involved in producing events within the arts and entertainment domain. During the course, students produce an arts or entertainment event on campus or in the local community.
As with other business and management programs at the university, internships will be a key part of the learning experience, said Forray, adding that such opportunities provide exposure to the industry, hands-on work in that field, and the potential to make a connection that could lead to employment upon graduation.
She said students like Beecy are finding internships with area organizations like CityStage and Symphony Hall, and that such experiences could help keep graduates in Western Mass., where they could become part of the effort to expand the cultural community regionwide.

The Big Finale
Eells said he looked into sports management early in his college career because he was (and still is) intrigued by that industry.
But he found that his real passion is music, which holds a number of career possibilities beyond performing, as he’s learning. If all goes well, he’ll accomplish his main goal of “still being around music,” but going much further and making it a rewarding career as well.
In other words, even though he doesn’t perform on stage anymore, he can still make some achievements of note — quite literally.