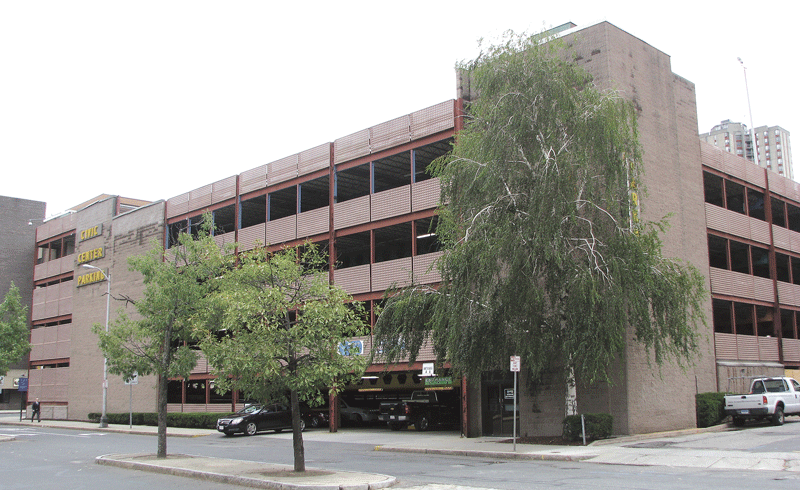 The MassMutual Center garage is critical to parking capacity downtown, but was in dire need of repairs.

At a time when parking is at a premium in downtown Springfield, the central district’s largest parking garage, serving the MassMutual Center and numerous local businesses, plays an important role for workers and event-goers alike. But the five-story structure has long fallen into disrepair.

“We’ve had problems with drainage and water leaking from the roof through the various levels and damaging property and people’s cars,” said Mary McNally, executive director of the Springfield Parking Authority. “Then all that stuff accumulates on the iron, so that’s rusted; we’ve had a significant amount of property-damage claims.

“Overall, we just wanted to maintain the structural integrity of the building,” she went on, “because it’s the main garage in the city, and there’s no plan at present to replace it, so we needed to do somewhat of an intermediate level of repair.”

For the past several weeks, Marois Construction has set up shop in the garage, barricading off large swaths of parking spaces as workers perform a number of repairs aimed at keeping the structure serviceable for the near future. The job is expected to be finished in mid-November.

Renovations include a host of needed upgrades, McNally said. “They’ll fix the drainage and fix the waterproofing, restore the roof integrity, and install new drains. There will be some painting, some remortaring of the exits, some of the cinderblock needs to be restored, and many of the bar joists, which support the deck structure on each floor, need to be replaced. They’re also resurfacing some of the concrete on the lower levels that get the most traffic.”

Joe Marois, president of the South Hadley-based contractor, said the goal is to complete an intermediate repair that will hold up for the foreseeable future whether or not the garage is eventually rebuilt.

“We’ve recently finished up all the concrete, masonry, and block repairs that had to be done. We’re changing out some of the plumbing, drainage, and so forth, and doing some miscellaneous concrete repair and reinforcing some of the existing steel,” he told BusinessWest. “We’re addressing the concerns in the city’s engineering report.” 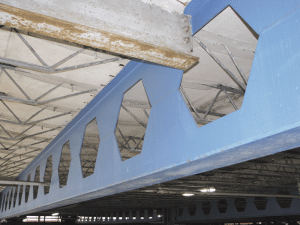 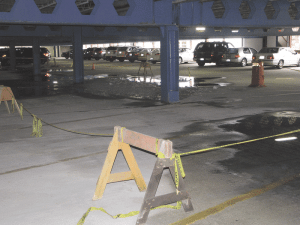 Top: some of the rusted ironwork in the garage. Bottom: one of many areas off-limits to parkers until issues with drainage and loose debris can be remedied.

The 44-year-old MassMutual Center garage — which borders Harrison Avenue, Dwight Street, and Falcons Way — is the oldest and highest-volume garage in Springfield’s central business district, with a maximum capacity of 1,232 vehicles.

But the structure has been problematic for users for some time, with certain areas roped off on occasion to protect vehicles from debris. Preserving its functionality is critical at a time when the city will lose close to 500 spaces from two downtown parking garages under the I-91 viaduct.

That viaduct is undergoing a massive reconstruction that will close down a mile-long stretch of the interstate for at least two years starting this fall, making hundreds of parking spaces off limits. But McNally, who meets with state Department of Transportation officials every three weeks to review the upcoming construction schedule, is convinced the central district will have enough parking.

“I was worried a year ago, but not currently,” she said. “The contractor [Framingham-based J.F. White Contracting Co.] is very cognizant of the impact on both garages, north and south. I’ve been assured repeatedly at these meetings that they will do what they say they’ll do — and the contract they have with the state requires that they take no more than 450 spaces from the second levels on both garages. With the current occupancy and capacity, I don’t expect any problems at all. That’s very good news.”

One reason for reassurance is the fact that the repair work on the nearby MassMutual Center garage promises to recapture about 100 spaces perennially lost, especially in the winter, to leakage and drainage problems. “If those issues are remedied, those spaces come back,” she said.

In addition, McNally noted, the fifth-level roof deck, which is typically chained off, may also be available for use soon, bringing all 1,232 spaces in the garage back into play.

“There have been considerable engineering studies assuring us the roof deck is safe for parking, and that’s 200 spaces,” she explained. “The roof was never declared unsafe, but there wasn’t demand for it. We anticipated there would be demand, though, which is why we went ahead and did those tests, giving us the comfort that it’s safe.”

The Springfield Parking Authority, which is funded by parking revenues, oversees on-street and off-street parking in Springfield, including the downtown parking garages. The Marois project is part of a $4 million capital plan for improvements to city garages.

The Parking Authority has also been working with MGM Springfield on a long-term commuter-parking arrangement during construction of the $800 million casino in Springfield’s South End — necessary, because the project footprint will eliminate several parking areas in the district.

Marois said both major construction projects downtown — the viaduct restoration and the casino — are going to strain parking options to some degree, making his company’s repair work on the MassMutual Center garage that much more important.

“I totally think that’s going to be a big deal,” he said. “We’re going to lose a lot of spaces underneath the viaduct while they’re doing that work. I think the city has taken the right steps here in anticipation of that shortage.” 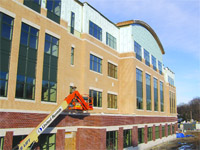