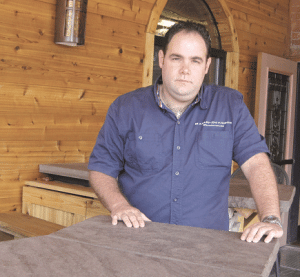 Jeff Daigneau says creativity and hard work have helped Lattitude grow, to the point where the restaurant thrives even during the challenging Big E weeks.

Jeff Daigneau doesn’t know how many times he’s told the story. But he does know that it never gets old.
He was referring to what has become local culinary legend of sorts, the saga of how the most unlikely, but now the most popular, item on the menu at his restaurant, Lattitude, came to be.
“I messed up during the Big E in 2008 and dropped a bunch of brussels sprouts in the frialator,” said Daigneau, owner and chef at the establishment on Memorial Avenue in West Springfield, directly across from the fairgrounds. He put what came out of the frialator on the bar for consumption — and they didn’t last long.
“Now, they’re the hottest thing going — everybody’s serving them,” he told BusinessWest, adding that the vegetable that so many people love to hate has become his eatery’s signature appetizer — and an unofficial logo of sorts.
Indeed, the vegetable now adorns the back of his business card and the company’s letterhead, and it will soon be on T-shirts to be worn by the staff.
No one calls Lattitude the ‘house that Brussels sprouts built,’ but they might as well — it’s not much of an exaggeration. But the house was actually built by creativity, patience, and perseverance, and because all three have been exhibited in abundance, the house is getting bigger.
Much bigger.
The restaurant, which sits in the middle of what was a large, multi-tenant building that Daigneau now owns, is expanding in several directions within that complex. An outdoor patio bar featuring live music was added this summer on the west side of the property. Meanwhile, an 80-seat banquet facility will open in formerly vacant space on the east side of building in mid-November, and a new, much larger bar area, to be created in space formerly occupied by Memo’s restaurant on the west side of the building, is in the design phase. In the original restaurant, space is being reconfigured, and private meeting rooms are being expanded.
The ambitious series of undertakings, highlighted by the recent installation of a new ‘Lattitude’ sign made of brushed copper, could be called a testimony to the power of fried brussels sprouts. But it’s more of an indication of how the restaurant has become a fixture only a few years after barely surviving its first fall in the shadow of the Big E (more on that later).
“It’s really flattering that people think that much of us,” he said, noting that his experiences to date have been a giant learning curve. “I’ve been doing this since I was 13 years old; I’m 36 now, and every single day I learn something new.”
For this issue and its focus on holiday party planning, BusinessWest looks at what Daigneau’s learned, and how he’s applied those lessons effectively enough to make Lattitude one of the region’s more intriguing business success stories. 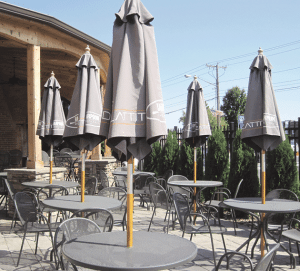 Retelling another story he’s related often, Daigneau said that, during his first fall on Memorial Avenue, he decided to stay open during the 17-day Big E when most all other restaurants in that area shut things down.
They close because the exposition has a tendency to drain traffic from such establishments rather than create it. Many long-time patrons of those eateries also decide they’re not going to fight Big E traffic and dine elsewhere instead.
Daigneau’s decision nearly put him out of business, by his calculation, but the experience provided an important lesson. Today, instead of trying to compete with, or simply survive, the Big E, he is effectively partnering with it. At least that’s the term he uses.
Elaborating, he said he’s learned how to cater his menu and his entertainment to the two primary constituencies at the Big E — visitors to the show and the vendors who often arrive days before it opens and are still packing up long after it ends.
The key to mastering the Big E, said Daigneau, has been a combination of offering a more relaxed atmosphere during fair weeks, especially for vendors, and offering a variety of live bands, food and drink specials, and promo nights, as an extension of what’s already going on over at the Big E.
“I’m not going to get everybody, so I put posters in the windows for events we’re going to have,” he explained. “I try to do things that would bring people in the door.
“I’m not stepping on anybody’s toes,” he went on. “The vendors just want a place to get out and get something to eat, because otherwise, they’re cooking in their campers.”
This imaginative approach to navigating through late September is just one element in Daigneau’s success quotient. And it’s part of a larger operating philosophy of listening to customers and potential customers and giving them want they want — even if, in the case of those Brussels sprouts, they didn’t know they wanted it.
And in recent years, what he consistently heard from patrons is that they want more — as in more space, more options, and more venues for different types of events.
The elaborate renovations and new building initiatives are designed to meet all those needs.
As a lessee, Daigneau had to look at the unattractive yellow stucco plaster on the outside of the building, but now the contemporary-style improvements have made the choppy architecture look like a cohesive city block, he said, which matches the elegance and creative quality of what’s happening inside.
The entire east side of the building is being renovated for banquets; the bathrooms are moving to the west side, the dining room will be expanded to accommodate 120 people, and two new rooms, for up to 12 and 30 patrons, respectively, are ready, or will be, for the holidays. The small, cramped kitchen was expanded recently, and a new catering kitchen is under construction.
“Our off-site catering is going to explode with that new kitchen,” said Daigneau, noting that what started as a few scattered requests for Lattitude menu items has morphed into a solid business opportunity with enormous potential.
The same could be said for banquet, or large-party, business, said Jamie Cardoza, Daigneau’s event specialist. “People were asking for larger venues, and we had to essentially turn business away,” she said.
Daigneau said there were enough of these requests to inspire the new banquet facility. “We had guest requests for parties of 50, 80, or 100,” he noted. “And it just grew into, ‘well, I own the building now; what do we want to do?’”
Plans for the rest of the building, specifically the old Memo’s area, are in the process of being designed. Daigneau said the second floor of the building will remain his office area and won’t be leased out.
While Daigneau’s original plan was to do all the work at once, he ultimately opted to phase it in, a decision that, in retrospect, has worked out well because disruption has been controlled and the impact on the overall business has been minimized.
And in a way, the new look and feel of Lattitude is consistent with Daigneau’s philosophy of continuously changing and reinventing to keep things fresh.
Indeed, while other restaurant owners and managers are loath to remove an item from the menu, Daigneau is fearful of letting his menu get stale.
He said the typical response from his staff when he changes up the menu is, ‘are you out of your mind?’
“But if you’re not moving and shaking and you’re not changing things up, people are going to get bored, and things are going to get stale,” he explained. “The menu has to change, and the staff has to stay fresh, or there are a million opportunities for our customers to go somewhere else.”
One dish that has to make a seasonal appearance every year is his pumpkin ravioli with seared scallops and walnut sage cream sauce.
“It’s the most popular dish we’ve ever done, and it’s one of those things I just can’t take off, and if I do, I get threatened,” he said with a sardonic smile.
It’s the same look he gives his staff when he tells them what he has in mind for his popular dinner series on the third Monday of every month, an event that offers a five-course dinner, with a different cocktail paired with each course.

Room For Dessert
Late last month, Daigneau served as the ‘celebrity professional judge’ for a Big E bread and dessert contest featuring creations fashioned from Fleischmann’s yeast.
That assignment speaks not only to his new outlook on the Big E as partner, not competitor, but also to just how far he has come in five years — from a chef with a dream to an entrepreneur with a dining destination in the midst of exploding growth.
The brussels sprouts on his business card have become a symbol of that success, and so has the new sign over his door.
“It’s finally gotten to the point where I can look up to that sign and say, ‘you know what? I did OK.’”
Actually, much better than OK. 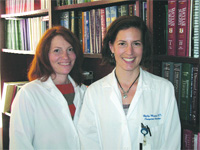