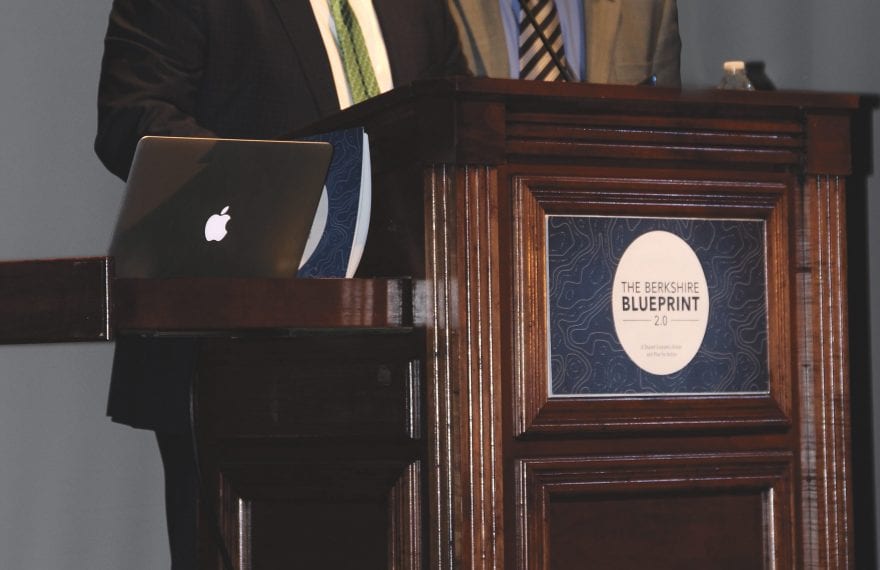 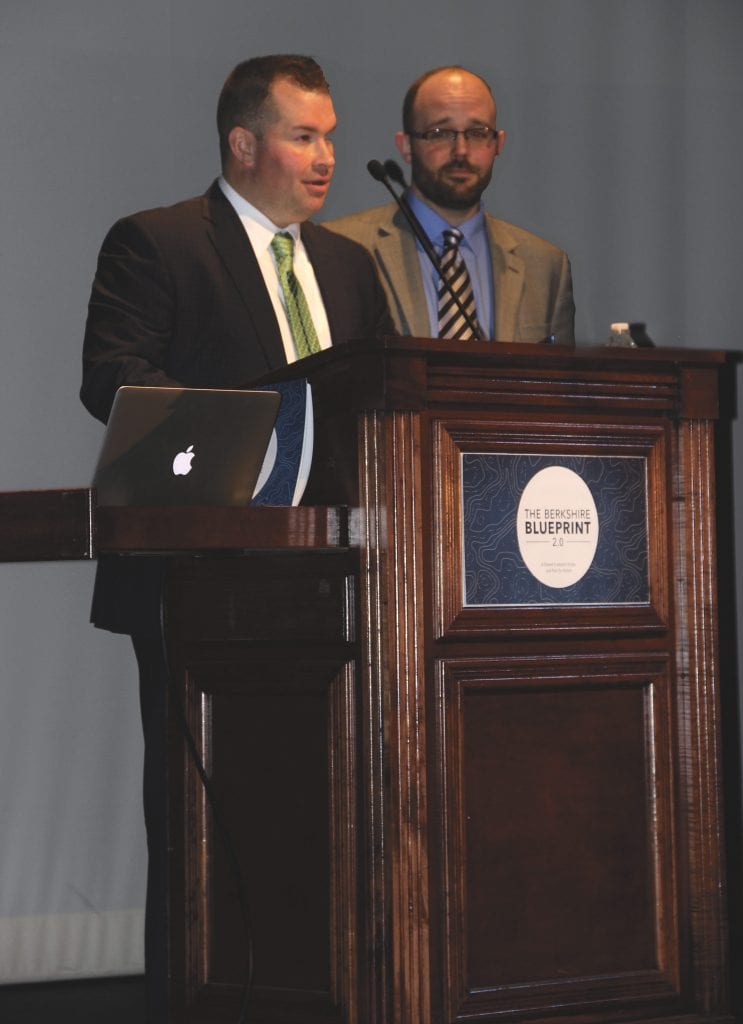 Jonathan Butler knows what happens to a lot of reports, and he’s determined to avoid that fate.

“This wasn’t intended to be just a two-year study that ends up as a report that sits on a shelf,” he said, referring to Berkshire Blueprint 2.0, an 80-page action plan of sorts for the Berkshire County economy. “It very much means to be a new look at our economy, a new baseline for where we are that identifies challenges we have in different areas and action steps needed to move forward.”

The project, the successor to the original Berkshire Blueprint released in 2007, was overseen by 1Berkshire, the regional economic-development agency Butler serves as president and CEO.

The report’s most notable feature is how it breaks down the economy into five ‘clusters’ — advanced manufacturing, the creative economy, food and agriculture, healthcare, and hospitality and tourism — and then lays out the challenges facing each cluster, who some of the main stakeholders are, and a series of ‘action steps’ aimed at spurring economic growth.

“We’ve made a process that’s accountable to itself and the stakeholders,” Butler told BusinessWest. “We have a small-business economy in the Berkshires, with a lot of business sectors, and approaching it from this vantage point is a helpful way to establish more creative problem solving and open up doors to more scalability for our economy.”

He admitted there are far more than five key clusters in the region’s economy, specifically citing education, financial services, and e-commerce as three others that may be woven into future iterations of the blueprint. But 1Berkshire had to start somewhere, and chose clusters that import wealth — in other words, bring money into the region from outside — and have shown growth over the past decade with the potential to scale up further.

“It’s all about getting different businesses outside of their silos to create more collaboration, more interactivity — to create an environment where things can take off organically.”

‘Scalability’ is a word that comes up repeatedly with Butler, who unveiled the plan at a recent, well-attended public forum alongside Benjamin Lamb, 1Berkshire’s economic development director.

“We’ve lived through the dialogue of a declining economy and job loss, and the narrative for many years has been to bring more jobs into the region,” he explained. “But we’ve pivoted away from that. We don’t need more jobs in the region; we need scalability for existing jobs and a better hiring pipeline. There’s a disconnect between the available workforce and the skill set and type of workforce businesses need.”

“There’s also a strong sense of momentum and progress that wasn’t here 15 years ago. That’s something to be excited about, and something we want to see evolve in the coming years.”

For evidence, Butler said there’s typically 1,300 to 2,000 jobs posted in the region at any given time, and they span the spectrum of the workforce, from entry-level to mid-career, management, and upper management. Many of the blueprint’s action steps take direct aim at identifying, connecting, and training potential workers for lucrative careers.

“A lot of employers here do a great job innovating in their sector, in their market, and are in a position where they can be scaling up, growing, expanding into new products and expanding product lines — but they’re not confident they can take the leap and scale the company because they’re not finding the workforce they need to fill those jobs.”

As an example of how the report dives into the five sectors, let’s consider the creative economy, which comprises segments like visual arts, performing arts, literary arts, design, film and media, and museums and cultural institutions.

The blueprint notes that the sector has seen 9.5% job growth since 2010, and the concentration of employers in this realm is 62% higher in the Berkshires than it is nationally, spurred by rapid growth in the northern part of the county.

Assets include a diversity of business establishments, institutional support by the likes of the Berkshire Taconic Community Foundation (BTCF) and Massachusetts College of Liberal Arts, and existing collaborative relationships across the county. Challenges, the report notes, include further engaging local residents, overcoming perceptions to demonstrate the economic importance of the arts, sustaining organizational support, and providing housing and transportation for seasonal employment.

With these factors in mind, the blueprint’s recommended action steps include convening the region’s major cultural institutions in dialogue, developing an intensive business-resources-awareness campaign, providing support to the BTCF and the Creative Commonwealth Initiative, reconvening the Creative Resources Conference, creating a partnership between the Berkshire Innovation Center and the creative community, and expanding the Assets for Artists program, a MASS MoCA initiative that provides professional-development opportunties — and housing — to emerging artists.

Collectively, that’s a mouthful, and it’s only the barest summary of just one of the five sectors. (The full report, and an executive summary, are available at 1berkshire.com.) But it suggests the copious work that must follow if the blueprint is to avoid becoming just another binder collecting dust.

“There are real challenges, and we have to work in collaboration to overcome them,” Butler said. “But there’s also a strong sense of momentum and progress that wasn’t here 15 years ago. That’s something to be excited about, and something we want to see evolve in the coming years.”

While much of the Berkshire Blueprint focuses on the five central clusters, the report also identifies several cross-cutting issues that impact the region at large, including all clusters.

For example, consistent access to high-speed broadband internet has long been a challenge in Berkshire County. Recently, actions on the state level have helped bring communities up to an equitable standard of broadband access and internet speed, but further advocacy and work are still needed, especially for residential access.

In addition, New England’s energy costs are significantly higher than they are in other regions of the country. With the retiring of regional power plants, lack of new plant construction, high cost of fuel distribution, and a limited pipeline infrastructure, the Berkshires face significantly higher energy costs compared to other areas of the country and the Commonwealth.

In the realm of transportation, gaps in public-transit services, inadequate evening bus service, a lack of coordination of private and public transportation assets, and challenges of getting to and from employment reliably are among the region’s nagging challenges.

Finally, population loss has been a persistent issue for decades in the region. 1Berkshire’s Berkshire Initiative for Growth began to lay groundwork for recruiting and retaining individuals to the region to curb this trend. While portions of the report were implemented, a number of components were laid out as the responsibility of other members of the regional business community to integrate.

“Population loss has been a mature conversation in the Berkshires,” Butler said. “The reality is, we’ll probably see another decline of some sort in the 2020 census, which would continue a half-century trend. But I’m optimistic that a lot of work done over the past five or six years will eventually shift that. We’re seeing more and more young families come to the Berkshires for a variety of reasons: quality of life, work-life balance, and the fact that our economy is quite big and diverse for such a small region.”

The blueprint authors were quick to note that the decades-long national decline of traditional manufacturing has had a negative effect on Berkshire County, and that the departures of long-time major employers such as General Electric and Sprague Electric devastated the local economy.

“For too long, the narrative has been that our best days were behind us, confined to faded newsprint and wistful memory,” they note. However, “that narrative is out of date. For several years, Berkshire County leadership has felt a sense of cautious optimism that the tide is turning. New buildings, businesses, and partnerships are springing up everywhere. With the knowledge that Berkshire County has seen $1 billion in investment over the last three years, the writing is on the wall: the days of doom and gloom are over. The new Berkshire narrative is about growth and opportunity in a diversified regional economy, and there is room for everybody at the table.”

That’s optimistic talk for sure, and Butler believes it, noting that he and his wife are in their late 30s, want to stay in the region for a long time, and believe it’s a good place to be.

“When we made the move home to the Berkshires in our late 20s, we saw a lot of potential,” he told BusinessWest — along with plenty of challenges. “But the narrative then and what we see happening in the future are different — and that’s become a more mainstream idea now.”

An idea that, with any luck, will do much more than sit on a shelf.