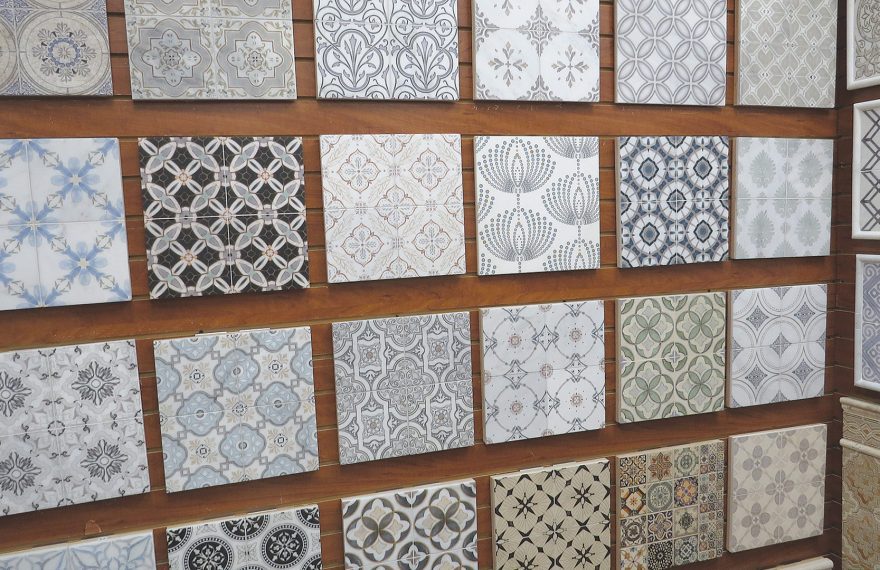 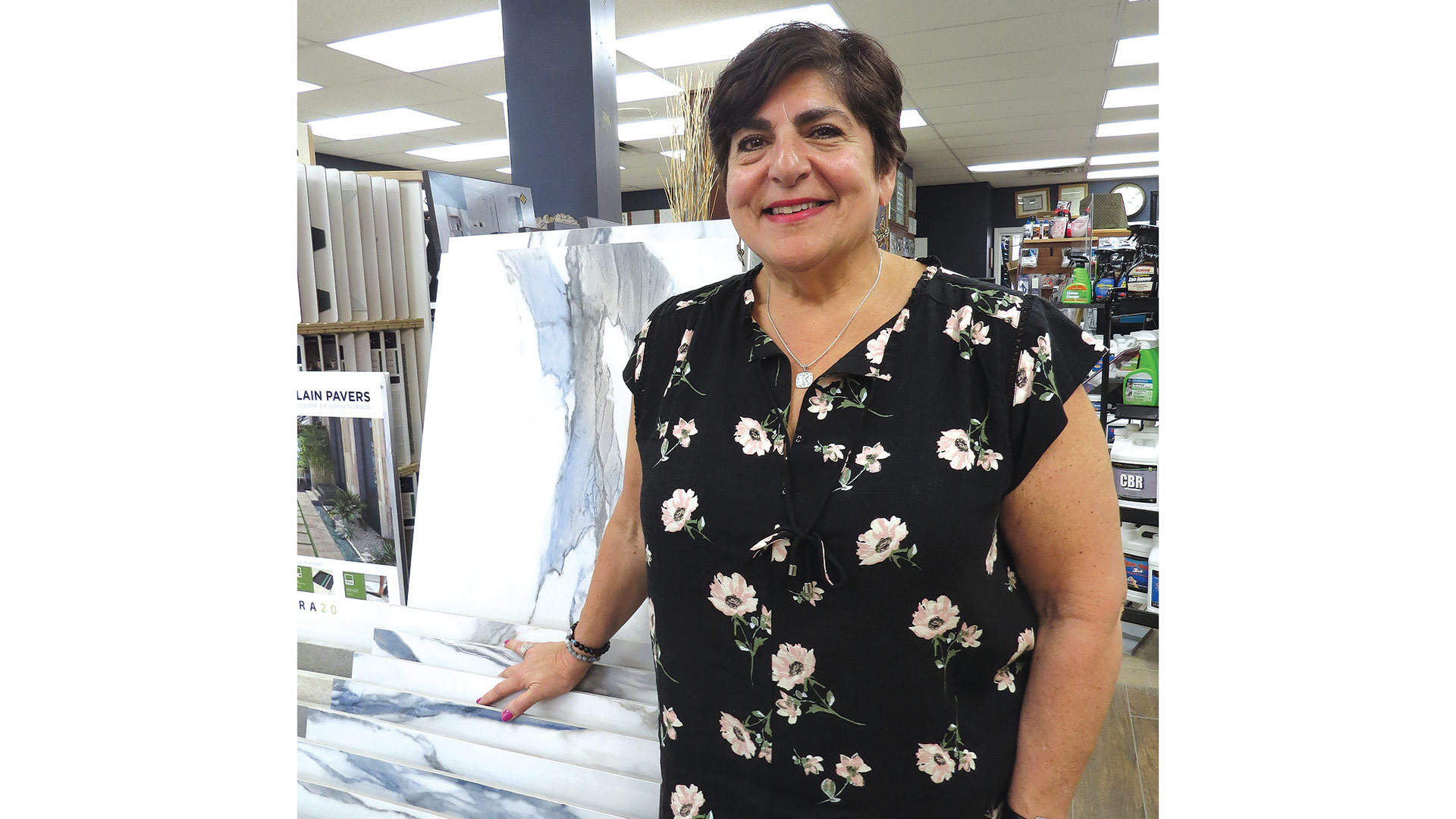 Karen Belezarian-Tesini says the mood in the ‘coverings’ industry is one of cautious optimism.

The four-day event was staged at the Las Vegas Convention Center roughly a month ago, and while there was a good crowd, things weren’t quite back to what they were in 2019, attendance-wise and otherwise, observed Belezarian-Tesini, who has been to quite of few of these as manager of Best Tile’s Springfield location on Belmont Avenue.

Summing up the show, she said that, as always, there were hundreds of thousands of square feet of new products on display, and an opportunity for her and other attendees to get a clear understanding of the latest trends and innovations — which include everything from tile products that “look like wallpaper,” as she put it, to ever-larger sizes of tile for walls and floors — up to 60 inches by 120 inches in some cases, to growing options in porcelain, marble, and glass mosaic products.

As for the mood at the show … Belezarian-Tesini, described it as one of caution laced with large doses of optimism. The caution part is understandable, she said, given the stories dominating the news lately, everything from runaway inflation and its impact on prices to ongoing supply chain issues; from war in Ukraine to recent talk about the possibility of recession. And then, there’s the stock market and its precipitous decline. In short, there are many colliding factors that may certainly impact large purchases.

“People are cautiously upbeat,” she said. Everyone was so concerned and consumed with COVID — it’s all anyone talked about,” she said. “Then, the economy started to crazy and inflation started to go crazy — so there is caution about what all this means.”

“Overall, 2020 was up and down, but 2021 … was very, very busy. From Jan. 2 on, people were just constantly coming in and calling because they were remodeling. They were stuck at home looking at their four walls. It started picking up in the fall of 2020, and then in 2021, we did crazy business — it was fantastic.”

The accompanying optimism results from ongoing and very upbeat patterns (that’s an industry term) of business, she went on, adding that while the first quarter or two of the pandemic was slow for the broad coverings sector, as both consumers and those in the industry figured things out and waited for some dust to settle, by that fall, things were ‘crazy,’ as she put it. And in many respects, they still are.

“We’re still incredibly busy — things haven’t really slowed down at all,” she told BusinessWest, adding that, despite some gathering clouds, there is general optimism that things will stay this way.

Indeed, the trends, and the mood, on display at the Coverings show in Las Vegas, pretty much echo what Belezarian-Tesini can see and hear at the Belmont Street facility, where the pace of business has been steady since the fall of 2020, when many of those who were essentially trapped at home and not entirely happy with what they were looking at decided to do something about it.

These solid times blend with host of challenges that range from longer wait times for some products to back-ups in the warehouse as ordered products sit and wait as customers wait for other needed items before they proceed with remodeling projects. 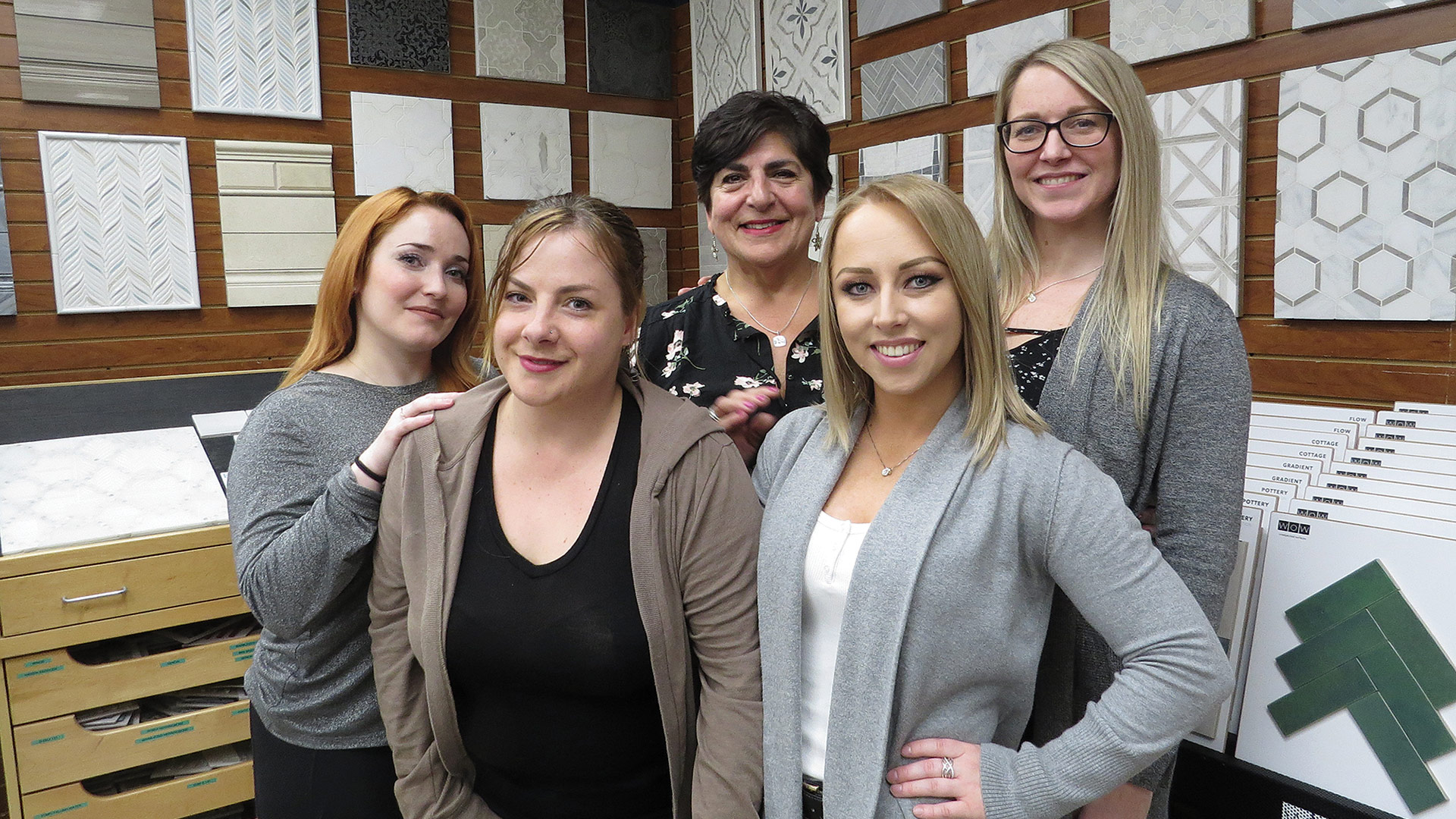 “We have some purchase orders that we placed in November, and we still haven’t seen them,” she explained. “But what we have, we have plenty of.”

For this issue and its focus on landscaping and home improvement, BusinessWest talked with Belezarian-Tesini about what she saw in Vegas, what she can see in her own showroom, and what she foresees short and long term.

The Best Tile location in Springfield is a place where the past, present, and future come together. Sort of. Certainly the past and the present.

This is where Harry Marcus, who, with his wife, Mollie, sold tile out of the back of a car at one point, planted the roots that would eventually grow into a business — known originally as Marcus Tile and eventually as Best Tile — with 28 locations across the Northeast and beyond.

As for the present, this is where those current trends are playing out, and where Belezarian-Tesini and her team are trying to contend with steady demand and those aforementioned challenges mentioned. And as for the future … well, it may not be at this location.

Indeed, Belezarian-Tesini said there has been an ongoing search for a new facility for nearly five years now. It has taken her and other team members across the region and especially to higher-traffic areas, including Riverdale Street in West Springfield and Memorial Avenue in Chicopee.

There have been some “near misses,” as she termed them, especially on Riverdale Street, but a new location has proven elusive. The search continues, because a larger, more modern facility is needed, she said.

Meanwhile, there is also some succession planning going on, said Belezarian-Tesini, adding that she and several other branch managers are approaching retirement, and this proactive, forward-thinking company wants to be ready for that day.

Getting back to the present, and the recent past, Belezarian-Tesini said these are intriguing times for this business and this industry.

Turning the clock back to the start of the pandemic, she said the business managed to stay open, but with some huge adjustments when it came to how business was done.

“We were open, but in the early days, the door was locked,” she explained. “We did everything virtually. Customers would either call in or email; we would gather samples that they saw on our website, we’d put them in a bag, we’d put them outside the front door, the customers would pick up the samples, they’d call in their orders, they’d return their samples back at the door, we’d disinfect everything and put them away, and then we’d start all over.”

Elaborating, she said that because of the reports that COVID could live on surfaces, every piece of tile in the showroom had to be disinfected regularly, at a time when disinfectant was hard to come by. Overall it was a trying time, but unlike many retailers, the company made it through without layoffs and without losing any employees.

“It was crazy,” she went on, adding that by that fall, there would be a different kind of crazy as homeowners, many of them with money to spend because they weren’t spending it on vacations or much of anything else, looked to make some improvements.

“Overall, 2020 was up and down, but 2021 … was very, very busy,” she recalled. “From Jan. 2 on, people were just constantly coming in and calling because they were remodeling. They were stuck at home looking at their four walls. It started picking up in the fall of 2020, and then in 2021, we did crazy business — it was fantastic.”

And, for most part, things have not slowed down to any large degree, she went on, adding that the only thing that has slowed down is the pace of products being shipped from the warehouse to customers, who can’t proceed with a remodeling project until they have everything they need.

“So many of the jobs that we have tile for are sitting in our warehouse, because the customer can’t get the refrigerator or the faucet or tun or the sink or the toilet,” she explained, adding that, overall, this is not a bad problem to have. “The jobs are taking an inordinate amount of time; for a while, it was lumber it was the issue, now it’s things like backer board or the foam board being used for walls now that are on back order. Or, when we get 600 to 700 sheets of it, and within a week, it’s gone — sold out. It’s crazy … we can’t keep up. No one can keep up.”

Because the company is a direct importer, it has not been as hard hit by supply chain issues as some of the smaller companies and stores, she went on, but all players in this industry are being impacted to some extent, whether it’s with delays or the spiraling cost of shipping containers.

“So many of the jobs that we have tile for are sitting in our warehouse, because the customer can’t get the refrigerator or the faucet or tun or the sink or the toilet. The jobs are taking an inordinate amount of time.”

Thus far, the company has managed to mostly absorb these increases without passing them on the customer, she said, noting that there has been one increase, while other companies have had several.

As she offered a quick tour of the showroom, Belezarian-Tesini pointed to some of those newer, wall-paper-like patterns, different options in marble and porcelain, and two of those 60-by-120 tile panels that are now in demand — far more on the West Coast than they are here.

‘There are only a few companies around here that could even install something like this,” she told BusinessWest, adding that this may likely change because this is the direction this industry is moving in — or one of them anyway.

For 66 years, Best Tile, and Marcus Tile before that, has been at the forefront of such innovations and trends, she said, adding that this is one pattern that won’t ever change.

As for the rest of them, the company will continue to evolve as it has for the past seven decades and continue to have customers needs … covered.