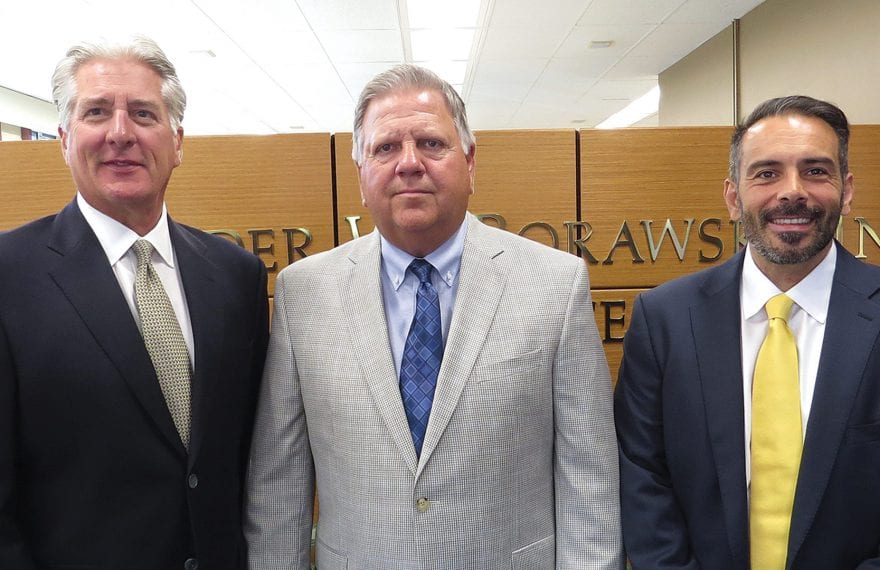 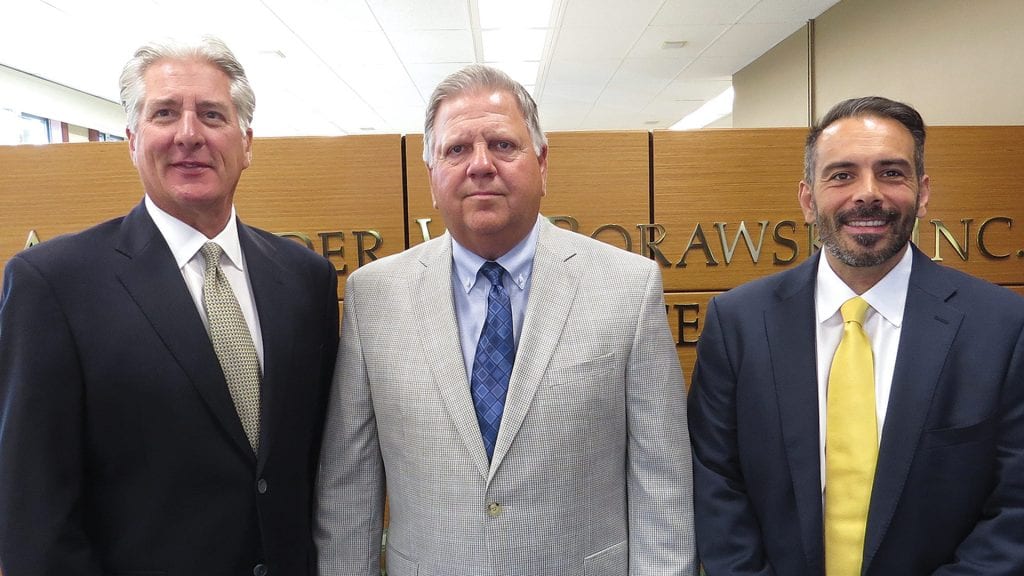 As he talked about insurance, and also about the agency started by his grandfather almost 91 years ago, Bob Borawski drew a number of analogies to the banking industry.

Specifically, he referenced an ongoing pattern of mergers, acquisitions, and overall consolidation that has left fewer players, and far fewer smaller, independent agencies.

In banking, said Borawski, who has been on the board at Florence Bank for many years now, this activity has created opportunities for those players with a track record of strong customer service and the ability to fill a void left by those agencies swallowed up by larger interests with fewer ties to — and employees living in — the 413. At the same time, while rates and prices are always important in banking, relationships are more important.

And, by and large, it’s the same in insurance, Borawski said.

“Anyone can give a rate that’s a half or five-eighths of a percentage point less,” he said in reference to banks. “But beyond the rate, you want to have a good relationship with your client. Like an independent bank, we have a focus on being independent — we’ve chosen not to be gobbled up by one of the larger players because we think independence is important. We still think people appreciate being local.”

Dave Malek, vice president of the company, who came aboard nearly 30 years ago, agreed.

“It really is all about relationships,” he noted. “And I think that is what gets lost when you get swallowed up by a larger conglomerate.”

In essence, Borawski said, he, Malek, and the other 15 employees at this company launched at the height of the Great Depression in 1930, are continuing a pattern of personalized customer service and relationship building that was started by his grandfather, Alexander Borawski, and continued by his father, Robert.

And this pattern has served the company well, especially when it comes to commercial lines, where the Borawski company has built a large and diverse portfolio that continues to grow.

Indeed, at present, commercial accounts comprise roughly 75% of the book of business, said Malek, adding that the portfolio includes everything from manufacturers to auto dealers; nonprofits to general contractors.

And this commercial business has spawned growth in numerous areas, especially employee benefits but also personal lines, said Borawski, adding that the ability to provide a wide range of products and services to customers has been a formula for growth going back nine decades, but especially in the past 30 years as the company has sharpened its focus on its commercial portfolio. 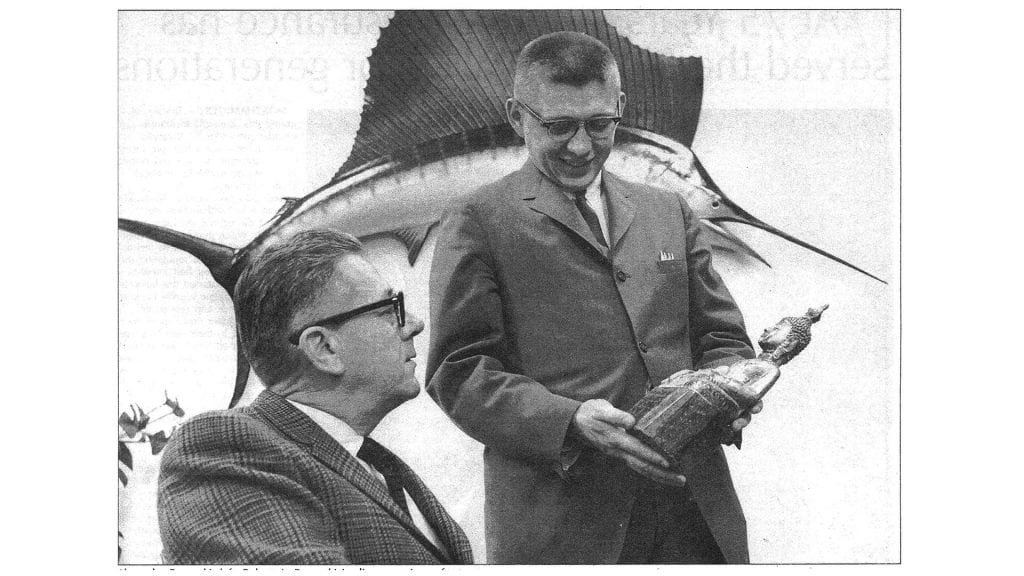 The first and second generations of leadership at Borawski Insurance: Alexander Borawski, left, and Robert Borawski.

Overall, this agency has been conducting business in much the same way it has since the doors opened, even if COVID-19 forced some changes when it came to where employees were working and how work was done.

Moving forward, the business plan calls for simply “more of the same,” said Borawski, adding that the company intends to take full advantage of the trend toward consolidation within the industry and continue its focus on relationship building.

“You’re either moving forward or moving backward, and our plan is to continue to grow our way — organically,” he said, adding that he believes the company is certainly well-positioned to achieve that goal.

For this issue and its focus on insurance, BusinessWest talked with several team members at Borawski to get a full understanding of not only where it’s been, but where it wants to go and how it intends to get there.

Borawski told BusinessWest that, upon graduating from Stonehill College in 1980, he had no plans to join the family business. Instead, he went to work for then-emerging office-supply company W.B. Mason as a salesperson.

“There were probably 35 people there at the time; I really liked it and had no intention of leaving,” he said, adding that his career took a critical turn a few years later when, while he was home for Thanksgiving, his father, who joined the agency in the early ’60s, commenced a discussion on succession.

“He said, ‘what am I going to do with this business?’ and we continued to talk,” Borawski recalled, adding that, soon thereafter, he came back home to join the company as a salesperson; eventually, he would succeed his father as president in 1992.

By then, he was also working to take a friendship on the golf course with Malek to a much different level. The two were members at what was Hickory Ridge Country Club in Amherst (the club closed a few years ago), and while talking golf and shop — Malek had been in the insurance business for roughly a decade by then — a discussion commenced about Malek coming to the Borawski agency and “helping build something,” Bob said.

That something was the aforementioned commercial-lines division that has grown so dramatically over time.

“We made a lot of cold calls over those years,” said Borawski, adding that, in addition to that time-honored strategy, the business has benefited tremendously from referrals that have led to new customers of all sizes in both the commercial- and personal-lines sides of the business.

Overall, the company has decided to grow organically, not through acquisition, as many others have. Again, as in banking, growing organically means, to a large extent, taking customers from other players, something that’s accomplished through hard work, a strong track record, a deep portfolio of products and services, relationships with carriers (Borawski works with more than 30 of them), and — here comes that phrase again — relationship building.

“Business just doesn’t fly in the door — you’ve got to go find it,” he explained. “You have to hunt it and track it.”

That’s because the competition, as in banking, is fierce. To stand out, an agency has to possess those qualities listed above, said all those we spoke with, and especially a desire to work with clients to find solutions for them, not just get a signature at the bottom of a policy — or series of policies.

“One of the things that we try to do differently is evaluate someone’s insurance program, and not just from the perspective of price,” Malek said. “It’s important to understand what their needs are and what we’re trying to provide for them, rather than just focus on the bottom-line price, because, in most cases, that doesn’t end up working out.

“Insurance is an intangible. You can’t touch or feel it until you need it. And we try to get people to understand just that — that everything is great until something goes wrong. And when it goes wrong, you need to know that you’re going to be put back to where you were prior to that.”

Mark Rosa, senior account executive, agreed, and noted that he and others in similar positions at the company strive to be advisors, not merely salespeople.

“It’s not just a game of show and tell and salesmanship — we want to advise as well,” he noted, adding that business owners who are experts at whatever business sector they have chosen are not necessarily — and not likely to be — experts on the many different insurance and employee-benefit products available today and which ones might be best for their company.

This desire to advise is another strong attribute that has served the company well during this time of consolidation within the industry, said Rosa, adding that, with those mergers and acquisitions, a personal brand of service is generally lost, creating opportunity for those who can still provide it.

“From a new-business standpoint, many people have made up their mind that they want to go somewhere else,” he explained. “It doesn’t take much for a client to figure out that things won’t be the same as they used to be. They figure that out pretty quickly, and that’s when the phone starts to ring.”

While there are certainly many direct comparisons between banking and insurance, there are some important differences as well, Malek explained.

“Insurance is an intangible,” he noted. “You can’t touch or feel it until you need it. And we try to get people to understand just that — that everything is great until something goes wrong. And when it goes wrong, you need to know that you’re going to be put back to where you were prior to that.

“One of the things that we pride ourselves on is that we’re able to give people that sense of comfort to understand that their business is going to run just as if nothing happened,” he went on, adding that not all agencies can successfully provide this level of comfort.

Those that can think independently — in every sense of that phrase — can do it better than others. And that’s what has allowed this company to thrive for almost a century now, and prompt it to look toward the future with no plans to change how it does business.