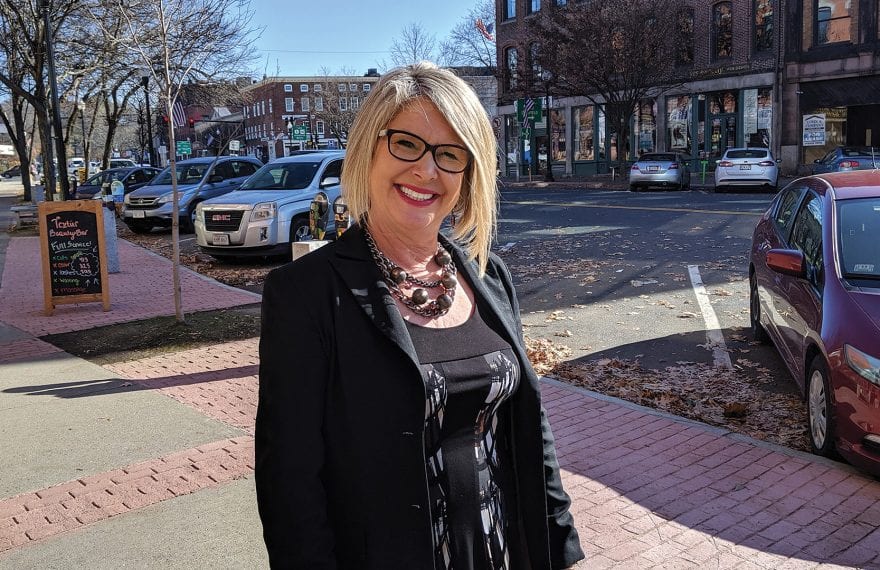 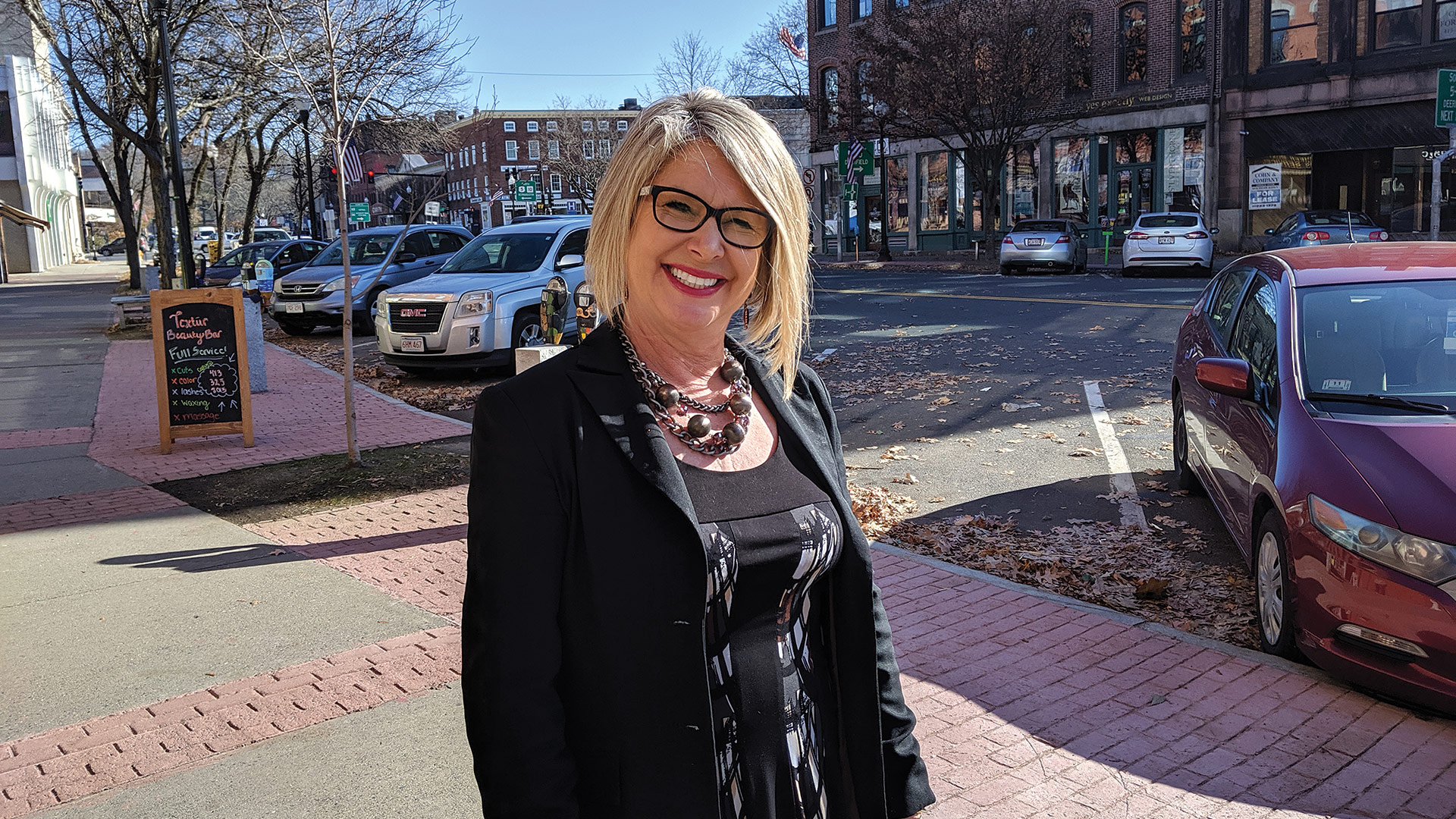 During her decade-long tenure as regional director for Associated Industries of Massachusetts (AIM), Dawn Creighton’s role was basically to support member businesses in the 413.

“I went out and met with member companies, with their executive directors, and they would tell me what their biggest business challenges are, and I would try to find them a solution,” she told BusinessWest. “Sure enough, every single one of them said, ‘Dawn, if you could get me the bodies, I could double my workforce.’ No matter what the industry was, I’d meet with the HR person, and she’d say, ‘oh my God, Dawn, help me find somebody.’”

In those years, she formed connections between companies and resources like the region’s colleges and universities, but she wanted to be more than a connector.

And now she is. In her new position, as chief Workforce Development officer for Greenfield Community College (GCC), she can actually help build the programs that create that worker pipeline — and she’s excited about the possibilities.

“This opportunity became available, and I was like, ‘wait — I actually get to do something about this.’ It’s really exciting.”

Creighton, who works at GCC’s Downtown Center at 270 Main St. in Greenfield, had been on the job only three weeks when she sat down with BusinessWest to share that excitement, although she described her job in vague terms for a reason: at the moment, she’s mostly listening — and learning.

“What’s the purpose of higher education if we’re not building the student for the workforce they’re entering? We get it, and want to be able to do that.”

“My first 30 days have been really meeting with the employees at GCC and what they’re doing in the community. Then I’m spending the next 30 days meeting with the employers in the community, finding out what their needs are to make sure we’re building the programs they need. Then the next 30 days will be spent with our community partners, finding out how we can build programs together,” she explained.

“Once all that comes together, we’ll be figuring out what we’re already doing and doing well, and building new programs,” she went on. “What does that look like? Do we need to add more technology training? What are the needs of the community?”

Creighton is no stranger to GCC — she’s a 2005 graduate of the college who began her career as an employment specialist at MassLive before becoming AIM’s regional director for Western Mass. in 2009. During her tenure at AIM, she served thousands of employer members, uniting them around issues ranging from healthcare and employment law to sustainability, budgeting, and hiring.

In doing so, she developed an understanding of the diverse needs of employers across the region, including manufacturing, but she is also invested in furthering innovation and bolstering the creative economy. Thus, she’s in a good position to help GCC integrate the liberal arts and technical education it offers, said college President Yves Salomon-Fernandez.

“As an alumna, we are especially proud of Dawn’s professional achievements and are delighted that she wants to serve her alma mater and community this way,” Salomon-Fernandez said. “She rose to the top in the search process. There is much anticipation for her to lead us to new heights.”

Among her responsibilities, Creighton oversees the college’s non-credit programs, from manufacturing to personal enrichment — “you’d be amazed how many people are interested in taking ukulele lessons and salsa dancing and tango.”

But when it comes to crafting programs that better train students for fertile career opportunities — thus helping companies grow — “there’s always more potential, and that’s why I’m here,” she said.

“Many, many moons ago, the impression [of community colleges] from the business world was, ‘here’s our student, take it.’ Now the business community has a chance to be the model for the student,” she went on. “What’s the purpose of higher education if we’re not building the student for the workforce they’re entering? We get it, and want to be able to do that.”

The college is currently crafting a strategic plan, seeking input from the community and companies of all types and sizes, to better hone and respond to those workforce needs, she explained. “It’s an exciting time, and the vision for what people want to see from the community college is huge. We’re reaching out to people and asking for their time to help us build the product they need — the student.

“They’re so excited to have their voice heard,” she added. “They’re calling me and telling me what they need, and they want to be a part of it — ‘how can I help?’ It’s this contagious vibe of getting involved. I’ve had people say, ‘if you build this program or do this training, I’ll even send some of my people in to talk about it in a real-world context. I’ll even do apprenticeships; I’ll do internships.’ They’re not interested in a handoff; they want to be hands-on.”

The goal, Creighton noted, is to get those ‘bodies’ in positions of need — actually, not just any bodies, but well-trained individuals — and help companies grow, at the same time establishing Western Mass. as a strong job market, attracting still more talent, which helps companies grow more, and it becomes a snowball effect.

“Every industry has a shortage of people,” she said, but specifically people with essential life skills — what some call soft skills, though she doesn’t like that term. “It sounds fluffy — but it’s real.”

For example, many employees and job seekers simply don’t understand the need to be punctual, or to stay off their smartphone during work hours, or that a 9-to-5 job means actually working 9 to 5. “To some people, it’s common sense; to others, it’s not. It’s just not an environment they’ve been in.”

And while Millennials have gotten a bad rap, this soft-skills gap spans the generations, Creighton said. In fact, in many ways, Millennials are a positive force, forcing companies to rethink old ways of doing business.

“With all this new leadership in the community, it’s just a fun, exciting buzz and vibe in Franklin County.”

She recalled participating on a panel with a banker who told her about a job he had early in his career. He was so savvy with technology, he’d get a day’s work done in five hours, but his boss wouldn’t give him additional duties, as not to show up his co-workers, so once his day’s work was complete, he’d sit at his desk, buried in his phone.

“Everyone looks at him like he’s this slacker,” she said. “He ended up leaving — no surprise there. And how many other people are leaving because they’re underutilized?”

The bottom line is that companies and their employees can learn from each other to help each other succeed, she explained — and that’s another way organizations can grow.

As the former board president of Dress for Success, Creighton also built Foot in the Door, a workforce-readiness program dedicated to helping women develop critical skills for entering and re-entering the workforce. So she’s no stranger to these issues.

And she’s energized by all the new blood in regional leadership. For example, Salomon-Fernandez has been on the job just a year, and so has Diana Szynal, executive director of the Franklin County Chamber of Commerce.

“With all this new leadership in the community, it’s just a fun, exciting buzz and vibe in Franklin County,” Creighton said. “Everyone’s saying, ‘let’s try it this way,’ and nobody’s saying, ‘no, we did that before.’ And we’re working collaboratively together.”

While touring manufacturers and other businesses to determine what they need to grow, she added, it’s important to understand that many tools and programs are already in place. “We just need to package them differently. I’m excited when I hear the things people want and realize we’re already doing it and we could just do it in a more robust way.”

Finally, Creighton wants to celebrate the region’s economic successes while striving to add to them — and make sure GCC has a key role in doing so.