Her Advocacy for Women and Children Has Taken Many Powerful Forms 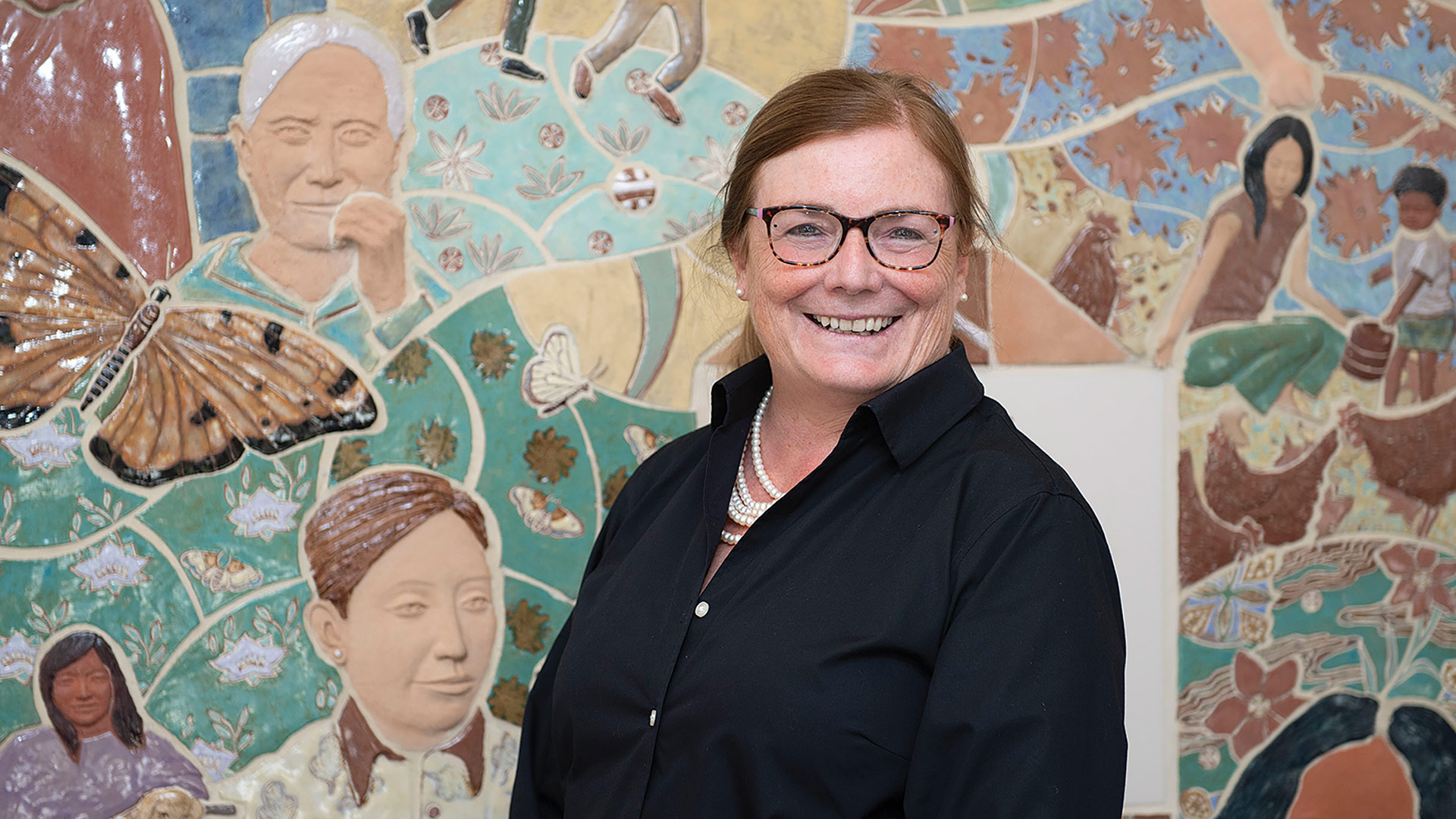 Liz Dineen was always a bit different from her young peers. During the 1960s, when they were listening to the Beatles, the Beach Boys, and the Rolling Stones, she would scour her local library for famous speeches — in print and on vinyl — from the likes of Martin Luther King Jr., Malcolm X, Winston Churchill, and John and Robert Kennedy.

“I was very intrigued by the power of the word to mobilize people into action for good, and to motivate people to change,” she said.

At age 12, watching Bobby Kennedy’s funeral and procession, “I remember saying to my mother and father that day, ‘I want to be a lawyer. I want to make a difference.’ I’ve wanted to be an advocate for women and children my whole life, from when I was 12 years old, and I’ve kind of directed the rest of my life that way.”

Dineen wasn’t interested in criminal law when she entered law school, but an internship in the Hampden County District Attorney’s Office hooked her. So she kept working there, and stayed after graduation — for the next 27 years, in fact.

“I just loved being an advocate, being a trial lawyer and being able to fight in that legal arena for justice for women and children,” she said, specifically on wrenching cases involving physical and sexual child abuse, adult rapes, child murders, and domestic-violence murders.

“I’ve wanted to be an advocate for women and children my whole life, from when I was 12 years old, and I’ve kind of directed the rest of my life that way.”

“Liz Dineen was the epitome of a caring, supportive, and compassionate champion for those victims,” said attorney Stephen Spelman, who met her while working with her in the DA’s office in the 1990s, and later married her. “She was a zealous advocate in the courtroom, renowned throughout the state, and the nation, for getting decades-long sentences on those who had sexually assaulted children and women, or brutally harmed them physically.”

Always thinking innovatively, she also began a series of lectures and meetings among various professional groups (nurses, doctors, law enforcement, and prosecutors) to ensure, while women and children were receiving medical care after being assaulted, that crucial items of evidence were not tossed out or ignored. “These meetings not only improved the collection of evidence for trial, but also improved the medical care of the victims, particularly in sexual-assault cases,” Spelman said.

It was critical, deeply gratifying work, but after 27 years, Dineen felt it was time to step away. She had been teaching law in an adjunct capacity at Elms College and Bay Path University, and when an opportunity arose to chair Bay Path’s Criminal Justice department, she pursued and landed that role in 2009. 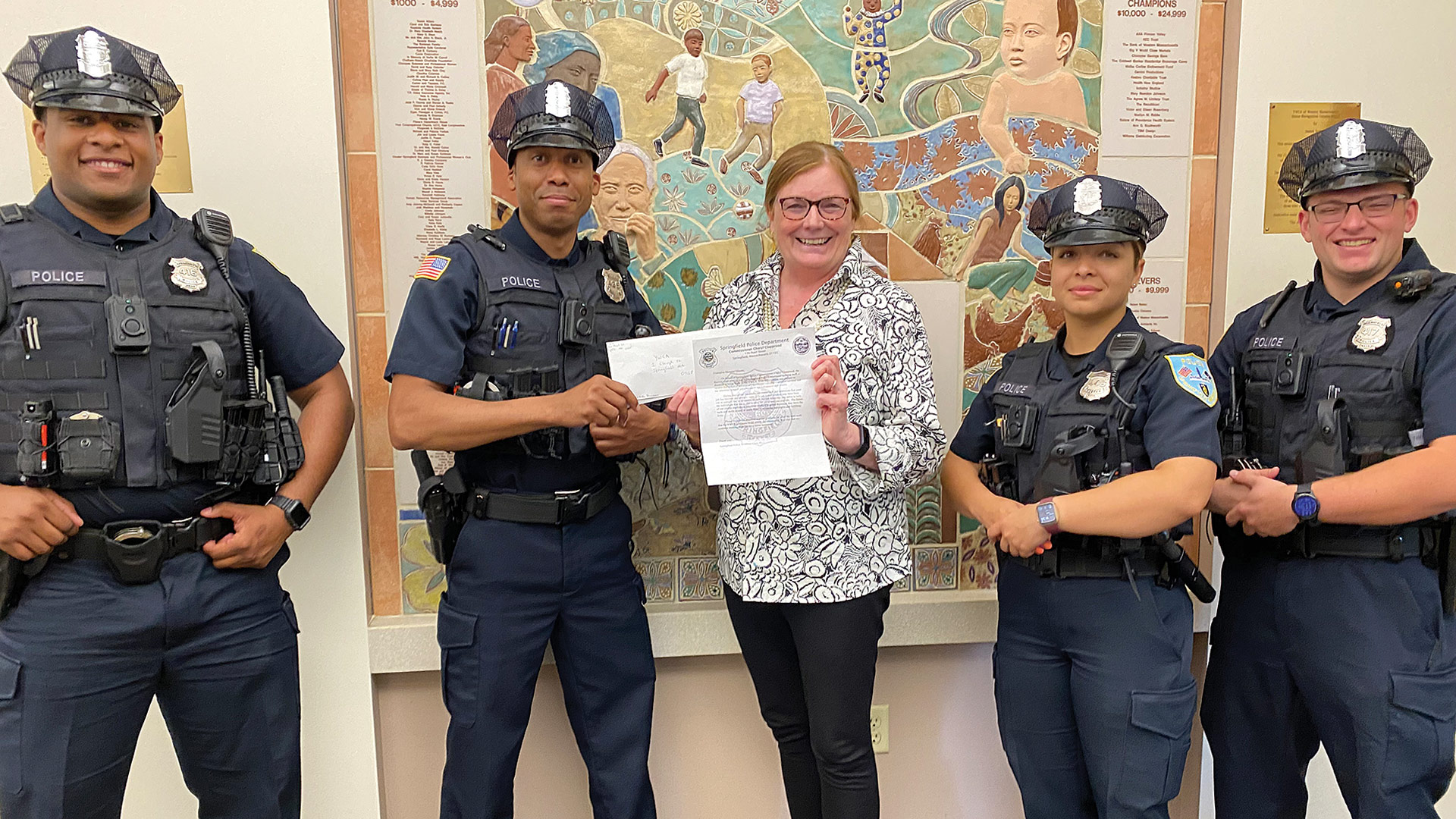 Liz Dineen with the most recent Springfield Police Academy class, which made a donation to the YWCA’s programs.

“I reinvented the department,” she said, “with a strong emphasis on developing women leaders within the criminal-justice arena.”

But in 2015, it was time to shift gears again, and this time, for the first time in her adult life, she took six months off to really think about the future. “I wasn’t sure what I wanted to do next, and I knew I was too young to retire,” she said, so she asked people who knew her well what they envisioned for her. “The answer that kept coming back was to go for a judgeship.”

So, with encouragement from judges and others she had interacted with, she applied for a Superior Court judgeship in December 2015. But then something unexpected happened — something that would completely alter Dineen’s life and career, but made perfect sense along her journey as a Woman of Impact.

It was the YWCA of Western Massachusetts, which was looking for an interim executive director, and reached out to ask if she would consider the role.

Coincidentally, Dineen had just finished reading Year of Yes, a book by TV production powerhouse Shonda Rimes. “The whole message was, ‘don’t be afraid to say yes, even if you’re not 100% qualified,’” she said. “Men will say ‘sure,’ while women make sure every ‘T’ is crossed and every ‘I’ is dotted. So I said, ‘sure — I will throw my hat in that arena.’”

Two weeks later, she was on the job — with no nonprofit experience, but plenty of exposure to some of the Y’s programmatic issues, like domestic violence and sexual assault. “It was a real learning curve in terms of how nonprofits work, how to go about maintaining the funding we already have, obtaining new funding, and seeking new opportunities to expand.”

In March, just a few months into the job, the state’s Judicial Nominating Committee contacted Dineen, wanting to interview her for that judgeship. When she told the executive committee of the YWCA board, they didn’t want to lose a good thing — and offered her the CEO position permanently. She said she’d need some time to think about it.

“But the more I thought about it, the more I thought, ‘if I take this position, I can be proactive. If I’m on a bench, I have to be reactive, meaning I have to wait for cases to come to me.’ And you can’t be political at all if you’re a judge. You have to be very selective in terms of who you’re associating with so you avoid any appearance of impropriety or preference. So I said, ‘OK, let’s try it. Let’s stay here and see what happens.’”

“Everyone realized, when the pandemic hit, that this community would need us now more than ever, and people just really stepped up. I’m proud that we could keep offering those services. We didn’t let the community down.”

Besides growing the organization from 70 employees to 150 in just five and a half years, she has developed and expanded a number of programs, all with the YWCA’s mission — to eliminate racism, empower women, and promote social justice — in mind.

Programs take a forward-looking approach to immediate crises. For example, the Children Who Witness Violence program provides therapy to kids (ages 3 to 17) who have witnessed or experienced domestic violence. “We’re trying to change the paradigm so they don’t replicate what they saw — so we can change generations going forward.”

Meanwhile, a financial-empowerment program considers that the vast majority of victims of physical domestic violence are also victims of financial abuse. This fiscal-education program dovetails with the YWCA’s workforce-development programs in that they aim to cultivate independence for women down the road, and they are also open to the public, not just to those who enter through the Y’s crisis services.

The YWCA also visits college campuses to talk about domestic violence and sexual assault, both counseling students and teaching about awareness and intervention in the classrooms, with an eye toward preventing those crisis situations to begin with.

Back on her own campus, Dineen finds satisfaction in seeing troubled lives change.

“I go into the shelter every day — it fuels me,” she said. “I particularly like to see the kids because the kids in the shelter are really happy. That surprised me, but it’s a little like camp — they’re around other kids — and they’re happy because they’re safe and they know their mom’s safe. You see a transformation within 24 hours; they come alive again.

“I can’t even imagine being a kid and seeing my mother get abused like that,” she went on. “Especially the little boys — you can see they’re very, very protective of their mothers. Some of them have said to me they feel bad they didn’t protect their mom. And I just keep saying, ‘you’re just a kid; it’s not your job. Your job is to do well in school and then go outside and play and scream and yell.’”

While the pandemic threw the social-service world into disarray, Dineen said she’s proud that all YWCA programs continued — many virtually, but some in person, including the domestic-violence shelter, two teen residential programs, and the supportive-housing program — “and we kept COVID out the entire time, which was a miracle.”

At the same time, many needs became more urgent. “So many women were looking for help, saying, ‘I’m trapped at home with my abuser. How can I get out, how can you help me?’”

The YWCA raised large amounts of money during that time, as individuals and organizations recognized those needs — including the Community Foundation of Western Massachusetts, which awarded $200,000, some of which was used to place women in hotels because the shelter was full.

“I’m so proud of my staff and my board of directors,” Dineen said. “Everyone realized, when the pandemic hit, that this community would need us now more than ever, and people just really stepped up. I’m proud that we could keep offering those services. We didn’t let the community down.”

Throughout all of that, she’s never forgotten the legacy she’s forged, of empowering women — some in crisis, some learning from her, some working beside her — to move forward in their own lives. “The thing that gives me the most joy and causes this 65-year-old Irish Catholic girl, who never cried before, to actually cry is seeing another woman succeed.”

That goes for the women of color who direct the YWCA’s programs, and are encouraged to continually advance their education and training.

“I keep saying to them, ‘you are the future leaders of nonprofits of Western Mass. I want to be 80 years old, reading in the newspaper that you just got made a director or CEO of some organization.”

A four-decade career spent not only standing up for women, but helping them become advocates for others — that’s a real Woman of Impact.