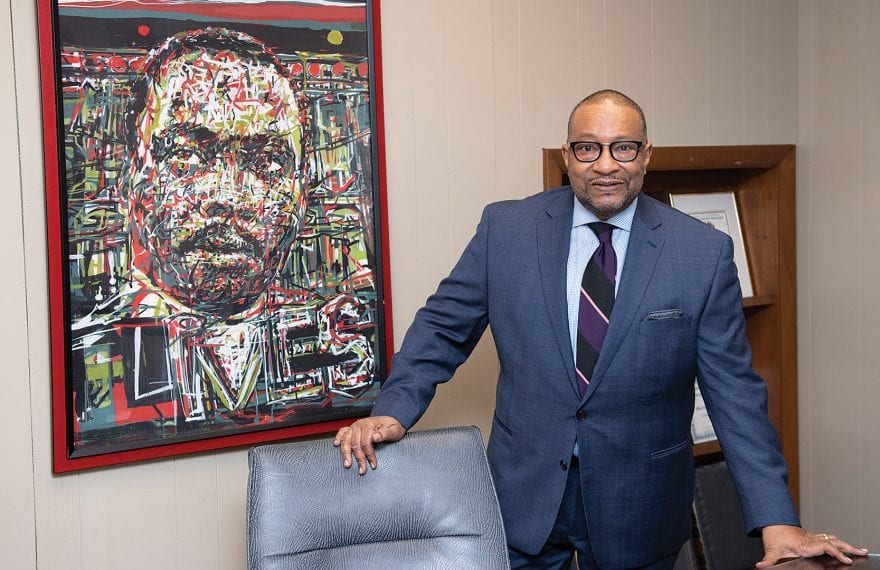 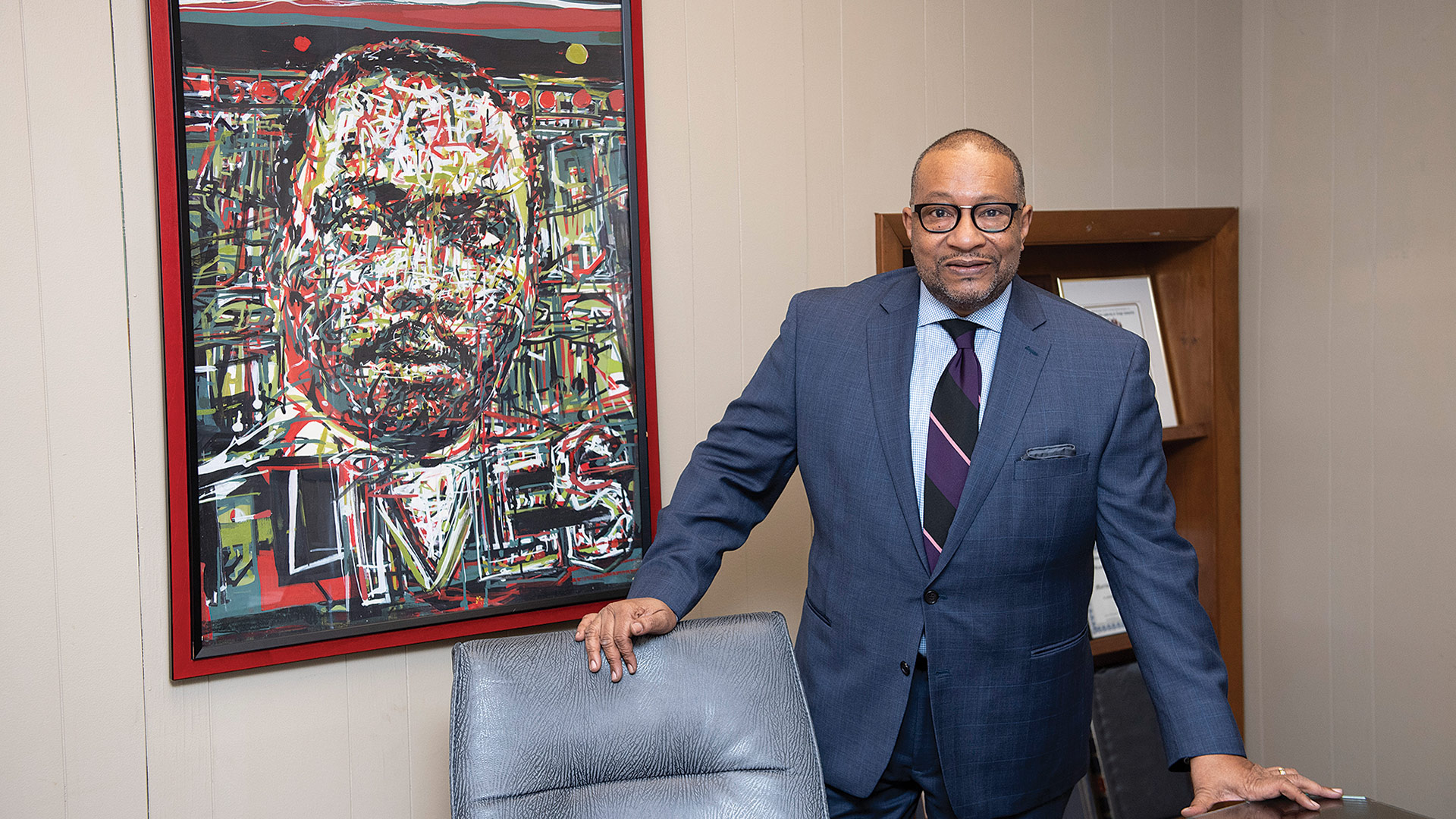 Back in the mid-’70s, Ronn Johnson recalls, he’d walk past a nondescript house on Wilbraham Road in Springfield, a few blocks down the road from both his home and his school. Sometimes he’d sit in the front room of that house, waiting for a dental appointment. In the neighboring Presbyterian church, a young, dynamic pastor, the Rev. Ronald Peters, had recently taken over a decidedly dwindling flock.

“I never thought this was a place I’d ever have a connection to,” Johnson told BusinessWest. “But I do believe that God has a plan for every one of us. I’m a very faith-driven person. I’ve been blessed to be in places where people see my interests and read my heart, and where I’m able to make some things happen.”

Today, he makes them happen in that same house. The dental office long gone, it now serves as the administrative center of Martin Luther King Jr. Family Services Inc., where he’s been president and CEO for the past seven-plus years.

The neighborhood has changed much over the past half-century. Peters, who rebuilt that church by attracting kids and teenagers and then their parents, restored the church to vibrancy and oversaw the construction of the community center that became MLK Family Services.

Meanwhile, Johnson has spent much of the past four decades making a real difference for children and families in the community.

He’s done that through a variety of roles, all of which blended business acumen with a heart for service. He’s also done it through the Brianna Fund, a charity named after his daughter that has, over the past 22 years, helped children with disabilities access the tools and resources they need to achieve a better life (more on that later).

“I do what I do because I have a passion for making a difference for people,” Johnson said. “It’s that simple. And I’ve been fortunate enough where I’ve been able to make a career around doing that. So I feel I’m doubly blessed to have made a good life for myself, but in the context of being a professional helper.

“I do what I do because I have a passion for making a difference for people. It’s that simple.”

“It’s made my life more complete, more purposeful — not just crunching numbers for folks to get rich, but working on the side of creating opportunities that help corporations make good decisions about how to invest in our community and invest in people,” he went on. “And meeting the most basic needs people can have — food, sustenance, shelter, education — that’s very much what we’re about here.”

It’s a winding story with many stops, each of them worth visiting to understand why Ronn Johnson is a true Difference Maker — one whose influence will continue to resonate in the decades to come.

Johnson’s family moved from Georgia to New England during the 1950s, part of the great African-American migration from the South in search of better economic opportunities, and he grew up along that stretch of Wilbraham Road.

“I’m a Springfield person. My formative years were right here,” he recalled. “I was part of a very caring community, as were most neighborhoods during that time. It wasn’t until later that we became so disparate and not as connected to our neighbors as we used to be. That laid the foundation for me to become very relationship-oriented. That has served me well.”

Indeed, each stop in his long career has been marked by building relationships between various entities — businesses, schools, social-service agencies, government — in the service of helping individuals and improving communities. “It’s not what I’ve done that’s so great, but other folks have sown seeds and shared a vision, and collectively we’ve come together to make it happen.”

He might have never made a career in Springfield had he followed through with an acceptance to Morehouse College in Atlanta. But when his father was diagnosed with terminal cancer, he decided to stay home with his mother and sisters, and attended Western New England College instead. “And I have no regrets,” he noted.

That’s due to the remarkable journey of service that followed. After graduating from WNEC, he was recruited to the W.W. Johnson Life Center, an organization that dealt in mental-health issues, and earned a master’s degree in counseling psychology from Cambridge College.

His next stop was the Dunbar Community Center, where he was involved in grant writing in an effort to meet the needs of an “underfunded community,” as he called it. “Poverty was at the core of what so many people were living with on a daily basis.”

His next role was vice president of Child and Family Services at the Center for Human Development (CHD), where he worked for 13 years — giving him a larger platform, a much broader range of financial supports, and a specific mandate. 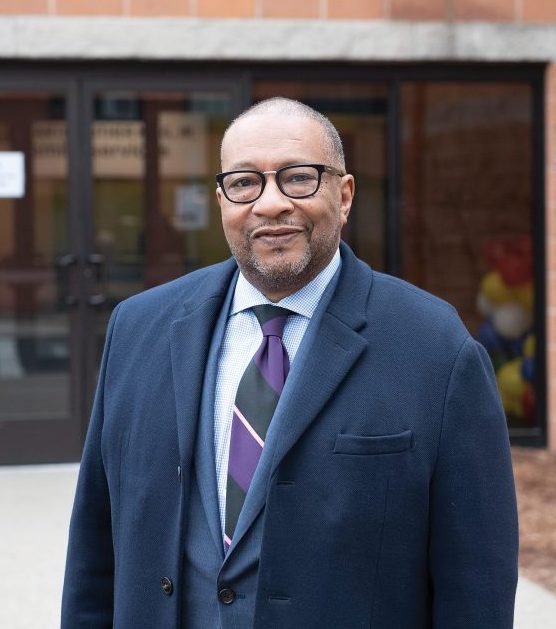 “Leadership at the time wanted to make a stronger connection to community,” he recalled. “Yes, was important to do closed-referral programs, but we were getting referrals because of the dysfunction that existed in the communities, the poverty that was happening.”

Gang violence was also on the rise during the early part of the 1990s, and it was creeping into local schools, so he created a CHD program called the Citywide Violence Prevention Task Force.

“We had no contract for violence-prevention work, but we committed some resources to make some changes,” he said, adding that police, faith-based organizations, youth-serving agencies, concerned citizens, and businesses all wanted to be a part, as did college students who helped with marketing strategies and research projects.

“I got really tuned in to how to address violence from a public-health perspective because people don’t think about kids being shot in the street as a public-health issue — but, my goodness, for urban youth, it’s the number-one killer. Cancer is big, diabetes is big, but if you’re a young person in a certain urban environment, you’re more likely to be killed by violence.”

Part of that initiative was a street-outreach program that drew young people to environments where they could feel better about their lives, draw on community resources, and develop aspirations for a healthier future. That plan, dating back two decades, was recently used to write a proposal to fund a similar street-worker program, and the Department of Public Health issued grants to several organizations to launch it this year — including MLK Family Services.

“That made me feel old,” Johnson said with a laugh. “This thing has come full circle. I couldn’t have designed it that way.”

Before his current role, however, Johnson had one more notable stop, as director of Community Responsibility at MassMutual.

“I moved from the micro side and case work to being a social worker in the macro context, setting policy and strategy around a corporation’s giving of millions of dollars to the community. It was a cultural difference, but I was happy. I got to spread my wings and be a positive contributor and see that these things we were funding were making a difference with people, and that they were measurable.”

He worked there for almost six years, until the economic downturn in 2009 forced cutbacks at many companies, and he was laid off. But he had no regrets, and he took advantage of relationships he had built in the worlds of higher education, healthcare, and other sectors and launched a consulting firm, RDJ Associates.

One of his clients was MLK Family Services, which approached him, during the summer of 2012, with an offer to take over leadership of the venerable but financially struggling agency. When he came on board, the first goal was simply to make payroll, but eventually he righted the ship — with the help of a business community that saw the organization’s value and quietly helped raise a half-million dollars.

“It was stressful, but I was committed. And I had a committed board of directors who hung in there and facilitated the change that needed to happen,” he said. “We regained credibility with funders. That was big.”

“It’s made my life more complete, more purposeful — not just crunching numbers for folks to get rich, but working on the side of creating opportunities that help corporations make good decisions about how to invest in our community and invest in people.”

Importantly, at MassMutual, he had learned the value of measurable results, and he’s been able to demonstrate that the agency’s programs — from helping people access healthier food to a College Readiness Academy that gives students tutorial help while bringing them to college campuses to raise their educational aspirations — do make a difference.

But no effort has been more personal to Johnson than the Brianna Fund, named for his daughter, who was born into the world with multiple broken bones from the brittle-bone condition known as osteogenesis imperfecta. Over the years, she would fracture dozens more. The family decided they needed an accessible van to keep Brianna in her wheelchair while moving from place to place, so they started a fundraiser.

“The community got behind us so significantly that we over-fundraised by about $30,000,” he recalled. “That was a message from God. I said all along that I didn’t want to do this if we’re not in it for the long haul. This needed to be ongoing, in perpetuity, for children in our community.”

Twenty-two years later, the Brianna Fund has raised more than $750,000 and helped 50 children. “Sometimes it’s advocacy, but in 90% of the situations, it’s to purchase a vehicle, renovate a home, widen hallways, install ramps,” he noted. The 50th recipient, Omer DeJesus, will use the funds to bring home a service dog.

The Brianna Fund also honors the memory of Martin Luther King Jr. each January with a benefit gospel concert, drawing thousands of attendees to the MassMutual Center.

“This is a ministry for me and my wife, something we do together that has a lot of benefit for folks,” Johnson said. “For us, it’s a gratifying experience to give something to folks that we know is going to move their life forward.”

These days, Johnson’s son, Ron, works as an attorney at Yale New Haven Hospital, while Brianna is living in a city she loves, Washington, D.C., working for an agency focused on issues that affect poor people, especially women. Often, someone will tell Johnson he saw Brianna wheeling around the capital, enjoying a life of service no doubt partly inspired by her difference-making dad.

He comes back repeatedly to the fact that he can’t do any of it alone. To serve 750 different people each week with after-school programs, college courses, family support, public-health outreach, sports programs, cultural activities, and more — with only about $1.6 million in annual funding — he relies not only on his team, but 114 active volunteers. “We could never do that kind of volume without the important role volunteers play.”

Still, he added, “small not-for-profits are under siege in this state and across the country,” because large funders want to give bigger contracts to fewer agencies, those with a broader infrastructure than MLK Family Services has. “In the meantime, those agencies who have the best relationships with the consumers on the ground, we get squeezed out of the game. So we need the support of our home communities and the business owners.”

In short, the challenge never ends. And Ronn Johnson, a man with a heart for the City of Homes, who works within shouting distance of his own childhood home, will keep working to meet his community’s needs.

After all, he’s a Springfield person.