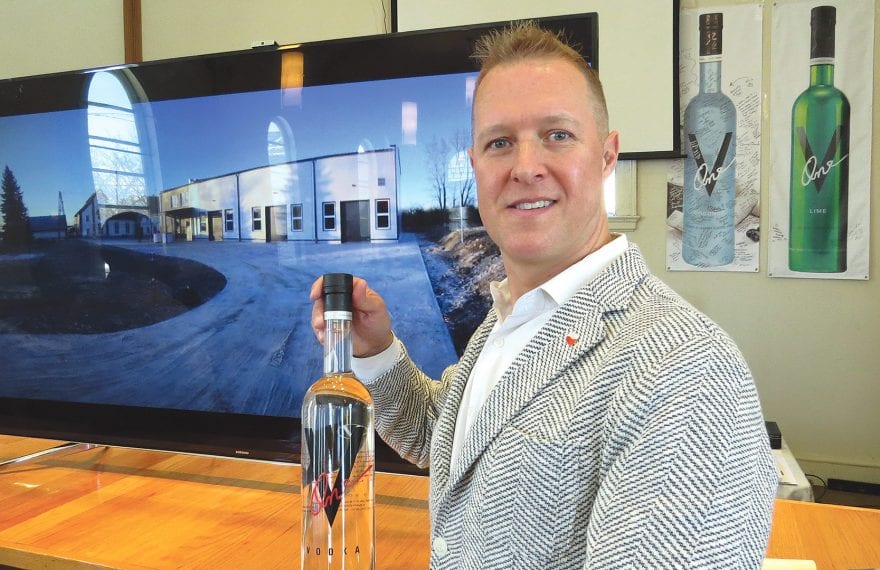 The Spirit Moved Him 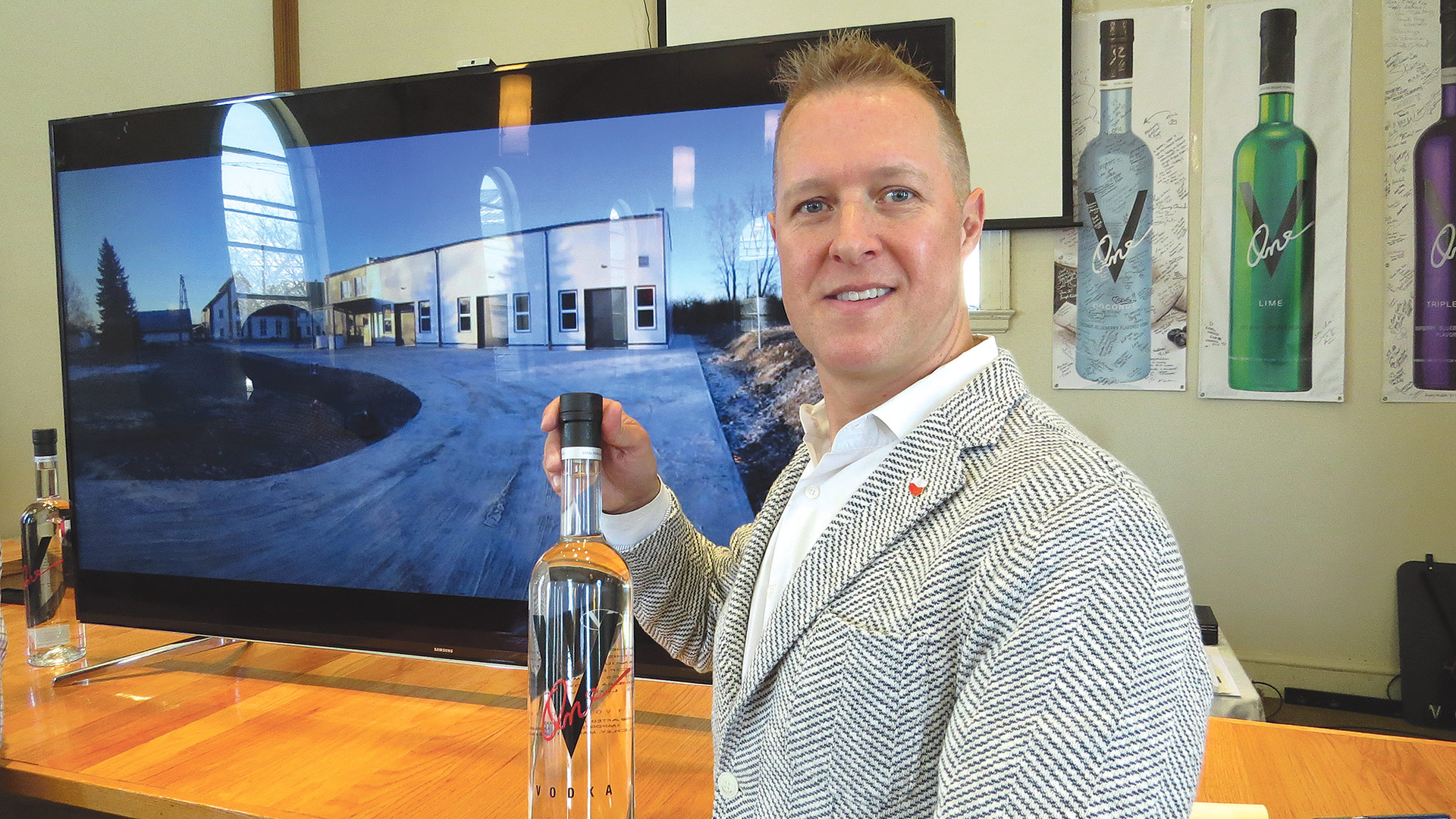 Paul Kozub stands in front of picture of his new distillery in Poland.

Almost from the day he started V-One Vodka, Paul Kozub has been dreaming about, and planning for, the day when he’d make his product himself, at a distillery he owned in Poland, the birthplace of his ancestors — and vodka itself. Now, that day is here, and Kozub believes this huge investment will enable him to scale up his venture on a dramatic level.

Paul Kozub says the hardest part about the whole thing was keeping it a secret.

And that’s saying something, because there were many hard parts to his ambitious plans to building his own distillery to produce the Vodka label, V-One, that he brought the marketplace nearly a decade ago.

There was the process of finding a location in Poland, birthplace of both his ancestors and vodka itself, or so the story goes, as well as designing a facility and getting it built. And none of that could happen unless he sold enough shares of his company to raise the needed capital — but not so many shares that he would lose majority ownership of the venture.

But the keeping-it-all-a-secret part? That was quite necessary because, if word ever got out to those who had been producing his vodka since he launched his label that he was going into that end of the business himself, then they would stop producing it for him posthaste and leave him scrambling to not only fill orders but find someone else to make it in the interim.

So Kozub went to great lengths to keep his search and then his building project a secret. And, as he said, it wasn’t easy.

“My family and friends knew, but I had to really keep things quiet otherwise,” he explained at a short press conference on Feb. 26 to announce the purchase and expansion of a distillery in Kamien, Poland, about two hours southeast of Warsaw. “Every time I went to Poland, I wouldn’t post it on Facebook, because my suppliers are friends of mine and they’d see that I’m there [Kamien] and not coming to see them, so they’d know something was going on.”

As noted, he said this at a press conference, which means this huge development for the company is no longer a secret. Kozub told those friends who were producing his product (the operative word there is ‘were’) about it a few weeks ago, and he said they quite happy for him. At the Feb. 26 press conference, he told several media outlets, supporters, clients such as MGM Springfield, area bars and restaurants, and more. 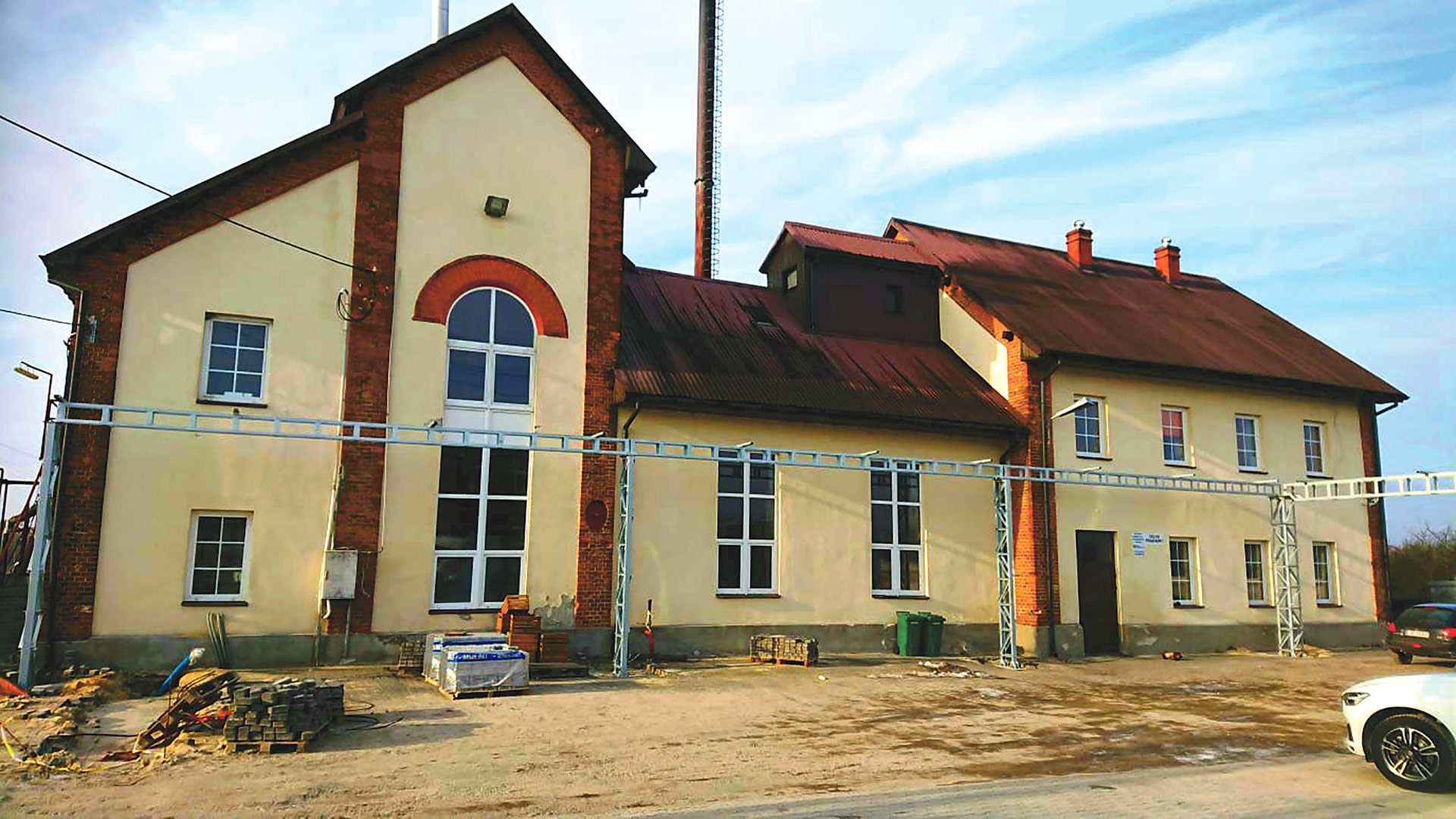 The distillery in Kanien, Poland has a long history, and V-One Vodka will be writing an intriguing new chapter.

It was an emotional announcement and an intriguing new chapter in the V-One story, which started back in 2003, when Kozub started distilling in his home in Hadley after using a $6,000 inheritance from his “Polish moonshining grandfather” to buy some equipment. There have been a number of milestones along the way, from the creation of his signature bottle to expansion into different markets; from the addition of several new flavors to Kozub’s being named BusinessWest’s Top Entrepreneur for 2016 (in recognition of all of the above).

The distillery, which he describes as a “multi-million-dollar investment,” without being more specific, represents the next milestone and one Kozub believes will greatly accelerate growth of the company.

“This will allow us to produce 400 times more vodka than we produce today; we will be looking to not only expand as a national brand, but as an international brand,” he explained. “This represents the next stage of the company — and a very exciting stage.”

Elaborating, he said he doesn’t have a firm timetable, obviously, but expects to expand outside of New England and down the East Coast in the years to come, and will then look to expand globally.

For now, though, he’s focused on getting the first bottle off the line in Kamien, something that should happen on or around April 1.

For this issue, BusinessWest looks at everything that has brought Kozub to that moment and at what will likely happen next.

As he announced his expansion into Poland — a return to his family’s roots, if you will — Kozub did so with a type of high-tech slideshow. Only it started with a few low-tech pictures that captured some of those milestones described earlier.

One was of his first house in Hadley, a small Cape that he moved into just a few days after his Polish grandfather died, and another captured its basement, where he first started making vodka, or “moonshine,” as he called it. A third zoomed in on the special plumbing that enabled cold water to run through the still, a development that made everything that’s happened since possible.

Other pictures captured his first V-One bottle and his first van, which he purchased soon after going into business. He would load it with 100 cases of V-One and deliver it to clients across the region himself. 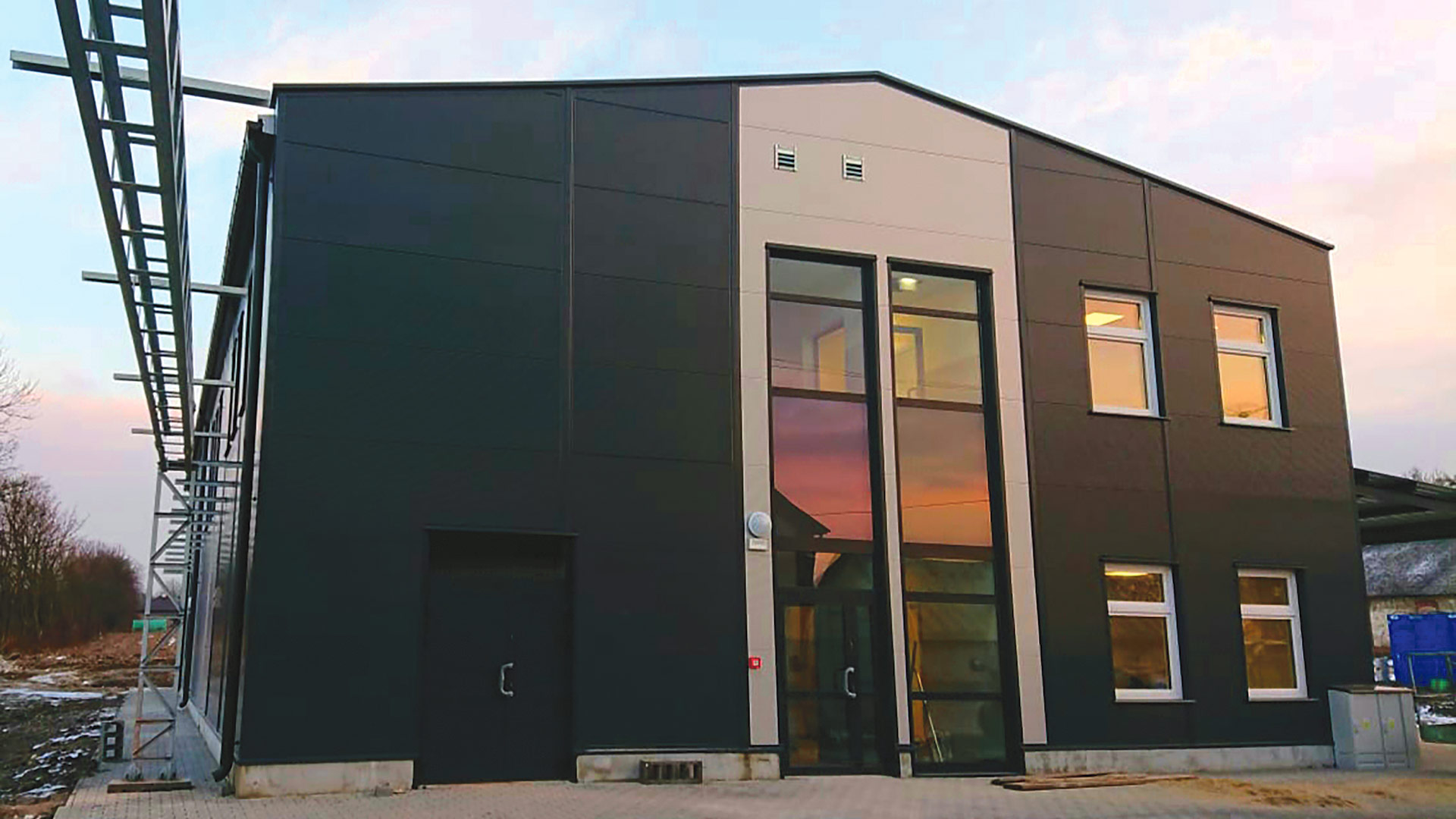 The addition built onto the distillery brings all aspects of the business together in one place — from production to bottling to warehousing.

Yes, that’s a lot of firsts. But to take the venture forward in a meaningful way, Kozub said he needed to control production of his vodka with his own distillery. He said he’s known this almost from the beginning, but the costs of such a facility have been imposing and, until recently, prohibitive.

But knowing he needed to take this step, he raised capital by taking on additional investors as part of a process that really began a few years ago. Subsequent steps included scouting locations and kicking the tires on existing distilleries available for acquisition.

With that explanation, his show shifted to video captured by his phone as he traveled through the community he eventually chose to be home to his distillery.

“There’s thousands and thousands of acres of fruit trees here … it reminds me a lot of Hadley,” he said as the car transporting him moved down a rural road. “As soon as I saw this, I knew it was the place I wanted to call home.”

Home, meaning the actual distillery itself, has been around for more than 133 years, and thus it has some history, said Kozub, noting that, during World War II, the Nazis took it over and produced different kinds of spirits.

The next chapter in its history involves a sizable expansion necessary for producing V-One in the quantities that Kozub is envisioning for the years and perhaps decades to come. Indeed, the facility will include, in addition to the distilling equipment, laboratory space (mostly for R&D and new product development), a bottling area, and warehouse space.

Thus, when asked what this ambitious move does for the company, Kozub said quickly, “it makes everything better.” Elaborating, he said that, almost from the beginning, he has understood the critical need to have more control over every aspect of the V-One operation, especially production.

Beyond control, Kozub said this expansion into Poland and the opening of his own distillery allows him to accelerate the process of growing the V-One label and taking it into new markets — in this country and then eventually abroad.

“I really never wanted to make rum or tequila or gin, but I have at least two dozen other vodka products I’d like to make someday,” he told those assembled at V-One world headquarters (a converted church) on Route 9 in Hadley. “And this allows us to be really innovative with doing some of that stuff; when someone else is making your vodka, you’re limited to their schedule and their timeframe.”

Moving forward, Kozub said that, while he did a sell an interest in the company — something he could do only after its raising its value over the past decade through new products and a wider reach market-wise — he is still the overwhelming majority owner, and still one who is quite hands-on and involved in all aspects of the business. That said, he still plans to spend the vast majority of his time in this country, and probably visit Poland about as much as he does now — maybe once a quarter.

While leaving actual production in the hands of a manager in Poland, Kozub will focus on the proverbial big picture and, more specifically, territorial expansion for V-One and a scaling up of the operation.

And having his own distillery, as he said, will certainly help in this regard.

“People comment to me all the time … ‘you’re a 13-and-a-half-year-old business; how come you haven’t gotten out of the New England market?’” he told BusinessWest. “I’ve had some serious production problems and packaging issues that have worried me about getting into Florida or Texas or California, three of the biggest vodka markets. This [distillery] will really allow us to scale up and tackle those challenges.”

Expanding within the U.S. and then overseas markets will obviously require more capital, he added, and he plans to sell additional shares in the business within the next year.

As he continued his slideshow presentation before the press and his supporters, Kozub placed a map of Poland on the screen to show exactly where his distillery will be located.

He did so to offer a point of reference, offer up a short lesson on Polish geography, and also show where his ancestors are from — a small town not far Krakow. But he also did it to be a touch poetic.
“This really helps put on us on the map,” he said of the distillery, using that phrase to say a great deal.

This venture is now on the map, literally, and its product will be on — meaning available to — a much larger chunk of the map in the years to come because of what this facility will enable the company to do.