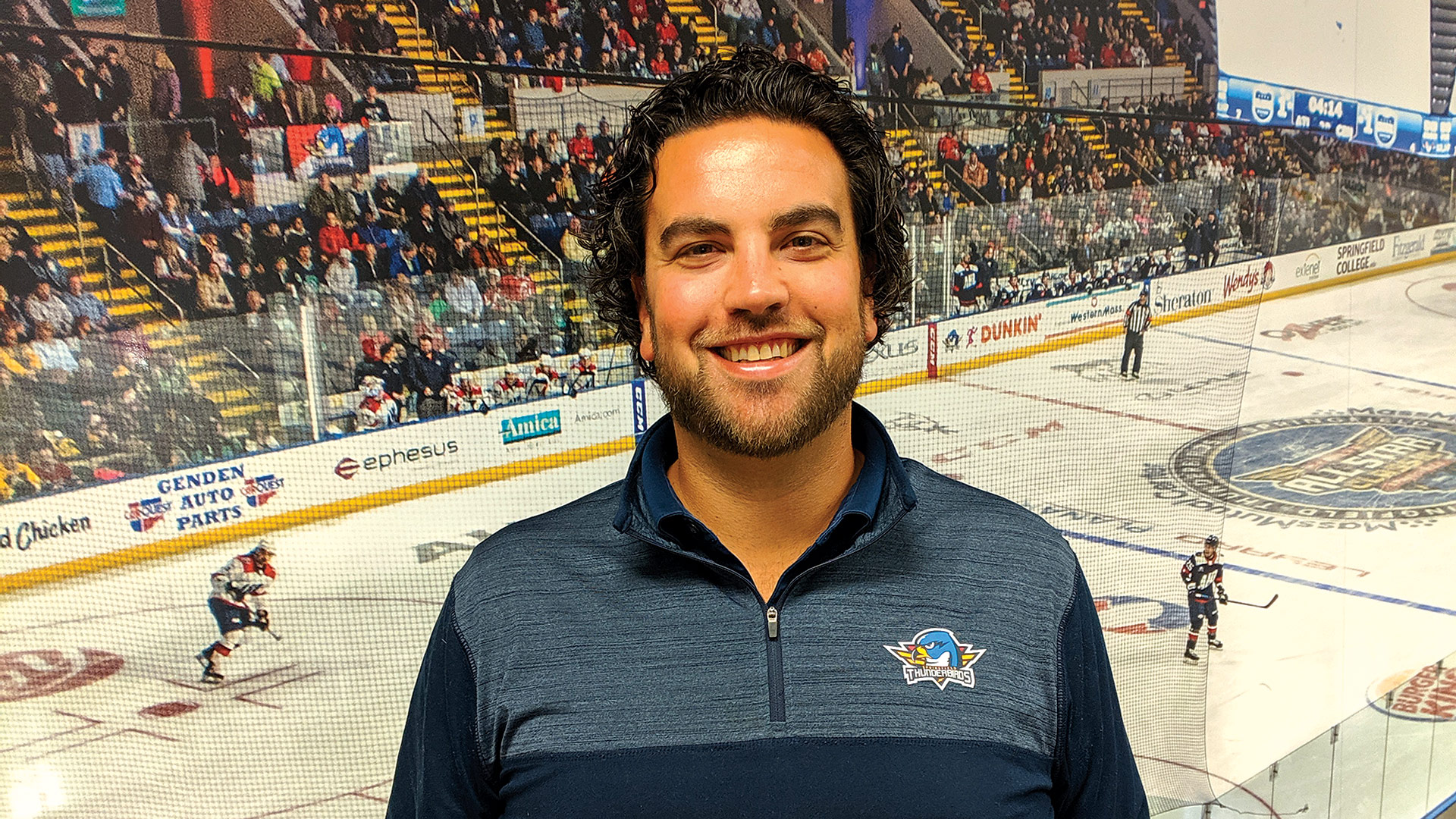 When the Springfield Thunderbirds hit the ice for the first time three years ago, its management team heard plenty of skepticism about whether hockey could truly thrive and grow beyond a certain ceiling in the city. While there’s still plenty of room for growth in ticket sales, attendance surged last season to a two-decade high, with Saturday nights in particular routinely selling out. In short, there’s a lot of optimism inside the Thunderbirds offices — and a refusal to get complacent.

If Springfield is in the midst of a renaissance, Nathan Costa says, the Springfield Thunderbirds are a large part of the reason — even if not everyone thought they could be.

“I told the staff recently, ‘I think we’ve been able to do this because we came in with a chip on our shoulder.’ We wanted to prove we could do it here and that, if we did it the right way, it could work,” said Costa, the team’s president. “When we first came in, a lot of people said, ‘teams haven’t always had success here — what’s different about you guys?’”

At the start of their fourth season in Springfield, the Thunderbirds — the American Hockey League (AHL) affiliate of the Florida Panthers — have slowly raised what was, in some eyes, a low bar when Costa and a team of local investors brought hockey back to Springfield in 2016 following the departure of the Falcons.

Perhaps most strikingly, the team averaged more than 5,000 fans per night last season — a number no Springfield hockey team had achieved in more than two decades.

“At first, there were low expectations for the marketplace, and it was easier to meet those expectations,” Costa told BusinessWest two weeks before the team begins its 2019-20 home campaign on Oct. 5. “Now we’ve set a high bar. We need to work with the same urgency we’ve always had to keep this moving forward.” This year’s squad hits the ice for a practice session last week.

Above Costa’s office door is painted the number 6,793. That’s the sellout number at the MassMutual Center, and it’s a number the team reached on about a dozen occasions last season, mostly Saturday nights. With a friendlier home schedule this year (more on that in a bit), the goal is to record even more sellouts and get that average attendance closer to 6,000 than 5,000 — and Costa thinks it’s reachable.

“In the past, you could always walk up and buy a ticket here. Now, if you don’t get a package, or you don’t get a ticket early on, especially for those Saturday nights in the second half of the season, you can’t find a ticket. And that’s what we wanted to create,” he said. “But it’s not easy to do.”

Last year, preparations to host the AHL All-Star Classic (a significant feather in the franchise’s cap) knocked out home games the weekend before, traditionally one of the league’s busier weekends, cutting down the total number of weekend dates. But for the 2019-20 season, the Thunderbirds will host 15 Saturday-night and 14 Friday-night tilts, as well as four Sunday-afternoon games, in all accounting for 33 of the schedule’s 38 home games.

“At first, there were low expectations for the marketplace, and it was easier to meet those expectations. Now we’ve set a high bar. We need to work with the same urgency we’ve always had to keep this moving forward.”

Still, “we’re continuing to put an emphasis on getting to the point where we’re filling the building every single night,” Costa said, adding that season-ticket sales have increased every year. So have the team’s fortunes on the ice, as it posted a winning record last year, although it has missed the playoffs all three years.

“The Panthers had quite a few injuries, so they called up a number of our players around the all-star break, which was challenging on the hockey side,” he explained. “But on the business side, we continue to do what we’ve talked about from the very beginning, which is focus on the family-fun, entertainment aspects of coming to games.

“People want to see a winning product, obviously — especially in this market, where people are spoiled with winning teams,” he went on. “So we’re hoping that comes with time. But we’re also trying to lay a foundation where we’re providing a professional, awesome experience here in the arena, and I think we’re doing that and creating events and promotions people are connecting with.”

From the start, Costa and his team tackled some common gripes from the Falcons’ tenure, including lowering concession prices, negotiating a deal for free parking in the neighboring garage, building a richer schedule of promotions — even ramping up video production to make sure season-ticket holders are watching fresh videos on the big screens as the season moves along.

Being granted last year’s all-star events was a signal, he said, that the AHL recognized what was happening and how fans were responding. So were a series of league awards last year, from Costa being named outstanding executive to honors for the team’s digital-media presence and marketing efforts.

“The All-Star Classic was an absolute home run — it raised our profile locally and within the AHL,” Costa said. “Springfield wasn’t necessarily viewed as a place where you could see best practices or have a full building, but now, we’ve changed the perception of Western Mass. among the AHL board and really rejuvenated the city from their perspective.”

And the perspective of others as well — about 5,000 a night.

When the Portland Pirates left Maine for Springfield three years ago, the City of Homes was no doubt on the rise, but pieces were still falling into place downtown, and the MGM Springfield casino was still more than two years from opening.

“That was a challenge, when there wasn’t as much life and things going on,” Costa said. “We really wanted to face a lot of the hurdles that we heard about head-on, much of which was parking, safety, or that it costs too much to come to a game. We were trying to bring people downtown.”

Some of those concerns were more reputation than reality, he added. “I’ve worked downtown more than 10 years, and I’ve never not felt safe. And I think that perception is gone now. We don’t hear it at all anymore. It is a testament to the city.”

Part of that change is the simple fact of more feet on the street, especially at night.

“There’s a lot more going on. Restaurants are buzzing. People are walking around. There’s life, there’s energy. The city was primed for that,” he said, crediting entities like MGM and the Springfield Business Improvement District and efforts in the realms of public safety and downtown beautification.

Still, selling a new team to the public after the Falcons took flight was a challenge initially. “But we were confident in our business plan and stuck to what worked in other AHL cities; we stuck to providing value to ticket holders and in the arena. The league started feeling good about us, and it’s steadily grown over three years.”

The franchise is always feeling out new promotions, although a few have become regular events, including 3-2-1 Fridays ($3 beers, $2 hot dogs, and $1 sodas) and a Friday-night concert series; March’s Pink in the Rink event to celebrate breast-cancer survivors and raise funds for treatment and research; and December’s Teddy Bear Toss, where fans bring stuffed animals and throw them on the ice after the home team’s first goal, to be collected and donated to underprivileged children.

Visits from David Ortiz and Pedro Martinez have proven hugely popular as well, and while the team doesn’t have someone of quite that stature stopping by this year, it has planned four guest appearances, including former Florida Panther goalie Roberto Luongo in November; Mike Eruzione from the 1980 U.S. Olympic hockey team in February, marking the 40th anniversary of the Miracle on Ice; and Brian Scalabrine from the Celtics’ 2008 NBA championship team in March.

The fourth guest is a little more outside the box: actor Leslie David Baker, who played Stanley Hudson in the hit TV show The Office, will visit in December for what the team is labeling its Office Holiday Party, inviting local businesses to basically celebrate the season at the MassMutual Center, watch a game, and meet Baker.

“We’re trying to provide more value to ticket holders, and letting them know we continue to invest in the game experience,” Costa said.

Another returning promotion is a Blast from the Past night in January, when the team reverts to 1990-era Springfield Indians jerseys, celebrating the 30th anniversary of that team’s Calder Cup win.

“We’re trying to tap into that old nostalgia; that’s a fun part of what we do,” Costa said, noting that the team still owns the Springfield Indians trademark. “We made the decision not to rebrand to that when we purchased the franchise. But using it here once in a while is fun, and we can create an event around it that people look forward to.

“I think we’ve done a good job of recognizing the past but also creating our own brand,” he went on. “We obviously still hear about the Indians quite a bit — there’s a lot of romanticizing around the Indians, and obviously they had some really good, successful years — but it wasn’t all roses during that time. They had their ups and downs.”

The goal with the Thunderbirds, obviously, is to have far more of the former than the latter.

“There’s been a tendency in the past to have a negative viewpoint about downtown Springfield,” he told BusinessWest. “We want create a positive experience. It’s a perfect size city for AHL franchise. Now we have to keep that trajectory moving forward and continue to sell tickets and show value. The minute we take our foot off the gas, our business is going to suffer.”

The Thunderbirds have been equally aggressive about community involvement, Costa said, with Boomer, the team’s mascot, making more than 200 appearances a year at businesses, schools, and organizations, and each player making at least three appearances as well, in addition to team events. The franchise has also developed a charitable foundation and youth-oriented outreaches like a reading program, a kids club, and a partnership that creates positive connections between area youth and the Springfield Police.

“Being here in this marketplace, there’s a duty for us to give back and truly be a part of the community,” Costa said. “So a lot of this stuff is focused on giving back and doing the right thing by our community in general.”

He’s gratified by the growth of the brand and the deepening of its civic roots, but admits he’s driven somewhat by anxiety and fear of failure, and still carries that chip on his shoulder from the early days. He also credits a hardworking staff willing to roll up their sleeves, hit the phones and the streets, and do the often-tedious work it takes to increase ticket sales and awareness of what’s happening on the ice.

“It’s awesome to see how the community has surrounded us and supported what we’re trying to do,” he said. “But we’ve never said, ‘hey, let’s just open the arena and see who comes out.’ We’ve always been proactive about getting out and telling our story. Now, we’re so well-positioned that, if the team has some success on the ice, it’s ready to take off. It’s palpable. If you come on a Saturday night, you can feel the energy.”

With so many entertainment options available — and a deep mesh of TV programming that makes it easier for families to just stay home — Costa and his team certainly aren’t letting up on the gas. In short, that number 6,793 continues to drive them.

“There’s nowhere else to go but up,” he said. “If we keep doing the things we’re doing, it will happen, and I think we’re seeing that now — that doing the right thing and working hard will lead to success.”