Throughout Her Career, She’s Made It Her Business to Get Involved 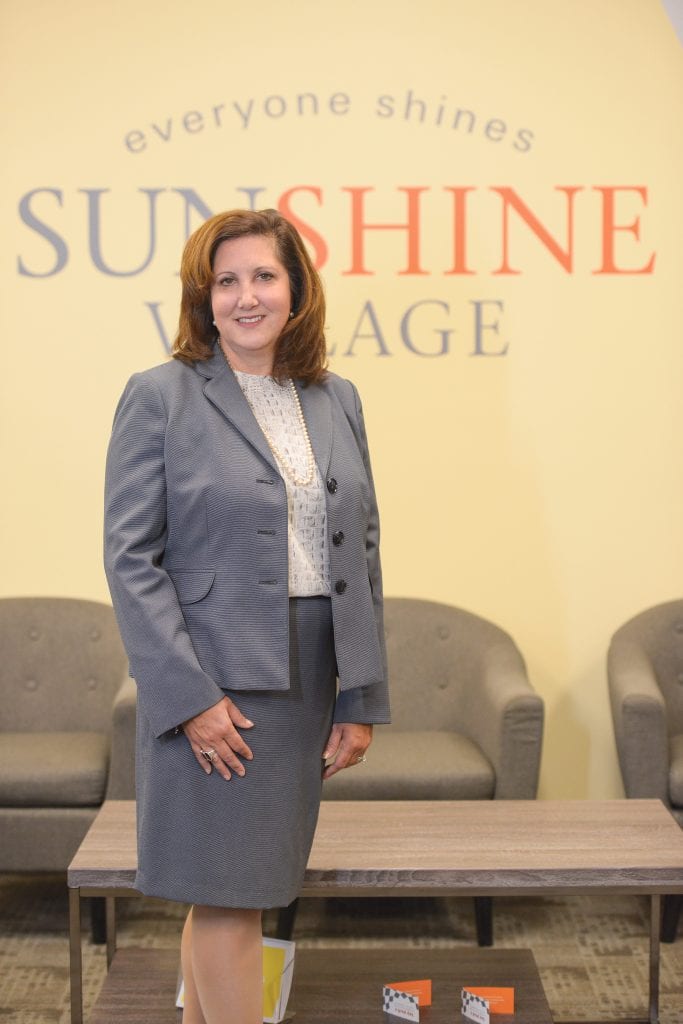 There have always been several ways in which Gina Kos embodies that phrase ‘Woman of Impact.’

At the top of the list, obviously, is the remarkable turnaround she has orchestrated at Sunshine Village, the nonprofit agency that operates a wide variety of programs that promote independence for individuals with disabilities.

When she took over as interim executive director in 1996, the agency was at a crisis point. Over the next several years, she scripted a compelling recovery story, stabilizing its finances, adjusting its roster of programs, and eventually transforming Sunshine Village into an employer of choice, so designated by the Employers Assoc. of the NorthEast.

And while doing all that, she has been very active within the community, especially Sunshine Village’s hometown of Chicopee. She’s served as a trustee of Elms College and as Chicopee water commissioner, and has also been involved with that city’s Rotary Club and Chamber of Commerce. Meanwhile, she’s donated her time, energy, and talents to region-wide nonprofits ranging from Dress for Success to the Regional Employment Board of Hampden County (now HassHire) to Link to Libraries.

But over the past several years, she’s managed to add a new wrinkle, a new vehicle for making an impact — one she’s rather proud of, actually. It’s as an unofficial but very valuable advisor to Chicopee’s mayor, Richard Kos, whom, as that surname makes clear, she knows quite well.

As Chicopee’s first lady, and even before gaining that designation — they became engaged while he was running for office — she said she’s been acting in a consulting capacity of sorts and introducing the mayor to both people and new opportunities.

“I had a full career, and I had been pretty involved in the city of Chicopee, and the Pioneer Valley, prior to marrying and him being elected mayor again,” she said. “But with his new position, he’s asked me for advice, and I’ve happy to offer it.”

When asked for examples, she listed everything from her suggestion to offer CPR in the city’s high schools so every student would know it when they graduated, to introducing the mayor’s office to a program called “The World is My Classroom,” which brings students on field trips to area employers, such as Hazen Paper in Holyoke and the Chicopee wastewater treatment plant, for lessons on the environment.

“When I would talk internally, or externally at various trade association meetings or other gatherings with other local nonprofits, I’d say, ‘where is the money coming from?’ And people would say, ‘shhhhhh … we don’t talk about money — we’re mission-driven.’”

She said she’s also helped the mayor with the challenging task of finding individuals to serve on boards and commissions (something she’s done, as noted earlier), and overall has been a “chief strategist,” as she called it.

“Supporting him in his public service has allowed me to give back to the city of Chicopee, but personally, I’ve also received a lot of satisfaction from that,” she explained. “Over the past six years, I’ve attended numerous events, so many I can’t count, and that’s exposed me to so many great people; it’s been a wonderful experience.”

Kos’s assistance to her husband, and all those other forms of involvement, are in keeping with a career-long philosophy of putting her considerable talents to work benefitting not just Sunshine Village and its clients, but the region as a whole.

It’s a mindset she sums up quickly and effectively with this comment to BusinessWest regarding the many ways she has become involved. 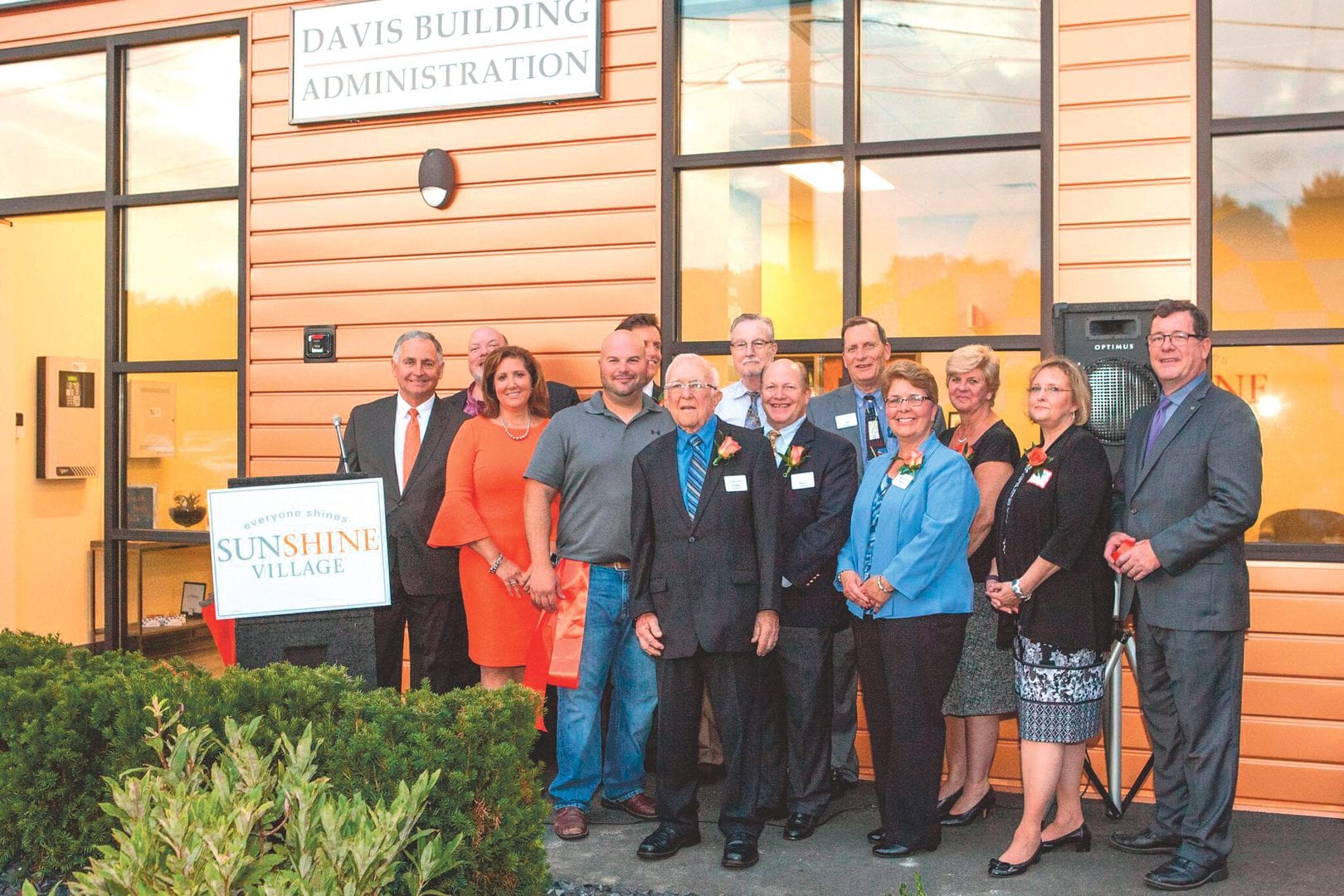 Gina Kos, third from left with her husband mayor Richard Kos, far left, leads a host of guests in ceremonies to commemorate the 50th anniversary of Sunshine Village in 2017.

“When you’re given a lot, you have to give back,” she said, adding that she has been given a lot in terms of education and opportunities to serve the region.

And she has certainly given back — in all manner of ways, from being a forward-thinking leader of a pivotal nonprofit organization at a time of profound change and a host of new challenges for all nonprofits, to valued board member for a host of colleges, universities, and economic-development-related agencies, to mentor for countless staff members. And, yes, as an unpaid advisor to the mayor.

Like we said, she has spent her life and career as a Woman of Impact.

Kos will have to make some room in her office for the award she’ll receive from BusinessWest on Dec. 6. That’s because there’s already a number of other plaques and certificates crowding her desk and credenza.

Together, these honors speak to a career spent giving back, and it’s a pattern that began when she became a mortgage officer with WestBank.

And as most know by know, it was while getting involved in the community that Kos became acquainted with Sunshine Village.

Indeed, she drove the beer cart at the agency’s inaugural fundraising golf tournament at Chicopee Country Club, and enjoyed the experience so much, she signed up to do so at the next gathering.

To make a long story short, by the time players teed it up the following year, Kos was on the course not as a volunteer, but as a member of the Sunshine Village staff — director of marketing and development, to be exact.

She told BusinessWest that she came on board with a five-year plan in mind — not for the organization, but for herself. And that plan was to give the agency five years and then return to the corporate world.

But Kos would essentially make her foray into the nonprofit realm a one-way ticket. As she approached that five-year mark, the executive director left, and the agency’s board asked her to step in as interim.

How? Essentially by bringing a more business-like approach to the assignment of running a nonprofit agency, something she said was lacking — and needed — when she changed course career-wise.

“When I came to Sunshine Village as marketing director and would talk internally, or externally at various trade association meetings or other gatherings with other local nonprofits, I’d say, ‘where is the money coming from?’” she recalled. “And people would say, ‘shhhhhh … we don’t talk about money — we’re mission-driven.’

“And I would look at them say, ‘if you don’t talk about money, you’re not going to have a mission,’” she went on. “So, from the start, coming from the corporate world, I cared as much about the money, the funding, as I did about the mission, and it’s allowed me to make decisions with the board of Sunshine Village to create an organization that’s fiscally sound and very accountable to the taxpayer dollars that we’re so fortunate to get.”

And while this was a somewhat new way of thinking a quarter-century ago, today, all nonprofits think and act this way, essentially out of necessity, she told BusinessWest.

That’s because of a host of changes in the landscape — involving everything from the number of regulations that must be adhered to, to new employment laws regarding everything from wages to paid leave — that have made nonprofit management perhaps more challenging than it has ever been.

“If you were to ask me, managing a nonprofit is harder than managing a business,” she opined, “because in addition to everything that business has to worry about, within nonprofits, we have to worry about so many other things; in addition to state and federal labor laws, we have to get accredited by either state or federal bodies, and we have so many more compliance issues because we’re nonprofits.

“We’re managing everything that a business has to manage, as well as looking at our bottom line to make sure it’s positive,” she continued. “Being a nonprofit doesn’t mean no profit; every year, costs go up, whether its health insurance or salary increases or just paying for the electricity to keep the lights on.”

Meanwhile, the broad realm known as giving has changed in many ways, she said, listing everything from the ways people give to the amounts they give, to the growing number of entities asking people to give.

“When I was going to school, in parochial school, you had to sell candy bars or magazines,” she explained. “The public schools never had to do this; now, they have to fundraise as well. And so are the kids playing sports and the cheerleaders. And in addition to that, we have all these natural disasters. Ten or 20 years ago, people weren’t asked for money to help the people impacted by a hurricane in Texas.

“There’s more people looking for money; all the causes are good causes, but there’s a lot more competition for private fundraising dollars,” she went on, adding that, in this environment, nonprofits must be laser-focused on fundraising, and also on showing donors that their gifts have an impact.

While leading Sunshine Village to financial security and a place as an employer of choice in these challenging times, Kos has continued — and continually elevated — her work within the community.

As noted earlier, this has been a priority for her throughout her career, starting when, at age 23, she accepted Mayor Joe Chessey’s invitation to serve on the Chicopee Water Commission. A pattern of involvement has continued, and in her high-profile role as director of Sunshine Village, Kos has been afforded with more opportunities to give back.

She served on the board at Westfield State University and Elms College, with a host of business and economic-development-related groups, and also with several nonprofits.

She reads to fourth graders at Fairview Elementary School as part of Link to Libraries’ celebrity reading program, for example, and serves meals at Friends of the Homeless in Springfield.

Each experience is different and brings rewards on a number of levels, she said, adding that, while it’s sometimes hard to do so, she generally makes room in her schedule for such activities. And for many reasons.

Helping others is a big part of it, obviously, but by being active, she becomes more aware of the issues and challenges facing the region and the individuals who call it home. This makes her a better manager, a better leader, and even a more effective advisor to Chicopee’s mayor, especially with matters such as personnel searches and filling all those boards and commissions.

“I’ve done a lot at Sunshine Village, and I’ve been on presidential search committees for area colleges,” she said, noting that she’s done such work at the Elms and Westfield State University. “I’ve also done a lot with recruiting, and I’ve tried to help him with some of those things.”

But it is yet another example of how, throughout her life and her career, she has found the time, inclination, and energy to give back to others, and the community as a whole.

And that’s why she’ll be at the podium on Dec. 6 accepting her Women of Impact award, and then adding it to a growing collection of other plaques in her office.

As she said, “when you’ve been given a lot, you have to give back.” And that’s exactly what she’s done.