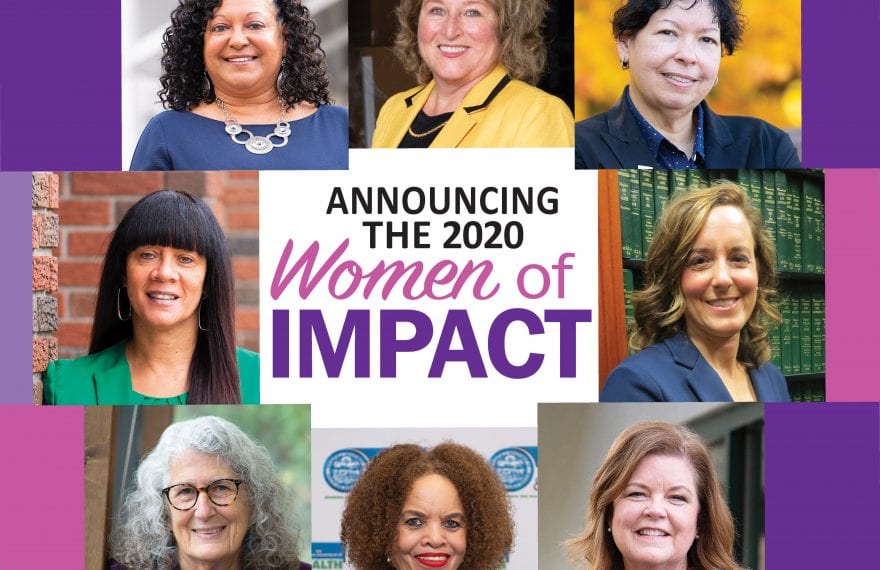 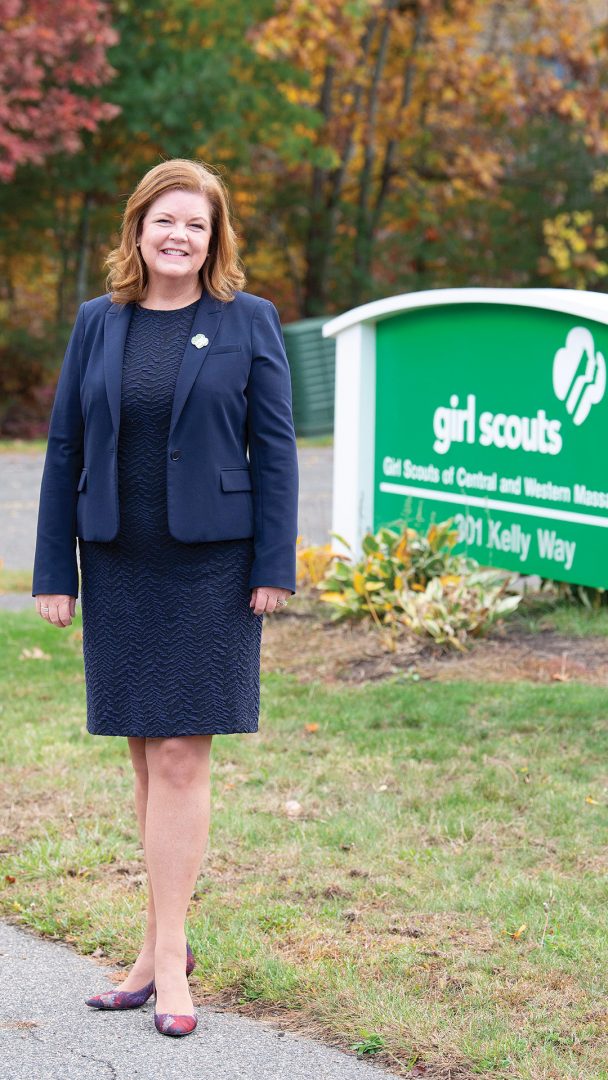 Pattie Hallberg has a large collection of keepsakes scattered about her office on Kelly Street in Holyoke. Together, they effectively tell a story of who she is, what she does, what she believes, and what’s important to her.

There’s the Ruth Bader Ginsburg bobblehead, for example, an indication of whom she draws inspiration from. There’s also the sign siting on her window sill that reads “No Solicitors, Unless You Sell Thin Mints,” a nod to her role as CEO of the Girls Scouts of Central & Western Massachusetts (GSCWM) and one of the programs for which the organization is most noted — cookie sales.

There are also a few framed quotes. One, attributed to Juliette Gordon Low, founder of the Girl Scouts, reads: “The Work of Today is the History of Tomorrow, and We Are Its Makers.” There’s another that’s unattributed and says simply “Do One Thing Every Day That Scares You.”

Hallberg must have been at least a little scared the day she made the decision to leave her job as chief executive of Invent Now Kids Inc., a subsidiary of the National Inventors Hall of Fame, and find a new challenge. Actually, she and her husband took the same plunge, if you will.

“I had four girls, and we were all kind of in transition,” she said while relaying the story. “My oldest was graduating from college, my two youngest were graduating from high school, and Jessica was at Lehigh University. I decided it was time for a transition for me; my husband and I decided that we were going to leave Northeast Ohio, and whoever found a job first — that’s where we were going to go.”

Long story short, she found employment first. Only it wasn’t a job she found, but a passion — or, to be more, precise, a new outlet for an existing passion.

This bold career move itself, fueled by ambition, confidence, and some adventurousness as well, makes a Hallberg a fine role model for the thousands of Girl Scouts under her charge. But there are plenty of other reasons why she’s worthy of that descriptive phrase. That list includes her accomplishments with this Girl Scout body, which resulted from a merger, which she managed, of three councils; her advocacy for young women; her work to inspire girls to pursue careers in STEM; her involvement in the community (she’s involved with groups ranging from the Women’s Fund of Western Massachusetts to the Investing in Girls Alliance in Worcester); and even how she has handled the responsibilities of being a mother and grandmother.

“It’s so important to teach children in general — for me, my job is girls — to learn about the community and to give back to their community,” she said. “That’s the ultimate community service in Girl Scouting, and I try be a role model for that; I try to give back to my community as best I can.”

Mostly, though, she is a role model, and a Woman of Impact, for the way in which she has devoted most of her career to understanding the issues and challenges facing women and girls — and there are many of them — and being proactive in finding ways to address them.

When asked about what her work entails, Hallberg said there is a lengthy job description, as might be expected when managing a $4 million agency. But overall, she said it boils down to two main duties — listening and relationship building.

Suffice it to say, during her career advocating for women and girls, she has gone well beyond talk. And that’s why she was nominated for, and is a recipient of, this BusinessWest honor.

Among her many goals and aspirations, Hallberg wants to someday hear someone say, ‘Eagle Scout? Is that the equivalent of being a Gold Scout in the Girl Scouts?’ or words to that effect. 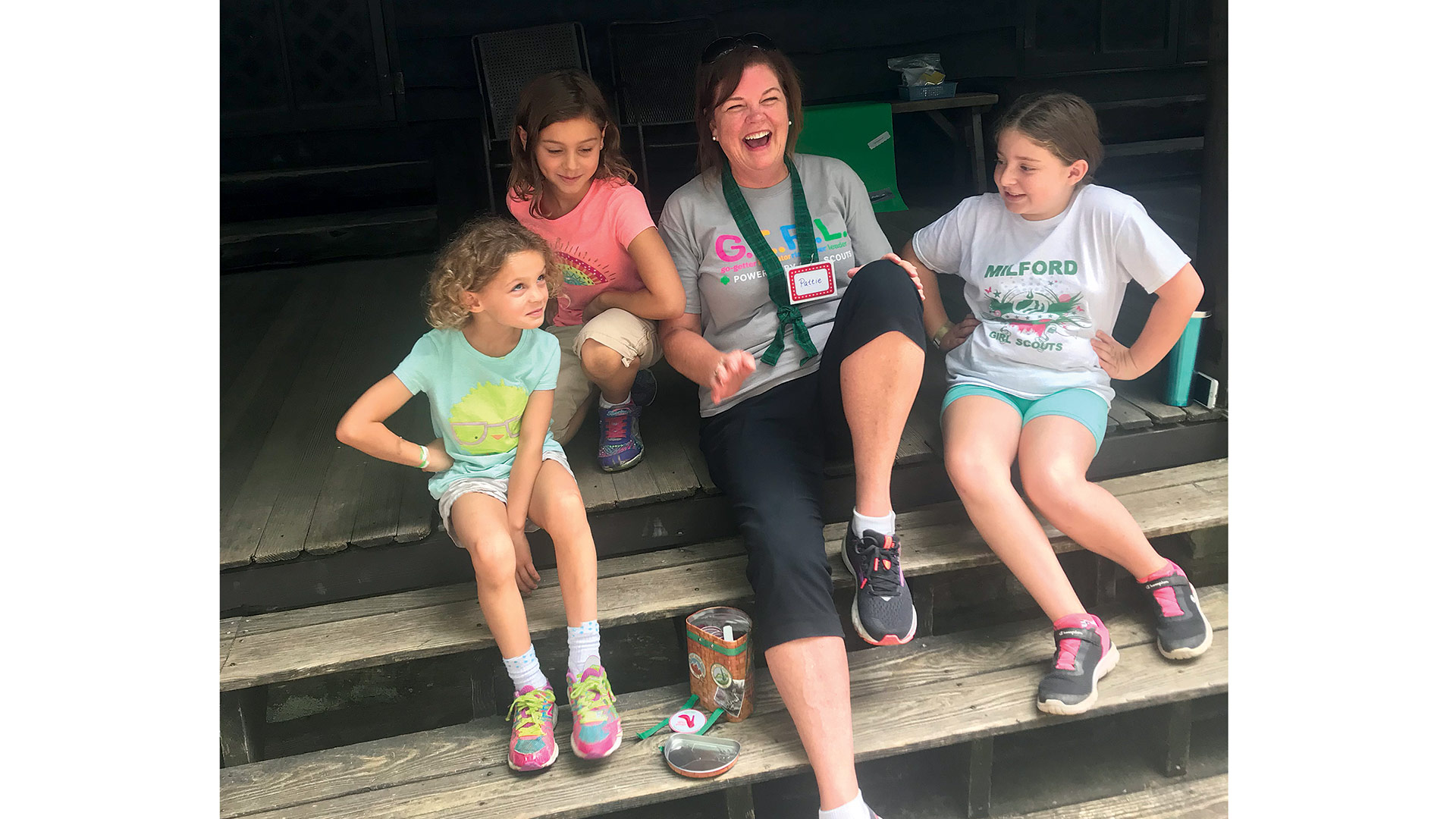 Pattie Hallberg says she enjoys spending time with Girl Scouts, and those who have been Scouts and can talk about what that organization has done for them.

She’s heard the reverse of this question more times than she would care to say or count, because while most everyone has heard references to Eagle Scouts, the highest rank in Boy Scouts and a proud line on any résumé, only those in the know understand its counterpart. Hallberg wants more people to know and thus put an end to those frustrating questions.

But she has more pressing concerns at the moment, especially the many challenges facing girls of all ages today. When asked to give a list, Hallberg put stress at the very top of it.

“Girls are under an incredible amount of stress today,” she explained. “There’s the stress to do well in school, and all those things that we’ve all had, but there’s this added layer to it now that’s really overwhelming.”

Much of this stress is connected to bullying, she went on, adding that, while it has always been an issue, today it is an even deeper concern, for obvious reasons.

“The stories are overwhelming … what can happen to a girl in just a moment, mostly around the internet,” she said. “It’s frightening, and it really takes its toll on these girls.”

For these reasons, the Girls Scouts and especially the GSCWM have always been focused on creating what Hallberg called a “safe space,” one in which they could be different and unique. But beyond that, the agency is devoted to giving them opportunities — and the confidence to realize them. 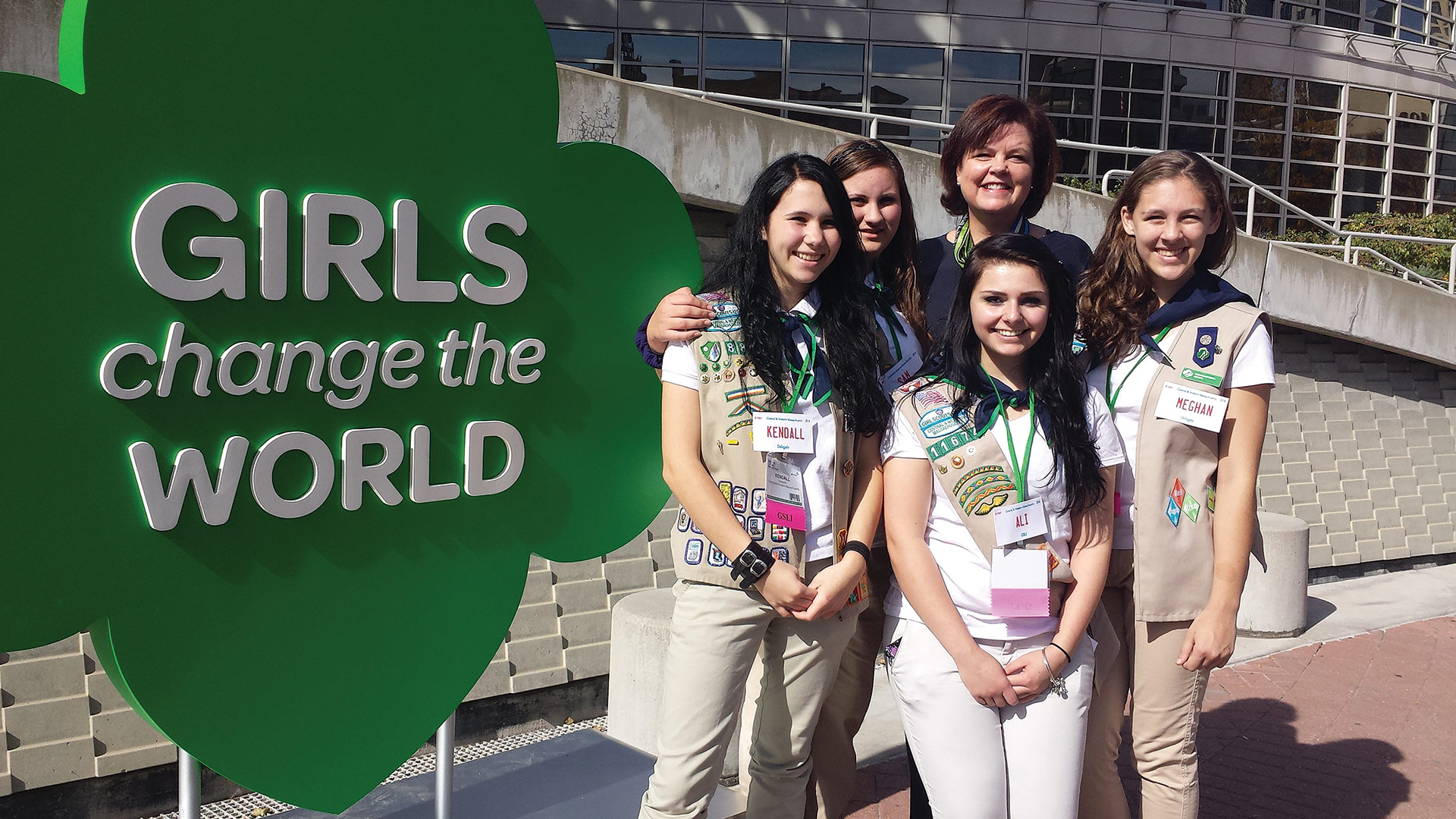 Pattie Hallberg has devoted much of her life to being an advocate for women and girls, especially in her current role with the Girl Scouts.

Which brings her back to STEM, and the numbers involving girls in those fields, statistics that in large part fueled her desire to seek a new career challenge.

“I developed a sincere concern about girls and women in the STEM field,” she recalled, flashing back to her days at the Inventors Hall of Fame. “The youth STEM programs we ran … at the elementary-school level, in kindergarten, first, and second grade, half of those kids were girls, and half were boys. Around third or fourth grade, the girl numbers started to drop, and there were more and more programs where there was a disproportionate number of boys.”

Years later, the problem persists to a large degree, she said, adding that changing this equation has been one of her many goals with the GSCWM.

Indeed, since arriving in Western Mass. in 2008, Hallberg has done much more than merge three Girl Scout councils, covering 186 communities, into one, although that was a significant feat in itself. She has shaped the organization into a leader in this region in advocacy for young women and also put in place an aggressive strategic planning process that has sharpened the council’s focus and championed leadership development of young women.

As part of these efforts, the council has instituted a Girl Leadership Board made up of two dozen girls who meet regularly with Hallberg to share ideas, concerns, challenges, hopes, and aspirations. An important aspect of this board is the manner in which she has created space and practice for young women to speak out and experience being heard and empowered to bring their ideas to life through scouting.

“We have 18 middle- and high-school girls, and I meet with them once a month on a Saturday morning,” she told BusinessWest. “They are fantastic at talking about what it’s like to be a girl right now, what they need from programs like the Girls Scouts, and what they want, which is different from what they need. So I get a lot of perspective.”

And this perspective often helps shape programming and the overall direction of this 108-year-old institution, said Hallberg, noting that her job essentially involves a balance of honoring the history and traditions of the Girls Scouts, but also looking to the future as well.

“There’s so much to learn from the past and so much to learn about the future from these girls,” she went on. “What I try to do beyond the job of running this business and organization is to really try to understand the issues for both women and girls in our area and to advocate for them.”

Managing the GSCWM, an agency that covers territory ranging Worcester to the New York border, requires Hallberg to travel extensively. She rolled her eyes when asked how many miles she puts on her car each year.

She spends the time on the road listening to books on tape — and thinking.

Thinking about the many challenges facing young women today — from bullying to financial literacy to having the skills needed to succeed in today’s technology-driven economy.

She’s managed to convert many of these thoughts into effective action, and this helps explain why she is a member of the Women of Impact class of 2020.