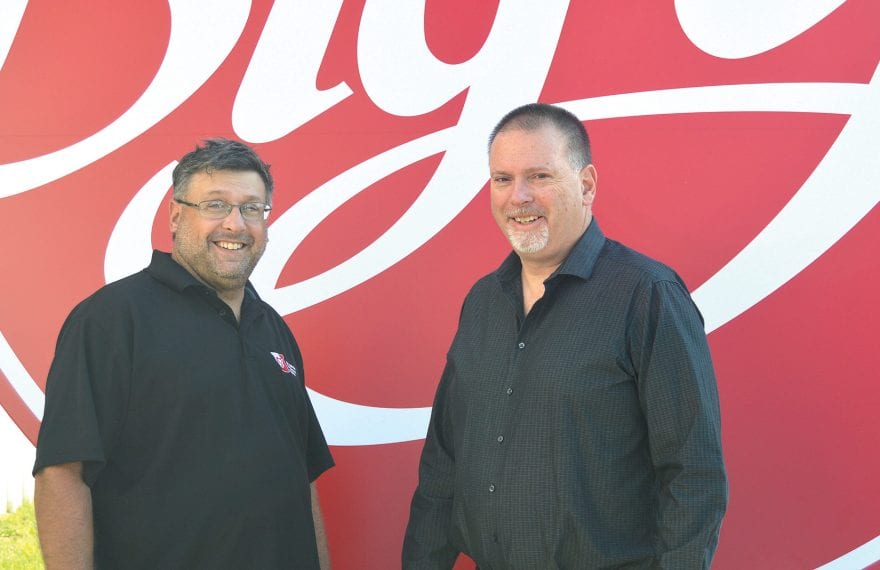 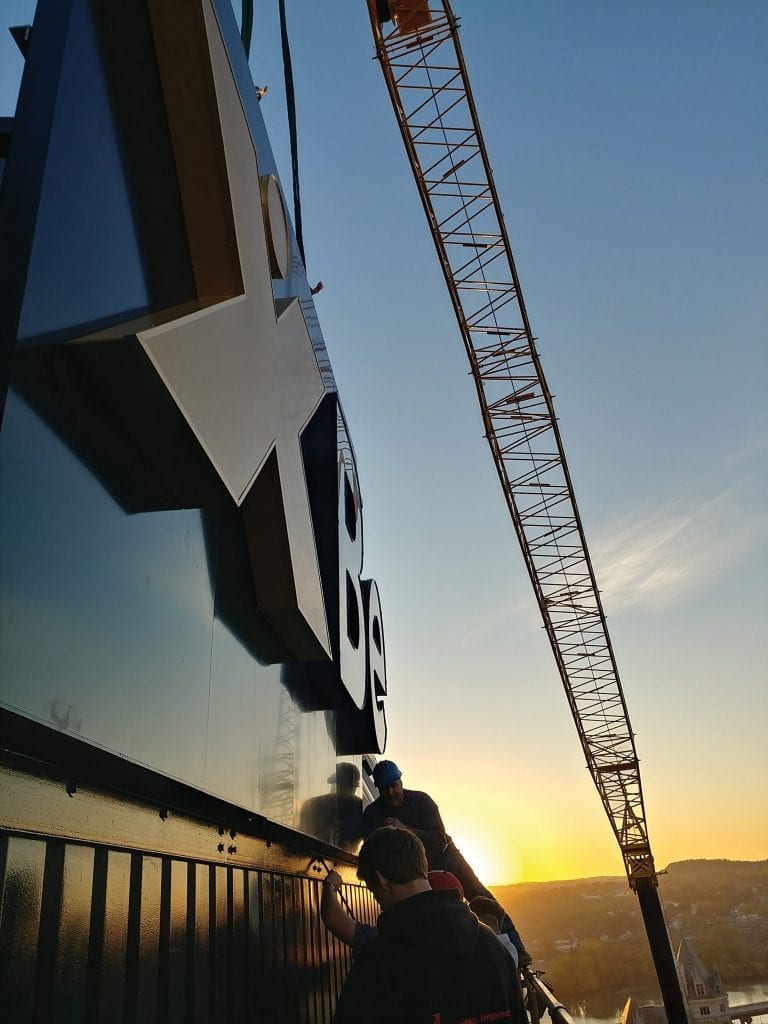 A team from Graphic Impact Signs installs a sign for Berkshire Bank.

John Renzi says that, when the pandemic arrived in mid-March, the sign industry, like most all others, was hit hard.

Indeed, as a sector that has always been a good barometer of the economy and one that suffers greatly during downturns, the sign business was impacted by the pandemic in a number of ways, said Renzi, a principal and account executive with Pittsfield-based Graphic Impact Signs (GIS). He listed everything from the prompt shutdown of the events, sports, and entertainment industries and a halt to orders from those solid customers, to disruptions in the supply chain that have hindered many players in this large and diverse field from completing orders they do have.

GIS has certainly not been immune from any of this, said Renzi, but he believes the company acquired by his father 33 years ago has fared better than most because of the two traits that have defined it from the beginning: flexibility and resiliency.

They have been displayed in everything from how the company has pivoted and started making new lines of products, such as the plexiglass barriers now seen in all kinds of businesses, to how it has maneuvered its way through those supply-chain issues by working with suppliers and stockpiling essential materials that are now in very short supply.

Regarding those barriers, or shields, the company tacked in that direction as the business world paused and sign work all but stopped as the pandemic arrived, he noted, and very quickly had product moving out the doors of the Pittsfield plant.

“We had the equipment, and we had the supply,” he told BusinessWest. “So we were able to move from idea to prototype to our first order, which was a $138,000 order, in seven working days. That’s the flexibility we have, and it has allowed us to be successful.”

That same flexibility is effectively serving the company as it transitions back to making signage, said Dan Renzi, John’s brother and partner, especially when it comes to supply-chain issues.

“Many of our suppliers just stopped delivering for quite some time, and then, when they started up again, the manufacturers just could not get the product to us,” he explained, referring specifically to the white polycarbonate needed in most sign projects. Working with existing and new suppliers, GIS has been able to stockpile and warehouse this essential product while some competitors are waiting for what could be three or four months to get what they need.

Thus, the company is well-positioned, even in the middle of a pandemic, to broaden an already-impressive portfolio that includes clients such as Big Y, General Dynamics, and a host of banks and credit unions, especially those installing interactive teller machines (ITMs).

GIS has become an industry leader in making the surrounds, or canopies (see photo, page XX), for these devices, and it is now making them for Berkshire Bank, PeoplesBank, Country Bank, bankESB, and several other institutions.

“The ATMS are on their way out, and the ITMs are moving in,” John noted. “More banks are expanding into this because it’s clearly the future, and we’re one of the leaders in making signage and surrounds for these ITMs.” 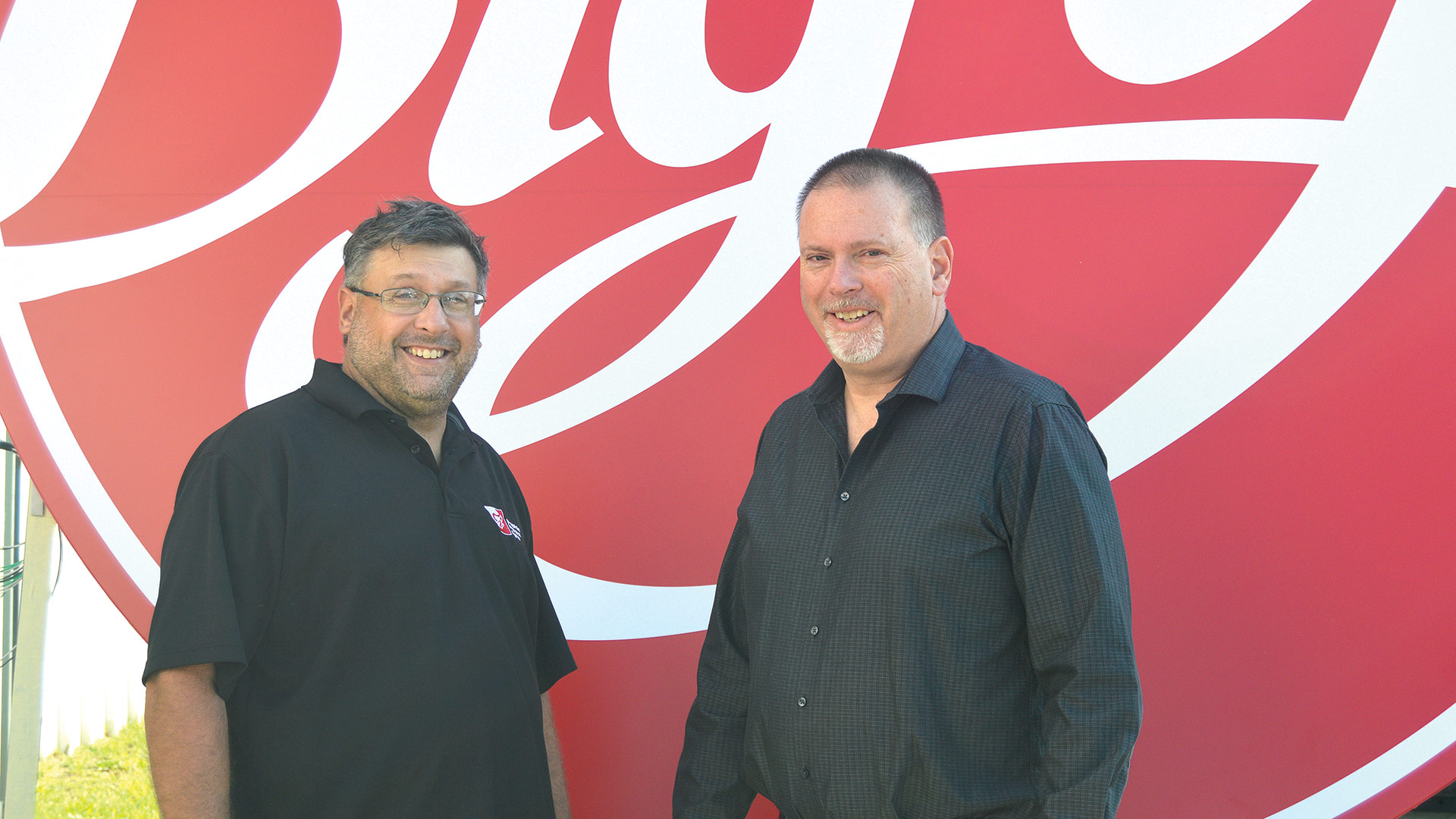 Dan Renzi, left, and his brother, John, stand in front of a new sign made for Big Y.

This status, coupled with the company’s flexibility and its ability to work with clients to design, develop, and install signage that is indeed impactful, has it very well-positioned for the future.

“Over the years, we’ve seen people come in with, literally, something scribbled on a piece of paper,” said Dan, explaining how GIS is involved with the client from start to finish. “We’ll take things from that really rough sketch to a complete, finished product all in one building; we can take a dream and turn it into reality.”

For this issue and its focus on Berkshire County, BusinessWest turns its lens on GIS and how it has been able to use its flexibility and resiliency to not only ride out the pandemic, but take new and meaningful steps forward.

It’s not an official indicator of how a sign business, or any other business, for that matter, is faring. But the Renzi brothers consider it one, and they’re quite proud of it.

They were referring to how signs that have the company’s name on it — albeit in small letters that you probably wouldn’t notice (although the brothers do) — have shown up in some recent movies and TV series coming out of Hollywood.

“We had the equipment, and we had the supply. So we were able to move from idea to prototype to our first order, which was a $138,000 order, in seven working days.”

“That’s pretty cool when you’re sitting there at a movie, either on Netflix or on the big screen, and you see one of your signs,” said John, noting that some of the company’s installations have become backdrops recently in the movies Knives Out and Behind the Woods, and the true-crime TV series Dirty John.

These recent on-screen appearances are merely the latest … well, signs of continued growth and prosperity for a company that has been part of the landscape in the Berkshires for more than 60 years. Known first as Alfie Sign Co., the business caught the eye of John Renzi Sr., a painter whose portfolio was dominated by commercial clients at a time when Pittsfield was certainly seeing its fortunes wane as its main employer, General Electric, was closing its massive complex.

“GE was moving out, and his painting business was commercial business only,” said John Jr. “So when you had large businesses moving out of Pittsfield, he was trying to set up a future for my brother and me.”

The company had a solid reputation and an impressive client list, he went on, noting that it had created signs for Fayva Shoes, Subway — it was involved in the first-generation logo for that chain — and D’Angelo’s, among others. But it wasn’t exactly well-run.

“He knew that things needed change — it was a dollar-in, dollar-out company, and it had its challenges; it took a while to get the company on its feet,” John went on, adding that his father brought some discipline and direction to the venture and put it on more solid ground, with the intention of eventually passing it on to the next generation. Which he did, but not before that generation was fully prepared to lead. 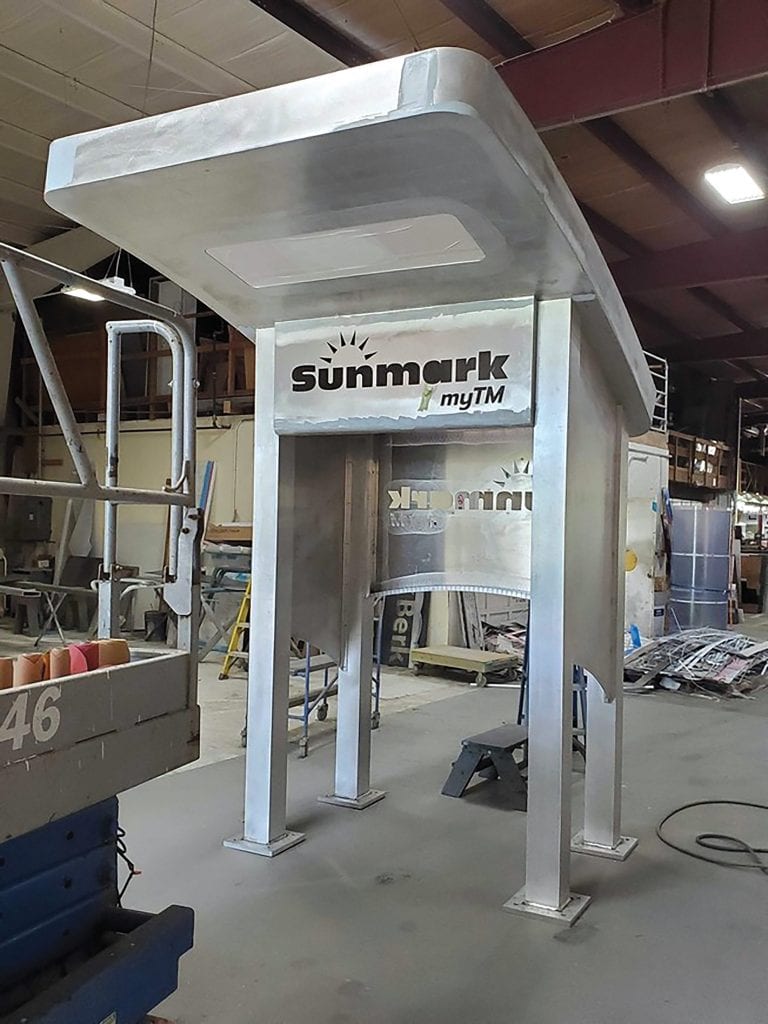 “Dad didn’t just hand over the business — he wanted to make sure we could handle it,” said John, noting that he and Dan officially became owners five years ago, but they’ve been managing it for the past 15. “And he did it right — we learned right from the bottom, cleaning toilets, sweeping floors, counting bolts, and getting dirty.”

In recent years, the company has, perhaps without knowing it, steeled itself against downturns — and, yes, even a pandemic — by broadening and diversifying the portfolio of clients and creating a culture grounded in the flexibility and nimbleness noted earlier.

Which brings us back to March, and the arrival of COVID-19.

“We had some really good things moving in the right direction right at the beginning of the year,” John said. “We had a good winter, things were lining up well, and we were really excited about this year.

“But when COVID hit, it hit with a jolt,” he went on. “We weren’t certain what was going to happen or how we were going about things, but if there’s one thing that my brother and I believe in — pre-COVID, during COVID, or post-COVID — it’s that, the more flexible you are as a business, the more successful you can make yourself. And what we found is that, due to our flexibility with working with our supply chain and working with our clients, we were able to manage this crisis effectively.

One of the best examples of this flexibility was the company’s ability to pivot and begin making the plexiglass shields now seen in restaurants, banks, retail outlets, and countless other businesses.

“We reached out to suppliers and started ordering clear acrylic, clear polycarbonate, and started making these custom guards that could be adapted for bank-teller lanes, tabletops, and other uses,” Dan explained, noting that GIS made this adjustment as a way to bring employees back to work after the pandemic hit and sign work ground to a near-halt. “There was a little bit of a learning curve, but overall, it was an almost seamless transition.”

John agreed, noting that the company didn’t have to make any additional investments or find any new suppliers.

“It was just a matter of quickly training employees to make shields instead of signage,” he said, noting that, while GIS is still making these shields for a few hospitals and office buildings, it is increasingly turning its focus back to making signs.

While many sectors of the economy have slowed because of the pandemic, there are still growth opportunities for companies positioned to take advantage of them, said John, noting that banks, with the emergence of the ITM, clearly represent one of those opportunities. 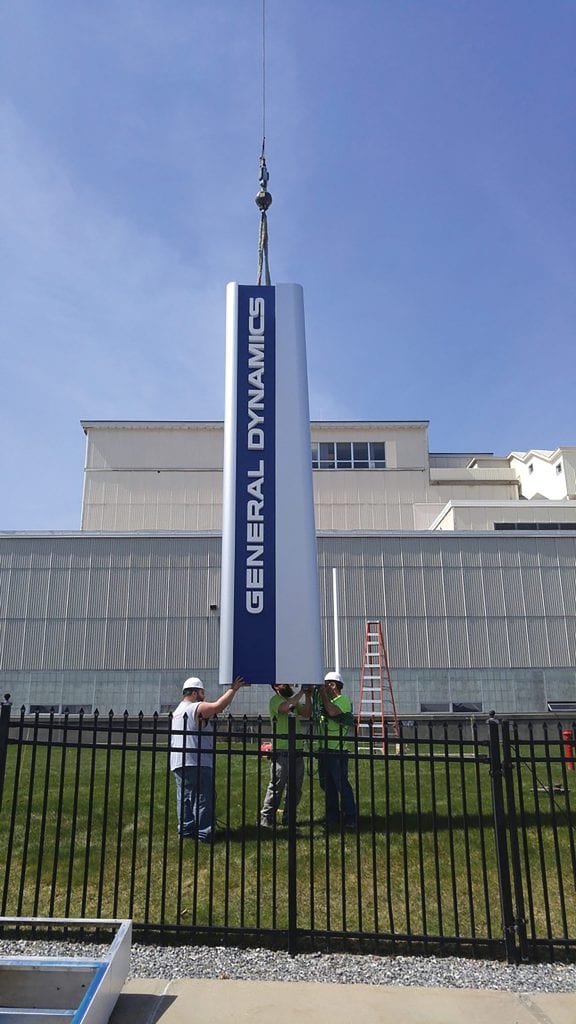 A new sign the company created for General Dynamics.

He noted that banks were already moving in this direction, and the pandemic, which closed bank lobbies for months and all but forced customers to use drive-up windows for most all transactions, has only accelerated the process.

“Banks are adding them at their branches, and we’ve also seen an increase in free-standing ITMs that are not at branches,” he explained. “Chase Bank is the first one to do this; they’re looking to close 1,000 locations — downtown locations that don’t have drive-up service — and buy remote sites just outside cities, and put up these free-standing ITMs.

“We’re one of the few companies in the United States building these free-standing ITM canopies,” he went on. “It’s a very interesting development and a great opportunity for us, and we saw it happening pre-COVID; it’s 100% the future.”

As for the future of the sign business … that picture is certainly not as clear, said the brothers Renzi, noting, again, that the pandemic has hit this sector very hard, and there was already a good deal of consolidation before COVID-19 arrived as Baby Boomers retired and sold their ventures to employees or larger players from outside the region.

And since the pandemic, some of the smaller players have closed down, they said, noting they didn’t have the wherewithal to withstand the loss of business and the many other challenges that visited the industry. And many mid-sized companies have struggled with everything from retaining employees to finding the materials they need to complete orders.

GIS, again, is not immune from these challenges, but it certainly seems well-positioned to not only survive but thrive in the post-COVID world.