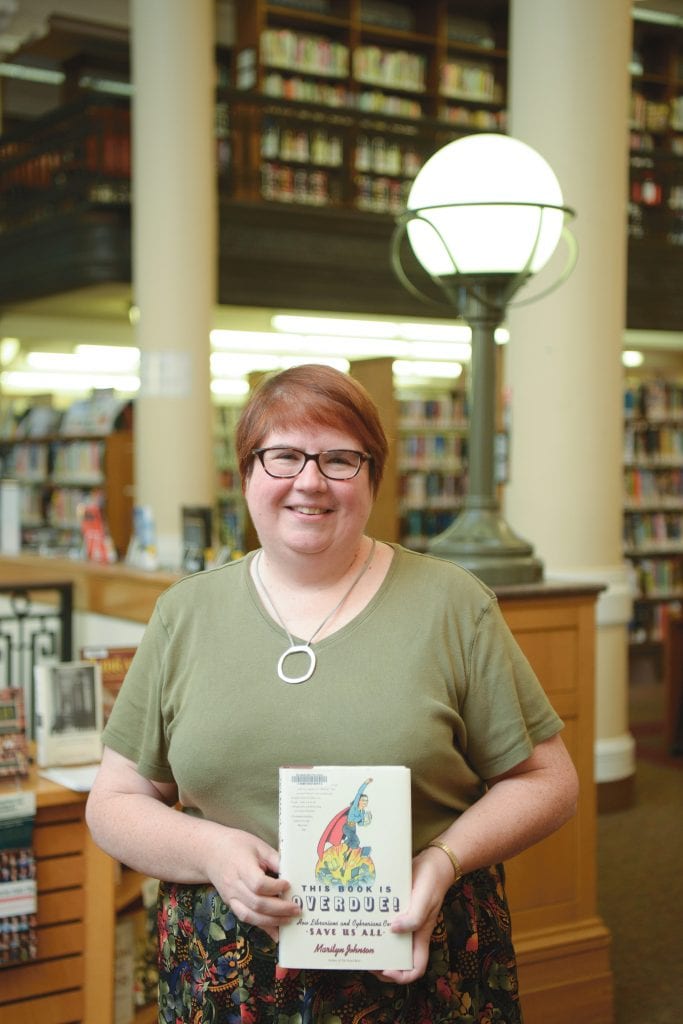 She Keeps Writing New Chapters to a Story of Community Activism

Jean Canosa Albano says she’s been called an ‘honorary Latina,’ not once, but on a number of occasions.

That’s not an official title by any means — there’s no plaque or certificate to this effect, obviously — but it might be the honor, or designation, she’s most proud of.

That’s because, while she’s not Hispanic in origin, she speaks Spanish — she’s studied it here and abroad — and has therefore made thousands of non-English-speaking visitors to the Springfield City Library more comfortable and better able to utilize its many resources.

More importantly, though, she has advocated for that constituency — and in many ways become part of it — during a lengthy career devoted not only to library science but to community building and community involvement.

A few weeks back, Albano again led a contingent from the Springfield City Library marching in the annual Puerto Rican Parade through downtown Springfield, something the library has done the past several years. It’s a symbolic step and an indicator of how the institution, and especially Albano, have taken great strides, literally and figuratively, in efforts to serve that constituency and connect it with resources.

“I’m not a Latina — I have a different heritage,” she told BusinessWest. “But I have embraced it as much as somebody from outside the culture can. “I’ve been called an honorary Latina, and I love it when I hear people say that.”

But service to the Hispanic population is only one chapter, albeit an important one, in the story of Albano’s career spent with the library — and as someone committed to being involved in the community and inspiring others to get involved.

“I’m not a Latina — I have a different heritage. But I have embraced it as much as somebody from outside the culture can. “I’ve been called an honorary Latina, and I love it when I hear people say that.”

To put that service, and her career, in their proper perspective, she said that all through it, she has adopted a variation, if you will, of Shirley Chisholm’s often-quoted bit of advice. The first black woman elected to Congress famously said, “if they don’t offer you a seat at the table, bring a folding chair.”

“I feel very fortunate — the Springfield community is very open and welcoming, so I haven’t had to bring my own chair very often,” Albano explained. “But I have made my own invitation sometimes; when I see something going on in the community that I would like to get involved in or when I think the library could benefit from me being there, or when we have something to offer, I won’t be shy about inviting myself to be part of it.”

Examples of this mindset abound, from her participation in the Reading Success by Fourth Grade initiative to Gardening the Community; from summer learning groups to the Young Professional Society of Greater Springfield.

With that last one, she acknowledged that maybe — that’s maybe — she’s not exactly in the target demographic group. But she saw a group with an intriguing mission and another opportunity to help strengthen the community through her own involvement.

“I said to myself, ‘they’re doing cool work, but maybe I’m a little old for that group,’” she recalled. “Then I saw some news coverage on them and heard that they didn’t have an age limit, so I decided to join. I go to the social events, and have learned about the small-business development happening in those circles, and connected them to the library; I really enjoy it.” 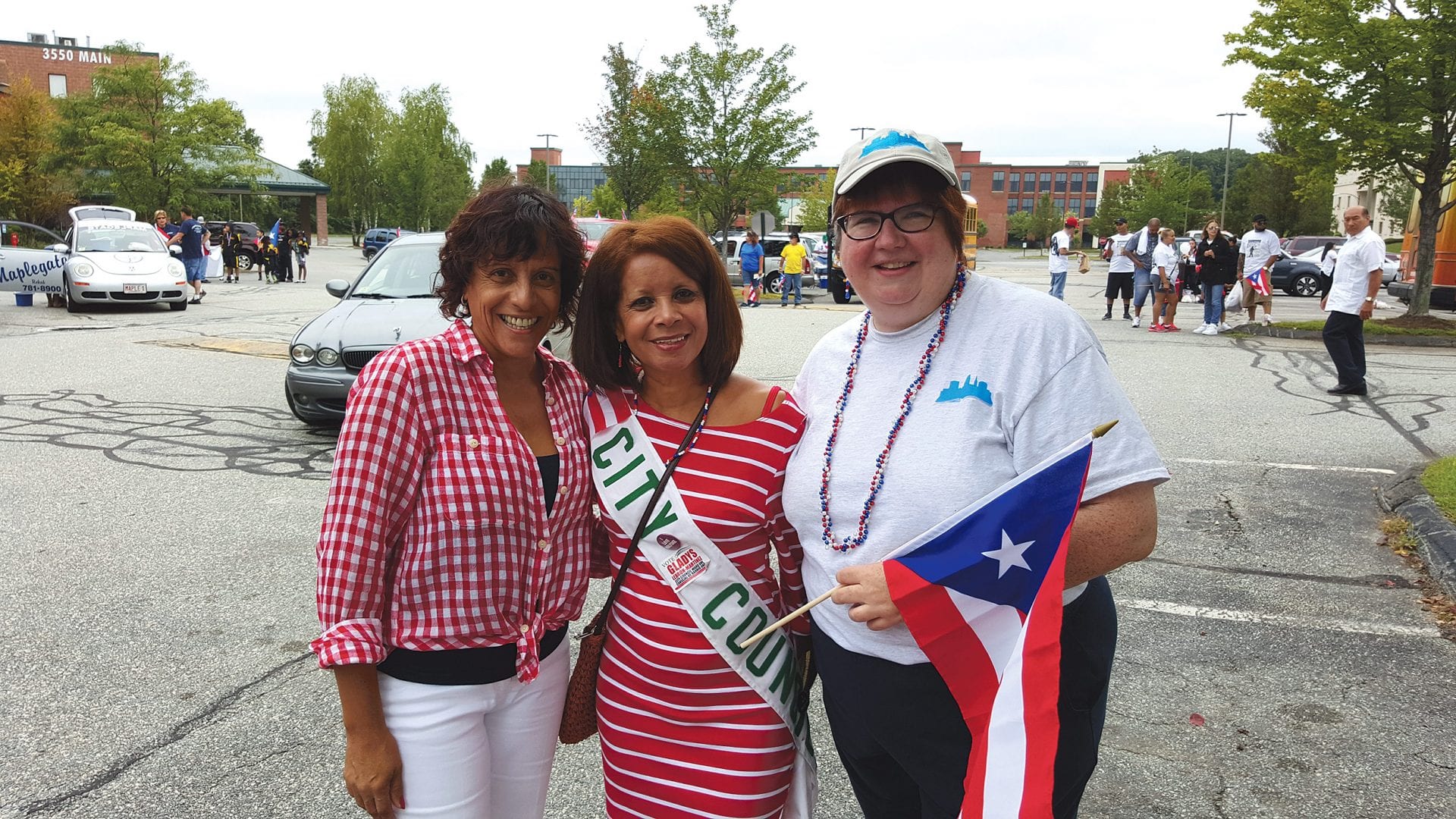 As she said, she’s been making her own invitations and getting involved. And while doing that, she’s always looked for new and different ways to help others get involved and help them develop professionally — especially women and minorities.

Which brings us to “My Beloved Springfield,” a women’s leadership panel and information fair she created. The most recent edition, staged last spring, featured a host of speakers discussing the paths they took to leadership positions, including Springfield City Councilor Kateri Walsh; Arlene Rodriguez, a senior advisor for the Mass. Department of Higher Education; and others.

Looking back on her career, Albano said her command of Spanish has created opportunities for her — when she entered a poor job market in the mid-’80s, it helped her land a job with the Springfield City Library. And in many ways, she has dedicated her career to creating opportunities for others.

As we explore the many ways she has done that, it will certainly become clear why this public servant, who keeps writing new chapters to her story of involvement, is a Woman of Impact.

That’s the two-word phrase that caught Albano’s attention as she read a job posting for the library position that would become the springboard for a career she says she “fell into.”

It was as a library associate with the Brightwood branch in the city’s North End neighborhood, heavily populated by Hispanics then and now.

“I remember saying to my mother, ‘I think this is a job I can do and that you would love,” Albano recalled, adding that her mother wanted to get into library science after high school, but was hindered by the cost of higher education.

Turns out, she came to love it herself — not only the job, but working with and on behalf of the residents of that neighborhood.

“Speaking Spanish was a real help in not only communicating with people, but also getting out into the community, becoming part of it, and discovering what the people there wanted and needed — from the library and from life — so we could respond,” she said. “I remember going to the old version of the Puerto Rican Festival or just going out onto Main Street or visiting schools; there was a lot of filling in the gaps and building bridges — and that’s been the way I approach my work to this day.”

Indeed, while Albano moved on from the Brightwood branch — she came to the central library in 1989 — she has continued to build those bridges, taking her service to the community far outside the library walls, while also making that institution a welcoming and responsive resource for city residents.

In her role as assistant director for Public Services of the libraries, she wears a number of hats — as well as an ‘Hablo Español’ button. She’s involved with a variety of human-resources functions, including hiring and recruiting, and as she recruits, she’s looking for individuals who embody what she calls a ‘turned-outward attitude’ with regard to the institution and how it must function.

Albano acknowledged that, overall, the library’s role within the community has changed somewhat over the past 30 years, and so have the duties of those who work there.

She can recall working on the reference desk decades ago and fielding a wide range of questions from callers who couldn’t simply Google things when they needed the answer to a pressing question. She remembers fielding queries on everything from stock prices on a specific date to the ISBN (International Standard Book Number) for specific titles so people could order them (now, they just go on Amazon) to Dr. Seuss and his history in Springfield.

Today, while there’s still a reference desk, the librarian spends less time behind it, and the questions are generally much different than those of a generation or two ago.

“People will ask how they can upload their résumé to a specific site, or how they can tell if a website is legitimate,” she told BusinessWest, adding that today, libraries, while still storehouses of books and information, are more community hubs than anything else.

When the Springfield City Library created a number of outreach teams several years ago, Albano was assigned — actually, she assigned herself — to lead the civic and community-engagement team.

The key word in that phrase, of course, is engagement, she said, adding that the group focused on connecting people with their city and getting them involved with government and the many issues impacting the community.

“A lot of people feel disconnected, and we wanted to do something about that,” she said, adding that, through partnerships with the Springfield Election Commission, the Secretary of State’s Office, the League of Women Voters, the Women’s Fund, and other groups, the library has helped stage ‘meet the candidates’ events and other informational programs.

“Speaking Spanish was a real help in not only communicating with people, but also getting out into the community, becoming part of it, and discovering what the people there wanted and needed — from the library and from life — so we could respond.”

“That was a heated debate moderated and filmed by Focus Springfield,” she recalled. “And it was released throughout the Commonwealth, so we had hundreds of views beyond the people in the room.”

In recent years, the library has coordinated a host of other programs, including one on how to run for office and what it’s like to serve in an elected position, she said, adding that 30 or even 20 years ago, it is unlikely that the city library would have been involved in such matters. Today, though, as part of its changing role, the institution is acting as (or much more as) a connector and a convener.

And Albano has been at the forefront of many of these efforts, especially with the Hispanic population and other often-underserved constituencies.

The Hispanic population is now quite large in Springfield, said Albano, adding that, in the public schools, at least 60% of the students are Hispanic. These numbers demand attention, she went on, adding that institutions across the city, including the library, need more than people on their staffs who can speak the language — although that certainly helps.

They need people who can connect with that population, advocate on its behalf, and connect people with resources.

The city’s response, and the library’s response, to the needs of those impacted by Hurricane Maria is a good example, she told BusinessWest, adding that staff members there helped with everything from attaining a library card to figuring out where to receive help with insurance matters, and host of other issues.

“We were always thinking about ways to make a stressful time, a very traumatic time, less stressful,” she said, adding that thousands of refugees came into this region, and most all of them needed help on many levels.

While the Hispanic population has been a primary focus of Albano’s time and energy, so too has been the subject of leadership and helping others develop those skills.

Which brings us, in a roundabout way, to Sonia Sotomayor’s historic visit to Springfield in 2015 as part of the Springfield Public Forum, an opportunity Albano said she ran with.

Indeed, she was able to obtain multiple copies of Sotomayor’s book in English and Spanish and set up a book-discussion group. She was also able to help arrange a meeting with the justice, the nation’s first of Hispanic descent, prior to her talk.

Sotomayor’s book is titled My Beloved World, and it, and the justice’s visit, inspired Albano to launch “My Beloved Springfield,” a now-annual program that brings in women leaders to tell their stories and lead a moderated discussion.

It’s simply one aspect of her broad efforts to help foster the next generation of leaders for this region, a role she takes very seriously.

“If you’re going to truly be a woman of impact, you have to pass things along,” she explained. “You have to make opportunities known to others, and you have to help them get there.”

As noted earlier, Albano hasn’t had to bring too many lawn chairs with her during her career. Indeed, she’s been given seats at a number of tables.

Thirty years after taking a job her mother would love, she has come to love everything about it, especially the many forms of outreach.

She loves those almost as much as being called an honorary Latina.