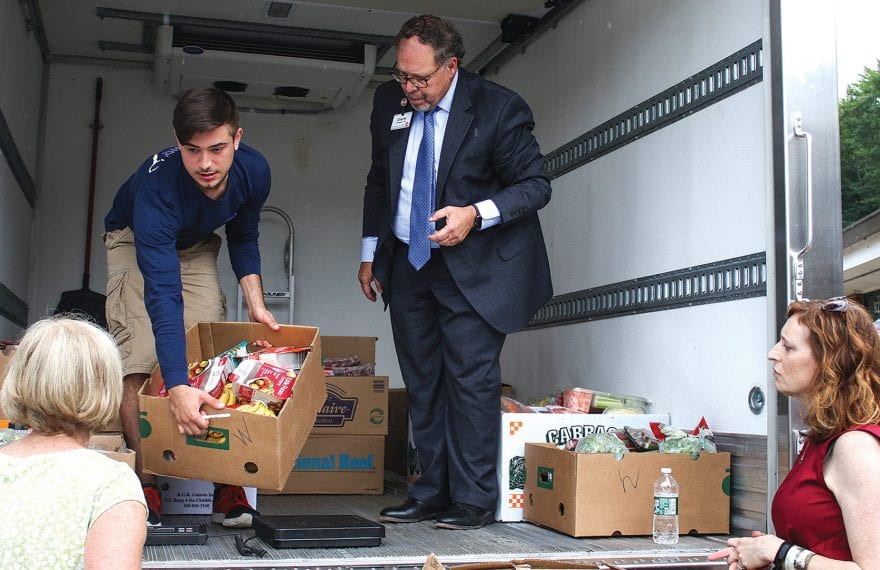 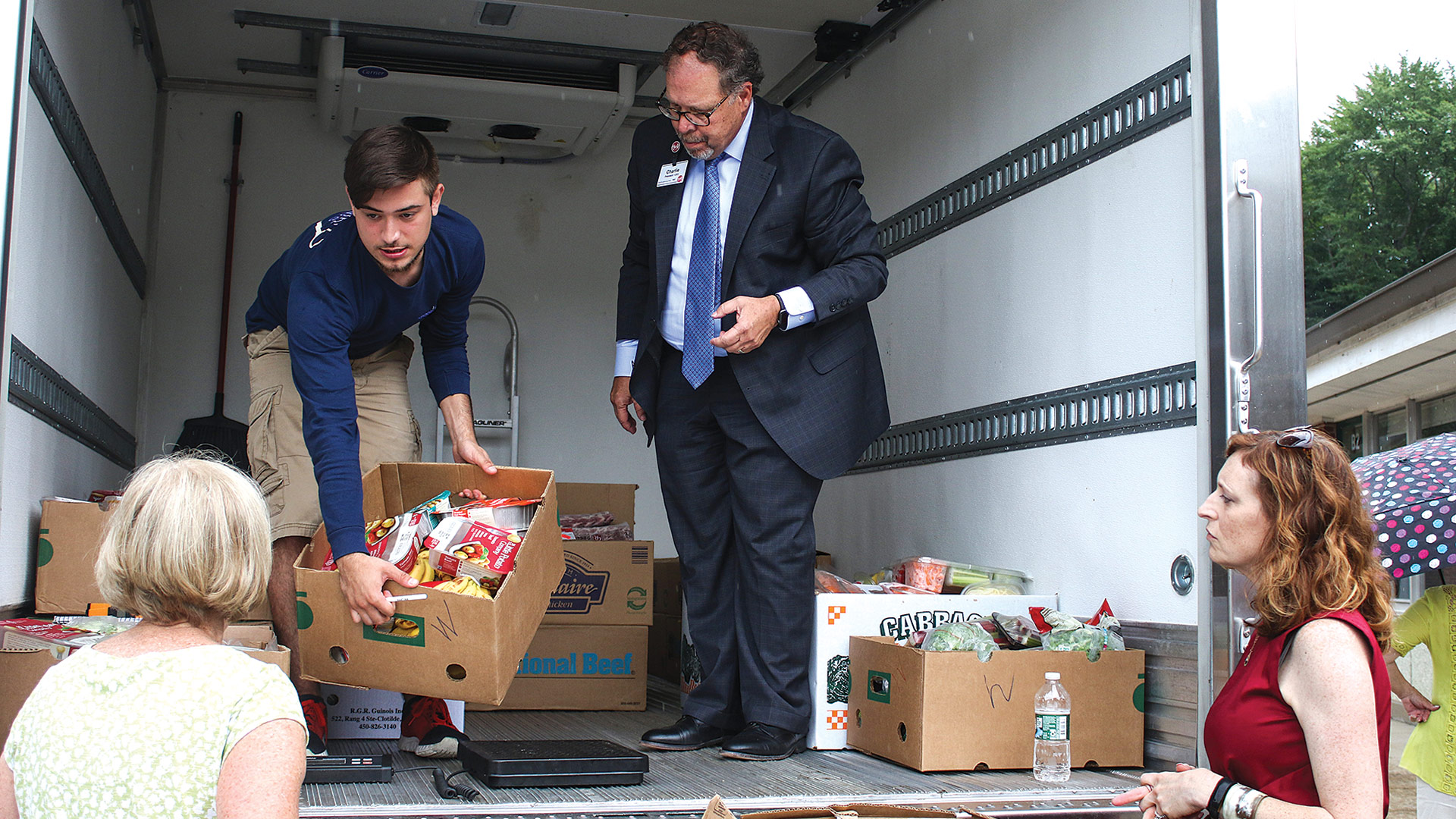 Hampden County has the highest rate of child food insecurity in the state of Massachusetts. In fact, more than 15% of children in the region may not know where or when their next meal will come from, and may lack access to enough food to lead an active, healthy life.

This is one of the reasons Lovin’ Spoonfuls, an organization dedicated to rescuing and distributing fresh food to communities in need, brought its project to Hampden County.

In explaining the significance of an elevated child food-insecurity rate, Lauren Palumbo notes that it not only affects those kids now, but may also negatively impact communities in the long term.

“You can’t expect these children to succeed in school if they’re not accessing adequate nutrition.”

“The challenging thing about food insecurity is that it often affects households with children at a much higher rate than it affects general households,” said Palumbo, the organization’s chief operating officer. “You can’t expect these children to succeed in school if they’re not accessing adequate nutrition.”

Palumbo told BusinessWest that Lovin’ Spoonfuls has been eyeing Hampden County for a couple years now, partially due to that high level of child food insecurity, and she hopes Lovin’ Spoonfuls can help aid those in need.

So far, Lovin’ Spoonfuls has rescued and delivered more than 13,300,000 pounds of food to nearly 40 cities and towns across Eastern Mass., she noted. “For us, it’s about growing regionally and serving the areas that have some of the greatest need, but our long-term goal is really to serve all of Massachusetts.”

Although it may not always be obvious, there is plenty of need in Hampden County.

Kathy Henry, food administrator at Friend’s Place Food Pantry in Springfield, serves up to 180 people and households on one of her two distribution days throughout the week. Monday is reserved for senior citizens age 60 or older, and normally draws up to 135 seniors, while Wednesday is open to all ages, and typically brings in up to 180 people or families. 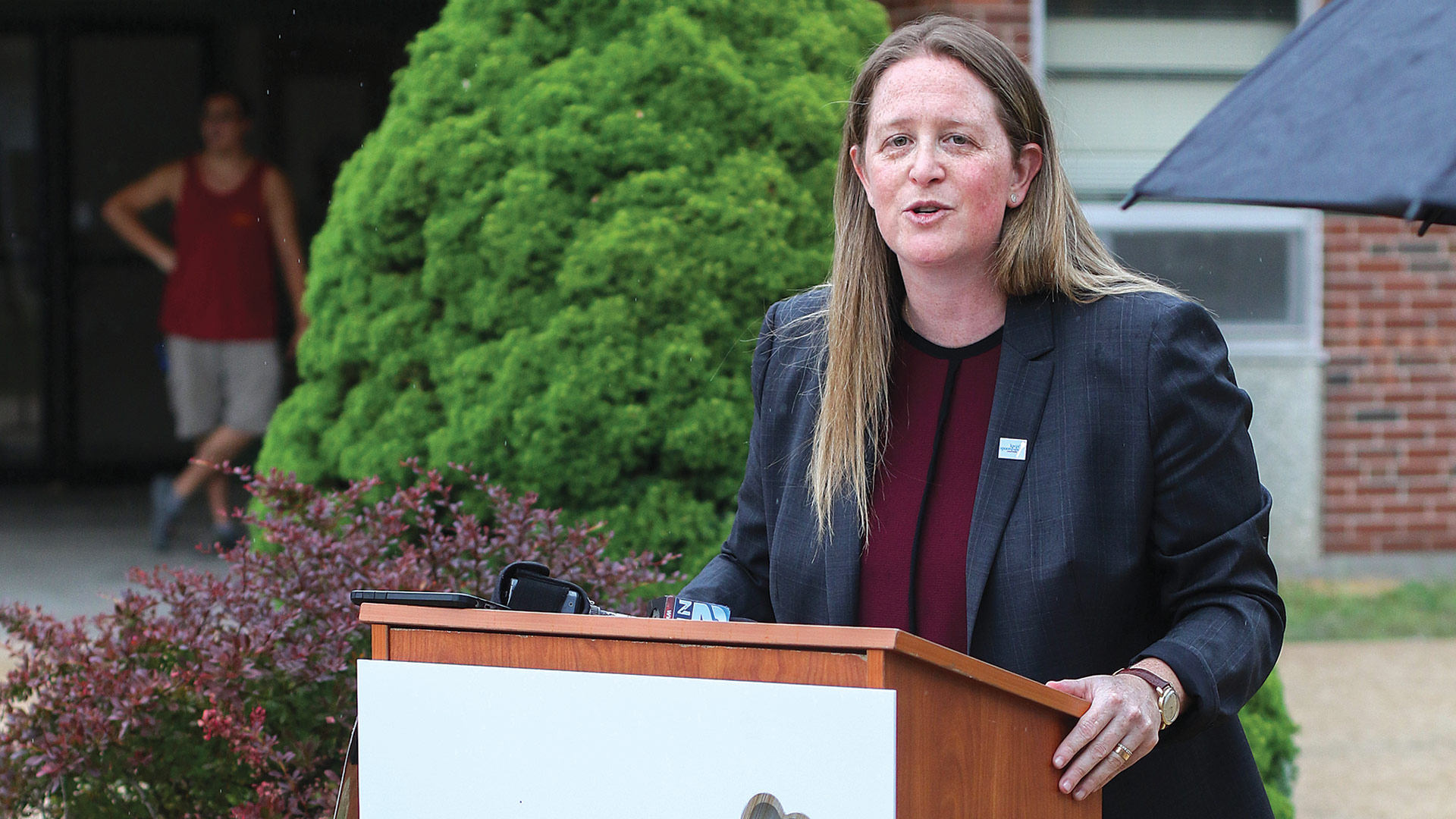 Founder and Executive Director Ashley Stanley kicks off the launch of Lovin’ Spoonfuls in Hampden County.

Henry said Lovin’ Spoonfuls reached out to her about delivering food right when she lost a few volunteers who used to pick up food for her.

“It was perfect timing that they stepped in,” she said. “I have no complaints. I greatly appreciate the service.”

Henry’s food pantry is one of 17 that Lovin’ Spoonfuls delivers to in Hampden County. The organization works to deliver food that would otherwise be wasted to nonprofits in Chicopee, East Longmeadow, Holyoke, Longmeadow, South Hadley, Springfield, and West Springfield.

The route in Hampden County is expected to rescue an estimated 10,000 pounds of fresh produce, dairy, proteins, and prepared foods from grocery stores in the region every week, including inaugural retail partner Big Y, whom Palumbo says has been a pleasure to work with.

“Oftentimes, it’s sort of a learning curve to get a business on board, but their team has been absolutely on board since day one and has been really consistent and amazing to work with,” she noted.

This proved to be true at the Hampden County launch of Lovin’ Spoonfuls on July 22, when Big Y President and CEO Charlie D’Amour was the first volunteer to jump in the back of the truck to help deliver food to Longmeadow Open Pantry.

“It’s not every day we get the president and CEO of a retailer into the back of a truck to move boxes,” Palumbo said.

At the launch, D’Amour said he’s always been troubled by the waste endemic to the supermarket business, and he’s glad there is now a way to use the extra food to serve those in need. 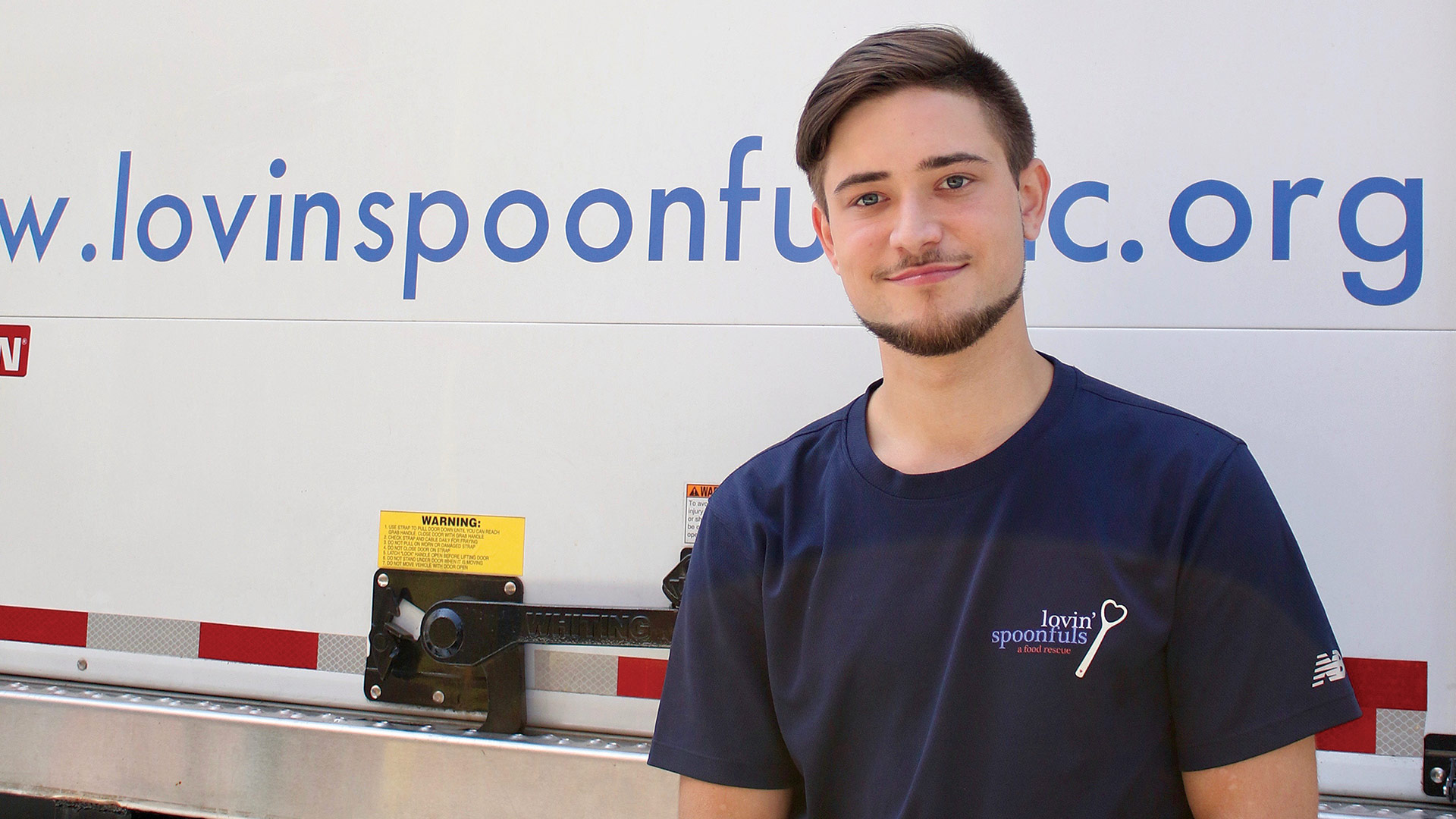 Tyler Crawford says working for Lovin’ Spoonfuls gives him the opportunity to give back to the community he grew up in.

“With Lovin’ Spoonfuls, we have a wonderful opportunity to connect that much more and in a very timely way,” he said. “It’s food rescue for a reason because it would just be going to waste, and there’s an opportunity to have it not go into the landfills, but have it go and do some wonderful good.”

Right now, Hampden County food dropoffs are run by driver Tyler Crawford, a 23-year-old who grew up in Springfield. He said he was looking for a way to give back to the community when he saw Lovin’ Spoonfuls was coming to the area. 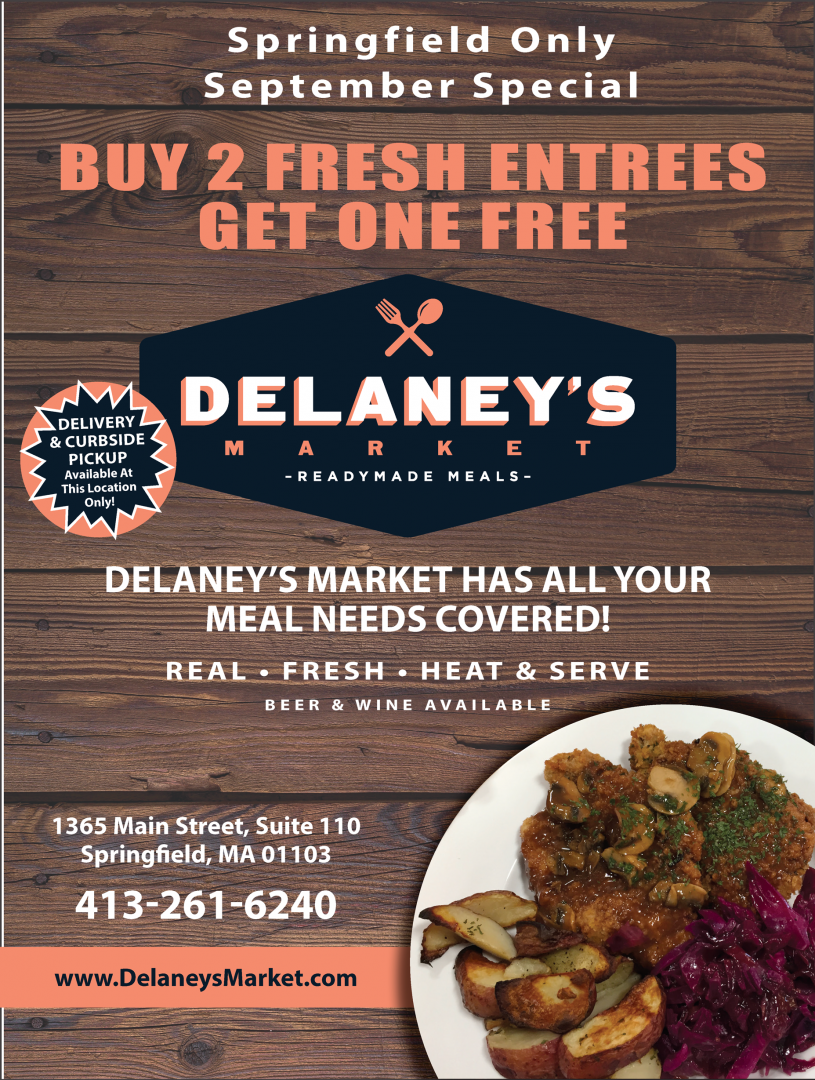 “I had been looking for something meaningful for work,” he said. “I don’t like just having a job to make money; I prefer to do something I’m passionate about, which is mostly helping people.”

But a dedicated team isn’t the only thing that makes what Lovin’ Spoonfuls does possible. Palumbo says it takes about $140,000 a year to run this operation, from staffing costs to training right down to the truck itself.

“The real lift is, obviously, making sure that we have the funds in place to stay and make a strong commitment to the community,” she said, adding that the last thing she wants to do is enter a community and have to pull back if the funding is not there.

“With Lovin’ Spoonfuls, we have a wonderful opportunity to connect that much more and in a very timely way. It’s food rescue for a reason because it would just be going to waste, and there’s an opportunity to have it not go into the landfills, but have it go and do some wonderful good.”

If operating at full capacity, each truck can rescue up to 600,000 pounds of food a year, adding up to more than 3 pounds per dollar for the cost of operating the vehicle.

“There is not a single county in this country that is not wasting food,” she noted. “So much energy goes into producing and transporting food, and then to throw 40% of it away, you’re wasting the resources and the human labor and all of the effort that went into doing this in the first place. For us, it’s an environmental issue as well.”

The most important impact, however, may be on the thousands of people who are food-insecure across the state.

“This is not a problem of supply. Hunger has been a problem in this country for a number of years, but it is not a question of us not having enough food,” Palumbo said. “We produce more than enough food to feed everyone, but it’s about getting it to them.”