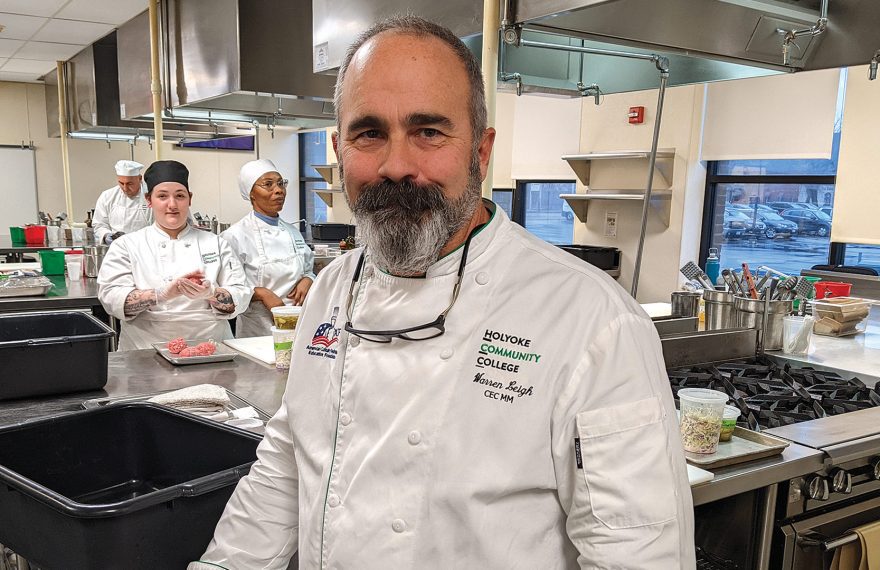 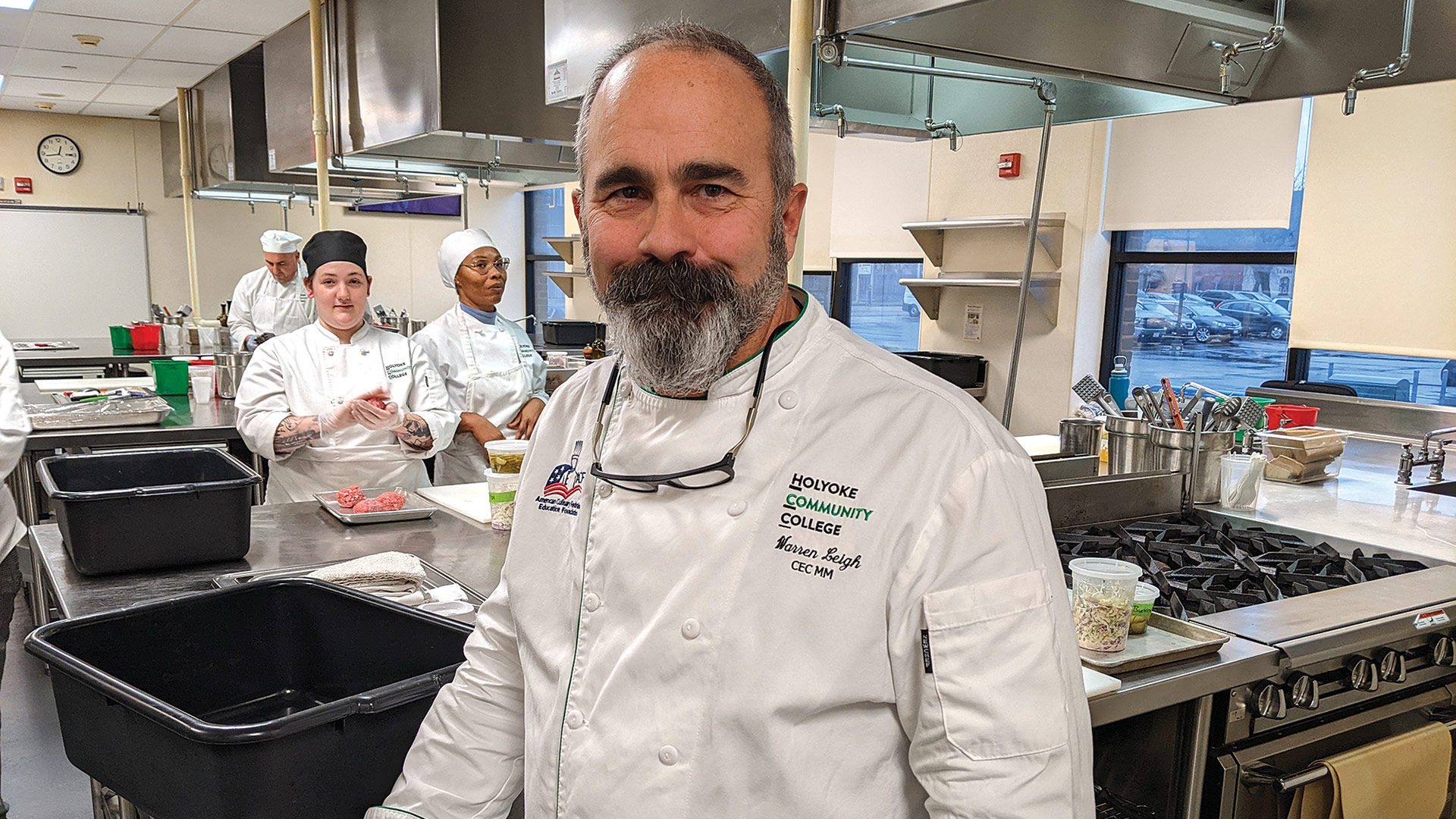 Restaurant work is not easy.

Maureen Hindle knows that, having graduated from Holyoke Community College’s (HCC) Culinary Arts program in 2013 and working as a sous chef before returning to work in the HCC program about seven years ago as a lab technician.

“It’s a challenging industry, but it’s all passion-based, and I think that’s a huge thing,” she said. “Our students come here because they have a passion for cooking, and they want to grow that, and this is a good place to do that. And we wouldn’t continue to work in the industry in some capacity if we didn’t love it as well.”

By ‘we,’ she meant the team at the HCC MGM Culinary Arts Institute, which occupies the first two floors of the Cubit building in downtown Holyoke. The $7.5 million, 20,000-square-foot, state-of-the-art facility opened in January 2018, so it will soon mark five years of growth and innovation, which included weathering the pandemic.

Chef and Professor Warren Leigh, who co-chairs the Culinary Arts program, said he’s surprised enrollment isn’t even higher, given the opportunities available in a restaurant industry that’s crying out for workforce help.

“Our students come here because they have a passion for cooking, and they want to grow that, and this is a good place to do that. And we wouldn’t continue to work in the industry in some capacity if we didn’t love it as well.”

“They can’t find employees,” he told BusinessWest. “Nobody knows why we’re not packed to the gills; we should be turning students away, but it’s not happening. Every industry is looking for employees, and especially hospitality. Most all the restaurants are hiring for some position.”

The fall enrollment numbers were encouraging, however, and spring looks strong as well, perhaps because more students are hearing about the needs in a field where pay typically starts in the high teens per hour and can move quickly into the twenties as they move into higher responsibilities. “There is that ability to grow, so you’d think they’d be busting down the doors here.”

Degree programs at the center have been described as ‘stackable.’ Students can choose a one-year certificate program in culinary arts, and if they want to go further, they can enter the associate-degree program and essentially build on what they started.

With that associate degree, a student could transfer to, say, Johnson & Wales, the Culinary Institute of America (CIA), or any college that offers a four-year program in the culinary field. But most of the time, they don’t pursue more education, because of the career opportunities already open to them. 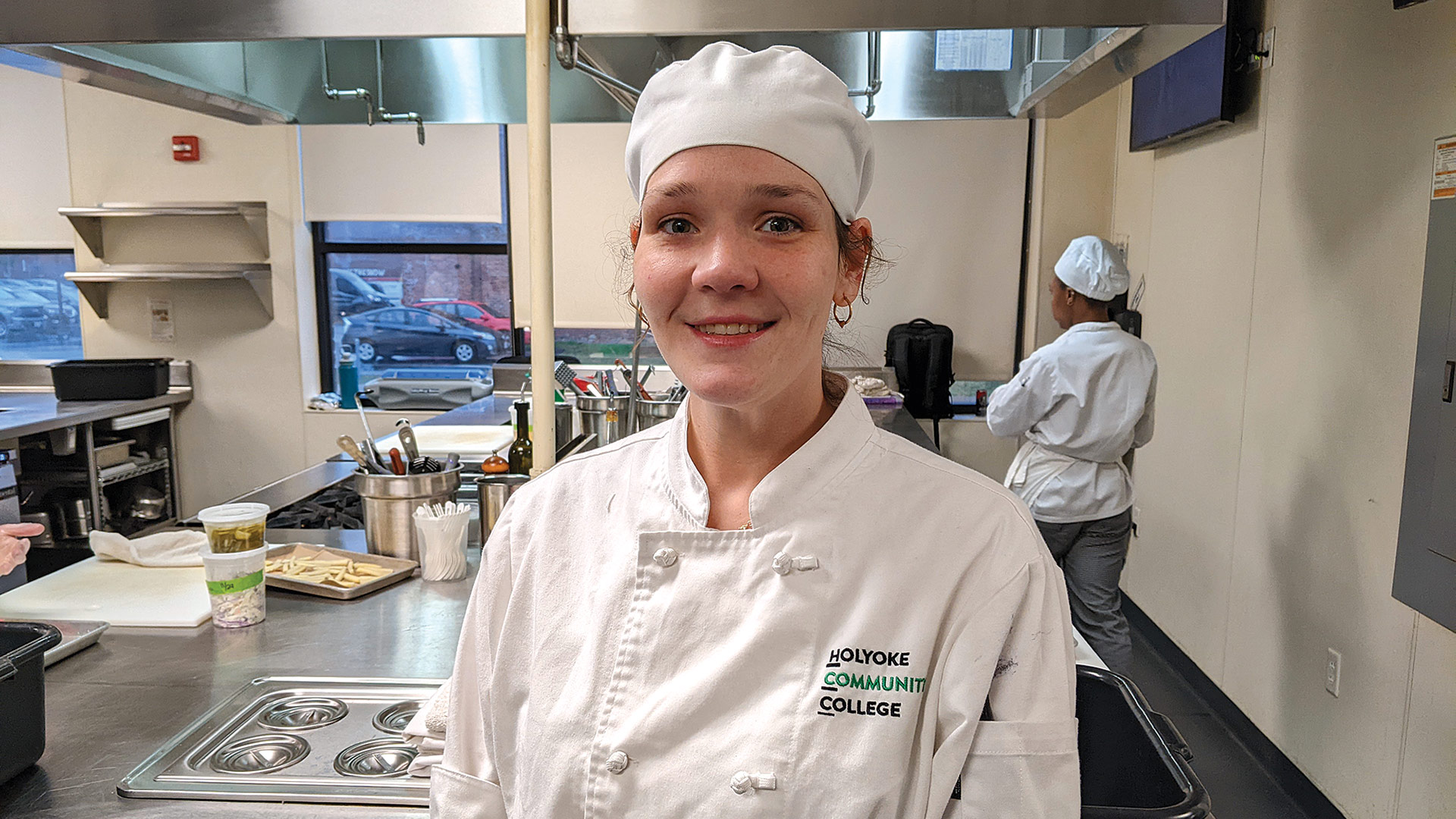 “Most of the time, they want to get their degree and go to work. That’s what we see,” Leigh explained. “The question is always, are you getting your money’s worth for this? Compared to other four-year schools and culinary schools, community colleges are inexpensive — a great value. And what we’re seeing is the students who have the associate’s degree tend to wind up in supervisory positions.

“The students who do the two-semester certificate and stick with it also end up moving fairly quickly, but most of the supervisors out there who are alums have associate degrees,” he went on. “That doesn’t mean if you don’t have an associate degree, you won’t get a supervisor’s job. Some of those have made it to some level of supervision, absolutely.”

At a time when career stability is important to so many, enrolling in the Culinary Arts Institute is certainly an attractive option.

The institute represents a big step forward in the realm of workforce development within the culinary-arts field, both locally and regionally, a segment of the economy that was already growing and now faces even greater pressure to retain workforce in the post-pandemic era, beset by the Great Resignation at the same time when most people have returned to their old dining-out habits.

“Every industry is looking for employees, and especially hospitality. Most all the restaurants are hiring for some position.”

There has a been a culinary-arts program, in one form or another, at HCC for about 35 years, though the program was more hospitality-related than culinary-focused years ago. It has had several homes over the years, none of them large or particularly well-equipped.

The facility at the Cubit, however, features a fully equipped demonstration kitchen; a production kitchen set up European-style, with the student chefs facing each other and communicating with each other as they work together to prepare a meal; two teaching kitchens; a bake shop; classrooms; a student lounge; and an 80-seat dining facility to host events. As a broad hospitality program, it also maintains a hotel lab with a mock front desk and bedroom.

Hindle, whose role includes food ordering, making sure classes run smoothly, supporting the students and instructors, and more, has seen the program and its physical home evolve since she graduated more than a decade ago, and she’s beyond impressed. 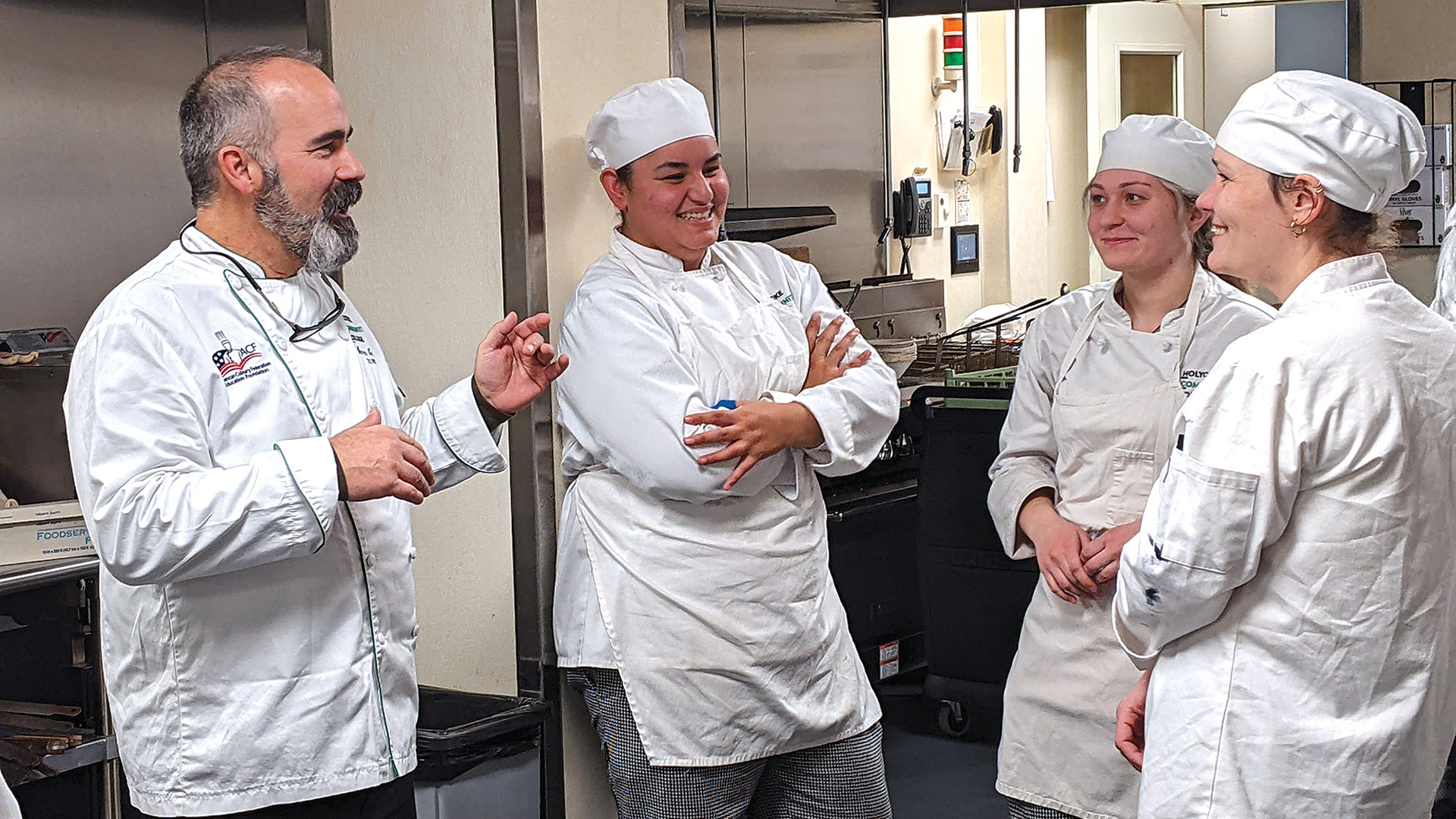 Chef Warren Leigh speaks with students at the start of a class.

“It’s incredible. We went from one and a half kitchens to five. So that in itself is huge growth for us,” she said. “But seeing the students able to use this equipment, versus what we had when I was a student, it’s just incredibly beneficial to them because this is what they’re using in the industry. We’re not shoving six students around a range. In fact, this is better than they would see in most industry kitchens; they can learn on the best equipment possible.”

Briana Marizan is one of those current students, working toward her associate degree.

“I came here because I want to be a chef. I want to perfect my craft and then move up,” she said, adding that instructors are sensitive to the learning and work styles of each student. “Each chef brings something unique to the table, and they teach us not only what works best for them, but also what might work best for us.”

As part of its mission to support the region’s hospitality industry, the institute also regularly runs free, eight-week line-cook training and certification courses. Participants learn all the essential competencies they need to become successful line cooks: knife skills; how to prepare stocks, soups, sauces, desserts, poultry, fish, and meat; culinary math and measurements; moist- and dry-heat cooking methods; as well as workplace soft skills, such as building a résumé and presenting themselves at job interviews.

Maria Moreno Contreras, a culinary instructor who was administering a midterm test to one of those classes the day BusinessWest visited, said some participants are already in the industry and want to upgrade their skills, while others are exploring a possible new career in a high-demand field.

“With the non-credit training, many of them getting ready to get a very entry-level job, or it’s exploratory to see if they even want to go there,” Leigh said. “Their endgame is to get a job — but that’s everyone’s endgame here.”

Five years since opening its new headquarters, HCC’s Culinary Arts program is evolving in some intriguing ways. For instance, it was awarded a $147,000 Skills Capital Grant by the state to purchase a truck that will be used as a mobile kitchen for community outreach and education.

“The mobile kitchen has nothing to do with raising income,” Leigh said, noting that it’s not going to set up on the corner and sell tacos. The main purpose is to engage the community while giving students experience in food-truck operations.

According to the award letter, HCC will use the $147,000 to purchase and outfit a mobile food lab that will support both credit and non-credit culinary-arts programs and also incorporate other areas of study, including nutrition, health, business, and entrepreneurship. HCC’s grant application notes that residents of Holyoke face a high level of food insecurity and that downtown Holyoke has been identified as a ‘food desert.’ 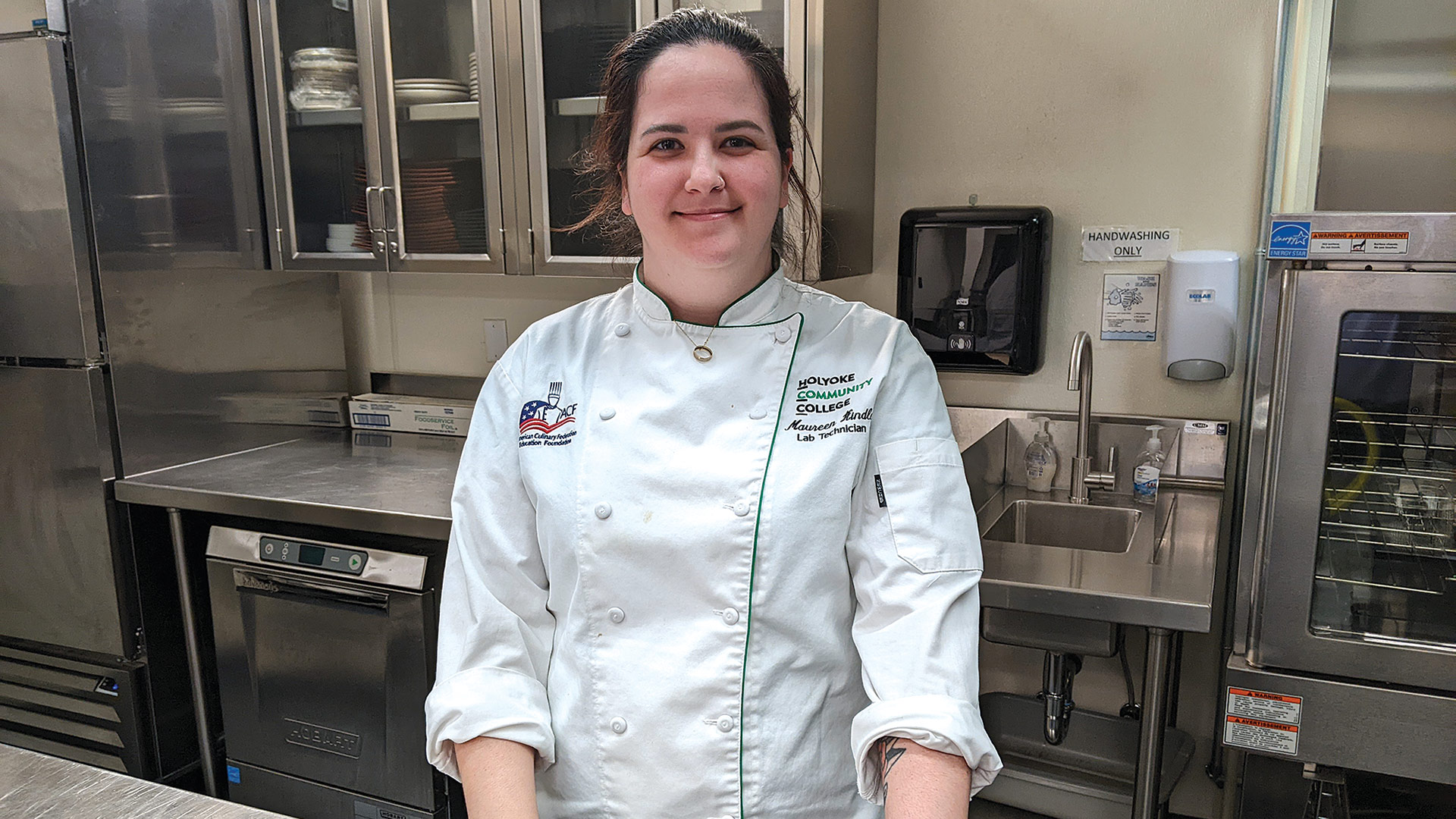 Maureen Hindle says the state-of-the-art facilities are a far cry from what she used as a student more than a decade ago.

“HCC will deploy the truck to bring food to neighborhoods of downtown Holyoke,” HCC wrote in its application. In addition, the college plans to connect this project to its downtown Freight Farms initiative with a focus on basic nutrition, local produce, and healthy eating.

Leigh envisions using the mobile food lab to engage community partners such as the Holyoke Boys & Girls Club and area food pantries. Students will meet with representatives from area organizations to create menus based on ingredients of their choice or what might be seasonally available.

Food trucks are one way to enter the industry more inexpensively than opening a brick-and-mortar restaurant, he added, citing the example of HCC culinary arts alumna Nicole Ortiz, who wrote a letter in support of the grant and started her own culinary career with her Crave food-truck business. She now also runs Crave restaurant on High Street in Holyoke.

Leigh also said the institute is working with Holyoke Medical Center on putting together some professional development for nurses and nutritionists, planning to package it as a non-credit course with possible grant support.

The facility also recently partnered with the Boys & Girls Club by helping lay out its new kitchen and hosting the club’s eighth-graders at the Cubit.

“We’re trying to be a community partner,” Leigh said, adding that the school started preparing Thanksgiving to-go packages — everything but the turkey for a family of four — to raise money for the President’s Student Emergency Fund at HCC, which assists thousands of students with basic needs.

The program is reaching out to the community in other ways as well, such as a plan to offer professional-development opportunities for culinary-arts teachers in several vocational and technical schools in the region. “It would clearly cost less than at Johnson & Wales or CIA,” he noted. “But maybe we can get grant funding for it.”

At the same time, Leigh and his team are trying to be more purposeful in recruitment, an ongoing effort, as he said, to get the HCC MGM Culinary Arts Center “packed to the gills.”

“We’re trying to tag-team a faculty member and an admissions person and go to those six or eight voke-tech schools, and we’ll try to do the same with the non-culinary students at the other high schools,” he said. “They might only hear about Johnson & Wales and CIA, where the price starts at $50,000 or $60,000.”

With the need for culinary talent more critical than ever before, and the cost of a community-college education within reach for most, he hopes HCC has a winning message for those young people.

As Hindle said, the work isn’t easy, but it’s a field where those with a passion can thrive.