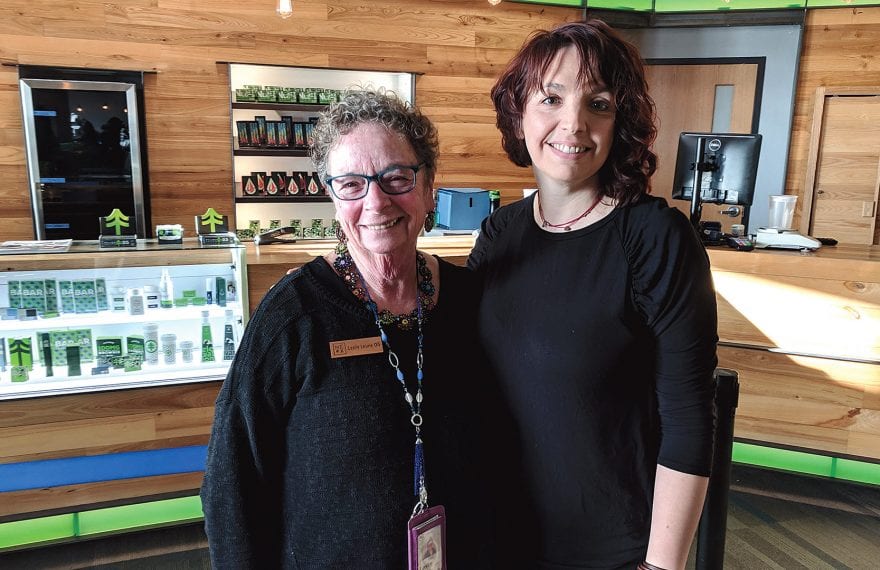 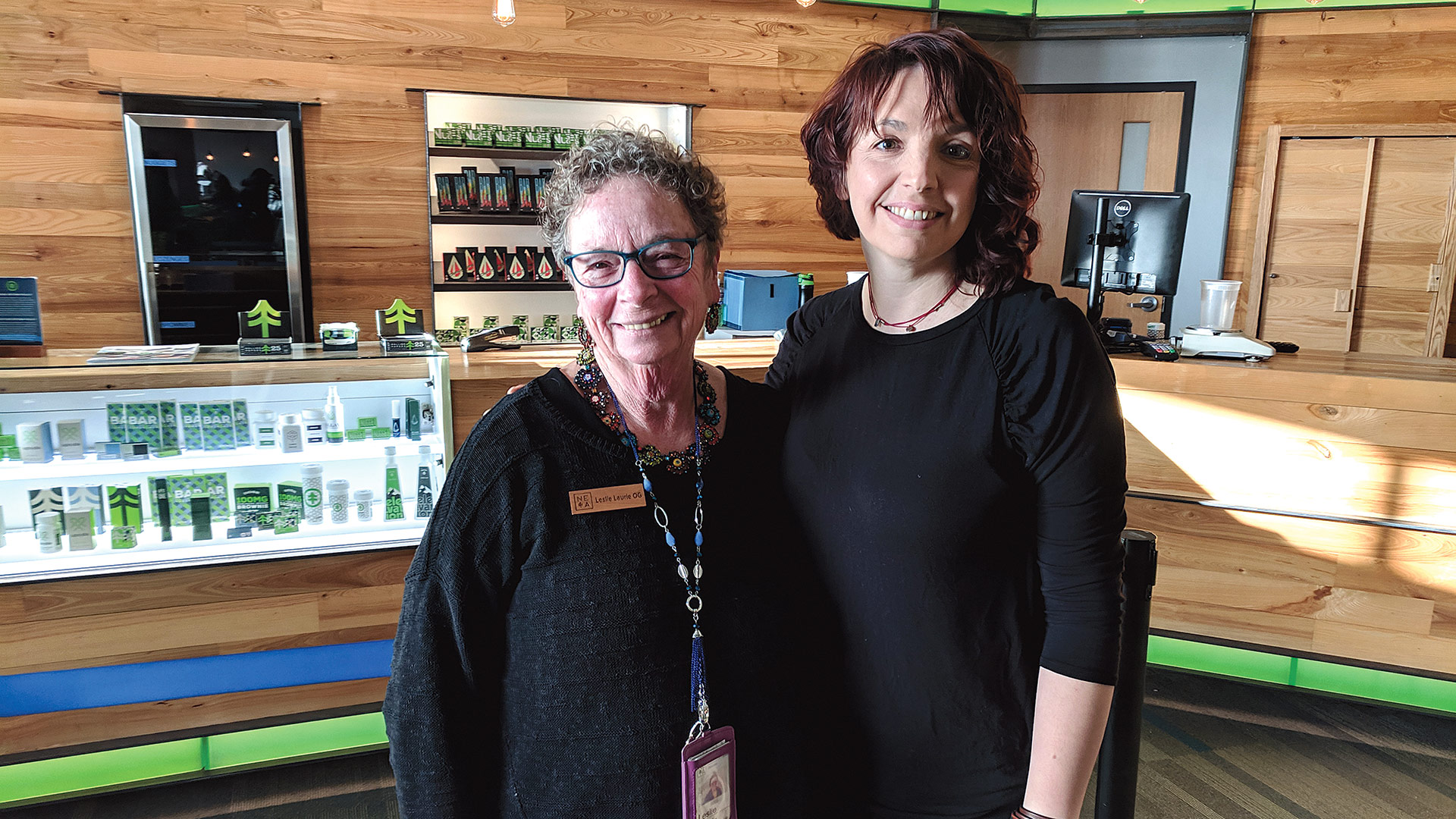 It’s been an eventful six years since voters first approved marijuana sales to treat medical conditions back in 2012. From that vote sprang New England Treatment Access (NETA) three years ago, and last month, the dispensary became one of just two stores in Massachusetts selling cannabis products for adult recreational use as well. NETA’s co-founder says the company has proven itself to be a good neighbor and an economic driver — and promises to be even more so in what is certainly a bold new era for marijuana in the Bay State.

When Kevin Fisher came to Massachusetts to help launch a medical-marijuana dispensary, he was already a veteran of the industry in Colorado, with plenty of passion to boot.

Fisher’s family, like so many others, has been struck by cancer, he said, and the idea — first as owner of Rocky Mountain Remedies in Colorado and then, starting in 2015, as co-founder of New England Treatment Access (NETA) — was always to draw in people with chronic and even terminal illness who may consider cannabis a viable therapy.

By the time NETA opened its doors in Northampton and Brookline, the anecdotal evidence for the drug’s effectiveness had been well-established elsewhere, he noted.

“We knew patients were using these therapies for a broad range of conditions,” Fisher told BusinessWest, before praising the law crafted after voters approved legalized medical marijuana in 2012.

“In Massachusetts, they got it right. Instead of legislators playing physician, the law granted physicians the freedom to make recommendations as they saw fit. It was important to maintain the sanctity of that patient-physician relationship. And we wanted to make sure we would provide quality products for patients to meet that broad range of conversations with physicians.”

Now, another law has significantly altered NETA’s business model. On Nov. 20, the company’s Northampton site, as well as Cultivate Holdings, LLC in Leicester, became the first facilities in the Northeast to sell marijuana to the public for adult recreational use.

“We call the individuals who interact with customers our ‘customer service associates.’ We require vigorous training before they’re out on their own, interacting with customers.”

At a press event after the state’s Cannabis Control Commission gave the go-ahead, Amanda Rositano, NETA’s director of operational compliance, said the shop is “beyond thrilled to be a part of this historic moment when NETA Northampton finally gets to open its doors to adults over 21 to provide safe, legal, and regulated cannabis to the people of Massachusetts.”

It’s certainly a welcome shift for many in the Valley, but it comes with challenges — concerning consumer safety, public perceptions, even traffic on Conz Street, which backed up significantly at certain times in the days following Nov. 20. But Fisher said NETA has long been preparing to meet them. 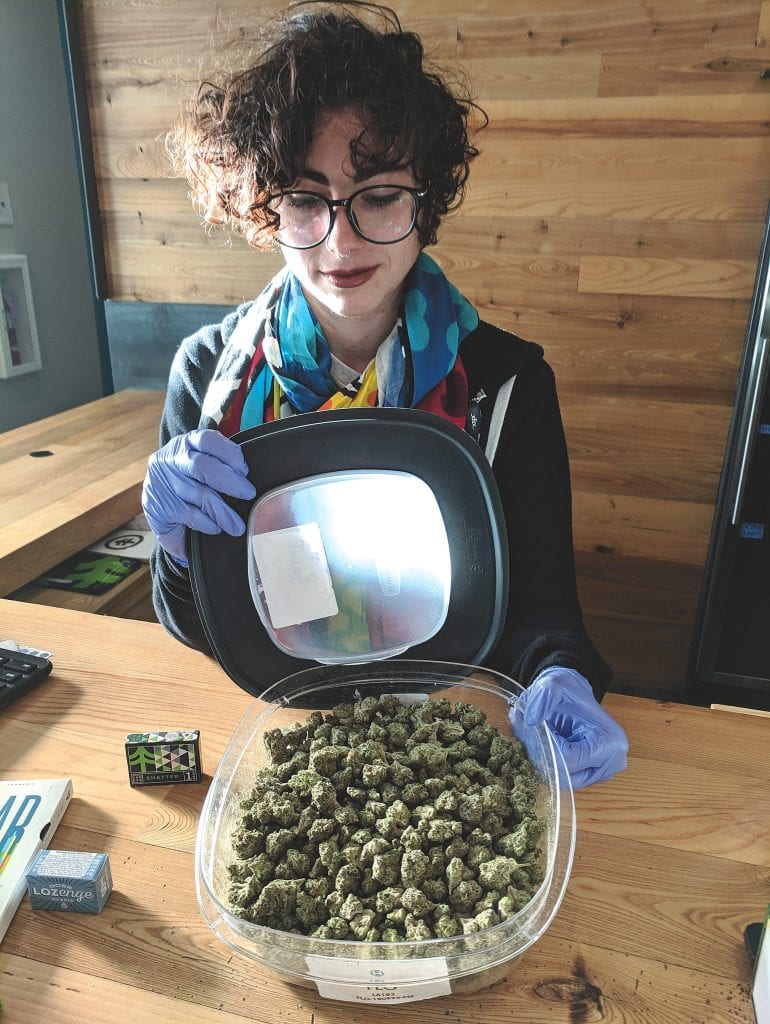 Hannah Rosenbaum, one of NETA’s patient service associates, with some of the ‘flower’ available for purchase.

Early on, for example, the organization brought in Leslie Laurie, former head of Tapestry Health and a long-time expert in public health in Western Mass., as its regional director. “She had expertise we could benefit from, a perspective on patients’ needs in Western Mass.,” Fisher said.

The founders also assumed — correctly, as it turned out — that the progressive culture in Northampton would prove welcoming to a dispensary that first sold cannabis products to a patients with prescriptions, and, now, to any adult with an ID.

“We felt [Northampton] was the place to go, and the process was pretty smooth,” he added. “I’m thankful for Leslie; she brought a credibility to our organization and the relationships we built with government and law enforcement. And we’ve only continued to build those relationships during the adult-use licensing, because they could appreciate the solid community partners we have been.”

Opening a medical-marijuana dispensary in Brookline, however, was a “whole different beast,” Fisher noted. “There were about 100 meetings required — some open to the media and the public, many with public officials … just meeting after meeting, a lot of hand-holding and reassurance. It was a very rigorous process.”

Despite that tougher road than the Northampton one, NETA felt affirmed when its license with Brookline came up for renewal after the first year. “The town said we didn’t even need to show up for the hearing; it was guaranteed. It made us feel like we had operated in the way we had promised.”

By contrast, Northampton was always a smoother fit, and is currently the only NETA site approved for recreational sales, as the licensing process continues in Brookline.

“A significant portion of the population embraces cannabis use,” Fisher said of the Paradise City, adding that NETA has never taken that goodwill for granted. “We did recognize the traffic and public-safety issues, and the fact that those needed to be carefully managed in a collaborative way.”

Time will tell if issues arise, of course, but for now, Fisher is pleased with the business — customers are still waiting in line most days — and NETA’s continued growth as what he calls a true community partner.

The Ayes Have It

In 2016, four years after the similar vote on medical marijuana, Massachusetts residents voted to legalize recreational sales to adults age 21 years and older. If they present a government-issued ID (such as a driver’s license, ID card, or passport) for verification, customers may purchase up to 1 ounce of ‘flower’ or 5 grams of concentrate. Certain potency restrictions, including a 5 mg serving-size limit for ‘edibles,’ apply to non-medical products.

“A significant portion of the population embraces cannabis use. We did recognize the traffic and public-safety issues, and the fact that those needed to be carefully managed in a collaborative way.”

However, Fisher was quick to note that, with the introduction of recreational sales, NETA’s medical-marijuana patients will remain the shop’s priority. Patients with prescriptions have their own lines, and at least 35% of each day’s inventory is reserved for patients. In short, the customer experience has not changed for people seeking to fill scripts.

As for those waiting in line for recreational sales, Fisher said it typically takes 20 to 30 minutes to get through, but technology is available to shorten the wait NETA uses a reserve-ahead app to view the daily menu, reserve an order online, and have it ready for pickup at a certain time later that day. In addition, for people looking to gauge the wait at any given time, NETA offers continuous live wait-time updates on its website.

It has also doubled customer service staff and remodeled the stores to offer nearly twice as many service stations.

Also ramped up are efforts to educate customers about cannabis products — a key factor, considering that many users are likely to be inexperienced.

“We call the individuals who interact with customers our ‘patient service associates,’” Fisher said, noting that he prefers that over the flip industry term ‘budtenders.’ “We require vigorous training before they’re out on their own, interacting with customers.”

That training — about two months worth — includes everything from understanding the core components of cannabis products to encouraging new users to ‘start low and go slow.’

“That’s a message we drive home again and again to our PSAs and our customers. There will always be more cannabis. So find out what works for you and what doesn’t, and start easy so you don’t have negative outcomes.”

In addition to the ‘low and slow’ guidance, NETA’s consumer-education materials emphasize elements like a ‘what product is right for me’ guide; advice against driving or using heavy machinery under the influence, public consumption, and traveling across state lines; a potency and tolerance tutorial, safe storage; and recognizing substance-abuse signs and identifying resources for additional help. 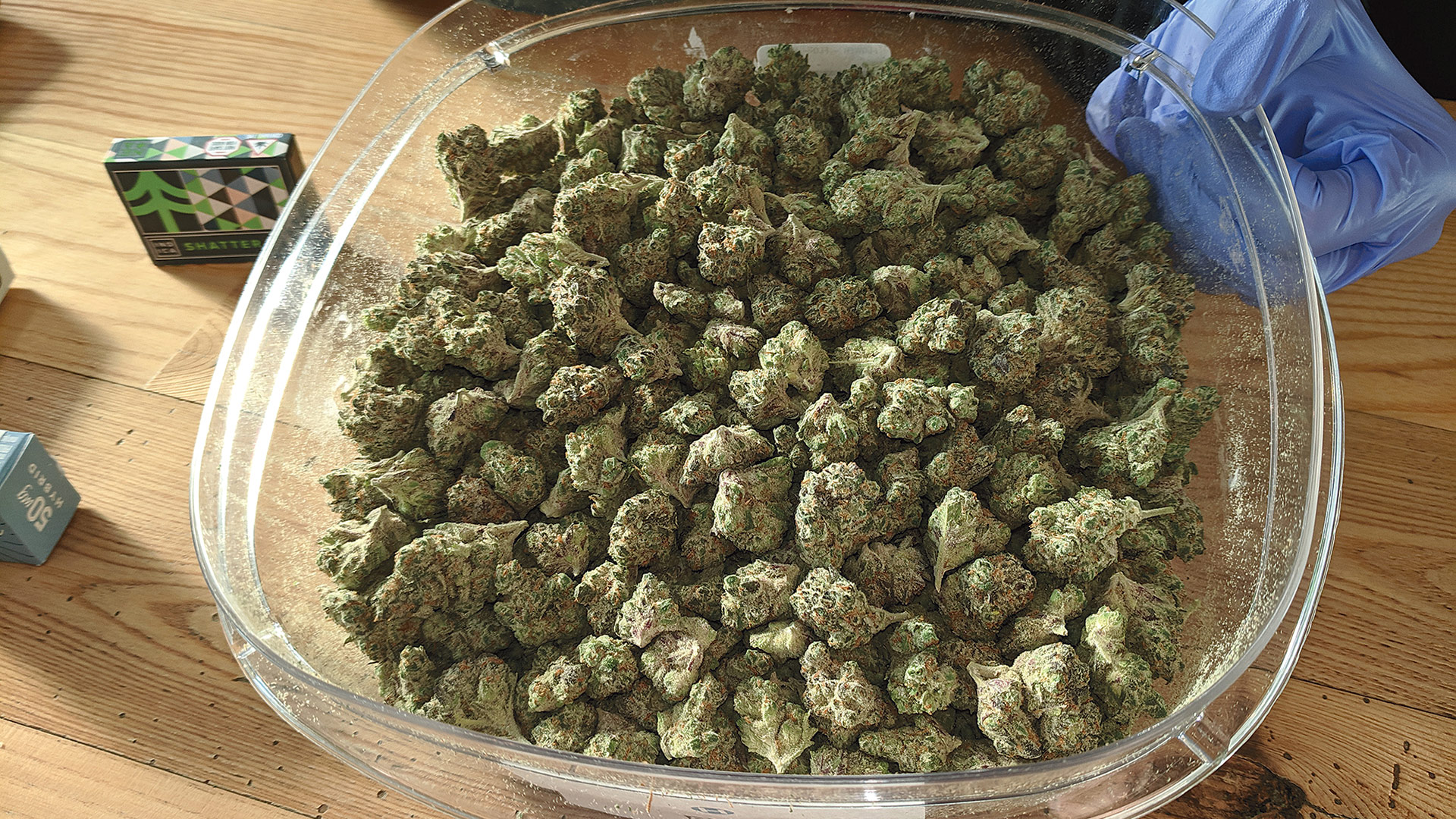 Recognizing that some of the opposition to legalized marijuana came from individuals concerned about products getting into children’s hands, all NETA product packaging is child-resistant and labeled with revised warnings and clear information to ensure that people can identify edible products as marijuana-infused and not safe for children.

In addition to training staff to emphasize responsible consumption when interacting with consumers, NETA has retained a full-time training coordinator to continuously develop and manage retail-staff training.

Understanding dosage levels is is important, Fisher said, as are reminders that the effects differ between smoking marijuana and ingesting edibles. In the latter case, “you could see a delayed onset, so don’t eat that whole bag if you don’t feel it’s working. That sounds like simple advice, but it’s a big deal for us.”

As it is for the Cannabis Control Commission, which encourages prospective customers to know the law and consume responsibly.

“This signal to open retail marijuana establishments marks a major milestone for voters who approved legal, adult-use cannabis in our state,” Chairman Steven Hoffman said last month. “To get  here, licensees underwent thorough background checks, passed multiple inspections, and had their products tested, all to ensure public health and safety as this new industry gets  up and running. As patrons look forward to visiting Massachusetts stores, we hope they will do their part by first familiarizing themselves with the law and understanding what is required of responsible consumers.”

Beyond Northampton and Brookline, Fisher said, NETA’s cultivation facility in Franklin — which has nearly doubled its capacity in anticipation of adult use — continues to invest heavily in research and is developing a pipeline of products designed to improve customers’ experiences and address specific medical conditions and symptoms.

And, make no mistake, even though adults can buy cannabis products without a doctor’s prescription, he added, it still makes sense to receive and renew certification as a patient — not just because of the lessened wait to be served, but because patients also avoid the 20% tax on adult-use sales, and can access a yearly voucher program to help offset the cost of being certified.

He’s also excited about the potential in Massachusetts, considering the scientific and medical resources available locally, to continue researching the benefits of marijuana from a medical perspective. “Clearly, we’re going to get more research; we have some of the brightest minds in the world of healthcare here in Western Mass.” 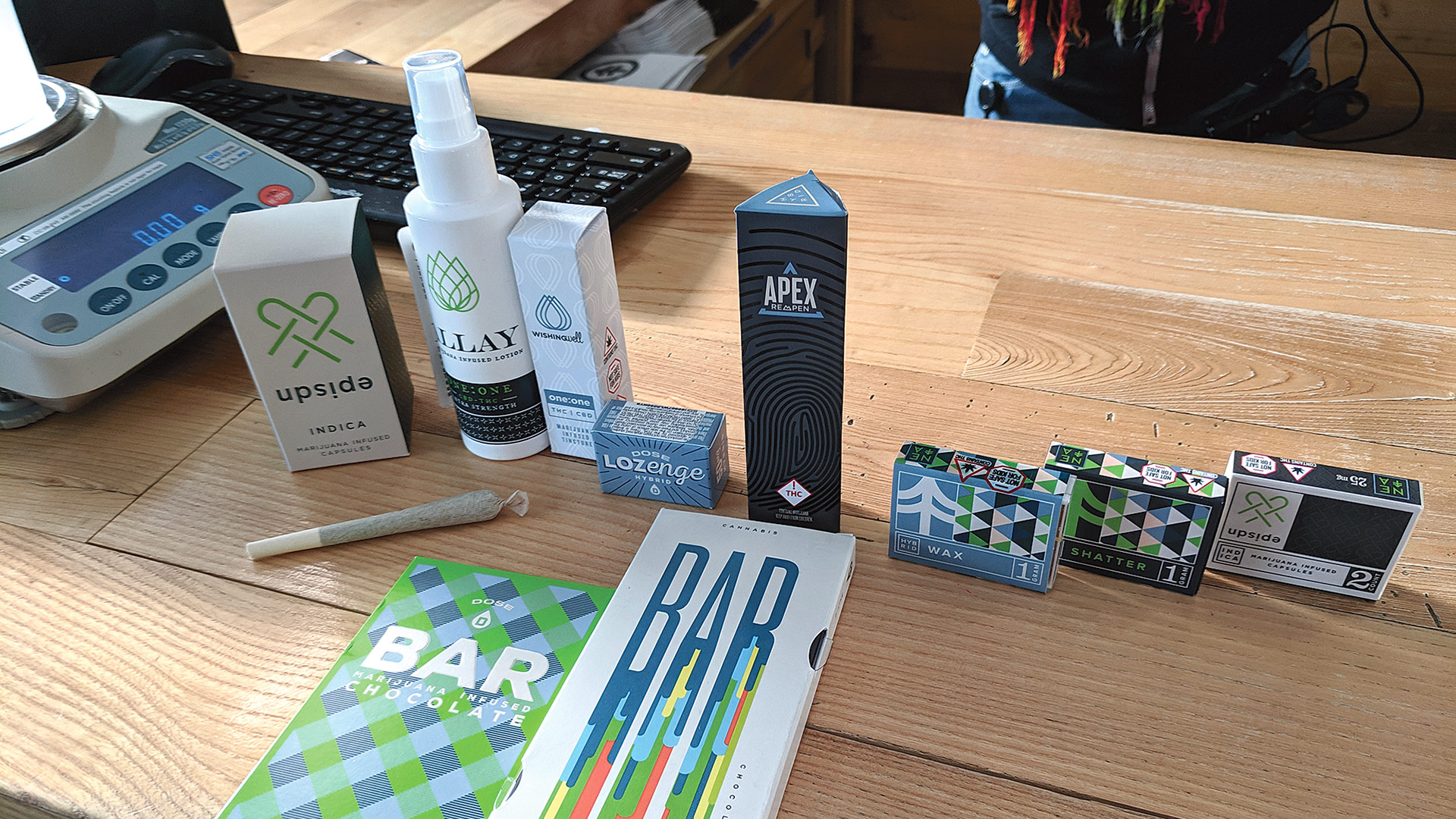 NETA’s products for sale include not just smokeable flower, but marijuana-infused capsules, lozenges, lotions, chocolate, and much more.

Overall, Fisher is a believer in the benefits of this industry, in terms of healthcare, quality of life, and economic benefits, like taxes paid and workers hired. The company employs close to 600 people, more than 100 in Western Mass. alone.

“Billions of dollars are spent yearly in this country [on marijuana], so by regulating it, there’s economic impact that can be realized, taxes to be paid, safety measures put in place … you’re not in someone’s car in an alley.”

And for adults who have no particular health condition but simply want to partake as an escape from life’s stresses, well, he believes there are far worse alternatives for that.

“That’s not to encourage broader consumption of cannabis, but let’s normalize it so parents can talk to their kids about it,” he told BusinessWest. “In Colorado, where it’s a mature industry, the youth rates have gone down. It’s just less cool for kids. There’s more open dialogue. Parents are having more discussions about it.”

And, he was quick to add, that guy selling pot on the corner, in states where it remains illegal, doesn’t check an ID like a responsible dispensary does.

“We’re bringing it from the darkness into the light and realizing a lot of positive outcomes,” he said. “On balance, this is a good thing.”