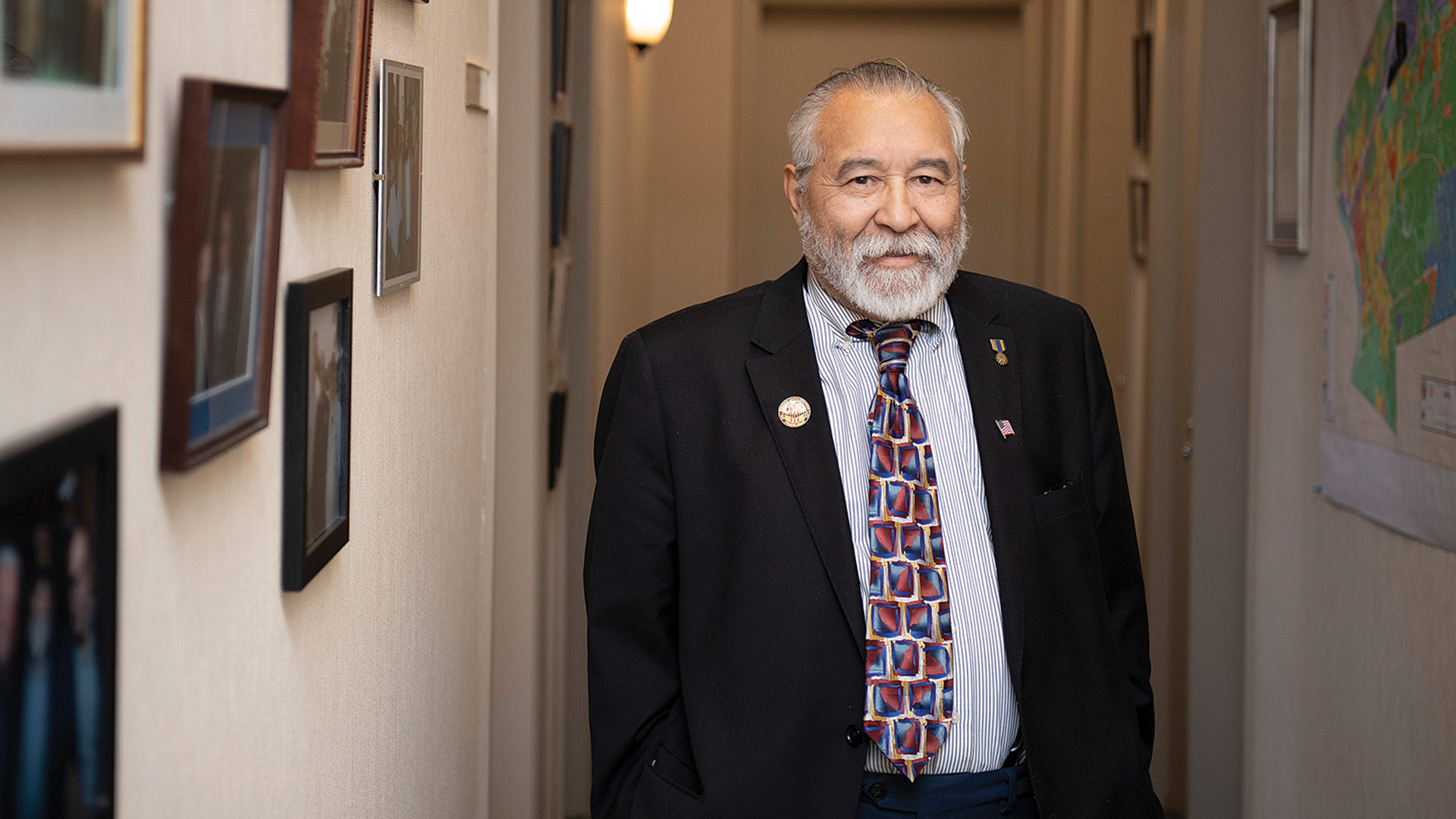 Herbie Flores could have become hardened, even embittered, by a tumultuous youth.

Instead, he’s spent a lifetime helping people overcome their own difficulties.

“I came from a very poor family in Puerto Rico,” he said, raised by his mother early on after his father died. “At some point, my uncle told my mother and sister it would be better if I had a male role model. That’s a cultural thing. So I ended up in Delaware with my uncle, who was a hardworking guy.”

Back in the ’60s, Delaware wasn’t the liberal bastion it is today, as it grappled, as all states did, with school desegregation and other racial issues. So he learned early on about race relations and the futility of racism.

After moving to Springfield in 1965, Flores entered the Army and shipped off to Vietnam, where certain images stick with him to this day. “It’s not a good feeling killing a human being. But as George Patton said, the mission is to go from point A to point B, and whatever gets in the way, get rid of it.”

He remembers servicemen being spit on and called baby killers back stateside, but he was more haunted by the sheer numbers of U.S. wounded and dying. “You just put that someplace, everything goes to a compartment — it’s the only way. You continue moving on. There were a lot of drugs. Many of my friends did not sleep.”

After his war experience, though, Flores wanted to focus on bettering lives, not dwelling on a war that ruined so many of them.

“Life is short, when you put it in perspective. And the time you have here, what do you do to make it better — not only in a selfish way, but for the next person?”

Specifically, his affinity with migrant farm workers that led to the development of an agency — the New England Farm Workers’ Council (NEFWC) — to help them out with various needs, from fuel assistance to job skills to education.

That agency, launched in 1971, eventually morphed into Partners for Community, a nonprofit with multiple departments under its umbrella, including the Corporation for Public Management, which seeks solutions to welfare dependency, chronic joblessness, and illiteracy, and also focuses on providing services to those with physical and developmental disabilities; and New England Partners in Faith, which seeks to provide sustainable development and capacity building for small faith-based organizations throughout New England through technical assistance and job-related training. 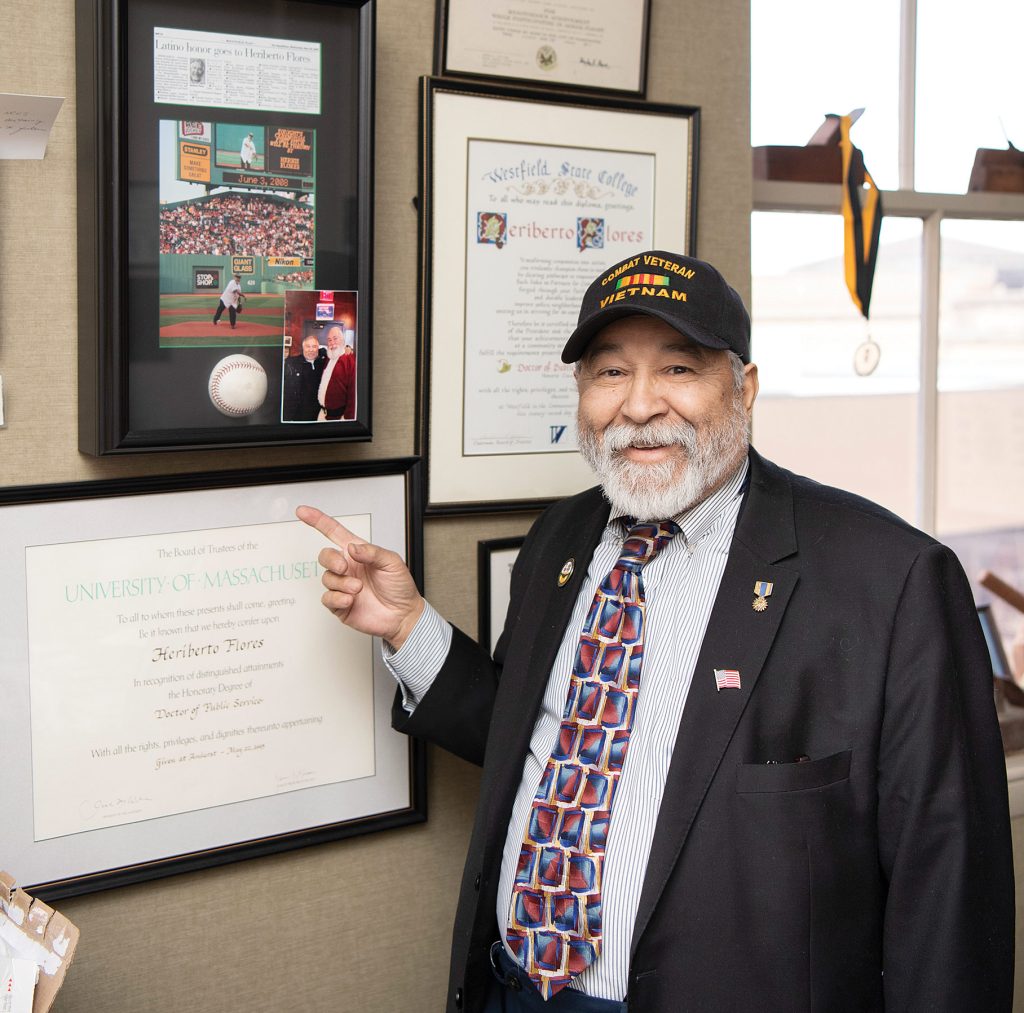 Herbie Flores’ office walls are filled with proclamations, awards, and photos of his interactions with state and national leaders.

“All those experiences, from there to here to Vietnam, helped me see that things are bad, but they’re not real bad,” Flores said. “Life is short, when you put it in perspective. And the time you have here, what do you do to make it better — not only in a selfish way, but for the next person?

“I’ve been homeless, I’ve been without food, but you move forward,” he added. “Many people get stuck in the same place, but you can’t stay stagnant.”

For helping people move forward from adversity over the past 50 years, while continually investing in the vitality of Greater Springfield, explains why Flores is certainly a Difference Maker.

Established in 1971 as a small organization to support farm workers, NEFWC has become a multi-faceted human-services agency dedicated to improving the quality of life for thousands of low-income people throughout the Northeast.

Among its chief programs are home-energy assistance for income-eligible families in Hampden and Northern Worcester counties; emergency shelter assistance for at-risk families throughout Massachusetts; employment and job training for migrant seasonal workers in Massachusetts, Connecticut, New Hampshire, and Rhode Island, as well as welfare-to-work populations in Connecticut; and youth programs providing services to at-risk, low-income youth both in and out of school in Massachusetts, New Hampshire, and Connecticut.

And its programs, both under the NEFWC name or the Partners for Community umbrella, continue to evolve.

“We have different organizations still tied up with us,” he said, citing, as one example, Gándara Center, which arose from Partners for Community because a population of Latino and Puerto Rican veterans were struggling with heroin. “We were not trained psychologists, but we wanted to help those guys. So we started bringing people in who could.”

Many of the organization’s services, like its fuel-assistance program that helps low-income households with utility bills through subsidies and discounts, and its three homeless shelters for families eligible for emergency assistance, found growing need throughout the pandemic, but a more challenging environment to deliver services.

“I brought life to this building; it was a historical building, but it was empty. I like to use old buildings because you bring back the history.”

Take fuel assistance, for example. “There are federal regulations, paperwork, we give to people who give us money. But a lot of people in state government took off and were working at home. Before, you could talk to a human being. Now, you’re not talking to a human being — they give you a number, you call it, but the telephone is ringing all the time. For days, that information wasn’t transmitted,” he recalled.

“I’d have 1,600 applications here for fuel assistance ready to go, but I can’t get to the right person,” he went on. “And it’s not just me; all the state nonprofit agencies were dealing with that. The bureaucrats went home.

In other words, he said, communication broke down just as needs were rising. “It was tough, but we survived.”

Flores knows something about need. He was intimately acquainted with poverty as his family struggled for sustenance throughout his childhood in Puerto Rico. It was there, he said, that he began to identify himself with economically deprived groups and devote himself to service on their behalf — just as his experience in the military has spurred him to stay active in veterans’ causes; he was named Springfield Veteran of the Year in 2001.

Yet, through all his work with NEFWC and Partners for Community — whose services also extend to young people through HiSET support and mentoring programs, workforce-training programs for job seekers, and programs for adults with developmental disabilities or acquired brain injury — he remains humble.

“Everything we have done … I’m the figurehead, in a sense,” he said. “I have a whole team that works with me.”

This is the second time BusinessWest has honored Flores with one of its coveted awards; he was named Top Entrepreneur for 2011 for all his community-investment work, but particularly his real-estate projects that focused on urban renewal, housing, and other forms of economic development.

These included the Borinquen project in the impoverished North End of Springfield, which involved the renovation of 41 units of low-income housing, as well as six commercial spaces. The $11 million project combined federal tax credits, private-investment tax credits, Massachusetts Department of Housing and Community Development funds, city of Springfield HOME funds, and private financing — a good example of the tapestry of players Flores must weave together to turn one of his visions into reality.

“I brought life to this building; it was a historical building, but it was empty,” he said. “I like to use old buildings because you bring back the history.”

About 35 years ago, Flores made his first forays into real estate through Brightwood Development Corp. (BDC), a nonprofit formed with the goal of providing housing and economic development on the north side of Springfield. As president and CEO of the BDC, he developed a $2.5 million shopping center, La Plaza del Mercado, on Main Street in 1995, followed by a $3 million neighborhood medical clinic, El Centro de Salud Medico Inc., the next year. That was immediately followed by a $2 million rehabilitation of blighted, multi-family houses in the North End.

A more current project, a $38 million effort to transform Springfield’s historic Paramount Theater, which opened in 1926, into a performing arts center — and the adjoining Massasoit building, which was constructed before the Civil War, into a boutique hotel — has run into debt issues and delays in recent years, but remains a significant part of Flores’ downtown vision.

In addition to his other endeavors, he is president of the North End Educational Development Fund, which administers the largest Hispanic scholarship fund in New England, providing college scholarships for underprivileged, inner-city Springfield residents — and, hopefully, starts them on their own journeys of success.

All this earned him yet another honor in 2019, the prestigious Pynchon Medal from the Advertising Club of Western Massachusetts and the Pynchon trustees. Now, being named a Difference Maker soon after NEFWC marked 50 years of service is especially gratifying.

“I feel honored and proud to have been chosen by BusinessWest as one of the 2022 Difference Makers,” he said, noting, again, that his board of directors and staff deserves much of the credit for what he’s been able to accomplish. “Our longevity and success is a direct result of their dedication to our clients and our organization. All that I have accomplished is with the assistance of those around me.”

“I needed to produce something positive, not for me or for a little group, but for all of society,” he said. “In doing that, you develop relationships.”

He’s also been willing to lend a hand — and his acumen — to other organizations. “I sit on Janis Santos’ board,” he said, referring to the recently retired leader of HCS Head Start. “It’s about the education of children. People like that ask, ‘can you give us some time and help us open some doors?’ Yes, I can.”

Or, as another example, “Sister [Mary] Caritas asked me, ‘Herbie, can you come sit on my board? I need some advice for only three months.’ And three years later, I’m still there.”

He’s still there, all right — fighting the good fight to help folks who are struggling, and raising the profile and well-being of Springfield as well.

“You might change something a little bit,” he said of his philosophy of taking on new projects. “But it’s better than nothing. If you have a vision, you have to see where it will go.”

Springfield, and its environs, are certainly better off because of the difference Herbie Flores has made over the past half-century.

“It’s our city,” he told BusinessWest. “Let’s make it better, and leave it better for the next generation.”